RESILIENCE SOARS: SpaceX just launched 4 astronauts into orbit for NASA, kicking off the longest spaceflight in US history The astronauts â€” Mike Hopkins, Shannon Walker, and Victor Glover of NASA, along with Soichi Noguchi of the Japanese Aerospace Exploration Agency â€” launched from Cape Canaveral at 7:27 p.m. ET, bound for the International Space Station.

The Crew Dragon capsule they’re riding in detached from the upper stage of its Falcon 9 rocket around 7:39 p.m. ET and slipped into orbit.

“We’re honoured to have you as our crew as we begin operational missions to the ISS. Have an amazing trip, and know that we are all for one,” SpaceX’s mission controller Jay Aranha said to the crew shortly before liftoff.

From inside the spaceship, Hopkins, the mission’s commander, said: “To all the people at NASA and SpaceX, by working together through these difficult times, you’ve inspired the nation, the world, and in no small part the name of this incredible vehicle, ‘Resilience.’ And now it’s time for us to do our part. Crew-1 for all.”

SpaceX/NASASpaceX and NASA’s Crew-1 mission launches toward the International Space Station on November 15, 2020.

The Crew-1 mission calls for the spaceship to dock with the orbiting laboratory around 11 p.m. ET on Monday, then the astronauts will live and work there for six months.

Resilience will stay docked to the ISS throughout the astronauts’ stay in space.

“It means functioning well in times of stress or overcoming adverse events,” Hopkins said of the vehicle’s moniker. “I think all of us can agree that 2020 has certainly been a challenging year. Despite all of that, SpaceX and NASA have kept the production line open and finished this amazing vehicle.” 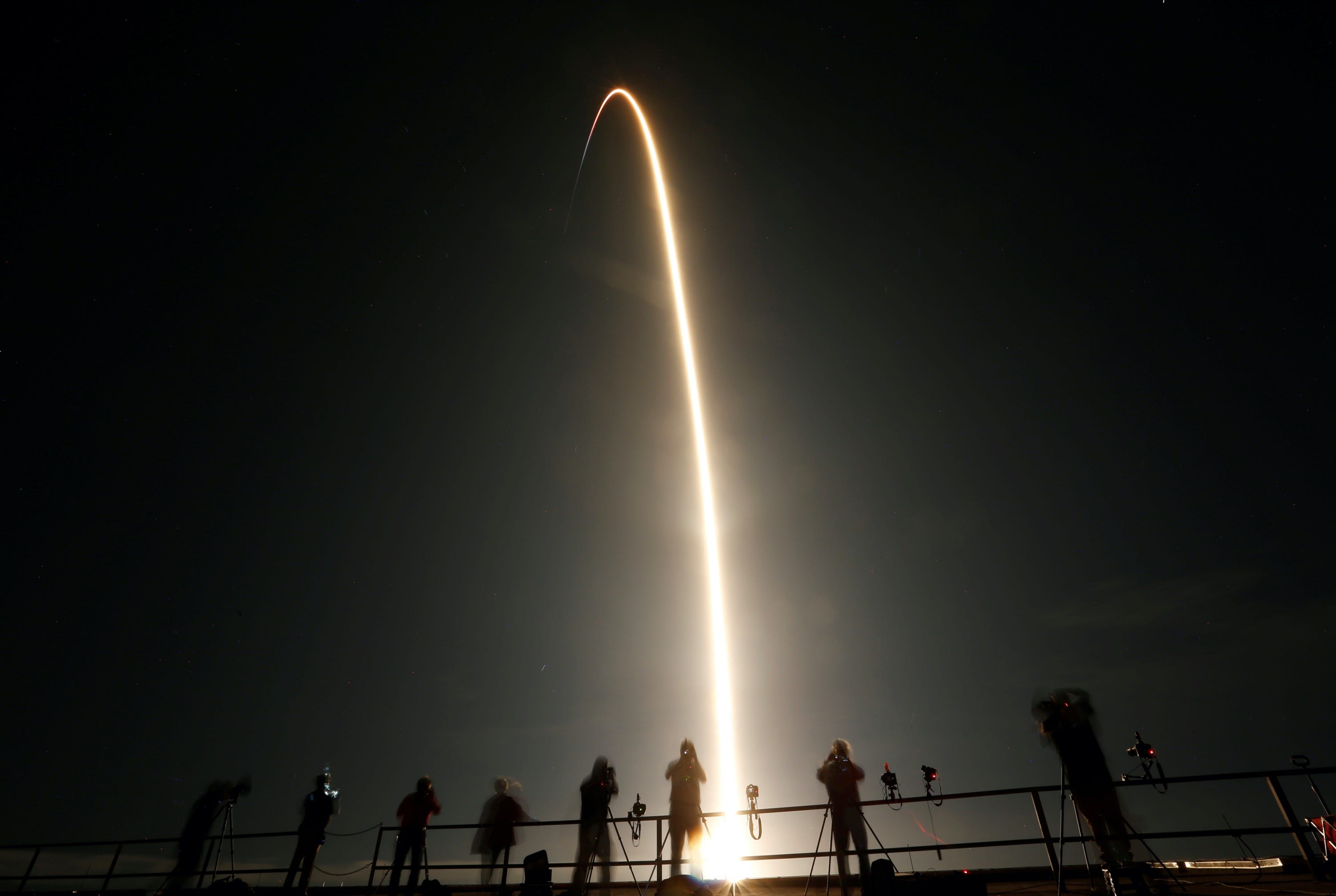 The launch had previously been scheduled for Saturday evening, but weather prompted NASA and SpaceX to delay 24 hours. On Sunday, the mission again faced 50/50 odds of unsafe weather conditions, since rain, clouds, and static electricity were closing in on the launchpad all day. But in the end, skies remained clear.

Crew-1 is SpaceX’s second spaceflight with people. The first was an experimental jaunt that flew NASA astronauts Bob Behnken and Doug Hurley to the ISS in a test mission called Demo-2 that lasted about two months. Assuming Crew-1 does indeed stay at the ISS for half a year as planned, SpaceX would smash a record more than 45 years old for the longest human spaceflight ever flown from US soil. SpaceXSpaceX’s Crew Dragon spaceship sits atop a Falcon 9 rocket in preparation for the launch of Crew-1 at the Kennedy Space Centre in Cape Canaveral, Florida, November 12, 2020.

NASA’s human spaceflight abilities were curtailed after the Space Shuttles retired in 2011. The goal of the agency’s Commercial Crew Program, which commenced around the same time, was to spur competition between private companies in order to foster a new commercial spaceflight industry.

The government has spent more than $US6 billion on the effort in total, according to The Planetary Society. That includes the development of another commercial launch system through Boeing.

NASA funded the Crew Dragon’s creation with about $US3 billion, and engineers at SpaceX designed, built, and tested it to exacting government requirements. Agency heads on Tuesday certified the system for regular flight, formally kicking off an era of commercial spaceflight for NASA that had been decade in the making.

“It’s not an exaggeration to state that, with this milestone, NASA and SpaceX have changed the historical arc of human space transportation,” Phil McAlister, NASA’s director of commercial spaceflight development, told reporters on Thursday. “I believe we are about to see a major expansion in our ability to work, play, and explore space.”

Elon Musk, SpaceX founder and CEO, thanked NASA for its support and partnership in a statement.

“This is a great honour that inspires confidence in our endeavour to return to the moon, travel to Mars, and ultimately help humanity become multi-planetary,” Musk said. 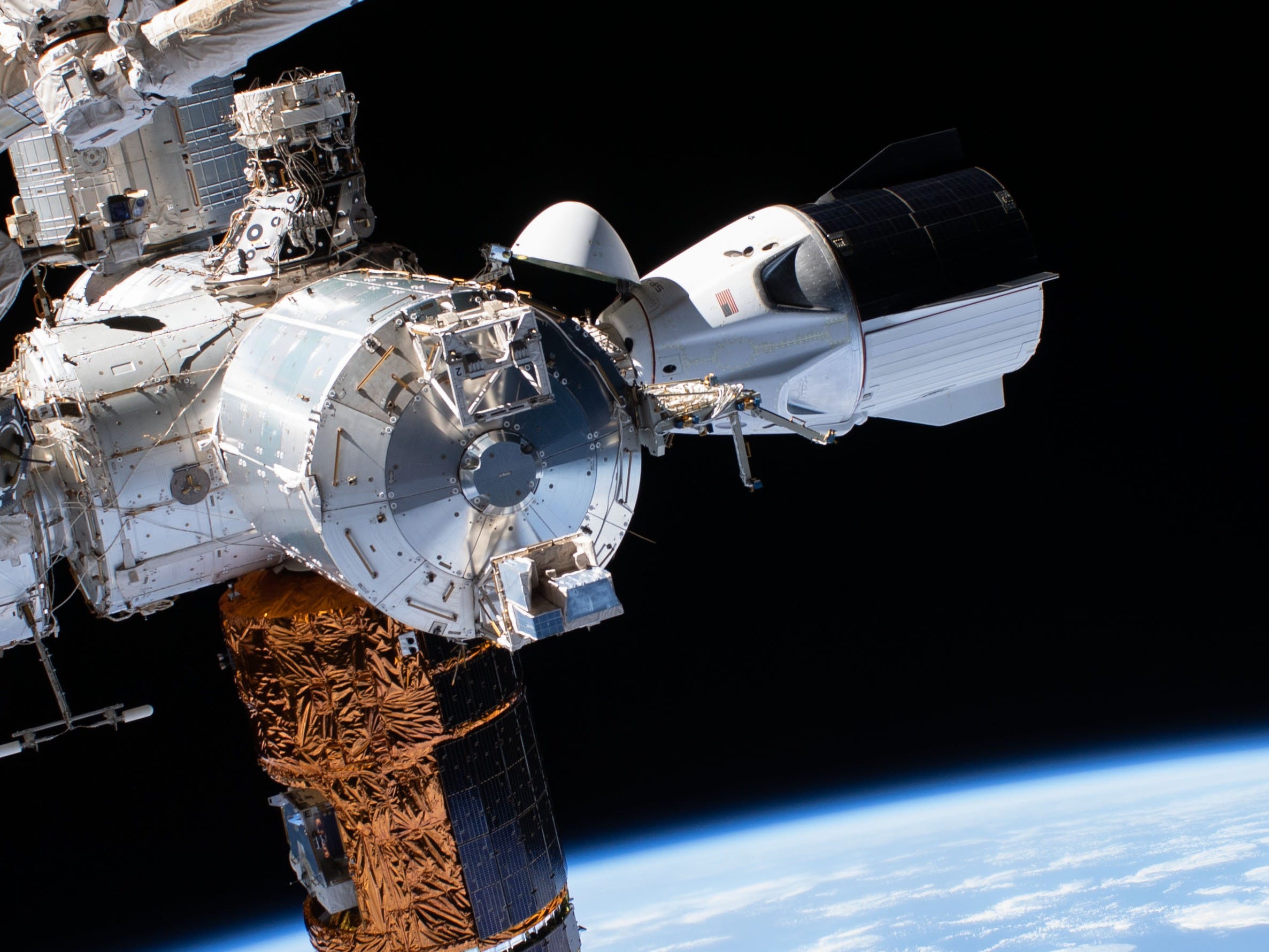 SpaceX has been sending its Cargo Dragon spaceship to the ISS on cargo resupply missions for NASA since 2012.

Combined, the two types of Dragon spacecraft are scheduled to launch into space seven times over the next 14 months, leading to an unprecedented situation for SpaceX.

That’s because each of the crewed SpaceX missions should overlap for a little while. The next astronaut launch, Crew-2, is scheduled for late March 2021. But the Crew-1 astronauts don’t plan to leave the space station until April. The same thing should happen with the following mission, Crew-3: It’s expected to launch in September 2021, so should tag up with Crew-2 in orbit.

SpaceX, meanwhile, is also hard at work on another launch vehicle called Starship. Musk hopes to launch one of the latest prototypes, called SN8, on a 9.3-mile (15-kilometre) “hop” above the company’s burgeoning development site in south Texas in the coming weeks. His plan is to begin crewed Starship launches in the mid-2020s and later start building permanent cities on Mars, perhaps in the 2030s. (SpaceX has even indicated it intends set up is own “legal regime” on the red planet.”)

When the Crew-1 astronauts are ready to return to Earth, they will climb back into their Crew Dragon capsule, undock from the space station, then blast the spaceship’s thrusters to push them toward Earth, eventually allowing gravity to pull them back down. Parachutes will slow the Crew Dragon’s fall before it splashes down in the Atlantic Ocean off the coast of Florida.

After the Demo-2 mission concluded, SpaceX inspected the toasted capsule and spotted something unusual: deep erosion on part of the heat shield.

That thermal protection system is a collection of heat-resistant tiles that line the spaceship’s underbelly. It deflects and absorbs heat that can reach 3,500 degrees Fahrenheit while the spaceship plummets through the atmosphere.

One of those tiles suffered “a little bit more erosion than we wanted to see,” Hans Koenigsmann, SpaceX’s vice president of build and flight reliability, said in a September briefing. 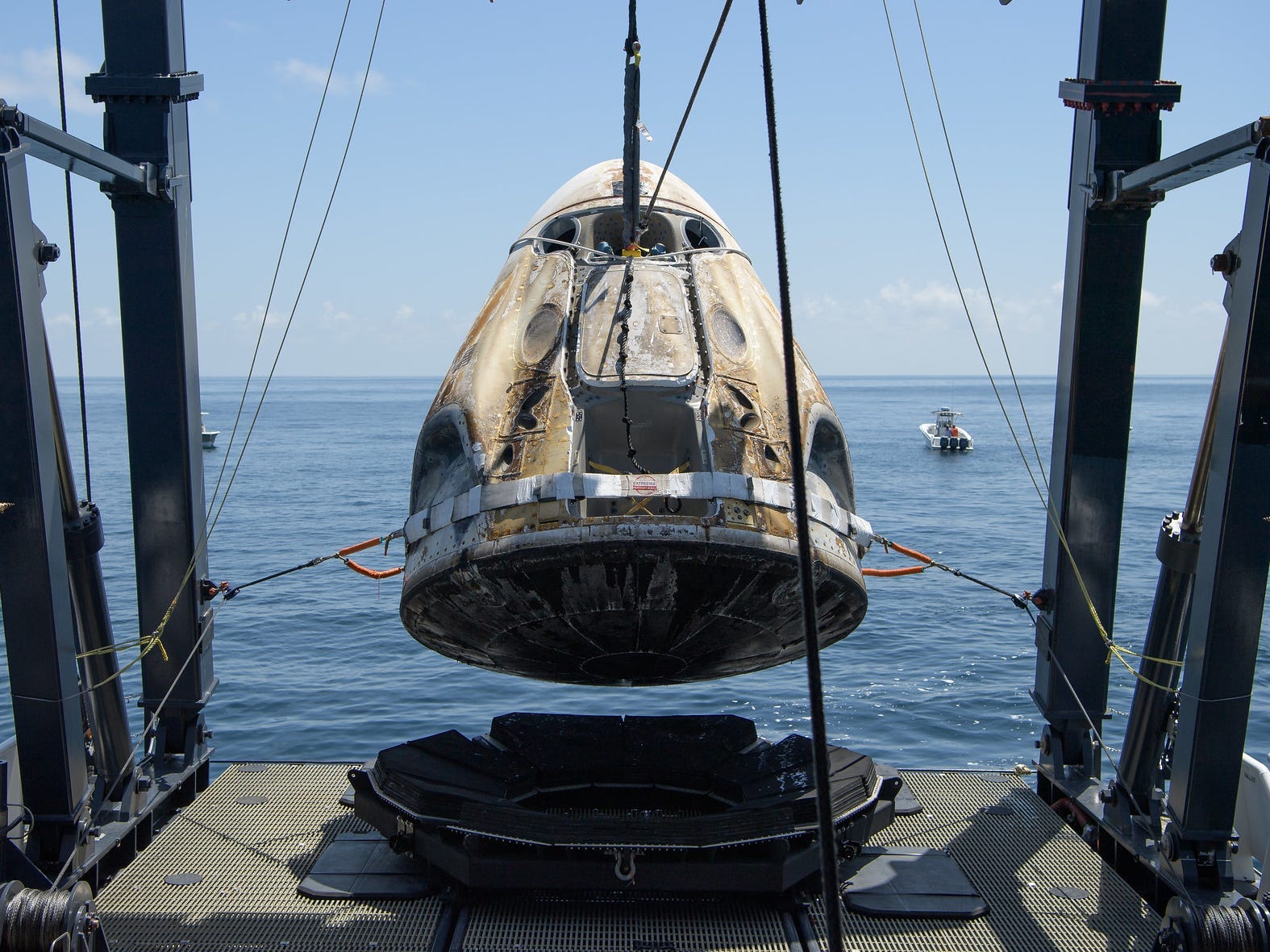 So for Crew-1, SpaceX reinforced the heat shield with stronger materials. NASA then tested five samples of the new tile in a wind tunnel that simulates the environment of reentry.

This story has been updated with new information. Susie Neilson contributed reporting.