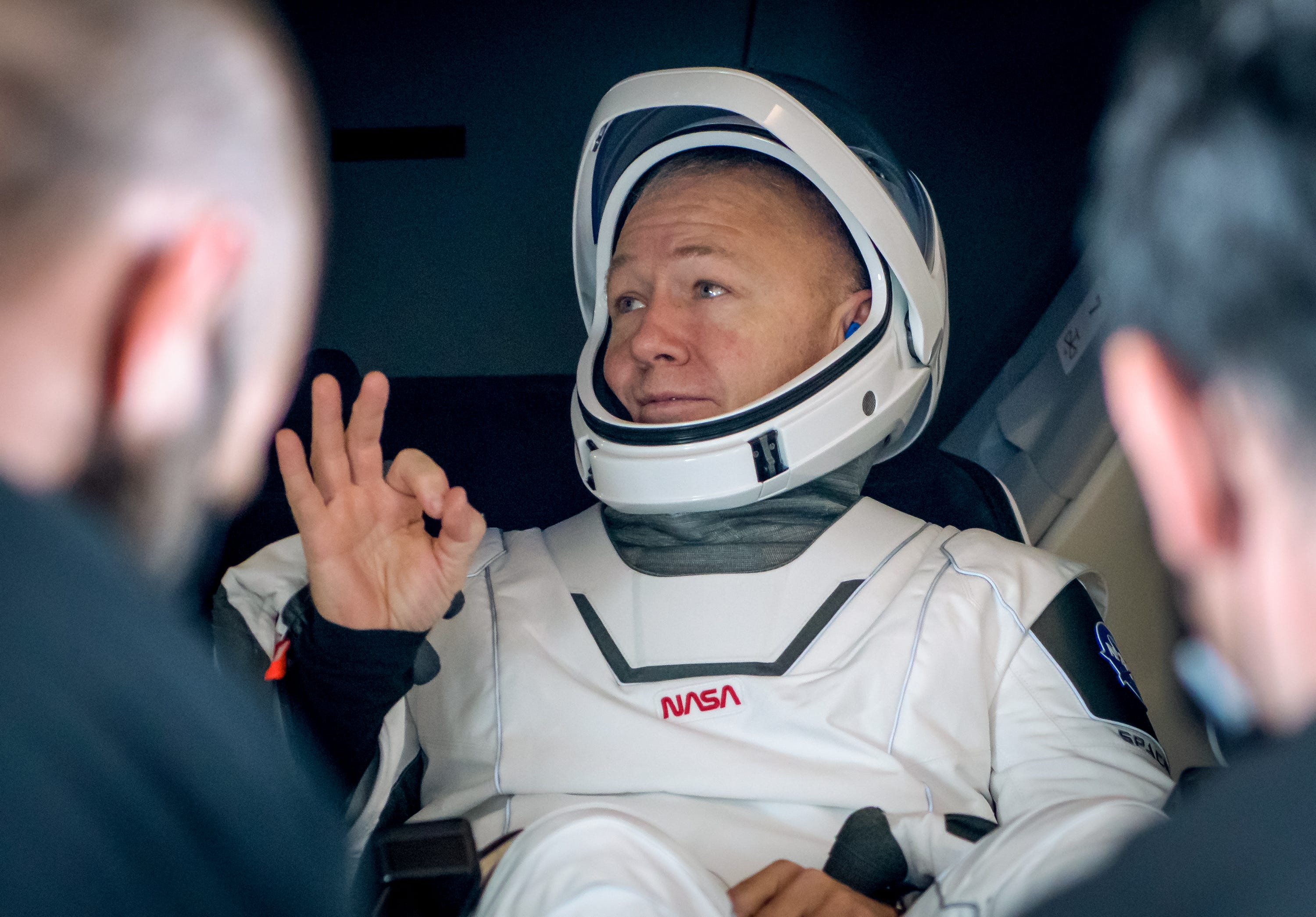 Bill Ingalls/NASANASA astronaut Doug Hurley gives the OK sign while being helped out of SpaceX’s Crew Dragon ‘Endeavour’ spacecraft in the Gulf of Mexico on August 2, 2020.

For the SpaceX and NASA officials overseeing the return of astronauts Bob Behnken and Doug Hurley to earth, success wasn’t just seeing a spaceship designed, built, and operated by SpaceX safely splash into the Gulf of Mexico. It was seeing the whole, history-making operation go off very nearly without a hitch.

“The greatest surprise is that this mission was as smooth as it is,” Gwynne Shotwell, SpaceX’s president and COO, told Business Insider in a press briefing held a couple of hours after Demo-2’s landing.

But the denouement of the 65-day commercial test mission, called Demo-2, was not without surprises – some concerning, some just curious.

Behnken and Hurley launched May 30 aboard SpaceX’s 13.5-ton Crew Dragon spacecraft and returned to Earth Sunday in its crew capsule. By completing the mission, SpaceX, founded by Elon Musk in 2002, not only checked off its first-ever flight of people, but also resurrected crewed spaceflight from US soil, ending a nine-year pause created by NASA’s retirement of the space shuttle.

NASA, which has funded Crew Dragon’s development and launches with $US2.7 billion since 2009, seemed just as awestruck as SpaceX. “It did not seem like this was the first NASA-SpaceX mission with astronauts on board,” astronaut Mike Hopkins, who’s slated to fly on SpaceX’s next Crew Dragon mission, said in the briefing.

Still, Shotwell called out some “foibles” seen during the mission, some of which were highly visible in footage of the mission, and others that were not.

“This was a demonstration mission,” Shotwell said. “This is the time that you go learn about these things, and we’ll certainly be better prepared next time.” 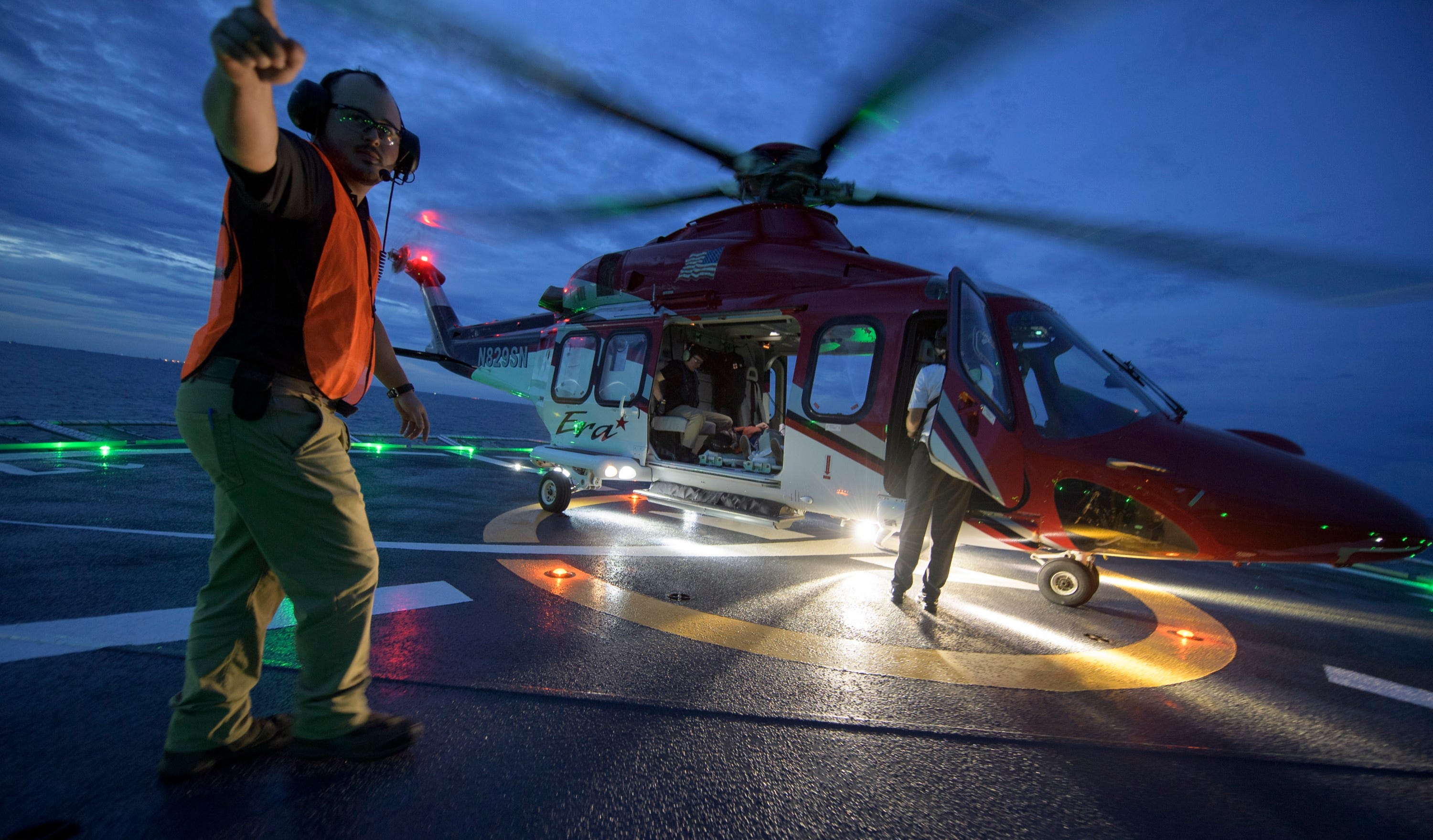 Bill Ingalls/NASANASA and SpaceX practice an evacuation onboard the ‘GO Searcher’ ship on August 15, 2019.

Once Behnken and Hurley got the OK to undock from the ISS and return home, SpaceX deployed fleets of ships into the Gulf of Mexico to recover the capsule and the men inside.

But one of its main recovery ships, called “GO Navigator,” hit a snag before it left port: Its backup generator failed.

While it didn’t materially impact the mission – the ship handled the pickup just fine with its main generator – NASA and SpaceX both want redundancy so that nothing can get in the way of scooping its finest from the sea. 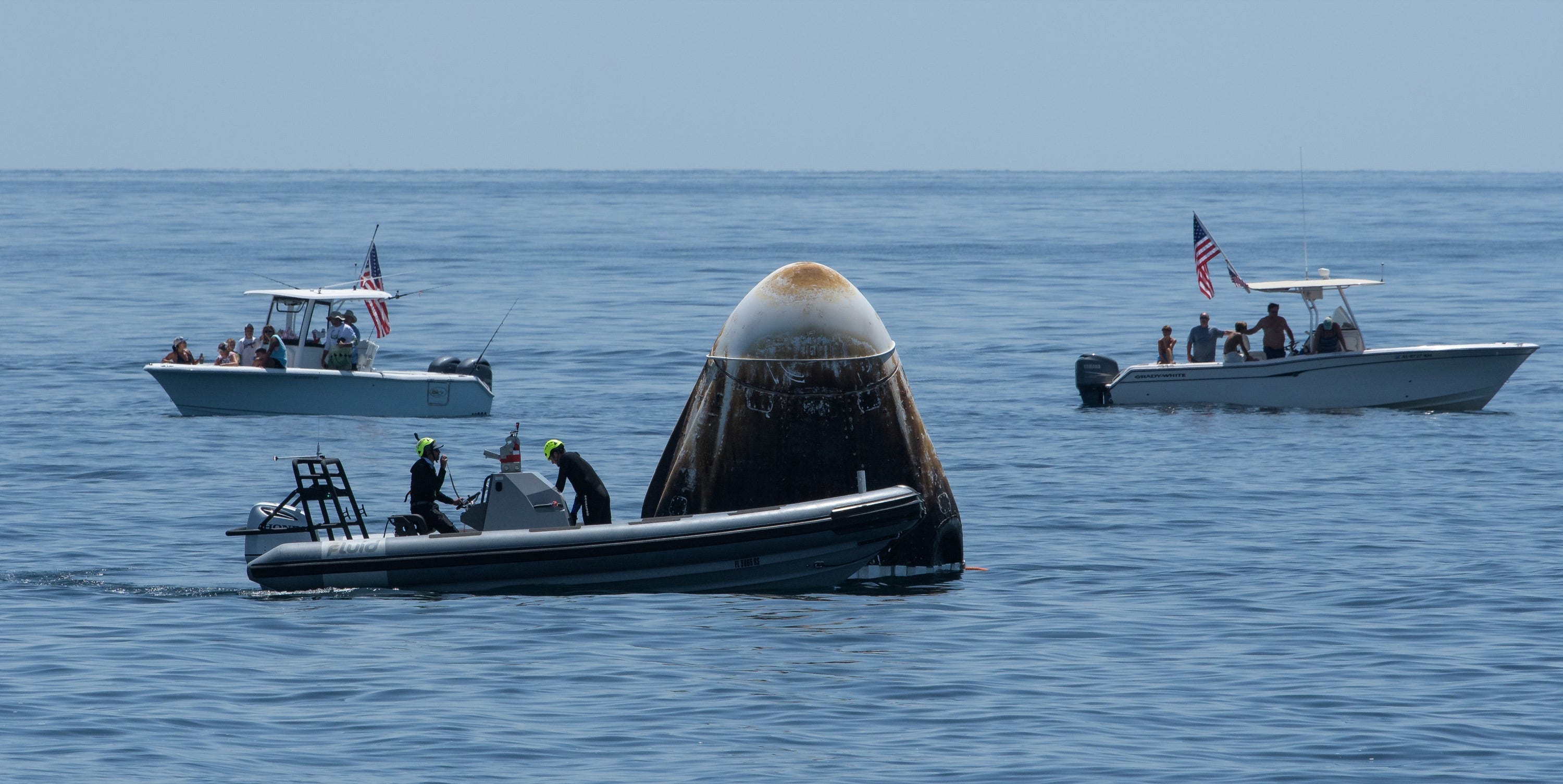 Bill Ingalls/NASASupport teams and recreational boaters arrive at the SpaceX Crew Dragon Endeavour spacecraft shortly after it landed with NASA astronauts Bob Behnken and Douglas Hurley onboard in the Gulf of Mexico off the coast of Pensacola, Florida, on Sunday, Aug. 2, 2020.

To stay in orbit – essentially continuous freefall – around Earth from 250 miles up, Crew Dragon must move at a speed of about 17,500 mph. Getting back to the ground requires slowing down, and to do that, the astronauts opened the nosecone of the ship and fired its thrusters against the direction of flight for more than 11 minutes.

The propellant that powers those thrusters is a brownish substance called nitrogen tetroxide, or nitrogen peroxide. Although the hypergolic (spontaneously igniting) fuel packs a lot of punch in a small amount of space, it is also a potent oxidizer that, if inhaled at concentrations as low as 50 parts per million, can kill a person by causing their lungs to fill with fluid.

After the Crew Dragon capsule splashed down near the coast of Pensacola, Florida, recovery crews detected some of the oxidizer outside the vehicle. So they purged the system and waited about 45 minutes for the fumes to blow away.

Steve Stich, the manager of NASA’s Commercial Crew Program (which funds SpaceX as well as Boeing, which is also planning commercial flights), said during the briefing that the detected levels were “within limits” and recovery crews could have extracted the astronauts if needed. But they decided to play it safe.

“We think there may be some mechanism where it’s getting trapped into the service section from thruster firings during entry,” Stich said. “We’ll go figure out a way to handle it better on the next flight, perhaps starting with a purge as soon as we get on the vehicle.”

Space fans who put themselves and recovery operations ‘in potential danger’

When the astronauts landed, recovery boats weren’t the only ones waiting to greet them: A flotilla of pleasure craft raced out to meet the spaceship, too.

The scene alarmed the Coast Guard and mission managers, who were aware of the dangers of toxic fumes – especially to unwary spectators.

The Coast Guard said it warned boaters multiple times ahead of the splashdown with radio alerts and physical warnings, according to a statement issued to CBS. Yet, because the landing site was in international waters, the Coast Guard lacked the legal authority and enough boats to do much about the problem.

NASA administrator Jim Bridenstine said during Sunday’s post-splashdown briefing that the crowd of boats “was not what we were anticipating.” In the future, he added, NASA will utilise more resources to clear private boats from the ocean landing area.

Behnken said Tuesday that he and Hurley “had absolutely no awareness” of the unwelcome flotilla of boaters after landing, but had a message for them.

“Just a word to the wise for folks who have ideas of coming that close again in the future,” Behnken said: “We take extreme precautions to make sure it is safe, and we do that for a reason.”

Most of the apparent issues the astronauts experienced were not nearly as serious as the toxic fumes and errant boaters, and some fell into the category of spaceflight curiosities.

For example, after undocking and flying away from the ISS, Behnken paged SpaceX’s mission control centre in Hawthorne, California for some tech support. He reported experiencing issues with an iPad Mini loaded with apps that the astronauts use as digital manuals for their spaceship and mission.

“The timeline application on my tablet gives me an error message that Safari cannot open the page,” Behnken said, noting the app said it couldn’t load the app due to not being connected to the internet.

The error appeared to be a caching issue, according to Space Explored, and occurred after SpaceX tried to beam updated mission timeline data to the tablet.

Riding back to Earth ‘inside of animal’

And while both Behnken and Hurley had each flown to space twice before Demo-2, those flights were aboard NASA’s space shuttle: a 100-ton orbiter with wings that landed on runways. It made for a much different ride than a 10.5-ton, gumdrop-shaped capsule plunging into water.

As Business Insider’s Morgan McFall-Johnsen reported, the landing experience – though they were ultimately pleased with it – caught the astronauts off-guard.

“I would say it was more than what Doug and I expected,” Behnken said in a press briefing on Tuesday. “I personally was surprised at just how quickly events all transpired.”

Behnken said the ship “came alive” and “it felt like we were inside of an animal” as it fired thrusters to keep a proper orientation during atmospheric reentry. He added: “It doesn’t sound like a machine – it sounds like an animal.”

The astronauts also said the splashdown felt “very much like getting hit in the back of the chair with a baseball bat,” Behnken said.

Though not problems per se, the astronauts’ impressions of landing will help future crews know what sensations to expect as they slow down from 17,500 mph to bobbing on the ocean’s surface.

‘You can never get complacent with a space vehicle’ 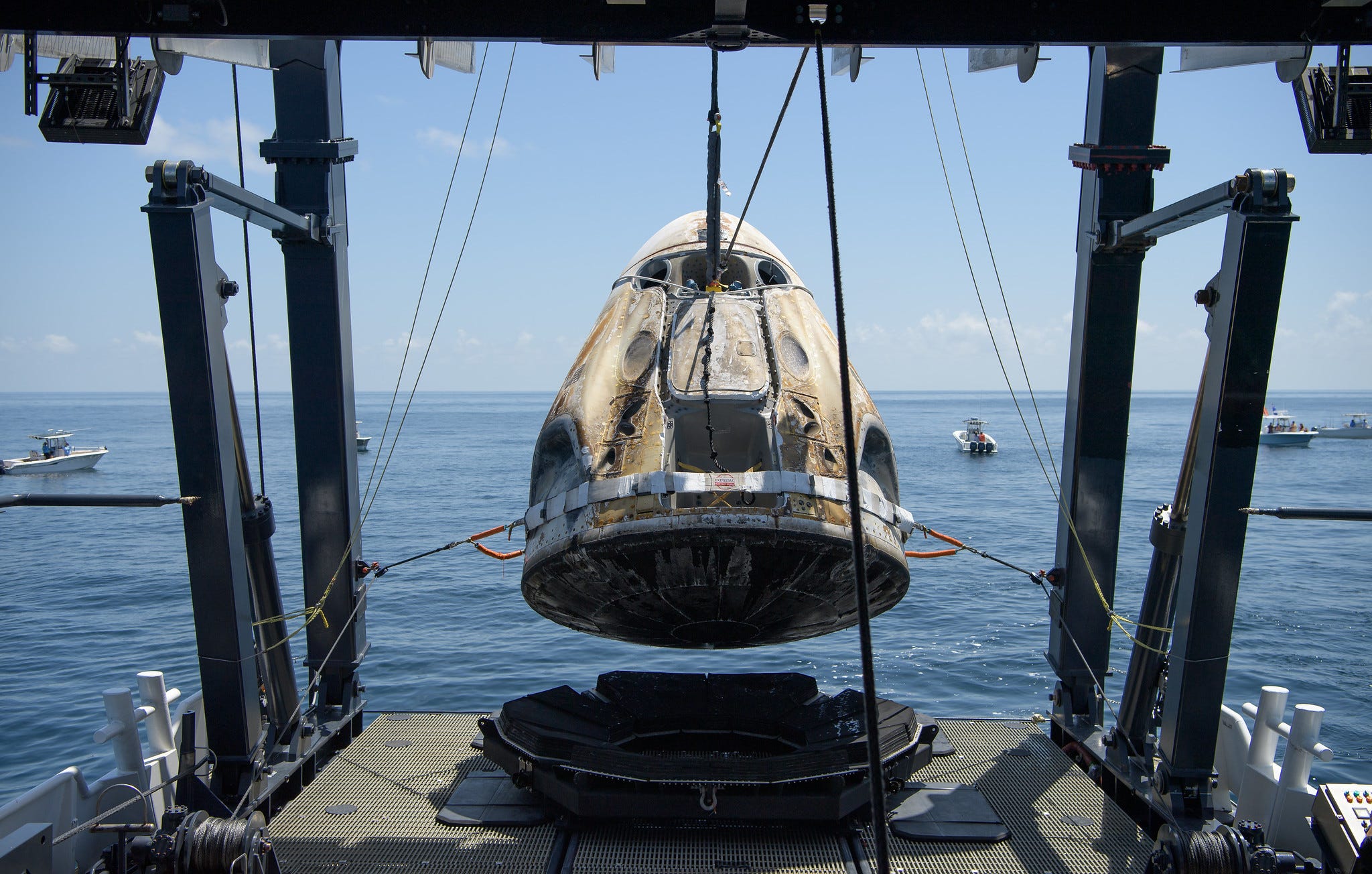 SpaceX is now poring over a mountain of mission data with NASA “just to make sure that there’s nothing untoward,” Stich said during the briefing.

He added that aerospace engineers from both sides will be paying special attention to telemetry data related to undocking, spaceflight, atmospheric reentry, and parachute performance.

The goal is to certify Crew Dragon for routine spaceflight, possibly within the next couple of months. That way operational missions can proceed, NASA can make the most use of its $US100 billion investment in the ISS, and private passengers like Tom Cruise can, too.

Based on an early look, no SpaceX or NASA officials flagged any showstoppers. Bridenstine said the spaceship was “in pretty good shape” heading into its review, which seeks to reuse the capsule on future flights.

“The space business, like a lot of those technically challenging businesses, is not forgiving,” Hurley said. “Don’t just assume, because the last flight went perfectly, that the next flight is going to go perfectly. You have to do that rigour and that analysis and that attention to detail.”

He added: “You can never get complacent with a space vehicle.”


Have a story or inside information to share about the spaceflight industry?