In a South Korean call centre, 44% of workers on one floor got the coronavirus. Their seating chart reveals how easily the virus spreads in offices. Chung Sung-Jun/Getty ImagesPeople prepare for an exam run by the General Insurance Association of Korea at Seokyeong University on April 25 in Seoul, South Korea.

As South Korea’s coronavirus outbreak ballooned in February – the country’s total jumped from hundreds to more than 6,000 over a couple weeks – health authorities there took aggressive action. They quickly implemented widespread testing and contact tracing, then used apps and text-messaging programs to alert people about potential exposure and ensure that those in quarantine were staying home.

A study of the virus’ spread in one South Korean building in March illustrates the effectiveness of those public-health interventions and highlights how easily people can transmit the virus in an office setting.

Last month, 97 of the 811 employees at a Seoul call centre tested positive for the virus. Of the sick workers, 94 sat on the same floor – the building’s 11th – and 79 were in the same section.

In an article set to be published in the journal Emerging Infectious Diseases, the Korean Centres for Disease Control and Prevention created a colour-coded seating chart of the call-centre employees on the 11th floor. The blue desks in the floor plan are where the employees who got the virus sat. 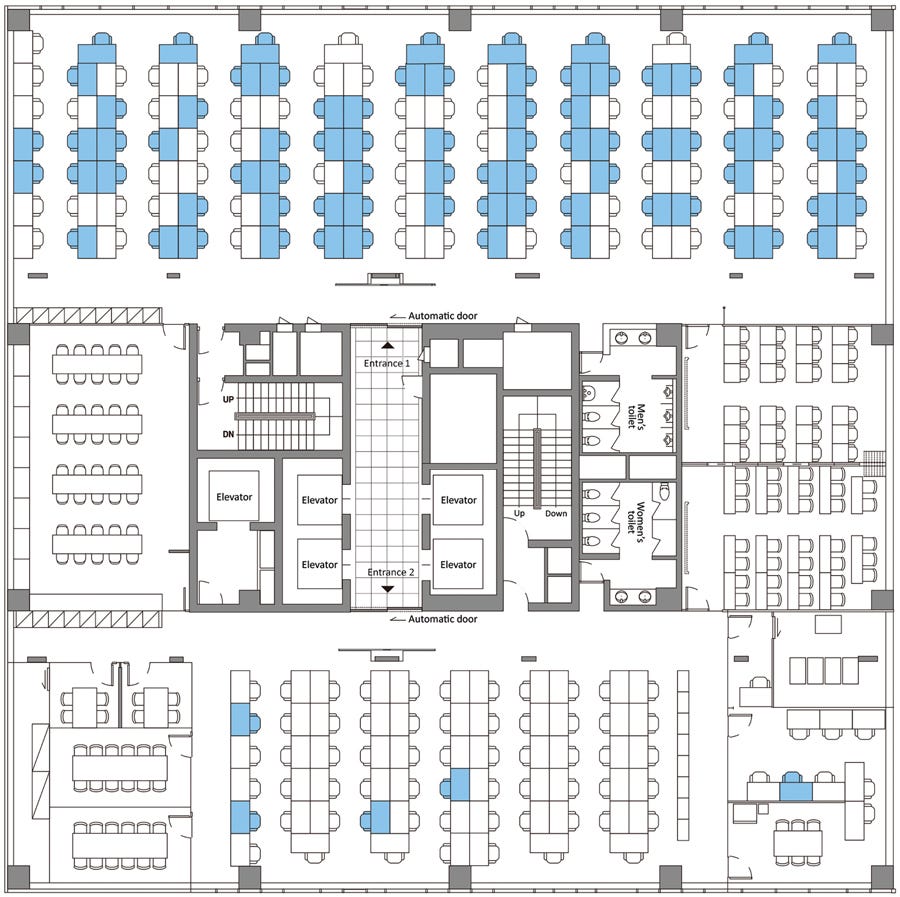 Korea Centres for Disease Control and PreventionThe floor plan of the 11th floor of building X, the site of a coronavirus outbreak in Seoul,. The blue indicates the desks of people with confirmed cases.

The diagram illustrates how offices’ inherently close quarters, especially given the long periods of time employees spend near each other, can easily allow the coronavirus to spread.

“Despite considerable interaction between workers on different floors of building X in the elevators and lobby, spread of COVID-19 was limited almost exclusively to the 11th floor, which indicates that the duration of interaction (or contact) was likely the main facilitator for further spreading,” the Korean CDC wrote in its report.

How the coronavirus spread in a Seoul skyscraper

On March 8, an employee at the Seoul call centre – the report did not identify the company by name – tested positive for the coronavirus. The patient worked on the 10th floor and never went to the 11th floor, according to the report.

What followed was standard procedure in South Korea by that point: The downtown skyscraper where the centre’s offices are closed the next day, and everyone who worked or lived in the building self-quarantined for 14 days. The high-rise has commercial real estate on the first 11 floors and residential apartments on the 13th through 18th, which meant residents and workers were in contact in the lobby and the elevators.

A team of government employees then came to test all workers and residents, along with the others in their households. Anyone who tested negative was tested again within a 14-day period. In total, 1,143 people who frequented the building were tested.

The government team sent text messages to anyone who came near the building for more than five minutes – more than 16,000 messages in total – to alert people of potential exposure and direct them to get tested.

“By testing all potentially exposed persons and their contacts to facilitate the isolation of symptomatic and asymptomatic COVID-19 case-patients, we might have helped interrupt transmission chains,” the Korean CDC wrote in the report. “In light of the shift to a global pandemic, we recommend that public-health authorities conduct active surveillance and epidemiologic investigation in this rapidly evolving landscape of COVID-19.”

Mitigating the danger of office settings amid the pandemic 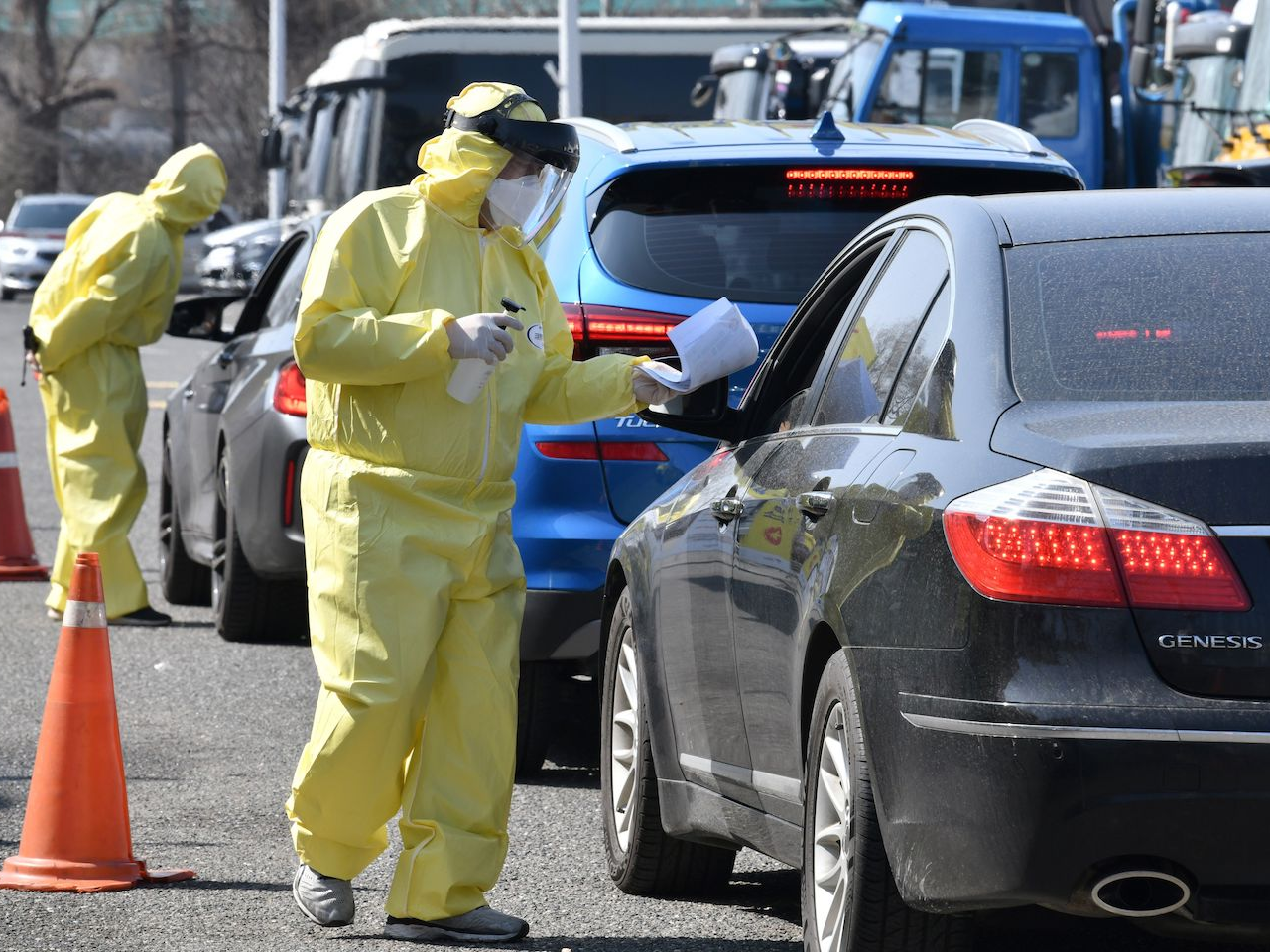 Of the 1,100-plus tests in the building, 97 came back positive. Four patients were presymptomatic at the time of testing, and four others remained asymptomatic for the entire two weeks of their quarantine. In addition, 34 of the employees’ household members tested positive.

The biggest cluster of cases was discovered among people who sat near each other on the 11th floor. Out of the 216 employees working there, 94 got sick. That means the virus’ attack rate – the percentage of a group that contracts the disease – was 43.5%.

According to a report the South Korean government published last week about its larger coronavirus-response strategy, its success in flattening the curve was primarily because of mass testing, contact tracing, and digital surveillance tools that enabled health officials to track the virus’ spread.

Unlike China, the US, and most European countries, South Korea never implemented large-scale lockdowns.

But the country did offer all residents updates about how many people were infected in each geographic area and city in real time and developed free smartphone apps that sent emergency text alerts about the situations in individual neighbourhoods.

In the case of the call centre, South Korea’s aggressive response after one worker tested positive allowed health authorities to quickly identify other cases and tell anyone exposed to self-isolate, thereby mitigating transmission.