South Korea is testing 200,000 members of a doomsday church linked to more than 60% of its coronavirus cases 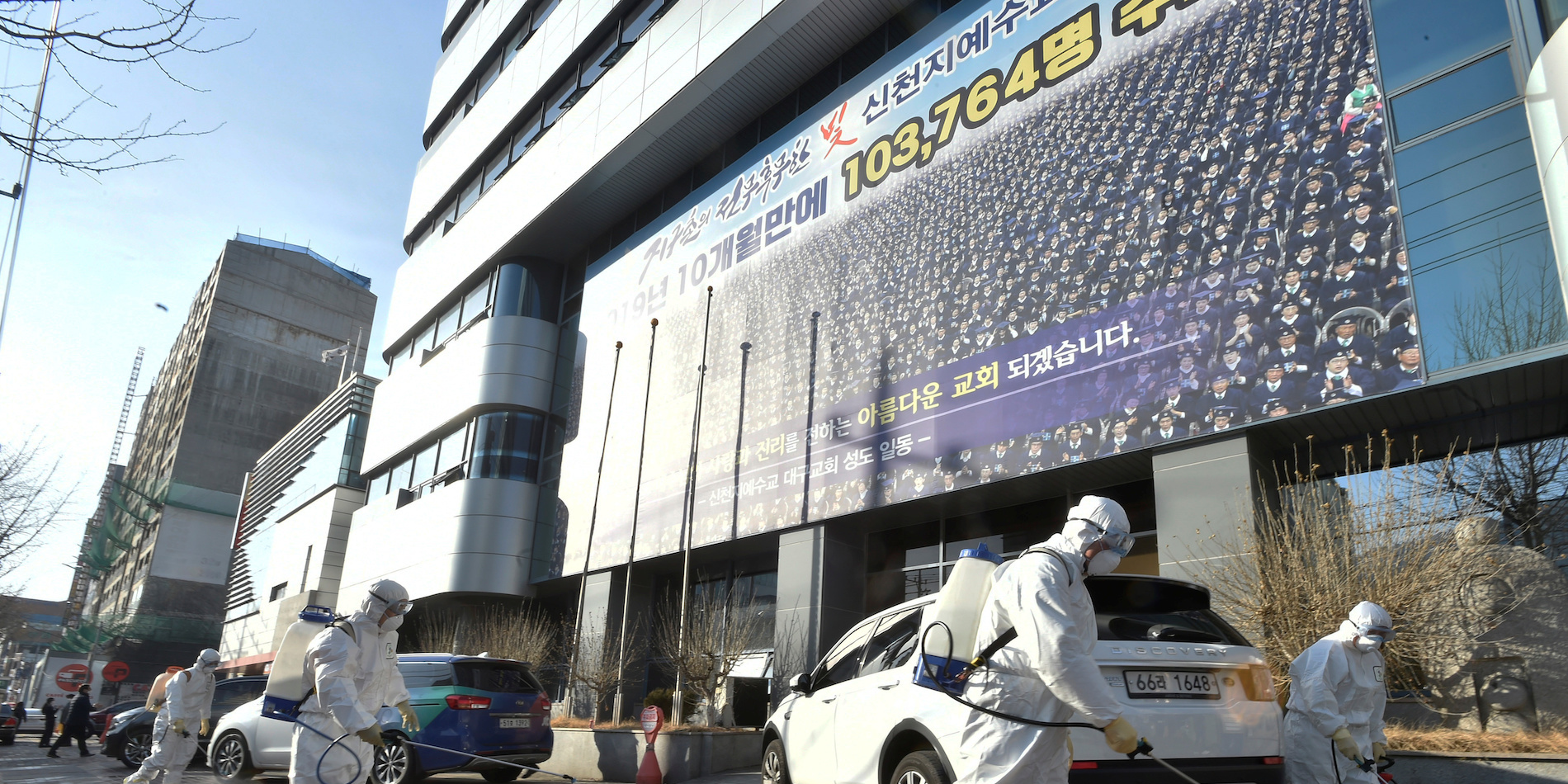 ReutersWorkers sanitizing a street in front of a branch of the Shincheonji Church of Jesus the Temple of the Tabernacle of the Testimony in the South Korean city of Daegu.

South Korea will test 200,000 members of a secretive church for the novel coronavirus after its leader agreed to hand a list of members to health authorities.

As of Tuesday, 10 people had died of COVID-19 and at least 977 had been infected with it in South Korea, making it the worst-hit nation other than China.

About 60% of those infected are members of the Shincheonji Church of Jesus, based in Daegu, the Korea Centres for Disease Control and Prevention said, according to Agence France-Presse and The Guardian.

The church was set up in 1984 by Lee Man-hee and now has nearly 250,000 members, mostly in South Korea. Its teachings explicitly predict the end of the world, in which only a few will be saved.

Lee says he is the second coming of Jesus Christ and can take 144,000 people to heaven with him on Judgment Day. ReutersEmployees from a disinfection service company sanitizing outside the National Assembly in Seoul, South Korea.

The church said it would cooperate with officials so long as the identities of its members be kept secret.

“We have been actively cooperating with the government to prevent the spread of the virus and overcome the outbreak,” Lee said, according to a separate AFP report.

“All of these will be implemented on the premise that the government takes steps to protect their personal information.”

The top health official in charge of fighting the outbreak in Daegu acknowledged on Monday that he was a member of the church.

A statement from the South Korean prime minister’s office said it was “essential to test all of the church members in order to contain the spread of the virus and relieve public anxiety,” according to The Guardian.

A former member of the cult who acted as Lee’s chief interpreter, identified by CNN by the name Kim, told the network it was no wonder the virus spread within the church. Associated PressPeople lined up to buy face masks at a store in Daegu on Monday.

“They are packed together like sardines in one area,” he said, describing group worship. “They are forced to sit line in line, and your knees will literally be touching the other person’s knee.”

He added that members were barred from wearing face masks on the grounds that doing so was disrespectful to God. He said members could not miss church for medical appointments or illness.

As Business Insider’s Rhea Mahbubani reported on Monday, the Korea Centres for Disease Control and Prevention says a 61-year-old woman was a “super-spreader” in the church.

More than half a million South Koreans have signed a petition calling for the cult to be disbanded, according to The Korea Herald.

On Friday, South Korean Prime Minister Chung Sye-kyun said South Korea had failed to stop the virus from spreading across the country and officials had begun to focus on containment.

Daegu’s 2.5 million residents have been asked to stay at home, as Business Insider’s Sinéad Baker previously reported. Preschools have been closed, and the military has stopped drafting people from the city.

“In Daegu, the number of new cases that are being confirmed by tests is quite large, and if we fail to effectively stem community transmissions in this area, there would be a large possibility (that the illness) spreads nationwide,” South Korean Vice Health Minister Kim Gang-lip said Monday.

Worldwide, the coronavirus is approaching the definition of a pandemic, according to the World Health Organisation.

A day-by-day breakdown of coronavirus symptoms shows how the disease, COVID-19, goes from bad to worse