One tweet, 94 angry replies, Dawn Staley's ire, and a Sports Illustrated article: How a story about women's college basketball made me South Carolina's public enemy No. 1 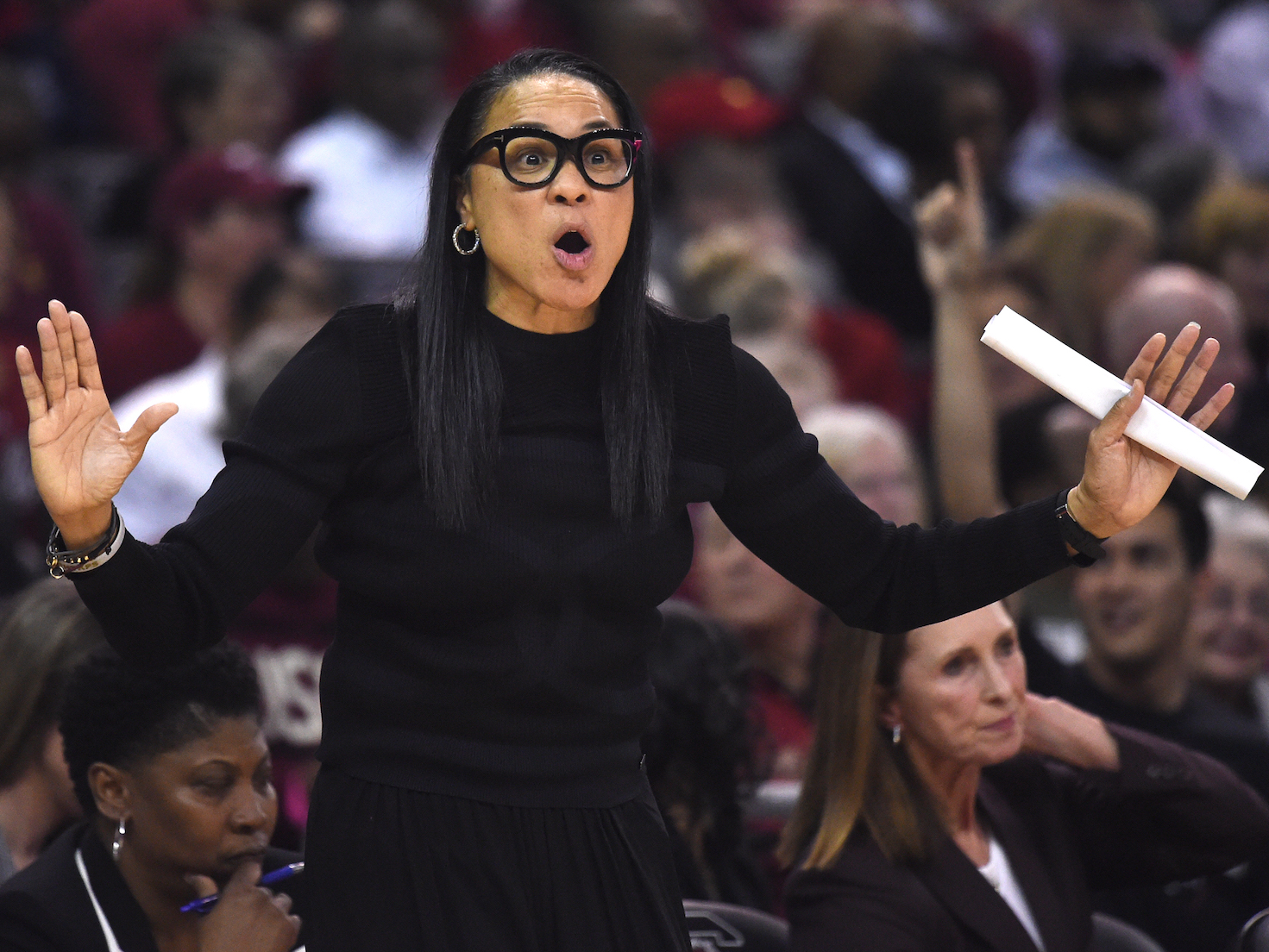 I haven’t stepped foot in South Carolina in years, and yet I’ve managed to become the most-hated person in The Palmetto State over the past week.

This is the story of how publishing one article about women’s college basketball has resulted in online threats, a Sports Illustrated piece, and one of the best coaches in the game seemingly implying that I should be admitted to a psychiatric hospital.

But before we get into the intricacies of how I garnered the disdain of the notoriously raucous South Carolina women’s basketball fanbase, let me set the scene a little bit and give you some background into how I arrived in this line of work.

I was a gangly, baby-faced freshman at Duke University trying to parse out where I belonged on campus when I stumbled upon the opportunity to write for the sports section of the Duke Chronicle – the independent student newspaper on campus. 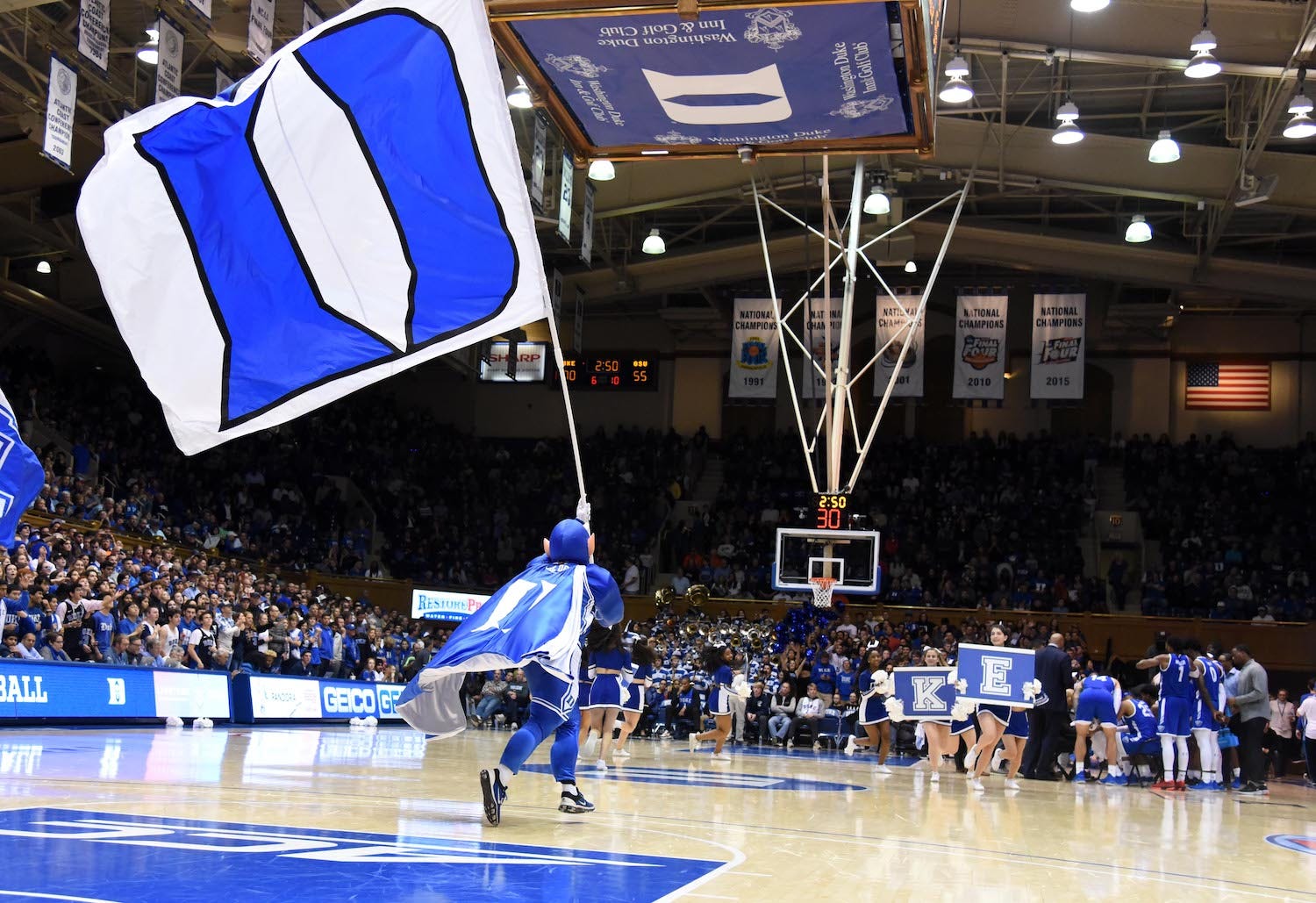 As a lifelong athlete and avid writer, spending my days courtside at Cameron Indoor Stadium and my nights in The Chronicle office at 301 Flowers was a dream come true. At the time, I had no plans for this hobby of mine to blossom into a career – I was just interested in sports writing for the sake of catching games and crafting features.

These were the circumstances under which I first interacted with Dawn Staley, the six-time WNBA All-Star, three-time Olympic gold medalist, and then-rising star at the helm of South Carolina’s women’s basketball. And yes, she’s the one who said writers like me should be “admitted” during a press conference – but we’ll get to that later.

The top-ranked Gamecocks came to Durham on December 7, 2014

I was sitting courtside at Cameron Indoor Stadium, and I was pumped.

Mere weeks prior, I had been named one of The Chronicle’s Duke women’s basketball beat reporters for the 2014-15 season. Soon I would be jetting across the country to follow Joanne P. McCallie’s Blue Devils into matchups against storied programs from South Bend, Indiana, to Storrs, Connecticut.

But on this particular Sunday afternoon, I’d bear witness to the greatness rising out of Columbia, South Carolina.

To this point, I had only covered two Duke women’s basketball games – an exhibition contest against Limestone and the team’s home opener against unranked Marquette. The top-10 matchup brought with it a sense of anticipation, the likes of which I had never personally felt surrounding a women’s sporting event.

And somehow, the game managed to live up to the immense hype.

Down by one with 10 seconds remaining, the top-ranked Gamecocks earned one last shot at keeping their undefeated season intact thanks to the ultimate hustle play from South Carolina’s Khadijah Sessions. The junior guard stripped the ball away from Blue Devil sharpshooter Rebecca Greenwell and called a timeout with time for one final play.

Staley drew up a play for her veteran leader in preseason All-American Tiffany Mitchell, but instead, the heroics fell into the hands of then-budding star and current WNBA All-Star A’ja Wilson. In her eighth game for the black and red, the 6-foot-4 freshman gobbled up the rebound from Mitchell’s miss and emerged through traffic to put the ball off the glass and in the basket with 1.8 seconds remaining. 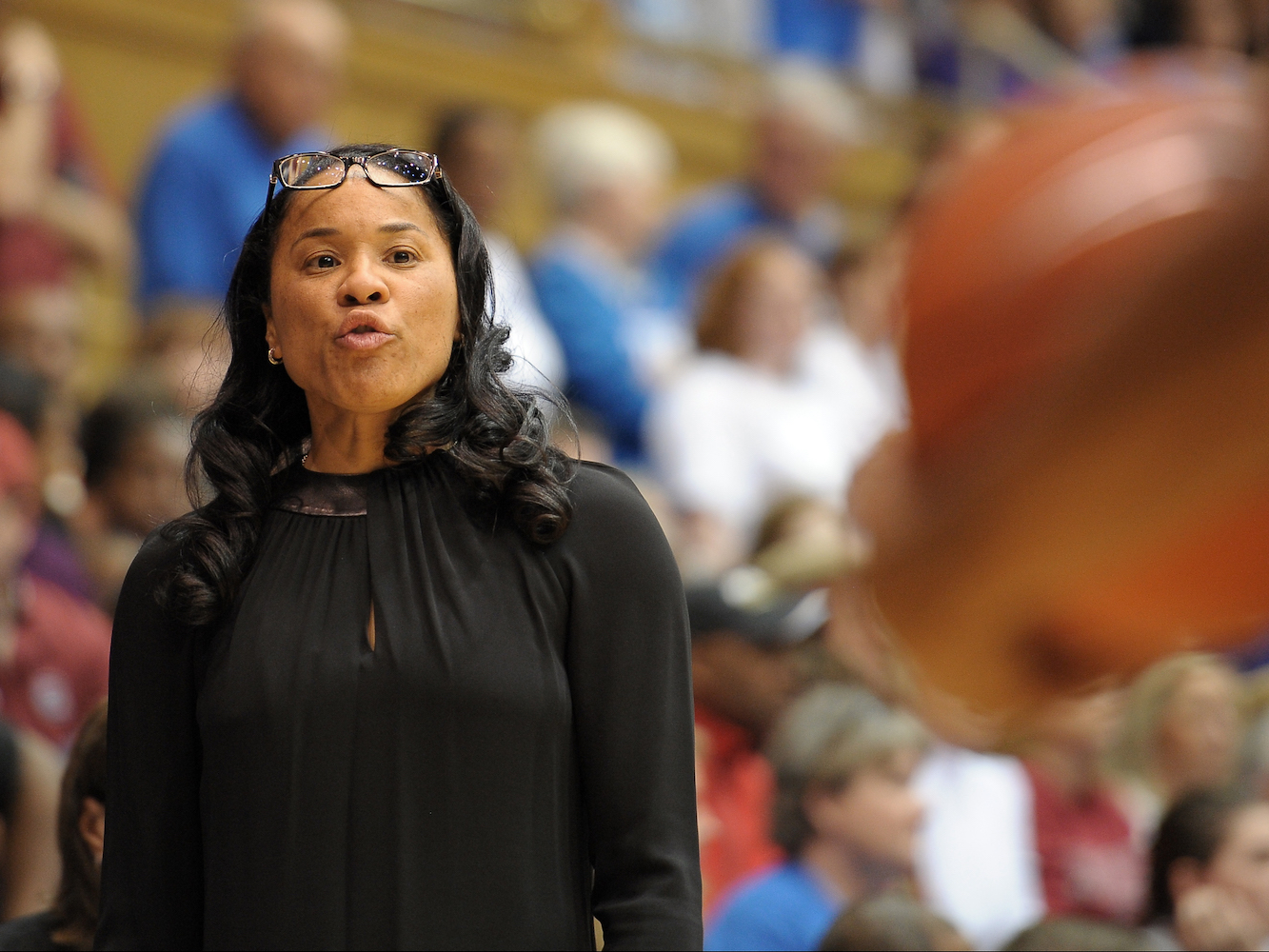 Lance King/Getty ImagesDawn Staley interacts with a referee during a December 2014 game at Cameron Indoor Stadium.

I was reeling from the incredible contest that had just unfolded in front of me – which, to this day, rivals Grayson Allen’s 2016 buzzer-beater to top No. 7 Virginia as the most exhilarating game I’ve had the privilege of covering in-person. Still, I remember walking to Cameron Indoor’s media room for the postgame press conferences with one thought rattling around in my head.

“Dawn Staley is building something special in South Carolina.”

It wasn’t just the team’s stellar play that caught my attention. Staley’s ability to rally her squad with a steely, confident demeanour was evident from the jump. The Gamecocks five consecutive Sweet 16s in the seasons since and 2017 national title are a concrete testament to her efficacy. 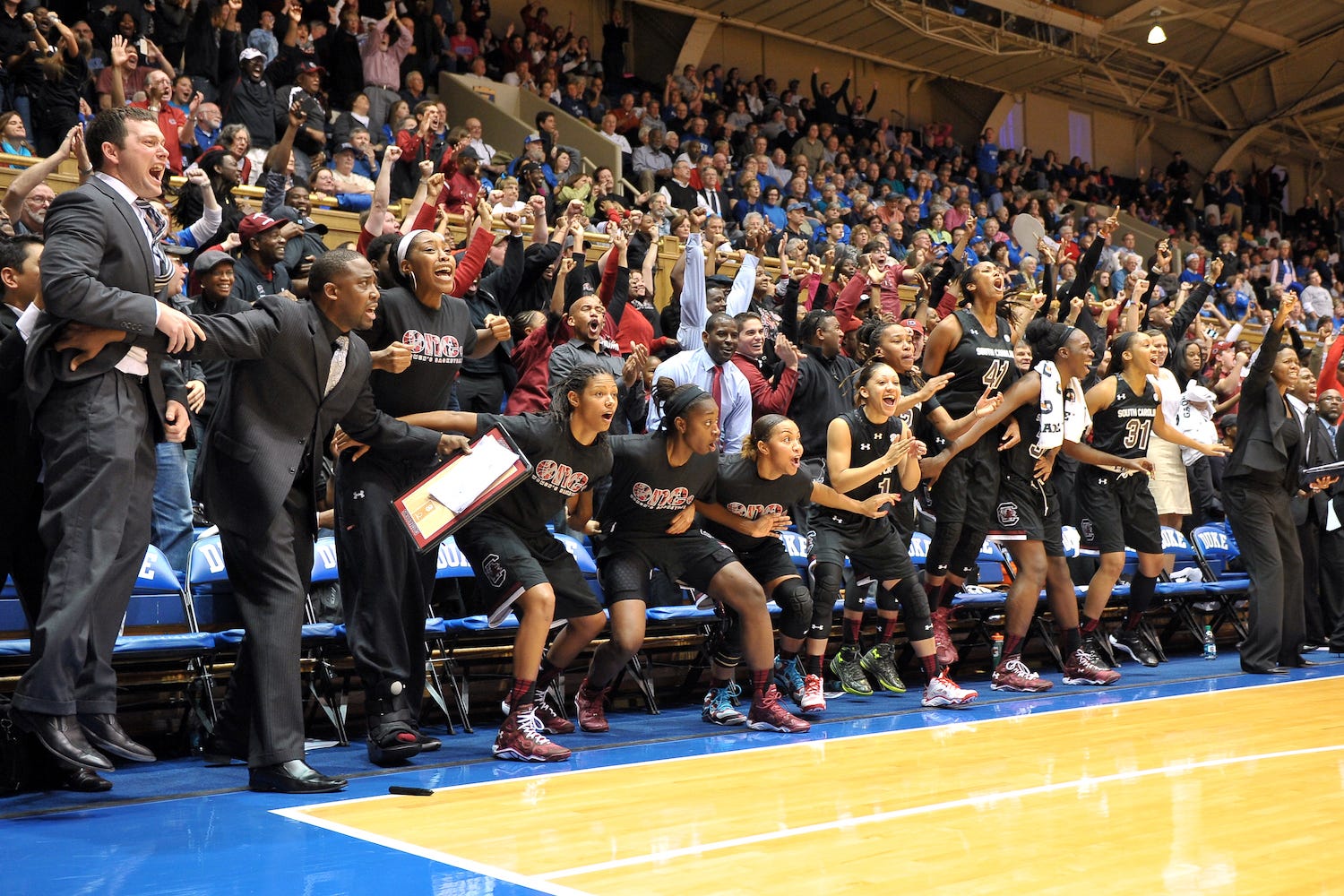 Lance King/Getty ImagesSouth Carolina fans were out in full force that day.

“I take my hat off to our team who just fought and fought and had so much resolve to getting it done,” Staley added. “With a win like this, this is huge… It’s going to pay big dividends down when you’re looking at NCAA tournament time. This is huge.”

Equally impressive from my vantage point was the vast turnout of Gamecock die-hards for an early-season game played some 215 miles from their home base at Colonial Life Arena. According to Staley, busloads of South Carolina fans had taken the roughly four-hour drive north to witness the team’s victory in-person – and they were LOUD.

I had no idea that, four years later, those same fans would be directing that energy – this time, negative energy – at me.

I wrote an article and South Carolina fans weren’t pleased

In anticipation of the upcoming NCAA Women’s Basketball Tournament, I wrote a story titled, “March Madness is approaching – Here are the 15 biggest names to look out for in the 2020 women’s NCAA tournament.” It seemed fairly benign and generated little interest most of the first day.

That night, my cell phone began incessantly buzzing with Twitter notifications. South Carolina fans began flooding my mentions over the article, which I initially found puzzling because I hadn’t mentioned their team a single time in the piece.

But that’s precisely why the Gamecocks were circling. 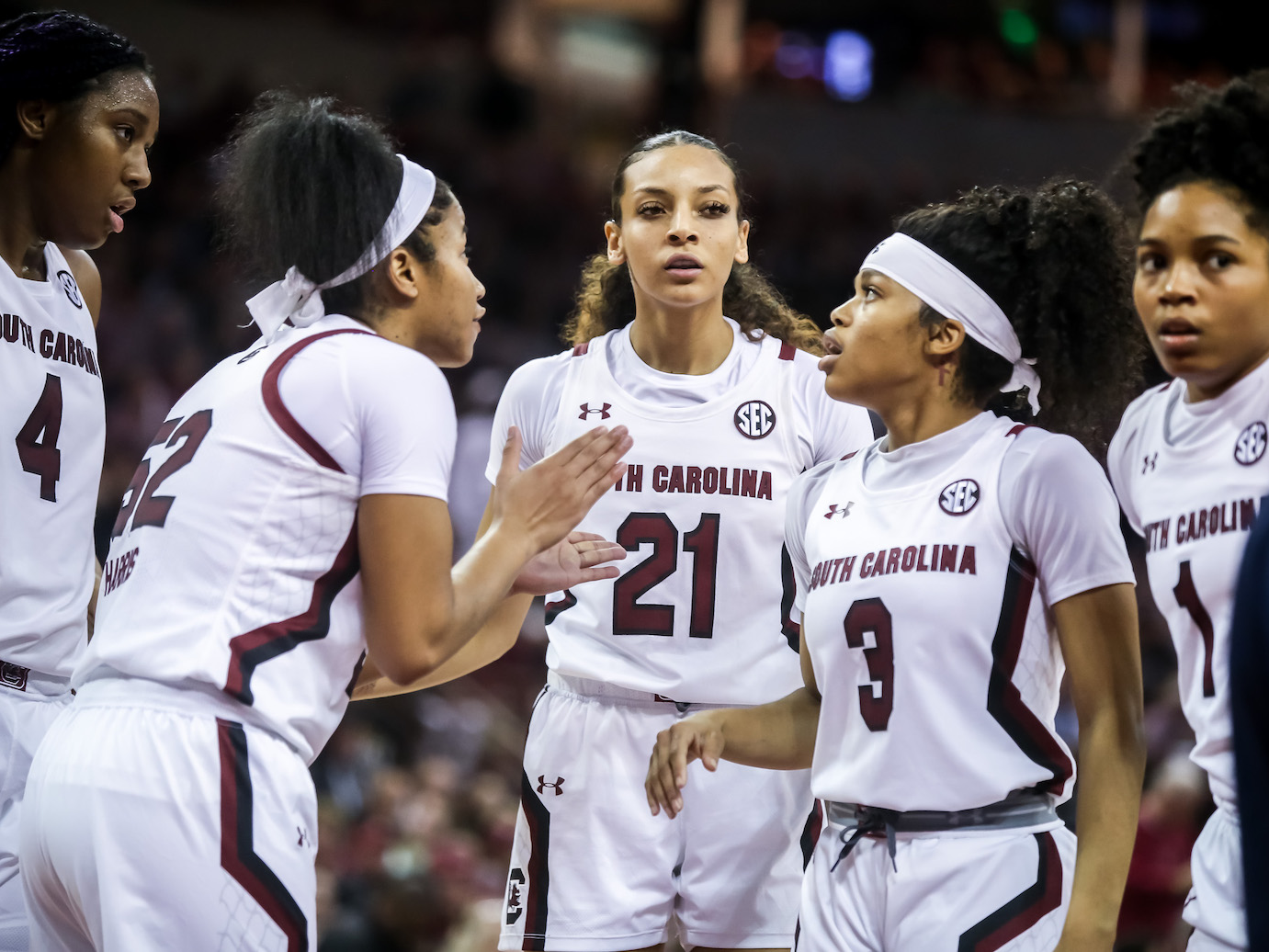 Jeff Blake-USA TODAY SportsNo single Gamecock star carries the team. That’s what makes Staley’s squad so lethal and — I’m not afraid to say — the team to beat in the NCAA.

The South Carolina women’s basketball Twitter fandom believed I overlooked the team’s stars – namely freshman standout Aliyah Boston and senior Tyasha Harris – in not including them on the list I had published some 12 hours earlier. I’d have to either be “totally uninformed or deliberately obtuse” not to think they’re among the best players in the country, according to one Twitter user.

It turns out I’m neither.

I made a deliberate decision to not include any of the Gamecocks’ leading scorers in this story because:

The next day, people were still launching sexist,profaneinsults in my direction on Twitter. They questioned my intelligence and called on my alma mater to take back my diploma. Worst of all, they flooded my inbox with threats and demands for an apology.

And they weren’t the only ones.

Dawn Staley appeared to suggest that I need to get “checked quickly, and admitted somewhere” during a press conference

During her postgame press conference after the Gamecocks took down the Texas A&M Aggies on Sunday, Staley took a moment to address “any media person that decides not to include us in conversation talks about best teams in the country.” She then alluded to getting them psychiatric help.

WATCH: @dawnstaley got just a little spicy today talking about her team doesn't get talked about enough by the national media.

"Any media person that decides not to include us in conversations about best teams in the country, we need to get them checked quickly." pic.twitter.com/PGZ8ZiYh2k

Though Staley didn’t mention me by name, the timing of her tirade indicates that she was directing her ire at me. Frankly, I don’t take issue with this – aside from the obvious point that discussing mental illness in this way is trivializing, but I digress. If arguably the greatest college basketball coach currently in the game chooses to villainize me as a way to motivate her team, I’m all for it. Whether the anger is warranted or not, inventing slights is what coaches do – just look at Clemson Tigers head football coach Dabo Swinney.

My only caveat here is that stoking anger at journalists is a dangerous practice, particularly in this day and age. Staley has a significant platform, and there are people who both take her word as gospel and have no inhibitions about issuing death threats. I have received them before, as have many of my colleagues.

That’s why the next piece of this saga made me so angry.

In a story for Sports Illustrated, a beat writer for the team wrote that despite consistently taking down their competition throughout the season, “the Gamecocks seem to find themselves in a different battle; one for respect from national media.”

The piece served as nothing but fodder for the aggrieved South Carolina fans crying “disrespect” despite their team holding the top spot in both the AP Top 25 Poll and the Coaches Poll for four weeks running. But more significantly, this article had the added effect of reinforcing the aggressive behaviour displayed online by some of the more extreme “fams” – as Gamecock fans refer to themselves. 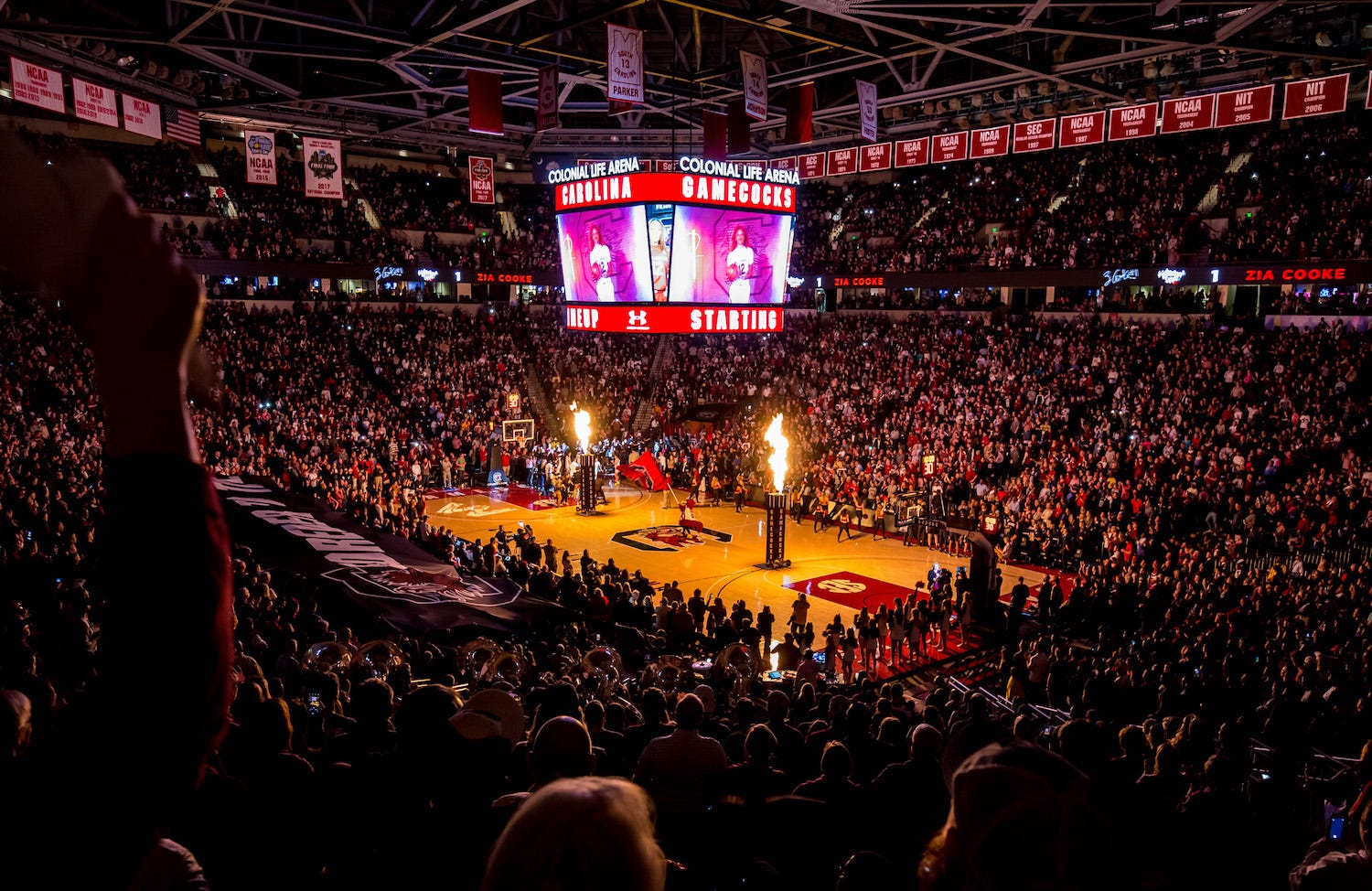 The world is an increasingly dangerous place for journalists. I am shocked that, as a journalist, the author of the Sports Illustrated article did not take a moment to consider the weight of their words or the potential ramifications of their message.

They should know better.

Fortunately, I have thick skin and confidence in my abilities as a sportswriter. I’m also incredibly lucky that none of the threats sent my way were considered consequential enough to warrant serious concern this time around. Still, I’d like to use this opportunity to issue a call to action: think twice before harassing people with whom you disagree online. There’s a person on the opposite end of the screen with feelings, a pulse, and family worried about their physical and emotional well being.

And if you are fortunate enough to have a platform that garners significant attention, consider the power of your influence before you fan the flames.