Two vacationing families got stuck in South Africa after the country went into lockdown. Here's the uplifting story of how a local wine farm came to their rescue. 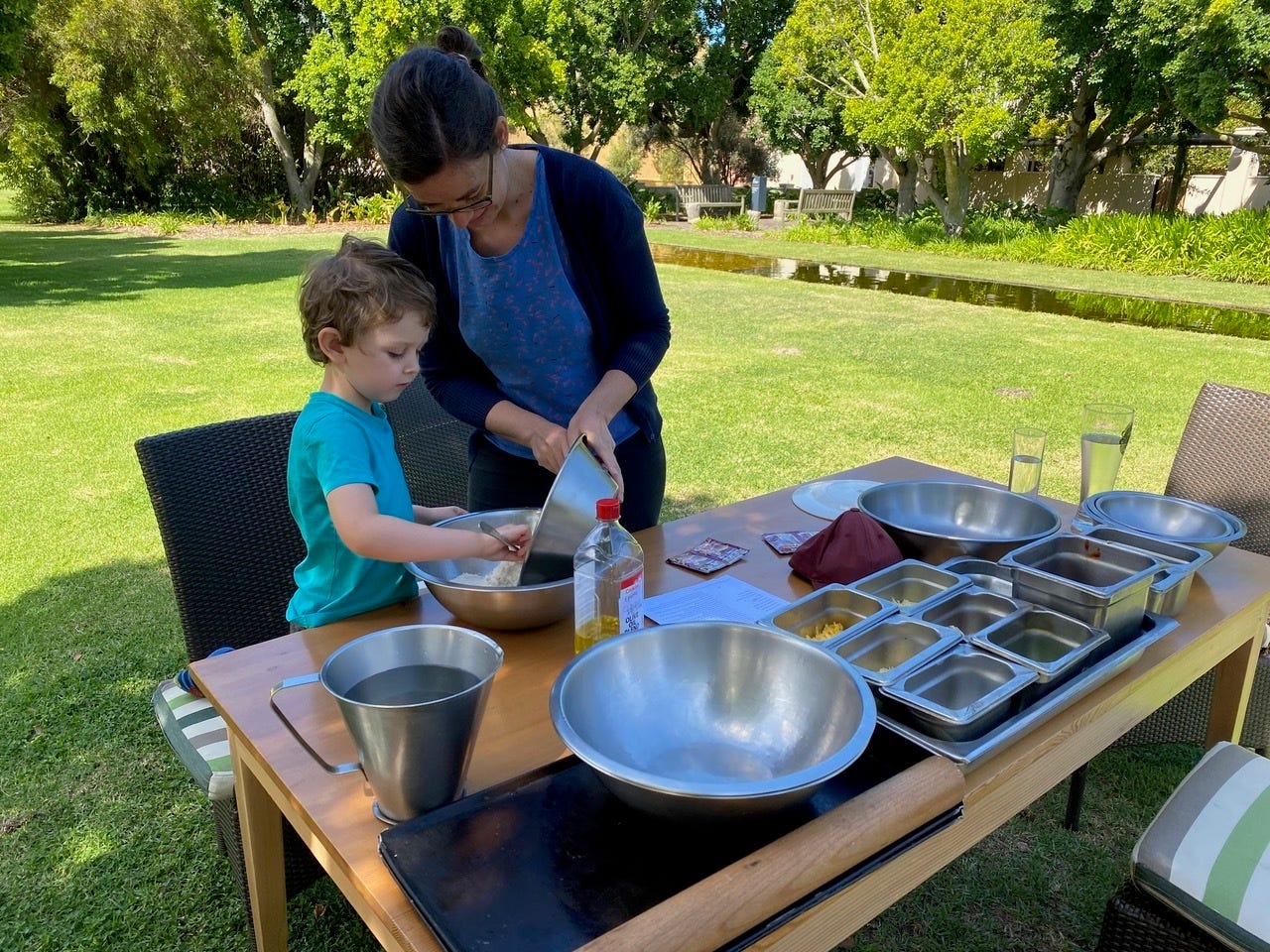 Spier Wine Farm was going to be the cherry on top of Anna Punke-Dresen’s family trip to South Africa. This luxe wine-farm hotel (one of the oldest in South Africa) was the final stop before she, her husband, and their four-year-old son Oskar ended their dream trip and flew back home to Germany. Like most things during March 2020, that simple trip quickly became chaotic.

On March 23, South African President Matamela Cyril Ramaphosa announced a strict 21-day lockdown to curb the spread of the coronavirus.

Employees at the wine farm helped Punke-Dresen and nearly 100 other guests book travel home before the lockdown went into effect at midnight on March 26. Punke-Dresen’s family booked a return flight, and could finally breathe easily knowing they’d get out just in time. But then, their flight was abruptly cancelled.

This young family was suddenly stuck at the wine farm, alongside an 80-year-old couple from the UK — all the other guests had left.

At the same time, the wine farm was going through its own internal crisis. Cancelled reservations, weeks of running the hotel at a third of its capacity, and a shuttered wine revenue (the lockdown meant no alcohol sales) had the wine farm losing money by the minute. But that didn’t stop its general manager, Joep Schoof, from stepping up and doing what he felt was right.

“We woke up in a lockdown on Friday [March 27], and that’s when we started to transition from being an operating hotel to more of a scenario where our guests were becoming our family members,” Schoof said.

“It’s not a normal economic situation, and at some point you have to stop charging,” said the hotel manager.

Schoof let the Punke-Dresens and the British couple stay free of charge in exchange for donations to the Solidarity Response Fund (an initiative supporting COVID-19 relief in South Africa). He and two staff members, a chef and maintenance crew member, stayed in vacant guest rooms to help them while keeping the hotel and dining facilities ready for life post-lockdown. Additional staff members also stayed onsite to maintain the 1,000-acre property, which includes expansive vineyards and vegetable gardens.

While the setting was surreal, with pastel facades and pedestrian streets resembling a Mediterranean village, lockdown life at Spier Wine Farm was very different than before.

House rules for staff and the two families included social-distancing guidelines. All tables were at least six feet apart in the restaurants, and guests had to tidy up for themselves after meals and in their rooms. Meanwhile, these five stressed guests were also trying to figure out what their options were to return to their home countries.

The hotel manager planned fun activities, like cooking and gardening, for the two families to stay occupied.

The British couple began helping in the garden every morning. Four-year-old Oskar expended his young energy by biking around Spier’s maze of grounds. At night, the German family entertained with live music. Punke-Dresen’s husband, who is a music lecturer in Germany, played the keyboard after dinner for the families and staff.

They also diversified the usual hotel meals with one of Oskar’s favourite delicacies: pizza.

“Oskar and I love making our own pizzas at home in Hamburg, and since he also enjoys eating pizza here in South Africa, together with the chef we made pizza for all of the staff members,” Punke-Dresen wrote in a blog post for the wine farm. “The owners and manager have been incredibly welcoming. This is why every day we can hardly believe how lucky we are to be stranded here.”

Lucky or not, being stranded in a foreign country with a four-year-old was nerve-wracking.

Luckily, Punke-Dresen, with the help of Schoof, was able to get her family on the first flight home, which they luckily caught on April 3. Schoof is still helping the British couple navigate options; their return flights have yet to be confirmed.

The wine farm is also still paying all of its team members, both part and full-time, whether they’re working or not.

As the general manager of a company that employs over 500 team members, Schoof’s work doesn’t stop with these five guests. Spier’s team members rely on their jobs – particularly during the COVID-19 crisis. That’s why, despite revenue drops, Schoof is paying all team members, including part-time employees, whether they’re working or not.

“We’ve been brutal in looking at our operating costs and turning over every stone,” he said. “We made the decision to pay everyone, and we’ve instituted a minimum wage for those on part-time contracts. So whether they work the hours or not, there’s a minimum income.”

The hotel manager hopes domestic travel and wine sales can help the wine farm survive once the lockdown lifts.

But at this point, they can’t look that far ahead. Even after the last guests leave, Schoof will keep the wine farm’s kitchens running to help feed staff, their families, and local community members in need. In a one-day trial run, five chefs (some staff members, others hired from the community) created more than 2,000 meals. He hopes to do much more of this in the coming weeks.

“In South Africa there’s this word, ubuntu, it’s the spirit of togetherness,” Schoof said. “I think that if we look at our facilities, and look at ways to get companies and suppliers involved to help us distribute [meals], then we can make a difference in a really tough time.”