I saw the controversial 'Sonic the Hedgehog' movie, and it was a delightful kid's romp made far better by a classic Jim Carrey performance

Hollywood may have finally – finally! – figured out how to turn iconic video game franchises into movies.

In “Sonic the Hedgehog,” the new movie from Sega and Paramount that aims to set a foundation for a whole new series of Sonic films, little time is wasted.

The premise is simple, and presented immediately: Sonic is a speaking hedgehog who can run incredibly fast. His power is clearly unique, and that makes him a target for power-hungry villains. He’s driven from his home dimension as a young hedgehog, and he escapes to Earth through a magical golden ring.

Do you need more explanation? I certainly didn’t.

How does Sonic get to Earth? Through a magical golden ring, of course.

Sonic is from another dimension where animals speak, and glittering golden rings open up portals to other universes. He’s just a baby hedgehog, already imbued with unknown powers enabling him to – what else? – run super fast.

The movie expends virtually no time running through this brief origin story. The long and short is this: Sonic is on the run from forces looking to use his power for evil.

Unfortunately, after Sonic leaps through one of these magical golden-ring teleporters, he ends up in modern-day America – and the American military immediately learns about and begins seeking out the little hedgehog.

Enter: Dr. Robotnik, as played by a throwback version of Jim Carrey. 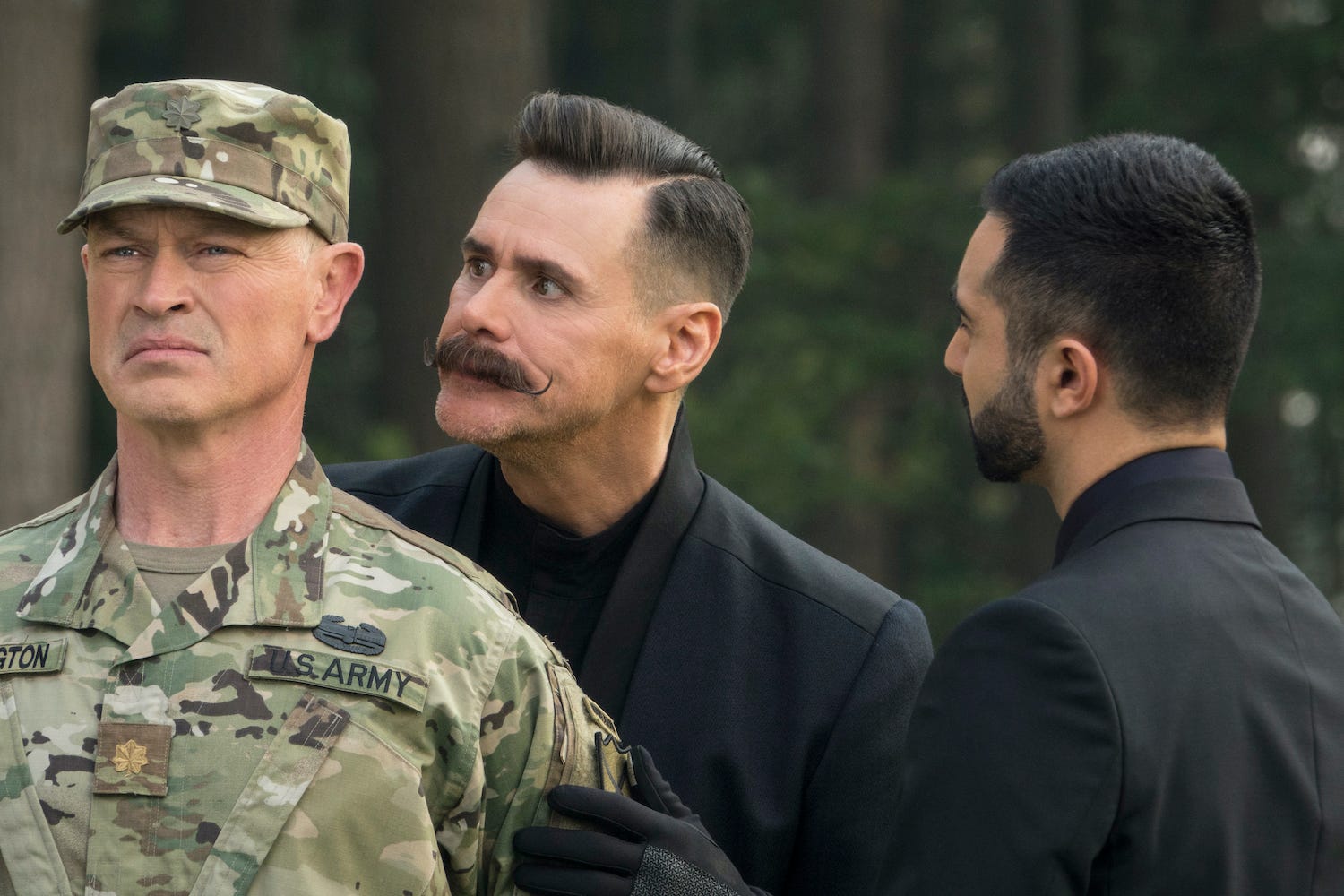 Though Sonic is the namesake of the film, and he’s portrayed hilariously by Ben Schwartz (of “Parks and Recreation” fame), the breakout role is Jim Carrey’s portrayal of Sonic nemesis Dr. Robotnik.

Carrey channels the characters that lifted him to prominence so many years ago, from Ace Ventura to Stanley Ipkiss from “The Mask” to Fire Marshall Bill from “In Living Colour,” to turn Robotnik into an over-the-top, ultra-confident egomaniac.

What Will Ferrell’s Mugatu was in “Zoolander,” Carrey’s Robotnik is in “Sonic the Hedgehog” – a megalomaniac with an aggressively silly sense of style.

There’s one particular scene where Carrey does lab experiments while garishly dancing around his facility that embodies the best aspects of the film: High-production quality lavished on very silly ends.

It is a miracle that Paramount went back and fixed Sonic’s look — he’s cute, cartoony, and endearing.

When the first trailer for “Sonic the Hedgehog” showed up last year, fans were horrified at how Sonic looked. He had human teeth! And tiny eyes! He looked, frankly, extremely creepy.

The reaction was so strong, in fact, that Paramount went back and re-did the film’s visual effects for Sonic. “The message is loud and clear … you aren’t happy with the design and you want changes. It’s going to happen,” director Jeff Fowler wrote on Twitter at the time.

That difference was critical, it turns out: The final version of Sonic is far cuter and furrier than the previous one. Instead of a humanoid Sonic, the movie has a version far closer to the rounded, animal-like Sonic we know from the original Sega Genesis game (and his many video game depictions since).

This is particularly meaningful when Sonic’s cuteness is played for laughs, as it is repeatedly throughout the film. Those moments land, and he’s genuinely cute – scenes that could’ve gone dramatically differently had Paramount stuck with the original, horrifying look.

“Sonic the Hedgehog” is largely an excuse for Ben Schwartz, who plays Sonic, and Jim Carrey, who plays Dr. Robotnik, to act silly.

If I have one complaint about “Sonic the Hedgehog,” it’s that the story takes far too long to introduce Sonic to Dr. Robotnik.

Schwartz and Carrey are clearly the driving forces of this movie, and it takes far too long for those two driving forces to begin interacting. Much of the movie’s run-time has Sonic hanging out with a cop having a career crisis (James Marsden) while Robotnik torments his assistant (Lee Majdoub).

Sonic’s cop buddy and Robotnik’s assistant are of course intended to act as the “straight men” to Sonic and Robotnik’s over-the-top personalities, but the most interesting, hilarious interactions are between Schwartz’ snarky Sonic and Carrey’s egomaniacal Robotnik.

Though “Sonic the Hedgehog” is clearly aimed at kids, it incorporates enough old-school references and grown-up humour for parents to have a good time as well.

Chances are, lots of parents taking their kids to see “Sonic the Hedgehog” may come to the film with their own nostalgia for Sonic from childhood.

I’m 35, and I grew up playing the original “Sonic the Hedgehog” on Sega Genesis. I am here to tell you that, yes, the movie is rife with references to the game series. Sonic eats a chilli dog. Someone, at some point, says “Gotta go fast.” He does a spin dash to destroy something. There’s even a special post-credits scene that people in my theatre outright cheered at – a very specific reference to a very specific character that I won’t spoil here.

But even if you come to the movie with zero nostalgia for the game series, “Sonic the Hedgehog” walks the line that the best kids movies do: There is humour that adults will appreciate alongside their kids, and there’s humour that will go right over those same kids’ heads that’s intended for adults.

“Sonic the Hedgehog” launches on February 14. Check out the latest trailer right here: