When “Sonic the Hedgehog” burst onto the Sega Genesis console in 1991, he was a very impressive little guy. He ran incredibly fast, as did the game he starred in — it was especially impressive compared to pretty much anything else out there.

There was only one problem: “Sonic the Hedgehog” isn’t a very good game. Nintendo/SegaCompared to the original ‘Super Mario Bros.’ trilogy on the NES, Sega’s ‘Sonic the Hedgehog’ was a breath of fresh air — fast, sharp, and edgy compared to Mario’s kid-friendly approach.

Your nostalgia-laced memory may be screaming out in anguish at that statement, but revisiting so-called “classic” Sonic games will confirm the assertion. It’s fast, and pretty, but not much else — and things haven’t gotten better over time.

With “Sonic Mania,” that long losing streak is finally broken. Not only is “Sonic Mania” a good Sonic game, it’s a good game period. To be clear, 'Sonic Mania' is rife with homage to the long-running 'Sonic the Hedgehog' series. Starting with the main title screen and running throughout the game, there are references galore in everything from Sonic's idle animation to the Eggman/Robotnik-themed levels to the many, many secret areas.

But the game itself isn't entirely built on homage -- 'Sonic Mania' is instead a love letter to your nostalgia. It feels like your rose-tinted memories of playing the original games over 20 years ago, though it's actually a far more modern game.

It runs at a stunning 60 frames-per-second -- quickly and smoothly -- which makes Sonic's high-speed movement look better than ever. There's a real sense of momentum to Sonic's speed, like you're controlling a snowball rolling downhill. What made Sonic games so different from Mario games, aside from speed and visuals, was their sense of momentum. Sonic zooms through loops, flies into the air and catches a downhill just right so as to keep the momentum going -- he's like a motorbike more than a Mario-esque character.

As seen above in an early example, Sonic (followed by Tails, naturally) is rushing downhill to a quarterpipe platform -- it's a setup as simple as this that leads to a variety of different gameplay options soon afterward. Perhaps you'll use Sonic's built up momentum to reach an unusually high platform, or perhaps this leap is a red herring and a secret is hiding just below in the next section of level. Perhaps both! In fact, it's very likely that both options are on the table -- 'Sonic Mania' is full of moments like this where you can choose one of several options.

This is a classic Sonic trope, of course -- branching paths through each level -- but 'Sonic Mania' makes those paths clearer than ever. When you pair that replayability with the game's snappy controls, 'Sonic Mania' embodies everything the series has attempted to achieve.

'Sonic Mania' looks and sounds and plays like one of the first three 'Sonic the Hedgehog' games. In many ways, it's a mash-up of those three games for modern audiences. Sega
Yes, that is Knuckles. The Echidna, yes.

'Sonic Mania' starts out as a direct homage. You're playing through Green Hill Zone -- the first area in the first 'Sonic the Hedgehog' game. The original music is re-created and everything. Things quickly begin to evolve, and one of the first things you'll notice is the incorporation of elements from later Sonic games.

As seen above, one of the game's three playable characters is Knuckles (who first appeared in 'Sonic the Hedgehog 3') -- you can also play as Tails, the two-tailed fox buddy of Sonic. Both of these guys didn't appear until sequels of the first game arrived. Believe it or not, the image above is from the same Sonic game as the previous images. In this secret bonus stage, you're tasked with chasing down a UFO on a 3D race course. If this looks suspiciously familiar, you're probably a hardcore Sonic fan -- the secret area feels most reminiscent of the Sega Saturn game 'Sonic R.'

Little nods like this to obscure Sonic games are both delightful for series fans and a huge benefit in 'Sonic Mania,' mixing up the game's pacing with fun asides. Even if you don't get the reference, you're likely to enjoy the suddenly very different gameplay.

For the first time ever, a Sonic game feels modern. 'Sonic Mania' feels blessedly modern in how it plays; it's delightfully nostalgic in how it looks and sounds. 'Sonic Mania' is the Sonic game that Sega's been trying to make for over 20 years, and it's the first Sonic game I can unequivocally recommend to anyone who likes games. You don't need to be a Sonic devotee, or a superfan, or an apologist -- you just need to be someone interested in playing good games.

'Sonic Mania' is available now on Xbox One, PlayStation 4, PC, and Nintendo Switch. It costs the delightfully nostalgic price of $19.99. Check out the launch trailer to see it in action right here: 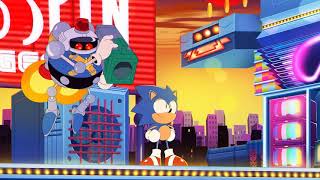