Social Security To Bernanke: You're Killing Us!

Bernanke has said dozens of times that he wants to boost inflation in his effort to lift stocks. He’s succeeded in pushing up the cost of things over the past year. Everyone is paying a price. Social Security is no exception. As it turns out, Ben’s policies have been hitting SS in a number of negative ways. Ben is driving up the costs over at SS and at the same time he is killing their interest income.

We get inflation numbers for September next week. This is an important data point for some 55 million recipients of Social Security checks. On the assumption that there is no (little) change in the mum numbers the CPI-W will come in at 223.4. This number is used to calculate the average for the fiscal 4th quarter. The result is then compared to the 2008 fiscal 4th Q. My numbers:

The question to ask is, “What does this do for SS?” The answer is, “Nothing good“. To make an assessment of what 2012 will look like it is necessary to make some assumptions on what will happen in the real economy, and most importantly, what will happen to total employment.

My base case for 2012 is a repeat of 2011. No recession, but anemic growth. Total payrolls will rise (in part due to an increasing population). The number of new jobs will average 100k a month. As a result SS payroll tax income will rise by $24 billion (same as 2010-2011). Note: My Base Case is actually fairly optimistic. We could easily have negative growth (and zero job growth) for a quarter or two next year.

My numbers for the 2012 cash components at SS:

There is a non-cash component to SS income. They get interest (paid in paper) on their holdings of Special Issue bonds. The SS Trust Fund owns $2.6 Trillion of this script. The % that the TF earns on this hoard is substantially above the current market rates. But there are troubling signs on the interest income line as well.

With the % income, the net change at SS will be a 2012 surplus of a lousy +$40b. This is a very important number. It’s dangerously close to zero. I can’t predict what will happen beyond 2012. What will happen with payrolls, the economy, inflation and interest rates is by no means clear. One very possible outcome is that 2013 and 2014 will bring (more or less) what we have in 2011/12. AKA Stagflation.

Ladies and Gentleman that would be an unmitigated disaster. Should we have more years of stagflation, the net surpluses (includes % income) at SS would fall to zero in 2014 and be negative in 2015. Once that line is crossed, it rapidly collapses. It’s nearly impossible to reverse.

The current Base Case assumption by SSA is for the TF to “top out” in 2025. The forecast is that the TF balance will continue to grow for another 12-14 years. The SSTF projection is that the Fund will exceed $4 Trillion before it begins to decline.

Should the economy continue as it is, we reach the “top out” in 2015. The TF balance will never exceed $3 trillion. In other words, a critical milestone for SS will come 10 years early, and leave the TF short more than $1 trillion. The broad implications of this are hard to fathom. A major restructuring of SS would be required. 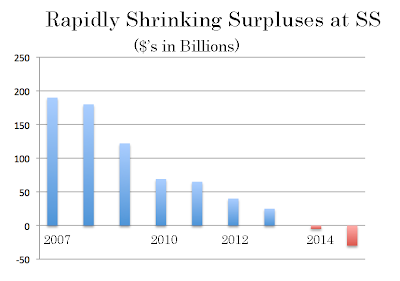 (#1)
To my knowledge, I’m the only one talking about this kind of outcome. So I expect to get flack from the usual suspects that my numbers are not reliable. To that I would respond that my numbers are consistent with the SSTF’s own numbers. What I think is coming is worst-case outcome (stagflation), but one close to the parameters of what SS considers reasonable. These are the numbers for the key variables from SSA and the ones that I use:

My outlook is worse than the SSTF High Cost estimate for revenues. I maintain that this is justified as SSTF has built in a much stronger economic recovery into their model than than I (and Bernanke) consider likely.

(#2)
ZIRP, QE the Twist (and other actions) will be with us for years to come. SS (like every other investor) will have to suffer with low yields on investments as a result. Over the next five-years a substantial portion of SS’s high yielding portfolio will run off. It will be reinvested at sub 2% returns. This is my argument for a rapidly declining net % number at SS. A look at the portfolio and what is maturing: 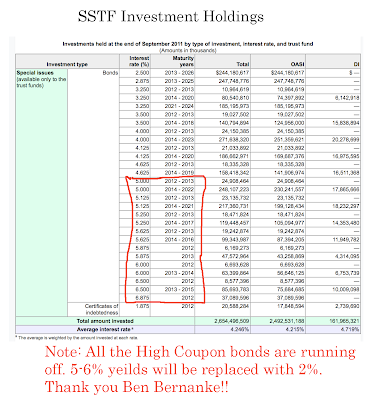 (#3)
For 2012 SS will run a cash deficit in 9 out of 12 months. SS will have to fund these cash shortfalls by selling a portion of the TF notes. Think of this as having money in a bank CD, but being forced to borrow from a CC to cover a monthly nut (a reverse Repo). As a result, net interest income gets hit.

Yields on the TF securities are set by a formula that has benefited SS for many years. We have been in a 20-year cyclical decline in interest rates. The SS formula takes an average of prior years long-term fixed rates (it excludes short-term rates in the calculation). As a result, the interest income at SS has been “smoothed” and artificially maintained at higher % rates. That said, time and the formula are catching up with the Fund. In 2007 the SSTF invested 15-year money at 5.0%. For 2009 it was 3.5%. In 2011 they only got 2.5%, half of what it was just 4 years ago.

There is a part to this that gives me a chuckle. In month where there is a shortfall the Fund must sell bonds. The discount rate used for these routine transactions is also set by the formula. As the formula excludes short-term rates the Repo rate is set at an artificially inflated level. In August the TF had a deficit of $8.4B. They reverse Repo’ed that at a cost of 2.25% for 4 months ($55mm in interest expense for just the August shortfall). This will add up and get bigger.

I love it. Every dirt bag bank in the country is borrowing money from the Fed at ¼%. At the same time the largest holder of USA government securities in the world is borrowing short-term at 8Xs that.