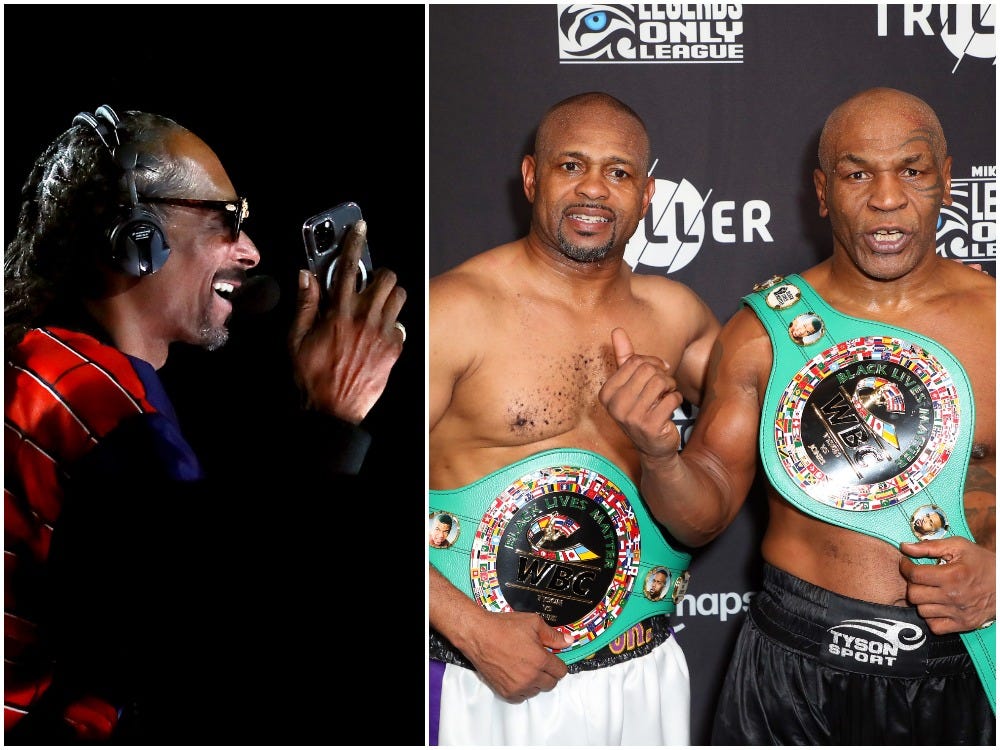 Tyson, 54, and Jones, 51, returned to the ring at the behind-closed-doors Staples Centre in Los Angeles for the first time in years, topping a bill which included a pro cruiserweight boxing bout between the YouTube creator Jake Paul and the former NBA dunk champion Nate Robinson.

The event was one fun night, regardless of whether that was because of Paul’s shockingly vicious second-round knockout win over Robinson, or seeing two of boxing’s all-time greats â€” Tyson and Jones â€” move around in their 50s.

Three things that enhanced the show were production-value, musical performances, and commentary.

It all combined for an entertainment extravaganza.

And the 49-year-old rapper Snoop Dogg seemingly had a hand in all of that â€” everything except actual fighting.

Known for his vocals on smash hits like “Ain’t nuthin’ but a G thang,” Snoop also starred in the blockbuster movie “Starsky and Hutch,” and has made many appearances in cooking shows with Martha Stewart.

He even rapped on the pre-show Saturday, performing his “Down for my N’s” track from 1999, as well as “Gin and Juice,” amongst others.

A jack of all trades and master of everything, Snoop is even a dab hand at commentating on the fights â€” something he showed on UFC clips over the years â€” and this all came to the fore this weekend.

As Robinson face-planted the floor and lay motionless after taking a flush Paul punch, Snoop could be heard screaming: “Oh lawd.”

When Tyson and Jones were throwing fists, he uttered the now-immortal phrase: “This is like two of my uncles fighting at the BBQ.”

He also said: “My uncles is getting it in. Hey, Grandma â€¦ they fightin’ again!” and later added: “Side order of short ribs with Mike Tyson sauce on it.”

The zingers did not go unnoticed and even caught celebrity attention.

LeBron James said on Twitter: “My unk Snoop Dogg is simply the greatest at whatever he does, man! Swiss army knife.”

My Unk @SnoopDogg is simply the greatest at whatever he does man!! Swiss Army Knife++++++

Tyson and Jones left the ring with a belt each â€” a specially-designed WBC championship with Black Lives Matter inscribed around the middle.

The main event was regarded as a draw.

Mike Tyson smoked a joint before the Roy Jones Jr. exhibition, threw 193 punches in 16 minutes, and said he’d do it all again

Roy Jones Jr. said his body hurts everywhere Mike Tyson landed a punch: ‘He is capable of fighting anybody’