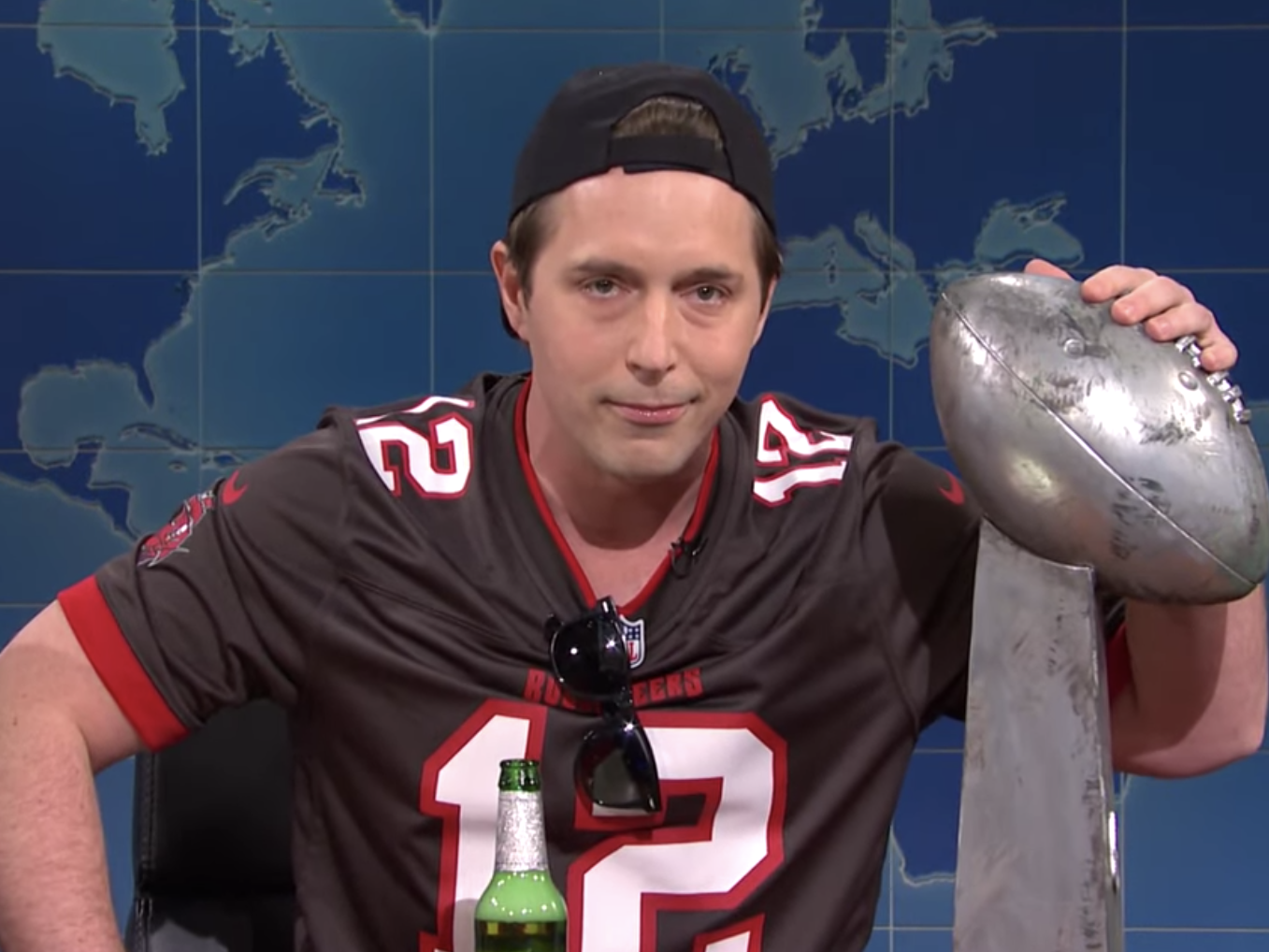 The latest episode of “Saturday Night Live” made a nod to Tom Brady’s post-Super Bowl win and a recent video that showed the quarterback throwing the Lombardi Trophy from his boat.

Bennett, playing Brady, said: “Life’s good. I’m my own man now. I’m free to go day-drinking on my new baller boat and toss the Lombardi Trophy around without a care in the world.”

“Yeah, I saw you throwing the Super Bowl trophy from one bowl to another,” Che said.

“Oh yeah, that was awesome,” Bennett said. “I’ve been bringing this bad boy around with me pretty much everywhere.”

He then used the mock trophy to open a bottle of beer. “Yeah, she’s a little banged up, but she still works.”

“People were surprised I was tossing this bad boy around. But the trophy has got a football on it, and I’m a quarterback, so it made sense,” Bennett said. “What else am I going to do, punt it?”

The skit alluded to antics that ensued at the Tampa Bay Buccaneers’ boat parade on Wednesday, when members of the football team celebrated their Super Bowl LV win against the Kansas City Chiefs. A video from the parade showed Brady holding the Lombardi Trophy near the back of his boat and tossing it across open water to another boat, where it was caught by the Buccaneers tight end Cameron Brate.

This angle of Tom Brady throwing the Lombardi Trophy to Gronk's boat ????

Brady credited a “little avocado tequila” for the events that were documented during the team’s celebration.

In one video, Brady’s daughter, Vivian, was heard saying: “DAD NOOOOOO!” before he tossed the trophy across the water.

Season is over but Brady is still completing passes ????

On Saturday, Lorraine Grohs, a woman from Fort Myers, Florida, told news station FOX4 that her dad designed the Lombardi Trophy, and that she wants Brady to apologise. Her father, Greg Grohs, made the first Vince Lombardi Trophy and served as the master silversmith for Tiffany and Company from 1967 to 1994.

In the “Saturday Night Live” skit, Bennett continued during his parody of Brady: “I just won the Super Bowl. I’m probably going to win another one next year, too. My problem is, nobody likes me. I don’t know what I did so wrong. All I did was go out and win Super Bowls.”

But the actor, playing the football champion, went on to say: “Dude, I’m messing with you, Che. I don’t care, people can say whatever they want. I’m the best damn quarterback ever, I feel great . . . my wife is Gisele.”