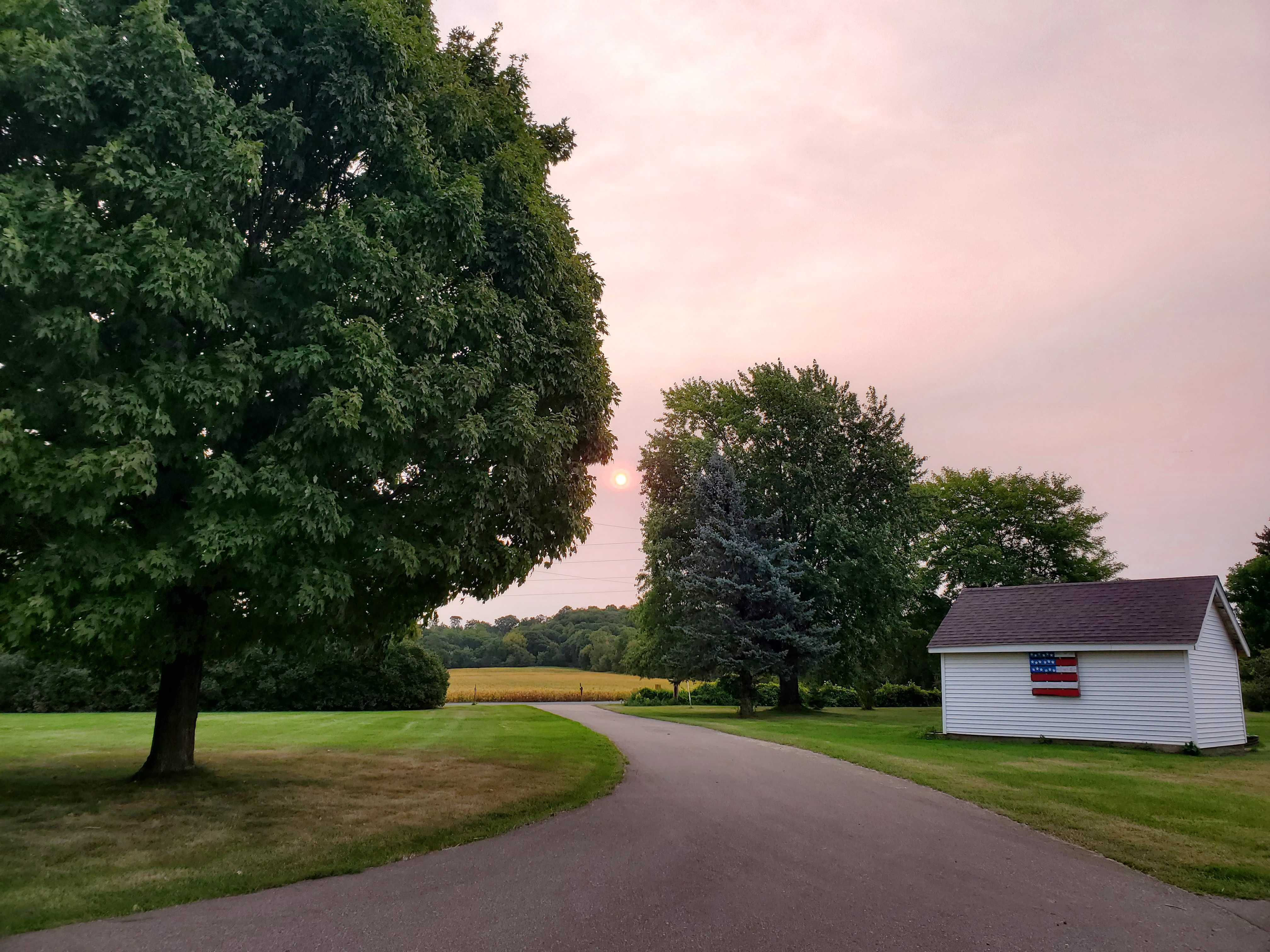 Rebecca Harrington/InsiderSmoke from wildfires along the US West Coast has drifted east, turning skies pink in Hudson, Wisconsin, on the morning of September 15, 2020.

On Tuesday, residents of the Midwest and the East Coast woke up to milky skies and pinkish suns.

At first glance, some of the formations look a bit like clouds â€” but they’re not. At least, not ordinary ones. Instead, they’re hazy formations high in the atmosphere, generated by smoke from thousands of miles away.

California, Oregon, and Washington have all been battling a record-breaking wildfires. More than 100 fires have burned over 4.5 million acres across the three states over the last month. California is fighting the biggest fire ever recorded in state history: the August Complex Fire. At nearly 800,000 acres, it’s almost twice the size of the previous record-holder, the 459,000-acre Mendocino Complex Fire from 2018.

Now, smoke from those fires is drifting across the continent. Some smoke is catching a ride on the polar jet stream, which flows west to east at an average of about 110 miles per hour.

NOAA/NWSThis animated GIF shows the path of the smoke as it’s carried along by the jet stream.

Wildfire smoke has found its way into skies as far as Washington, DC, New York City, and Portland, Maine. It’s even been spotted in Ontario, Canada, where resident Juan Moreno-Cruz captured a hazy pink sunrise on Tuesday morning. 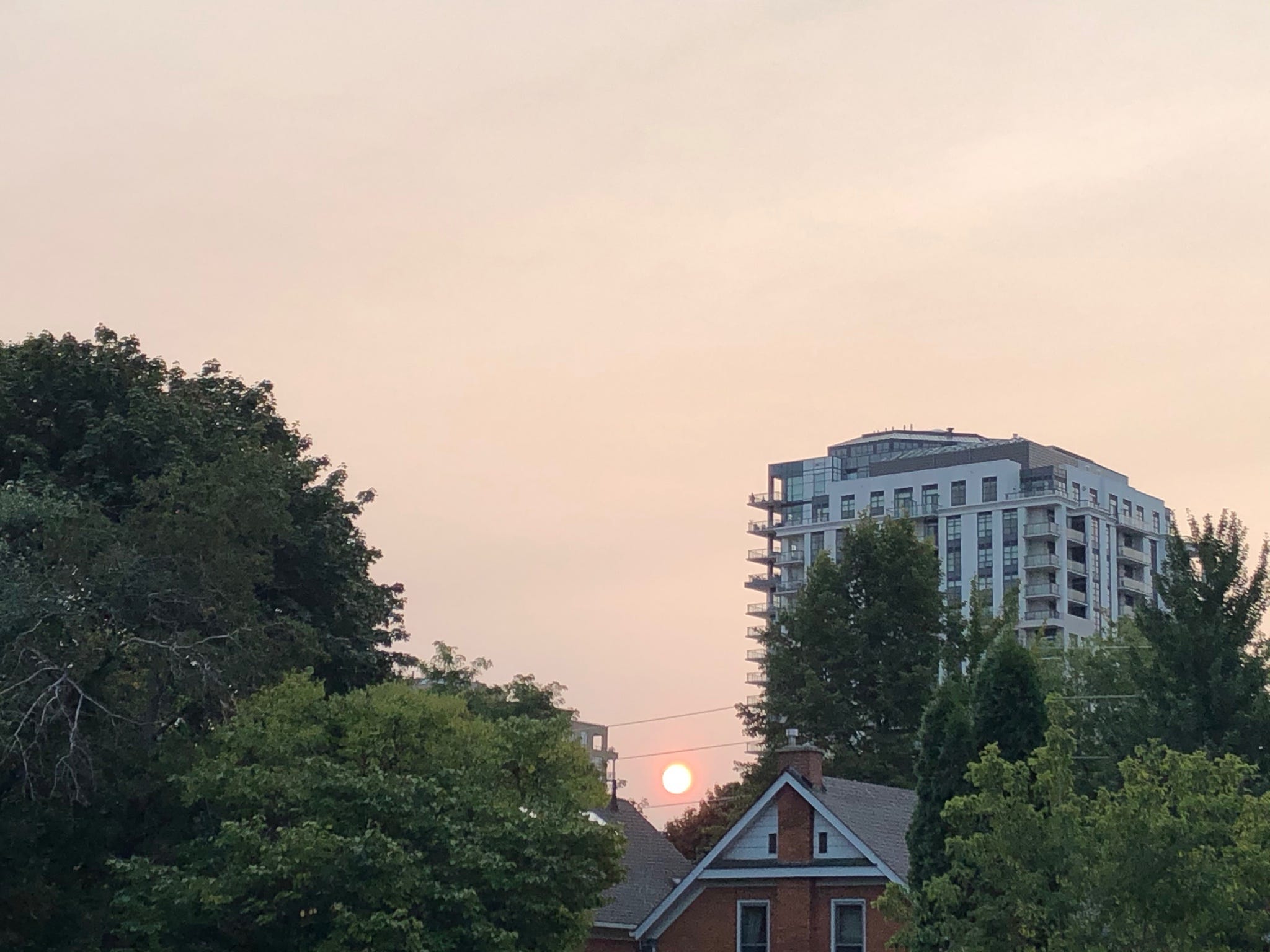 Smoke particles have travelled as far as the Netherlands, more than 5,000 miles away. Meteorologist Geert Jan van Oldenborgh captured the greyish tint on skies above the Reeuwijk Lakes on September 11 and later confirmed its presence via satellite imagery. 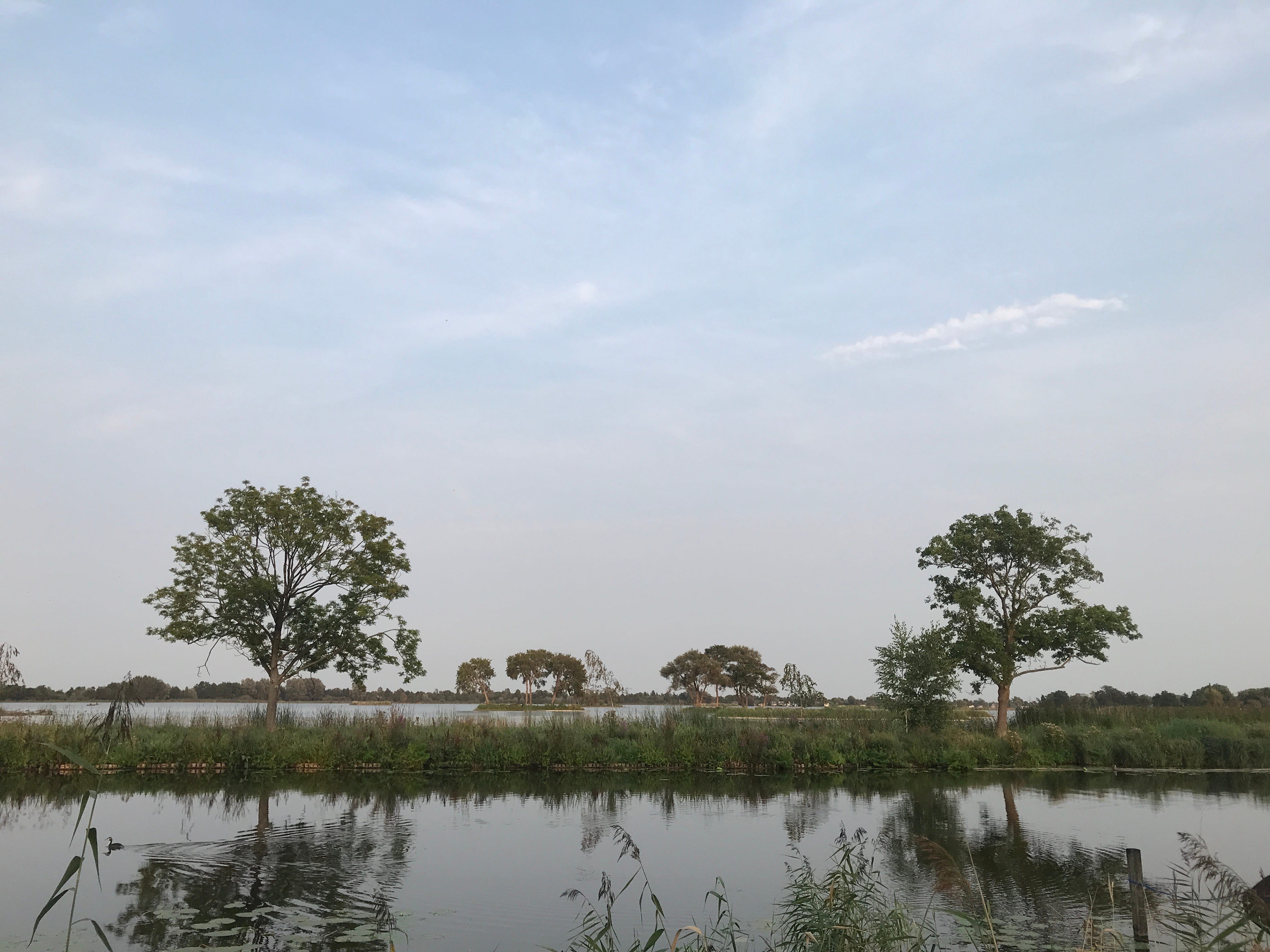 “Made worse by climate change,” van Oldenborgh wrote in a tweet accompanying the images.

Smoke is polluting the atmosphere across the continent

In addition to the visible haze, the wildfire smoke is spreading an invisible, deadly gas across the atmosphere above North America: carbon monoxide. NASA satellite readings over the last week show that CO concentrations over the continent are more than 10 times higher than normal. Though the gas isn’t yet impacting the lower-lying air we breathe, strong winds could eventually carry it downwards and cause significant air pollution.

In the sliding image above, NASA satellites captured the smoke reaching the East Coast. On the left, satellite imagery shows an unfiltered view of the smoke’s spread; on the right, NASA air quality-measuring instruments show how carbon monoxide and other particles have travelled. Red patches indicate higher concentrations of harmful particles.

When the smoke rises high enough, it can enter the tropopause â€” the area between the troposphere and the stratosphere, where jet streams travel.

The bigger the wildfire, the more likely it is to can generate pyrocumulonimbus clouds: enormous thunderclouds of smoke and ash that spiral high into the sky, meeting the path of a jetstream and sometimes making it into the stratosphere. Aside from volcanic eruptions, pyrocumulonimbus clouds are the primary way vast quantities of smoke get released high in the atmosphere.

“It acts like a giant chimney, taking smoke from the ground and injecting it to the altitude of a jet aircraft,” David Peterson, a meteorologist with the Naval Research Laboratory in Monterey,told the San Francisco Chronicle.

The largest pyrocumulonimbus events ever recorded worldwide have all occurred in the past three years, according to the San Francisco Chronicle. That’s because large, hot fires are more likely to produce pyrocumulonimbus clouds, and climate change leads to bigger and more intense wildfires.

As temperatures rise, more water evaporates from the soil, drying out the land. Snow also melts sooner, and spring weather arrives earlier. Early snowmelt and high temperatures deprive vegetation of water, drying it out in time for wildfire season.

In the US, the five years in which the most acreage burned due to wildfires have all been since 2005, according to the Congressional Research Service.

Australia, meanwhile, saw one of its most destructive fire seasons in history in December and January, and those produced an unusually high number of pyrocumulonimbus clouds. Smoke from Australia’s fires circumnavigated the globe, according to NASA.