BY GREG STERLINGJust nine months ago, the overwhelming majority of small business (SMB) owners didn’t consider mobile an important marketing channel. Most surveys showed limited interest and widespread neglect of mobile. It was a very low marketing priority. But as SMBs and their customers have adopted smartphones in increasing numbers, merchant interest in mobile marketing has grown — very rapidly.

Awareness of mobile advertising at the local level is also being fuelled by outbound sales efforts from yellow pages publishers, newspapers and other providers of SMB marketing solutions. Mobile websites, mobile display ads and search marketing have been added to the mix of products that telephone and field sales reps are now routinely pitching to small business owners.

In February 2011, an online survey of more than 7,000 SMBs by Opus Research showed limited understanding and usage of mobile. Roughly 83% of respondents said they were not doing any form of mobile marketing. The small remainder who answered in the affirmative reported a variety of promotional efforts including mobile websites, coupons, search and apps. 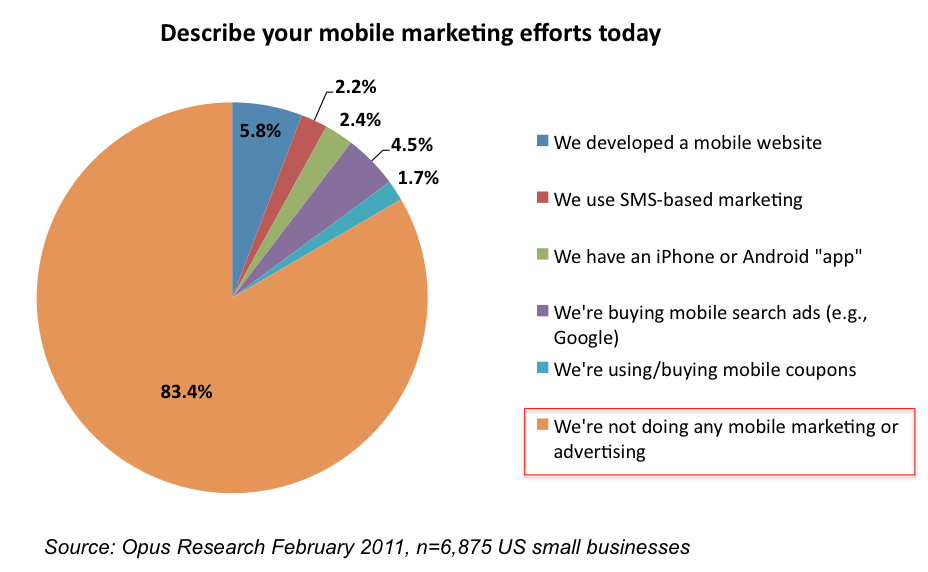 Surveys must always be interpreted with some caution. It’s possible that some of responses were “aspirational,” meaning some “yes” answers were based on a near-term intention to do some of these things (e.g., build a mobile website) rather than existing behaviour. So the actual “yes” numbers may have been fewer.

The same survey revealed that 74% of respondents didn’t even have a conceptual understanding of how to reach their prospects via mobile marketing. Yet two other studies, conducted just a few months later this year, reflect a dramatic shift in attitudes among SMBs about mobile.

A June 2011 survey by SMB portal Manta, of 1,000 US small business owners, found increasing awareness of the importance of mobile. The majority of Manta SMB survey respondents (69%) said it’s “important” or “very important” that their business be found easily on mobile devices. Manta’s survey also asked whether and how the SMBs used their devices in their daily business activities. The overwhelming majority (86%) reported heavy use of smartphones for business purposes: 50% said “at least 10 times per day.” One can readily infer that SMBs’ own usage of smartphones is a primary factor behind the survey finding that it’s now “important” to be found on mobile devices.

In addition, two recent SMB surveys by Borrell Associates showed more concrete interest in mobile and even a willingness to specify budget commitments. Borrell asked business owners “How likely is it that you will incorporate mobile elements into your advertising and marketing efforts to reach potential customers in 2011?” 40 eight per cent said “somewhat likely” or “very likely.” 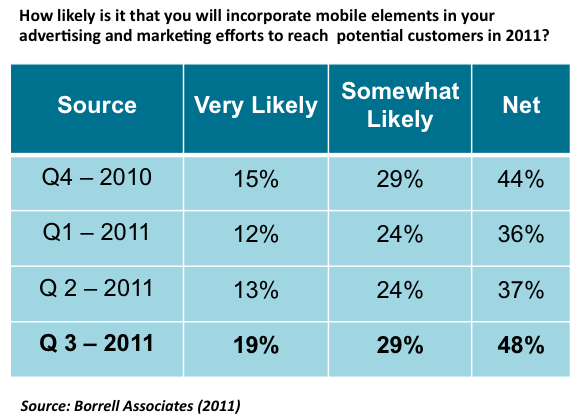 However a second survey by Borrell, among 484 business owners this summer, found that “four out of every five plan to spend money on mobile marketing this year; [and] on average these businesses expect to devote more than 20 per cent of their ad budgets to mobile initiatives.” The survey also reported that 56% of these SMB respondents had been pitched mobile marketing solutions “vendors or media outlets.” Beyond SMB smartphone usage, this sales push is probably also a significant contributor to SMB interest in mobile.

Again, one must be cautious about extrapolating from these responses too aggressively. What they reflect is SMB “intent” first and foremost. We may not 20% of SMB marketing budgets going to mobile any time soon; attitudes and behaviour are two different things. But the responses are significant nonetheless.

Comparing these three sets of survey data over the course of just three quarters in 2011 is striking. There has been a dramatic – even unprecedented – shift in perceptions and receptiveness to mobile among SMBs. In the world of small business marketing there’s never been a marketing channel or product that has gone from relative obscurity to top of mind like this in such a short period of time.

Greg Sterling is the founding principal of Sterling Market Intelligence (SMI), a consulting and research firm focused on the Internet’s influence on offline consumer purchase behaviour. He also is a Senior Analyst for Local Mobile Search, an advisory service from Opus Research tracking the evolution of the mobile Internet.