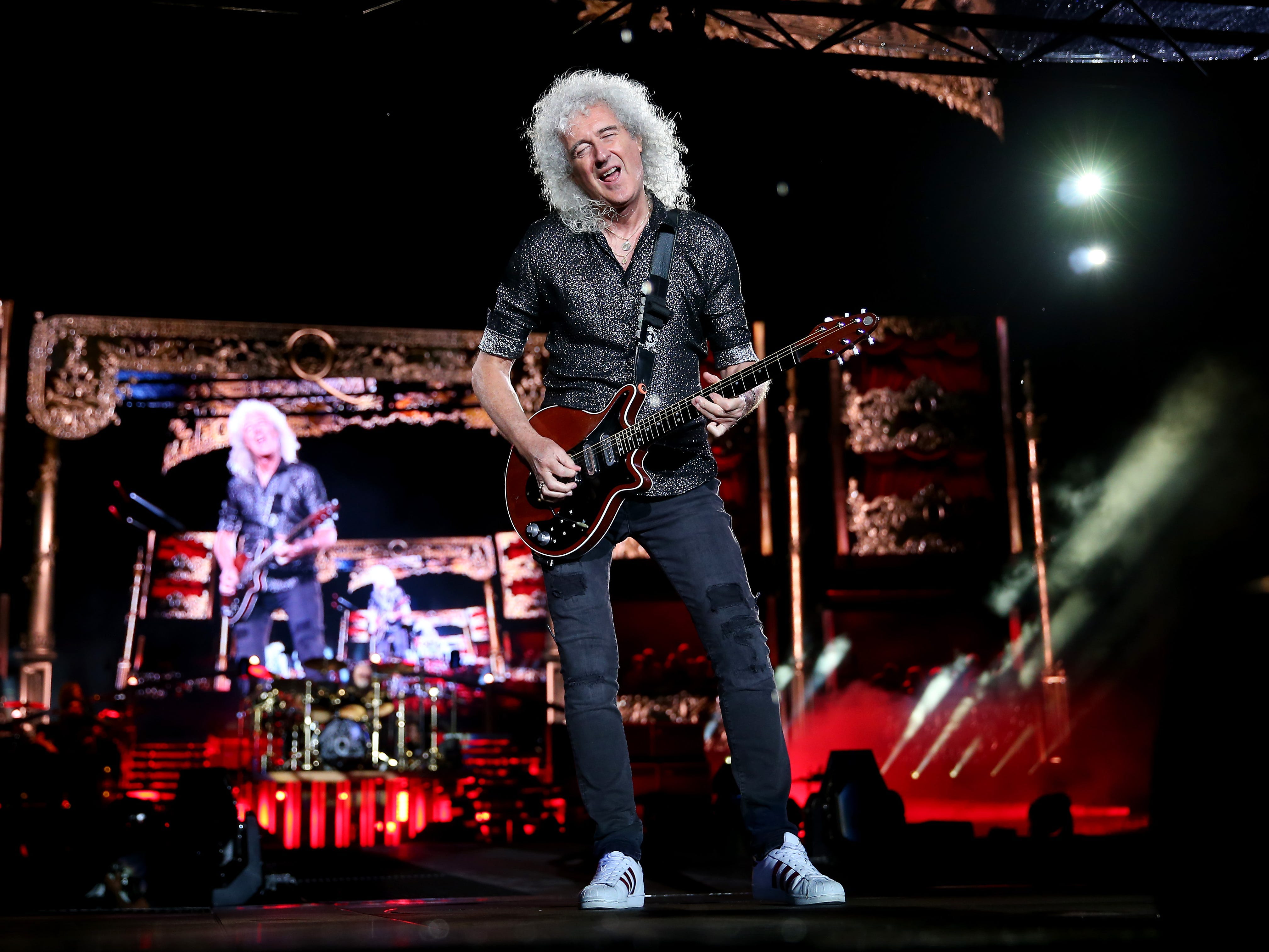 Don Arnold/Getty ImagesBrian May is perhaps the most famous rock musician with a higher education degree.

There’s a common trope of escapism in all genres of music, but especially rock and roll, that if school isn’t clicking, you can always drop out and try to make it as a rock star. And that’s exactly what many famous musicians including Elton John, David Bowie, and Ozzy Osbourne did.

Others, however, excelled both on stage and in the classroom. These musicians weren’t just good students in high school; a handful of rockers went on to attend Ivy League schools or earn PhDs.

To celebrate some of the rock world’s brainiest stars, we compiled a list of 10 rock stars with impressive college degrees.

In addition to being Queen’s lead guitarist, Brian May has his PhD in astrophysics.

In addition to writing 22 of Queen’s songs including the megahit “We Will Rock You,” Brian May is an astrophysicist.

Back when Queen formed in 1970, May was in the process of finishing his PhD at Imperial College London. He told Time in 2019 that he had to choose between finishing his doctoral thesis and trying to make it big as a rock star.

“And my choice was made on the assumption that I wasn’t very good at physics and I might be quite good at music,” he said.

After putting it off for decades, May finally returned to college in 2007 and finished his thesis. “I put everything, and I mean everything, on hold for a year. And they put me in a little office in Imperial College and I got down to it,” he told Time.

Though May has spent most of his life touring the globe with Queen, in 2015 he began working with NASA’s New Horizons team as they looked at the first high-quality stereo images of Pluto. 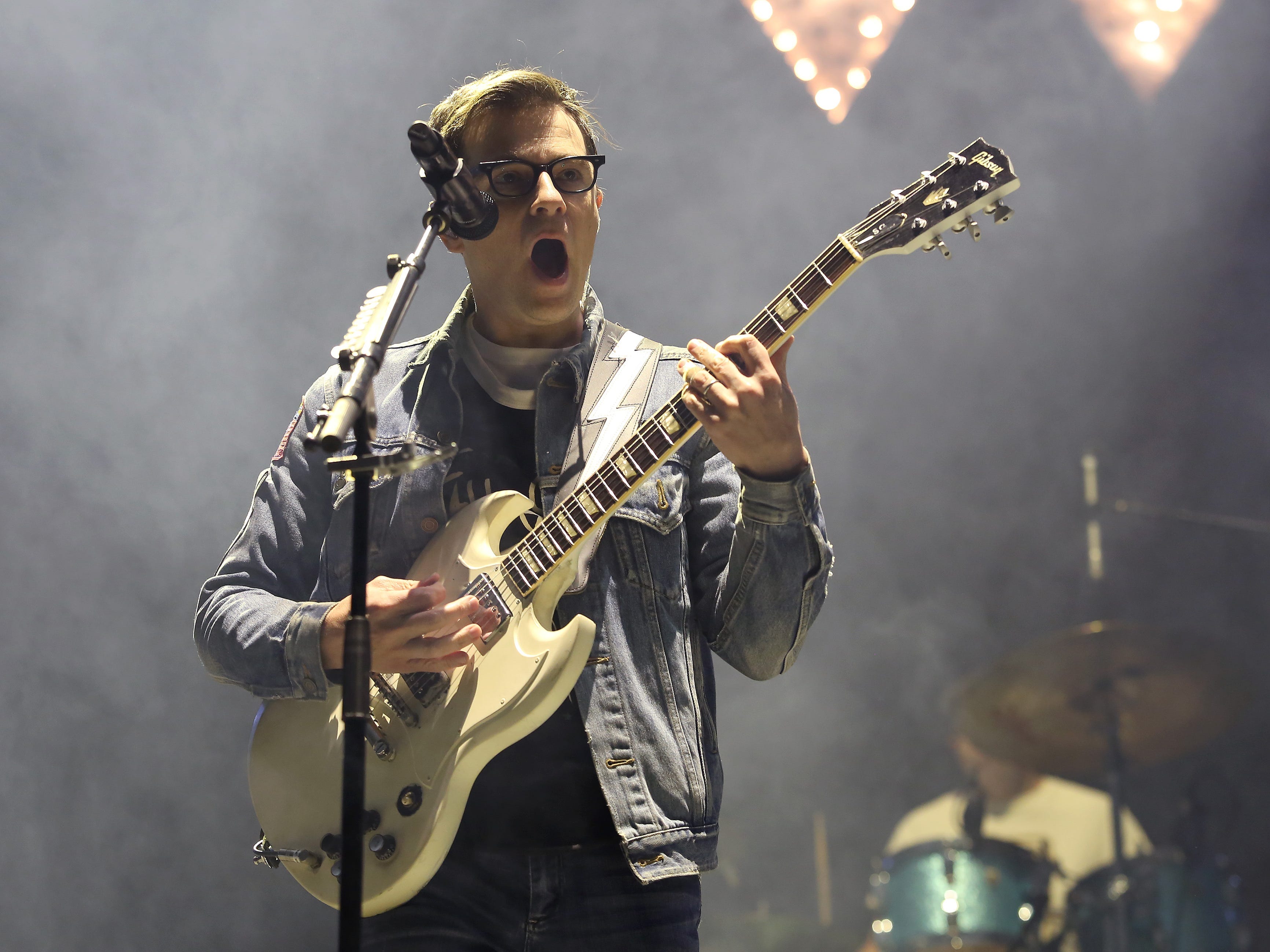 Following a 2005 tour of Weezer’s platinum-selling album “Make Believe,” vocalist and lead guitarist Rivers Cuomo decided to go back to school and finish his bachelor’s degree in English, according to a 2006 article from Spin. Rivers, 35 at the time, had started attending Harvard in 1995 and finally graduated in 2006 as a member of the prestigious Phi Beta Kappa academic honour society, no less.

A 2014 oral history of Cuomo’s time at Harvard from the now-defunct BDCWire quotes a 2014 appearance on Marc Maron’s podcast, in which Cuomo talks about his decision to return to campus just as Weezer reached mainstream success.

“Weezer was on tour supporting the first album and I got so bored. It was like the ‘Groundhog Day’ thing on tour, after a year and a half,” Cuomo told Maron. “And we toured through Boston and I went up to Harvard and walked around and I was like, ‘I would just love to just take a break, read and study, meet people, and have relationships.’ So I filled out the application and they let me in.”

Tom Morello of Rage Against the Machine also graduated from Harvard with honours. 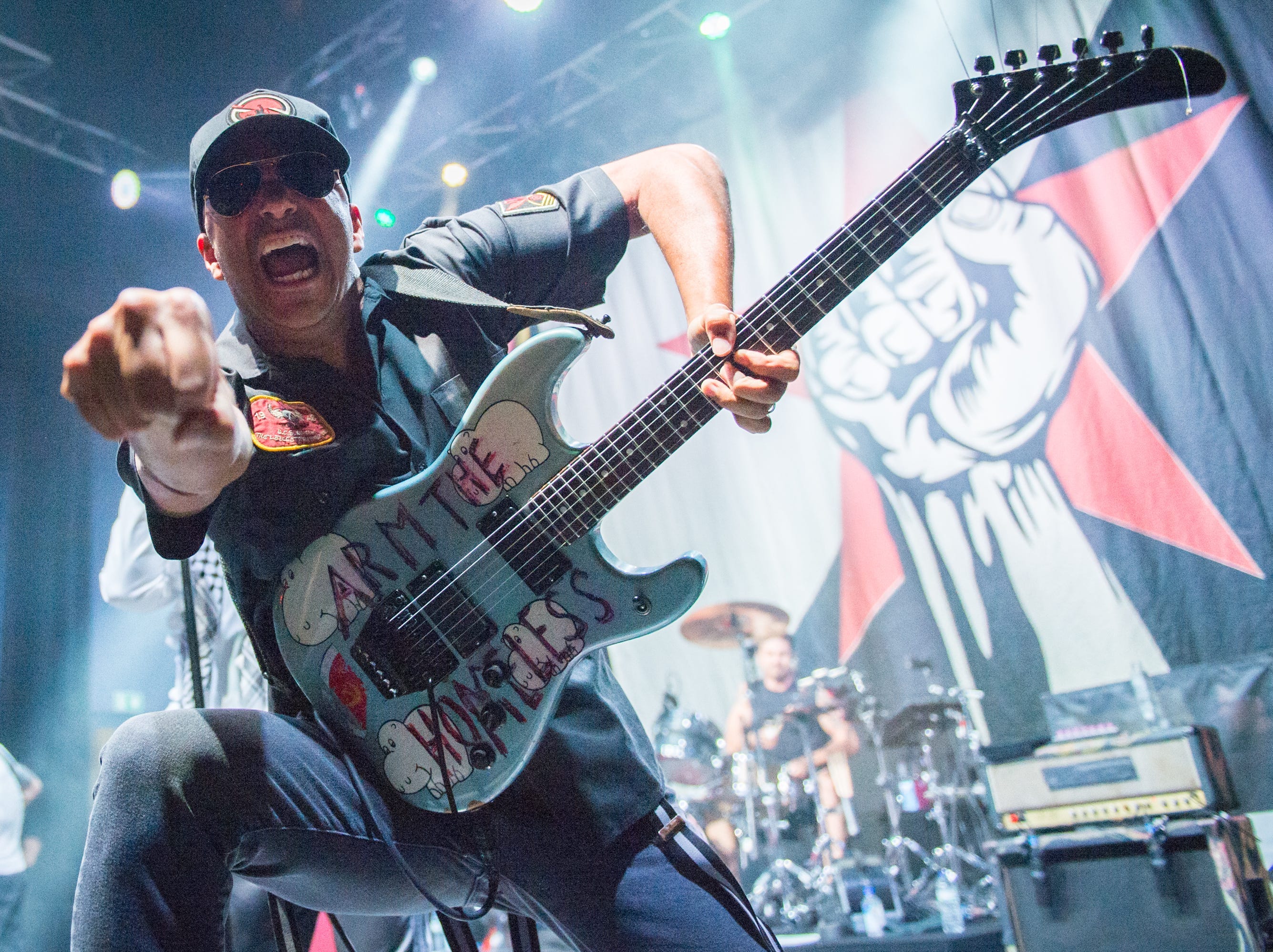 Before he was Rage Against the Machine’s guitarist, Tom Morello was a radical political activist – well, he still is today – studying political science at Harvard University.

After graduating in 1986, Morello moved to Los Angeles and worked for US Senator Alan Cranston, which he described in a 2018 interview with Harvard Magazine as an “eye-opening” experience that ultimately led him toward a career in music, not politics.

During his time at Harvard, Morello juggled practicing guitar for hours at a time with his academics, which he said was “a way to arm myself intellectually.”

In June, Morello pulled the “Ivy League” card on Twitter: After followers criticised his vocal support of Black Lives Matter, he shared a 2017 response to a commenter trolling him for voicing his political views. 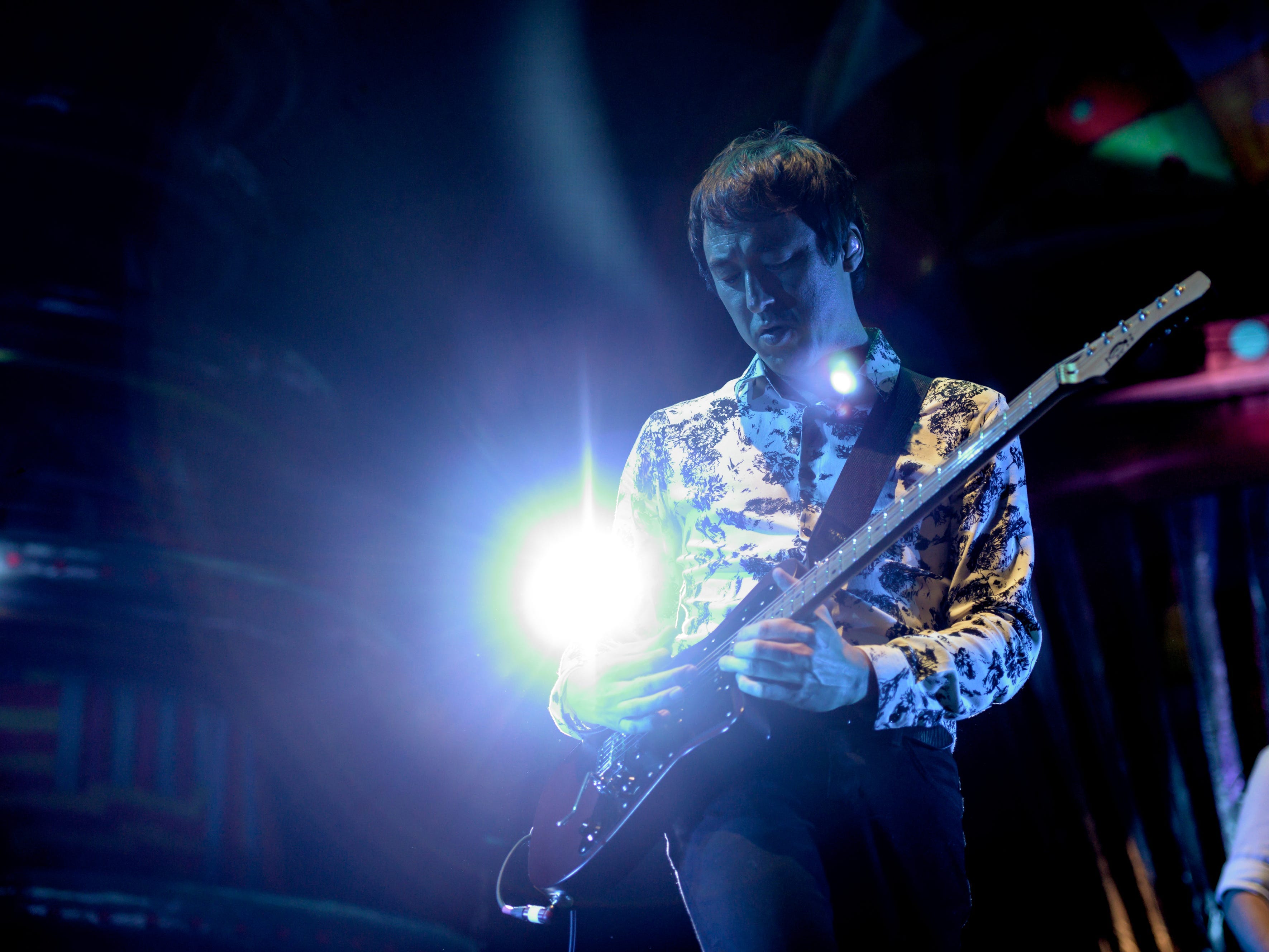 Before Schroeder joined the Smashing Pumpkins in 2007, according to his website, he spent much of the 2000s earning his doctoral degree at the University of California, Los Angeles.

In a 2011 interview with Character Media, Schroeder talked about the important role literature plays in his guitar playing and said that one day he’d like to trade the stage for a classroom and work as a professor.

“Teaching is a form of giving back. I had professors that transformed me, that really opened up a world that I would never have known,” he said. “I love teaching. If you can facilitate pushing someone’s mind and opening up a door, that is the most rewarding thing.”

The Offspring frontman Dexter Holland has a PhD in molecular biology. 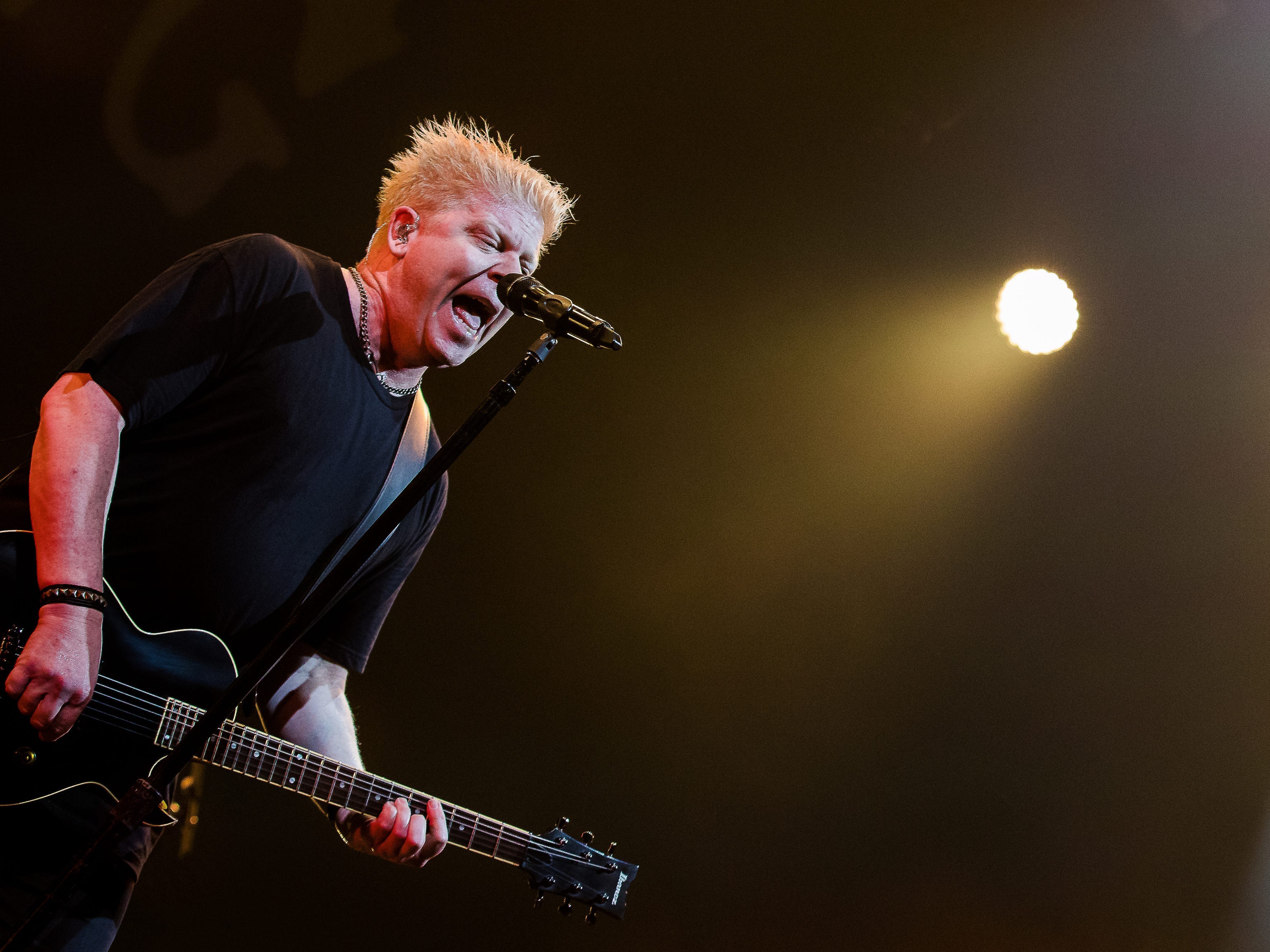 Back in 1994, as The Offspring’s third studio album “Smash” was on track to go multi-platinum, singer-guitarist Dexter Holland was in the middle of completing his PhD in molecular biology at the University of Southern California.

Holland put his studies on hold for two decades, but he ultimately returned to the school and, in 2017, published a 175-page dissertation about HIV research.

In a 2014 retrospective in Rolling Stone about the band’s earth-shattering album, Holland described the difficult decision to postpone his PhD when he was so close to finishing it.

“My mum wasn’t too happy about that! My professor thought I was making a terrible mistake,” Holland told Rolling Stone. “But it wasn’t just like I was saying, ‘F— it.’ We could tell this was going to be something. And we had to see it through.”

Bad Religion singer-songwriter Greg Graffin has a PhD in zoology and currently lectures on evolution. 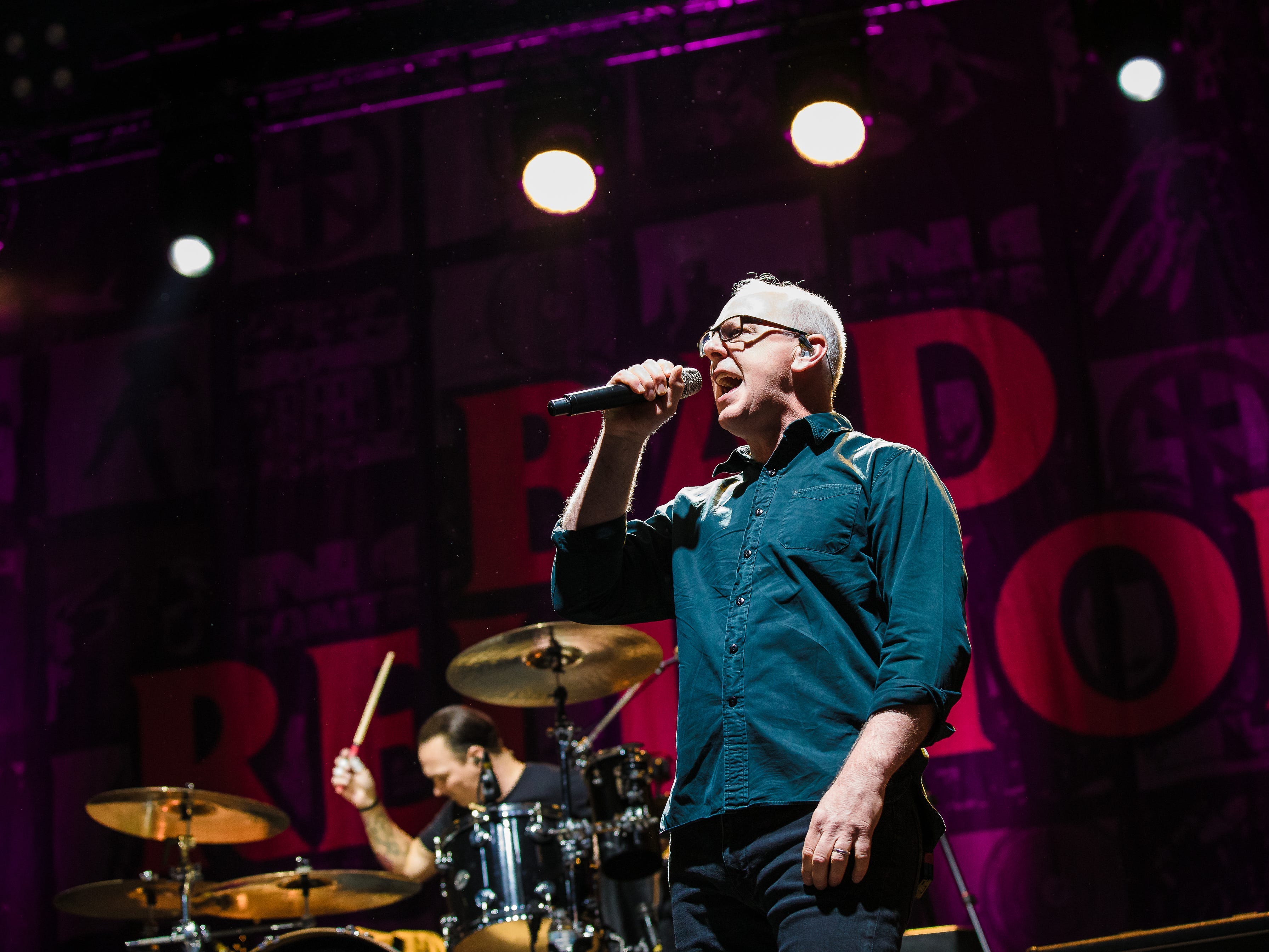 Greg Graffin, the only constant member of the iconic ’80s punk band Bad Religion, earned his PhD in zoology from Cornell University in 2003.

In 2011, Graffin returned to his alma mater as a professor and has taught undergraduate students evolution ever since. In a 2011 interview with the Cornell Chronicle during his first semester as a lecturer, Graffin offered why he returned to the world of academia despite continued success with his band.

“I consider it a great privilege and an amazing bit of luck that we [Bad Religion] are as well known as we are today,” Graffin told the Cornell Chronicle. “But I never leveled with myself that it was as intellectually satisfying as any academic pursuit. Being able to lecture and being able to participate in the conversation that goes on in science, professionally, is also a great privilege.”

The same year, a group of scientists who discovered an ancient bird fossil in the Gansu Province of north-western China honoured Graffin by naming the artefact “Qiliania graffini“in his honour.

Tom Scholz, founder of the rock band Boston, is an MIT-trained engineer. 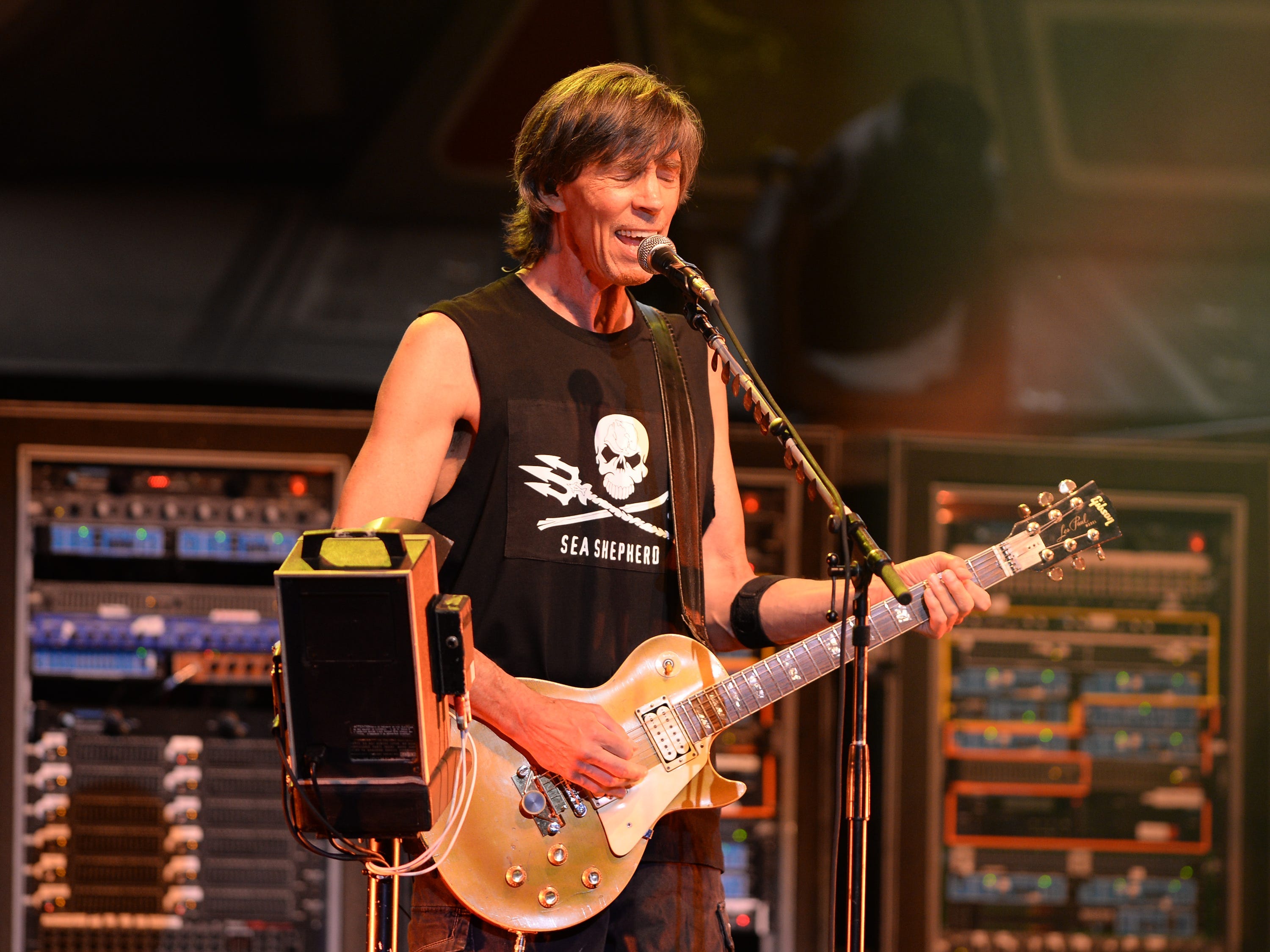 Scholz earned both his bachelor’s and master’s degrees in mechanical engineering from the Massachusetts Institution of Technology.

Following his graduation in 1970, Scholz worked for Polaroid as a senior product design engineer and spent the next six years of his life building a recording studio in his apartment’s basement where Boston recorded the demo of what would become its iconic debut 1976 album.

Scholz explained to the National Academy of Engineering in 2016 that he pursued degrees in engineering thanks to a childhood obsession with inventing and building things.

“I was a designer and builder and small-time inventor from my earliest childhood years, which took the forms you might expect-building model aeroplanes and boats and cars and anything else. I was really fascinated with anything that moved or flew,” he told NAE. “So I guess I had an aptitude for mechanical devices, if for no other reason than because I had dabbled in so many different ones as a child.”

While he was busy touring and recording with Boston, Scholz also founded his company Scholz Research & Development, Inc., which produces musical technology products. Arguably Scholz’s greatest invention is the Rockman, a headphone guitar amplifier that has been used by thousands of guitarists.

Art Garfunkel of Simon and Garfunkel fame has a master’s degree and planned on being a professor prior to becoming a famous musician. One half of the iconic pop duo responsible for hits including “Sound of Silence” and “Bridge Over Troubled Water,” Art Garfunkel earned his bachelor’s degree in art history at Columbia College and his master’s degree in mathematics at Columbia University.

Garfunkel told Forbes in 2017 that if Paul Simon hadn’t come into his life, he probably would have gone on to become a mathematics teacher like he initially planned.

“I would have been comfortable being a teacher,” Garfunkel said. “I supported myself in high school by tutoring kids, and making decent money at it. That was my first instinct about what I could do to make money.”

After Simon and Garfunkel broke up in 1970, Garfunkel moved to Connecticut and actually did teach maths for a short while at the Litchfield Preparatory School. Garfunkel told Forbes he “loved the curriculum, I loved the act of teaching. But, as a profession, it was small.”

James Williamson of Iggy and The Stooges has his bachelor’s degree in electrical engineering. 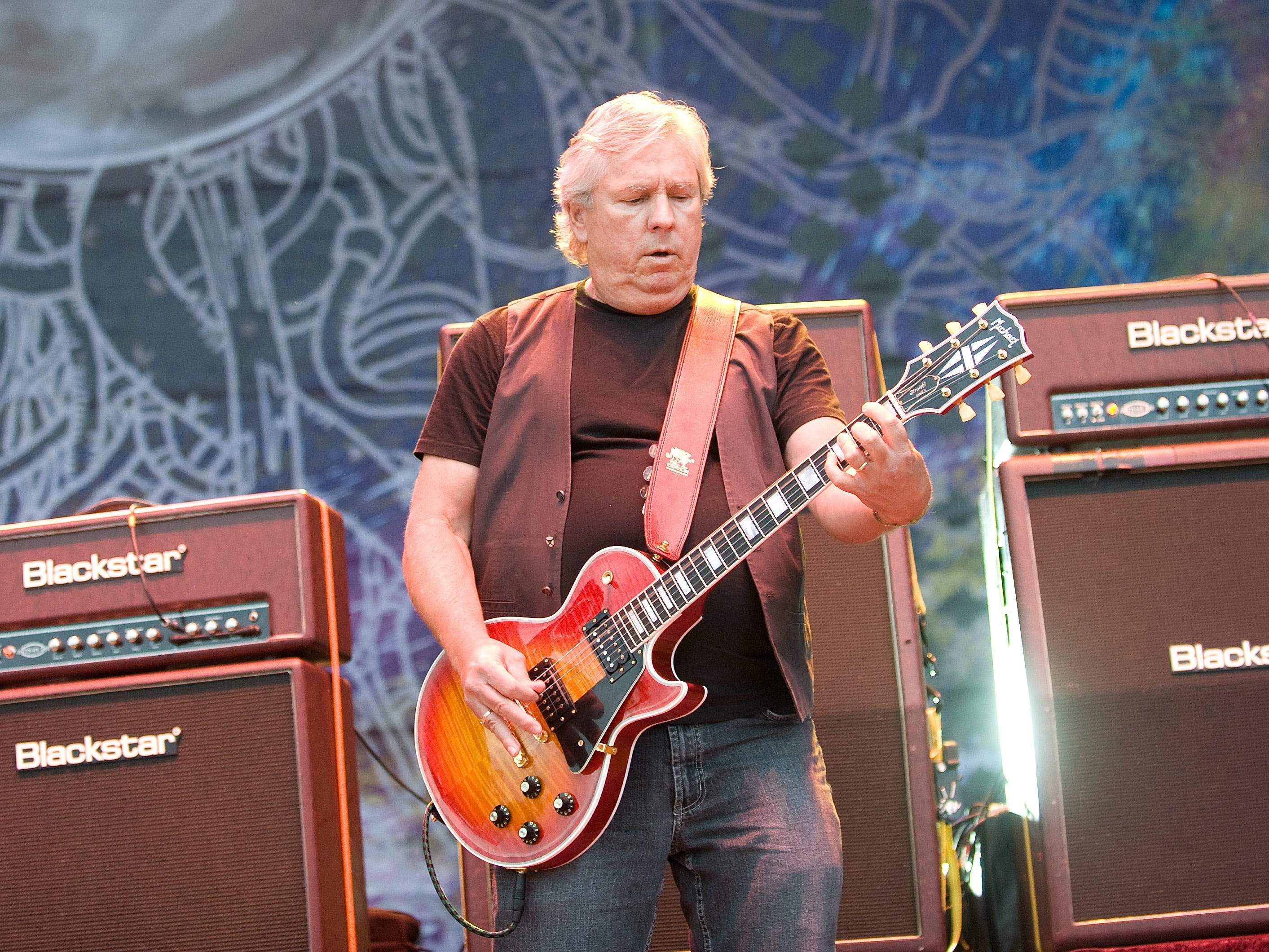 Throughout the late 1960s and 1970s, James Williamson toured the country as a member of Detroit wild child Iggy Pop’s band The Stooges, laying the foundation for modern punk rock.

Then in 1982, he graduated from Cal Poly Pomona with a degree in electrical engineering and spent the next three decades working in Silicon Valley, first as a product designer for Advanced Micro Devices. He then worked as a vice president at Sony but retired in 2009 after the death of Stooges guitarist Ron Asheton and rejoined the band.

“I feel like I have more music in me … I’d still like to do another album or two,” he told Premier Guitar in 2013.

Descendents vocalist Milo Aukerman has a PhD in biochemistry and has had a long career as a scientist. 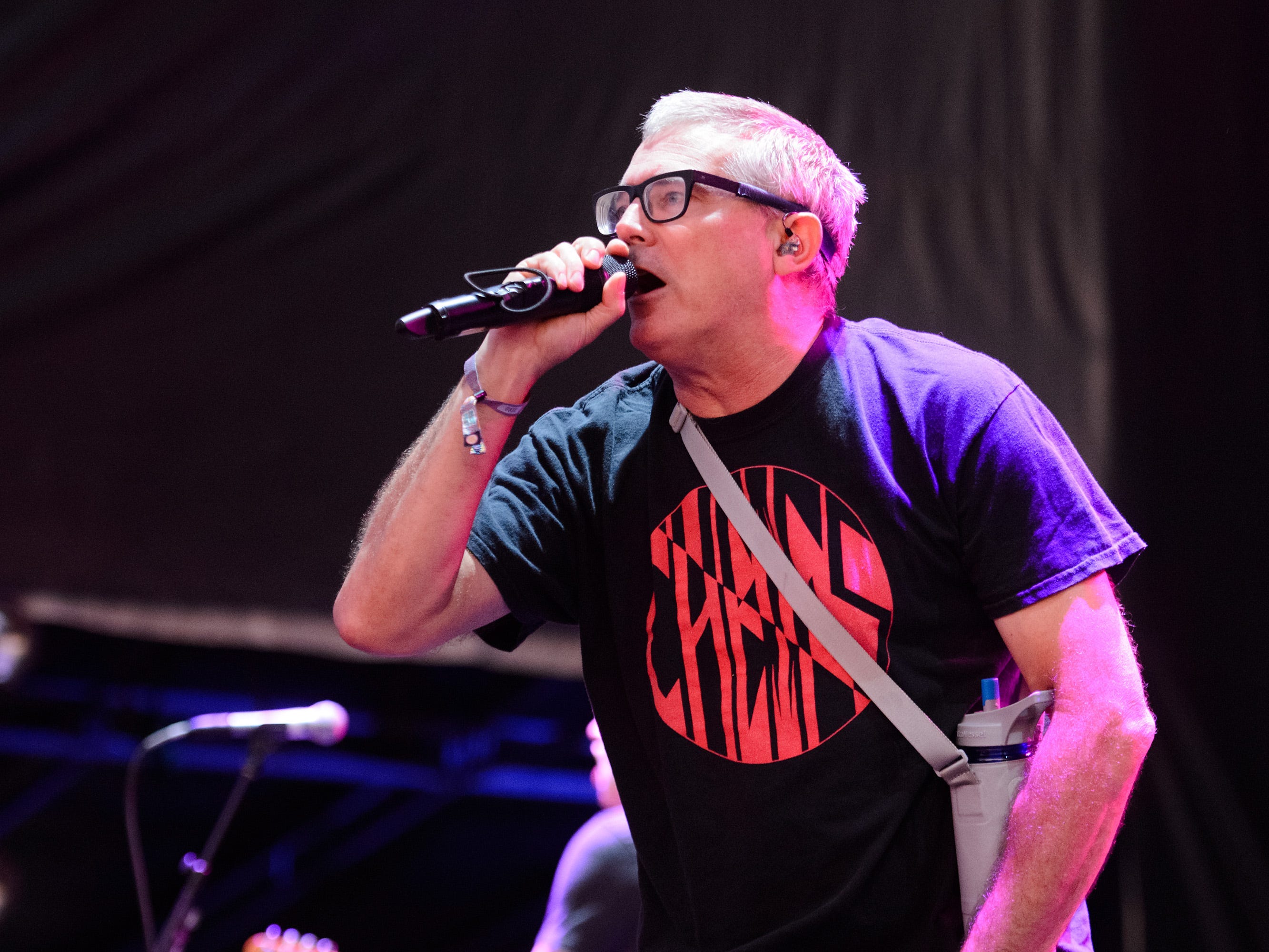 Daniel Boczarski/Getty ImagesMilo Aukerman of the Descendents performing in 2019.

In addition to fronting the Descendents, the band considered to be the forefathers of pop-punk music, Milo Aukerman worked for years as a biochemist.

Aukerman, who earned his bachelor’s degree and PhD from the University of California, San Diego, has been vocal about his struggle to balance his love of science and music. In fact, the band’s first full-length album, “Milo Goes to College,” is a nod to Aukerman’s departure from the band to earn his bachelor’s degree, according to a 2014 article in ASBMB Today.

Throughout the years, Aukerman balanced earning his PhD – and eventually working as a principal investigator at DuPont – with his life as a member of the Descendents. In 2016 after being laid off from his latest scientific job, Aukerman admitted to San Francisco Weekly that he wished he’d made music his main focus.

“I’m kind of kicking myself [because] it took me that long to figure it out,” Aukerman said. “Now I’m a hundred per cent all in for music. I started to realise that my science gig, that was supposed to be my stable career, and music was always just kind of an unstable, uncertain future kind of thing. But I had it backwards in the end.”

In 2019, Aukerman started the supergroup The PhDs, consisting of five punk rock musicians – including Dexter Holland and Greg Graffin – who all have master’s degrees or PhDs.