A single mother built a tiny house by herself after a divorce, and she says it changed her life 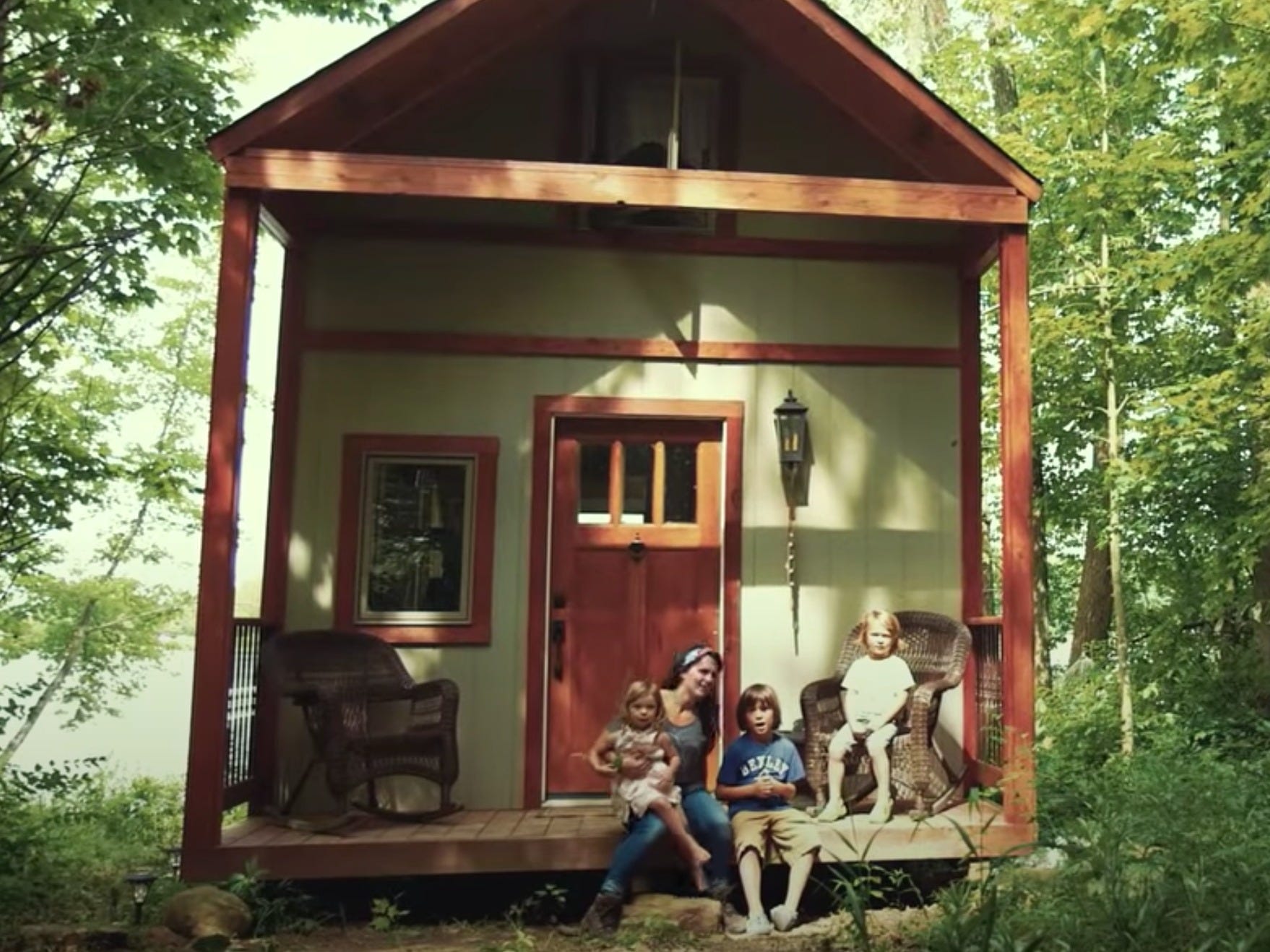 After a bitter divorce, Kelley Lewis knew she needed to start over.

At the time, Lewis was a single mother of three children living in Columbus, Ohio. She needed a project that would occupy her mind and that would pull her out of depression. She found the tiny house movement and instantly knew she wanted to build a tiny house on a piece of land as a vacation home for her family.

Here’s how Lewis single-handedly built the home nail by nail and how the process changed her life.

Kelley Lewis’ story begins back in 2008 when she fell pregnant unexpectedly and got married. 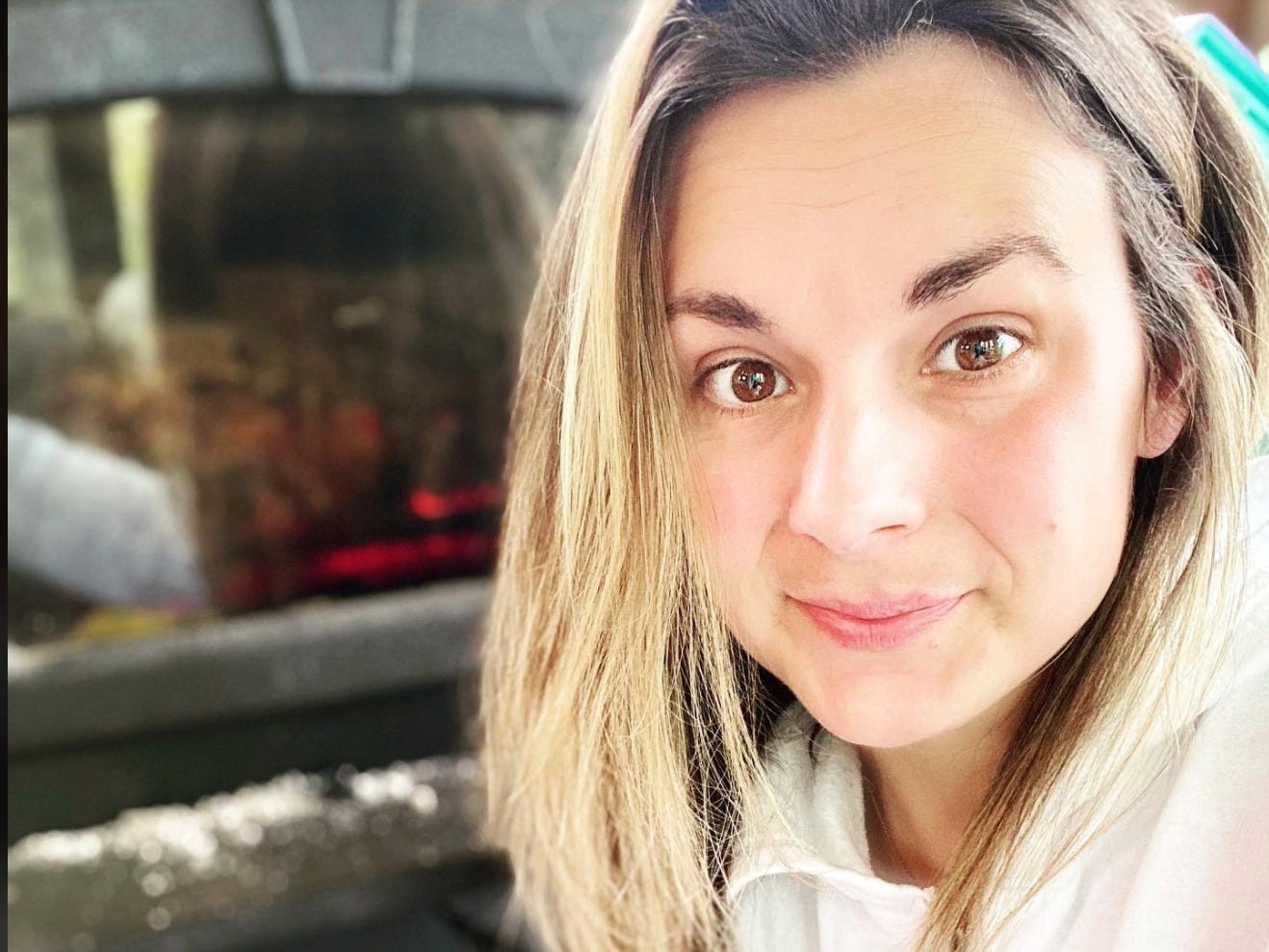 Shortly after getting married and giving birth at a young age, she accepted a job she didn’t love in social work.

“It was a culmination of all these really stressful and soul-breaking events, and I attempted suicide when my son was 10 months old,” Lewis said.

Although Lewis was hospitalized, she was determined to start her life over. In her hospital bed, she read books on how to start a daycare because that was her life’s dream.

“On a piece of paper, I made a rough outline of a business plan from the hospital,” she said. “When I got out of the hospital, I put in my two weeks’ notice at the job I had and then opened my own daycare, which I then franchised a few years later.”

When she was got divorced years later, she slipped into depression again and looked for a way to bring healthy creativity back into her life. 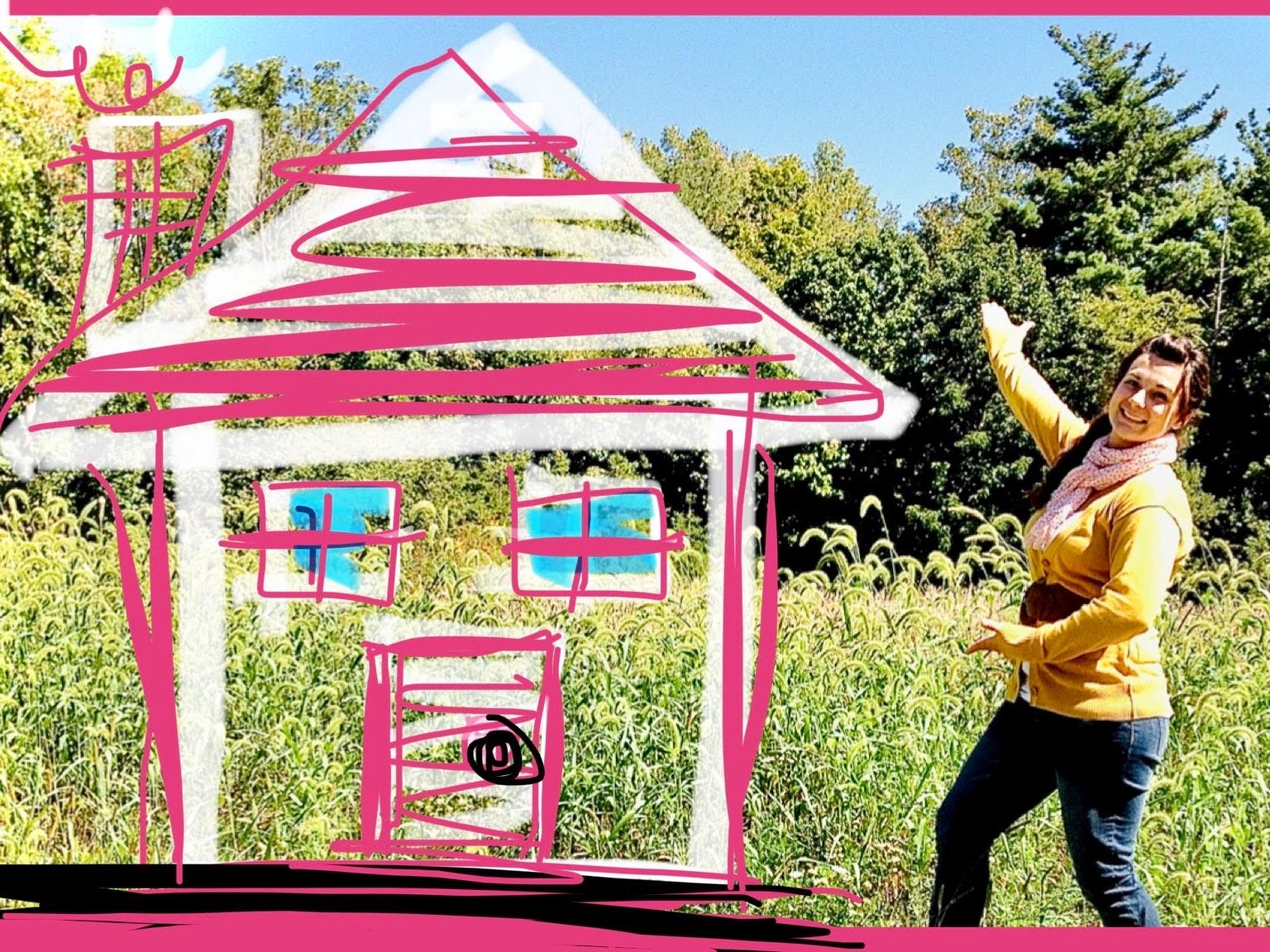 Courtesy of Kelley LewisLewis on her piece of land next to her planned house.

“In 2012, I went through a divorce, and it was kind of this release of this trauma and tragedy in my life,” she said. “I’ve never had an addiction to a drug, but depression kind of feels like a relapse in a lot of ways. Everything is fine when everything is fine but when it’s not fine, you start having the same relapse feelings of, ‘I can’t make anything better, life is better without me.'”

At this point, Lewis now had three children, so she had to deal with these emotions while being a mother. She said she recognised the feelings were the same as they were years ago when she attempted suicide, so she sought counseling. Slowly, she realised she wanted to do something constructive and was “looking for a way to rebuild my life.”

Her mother owned a house on a lake in South Vienna just outside of Columbus, Ohio, and Lewis learned that the developer was having trouble selling some plots of land around the lake, she jumped at the chance. She bought 1.5 acres of land for $US70,000 in 2012.

“I didn’t have a new business per se to occupy my time and interest and artistic abilities, so I bought a piece of land and thought, ‘This is the next thing I’m going to dive into,'” she said.

Although her original plan was to build a normal-sized house on the property, she fell in love with the idea of a tiny house. 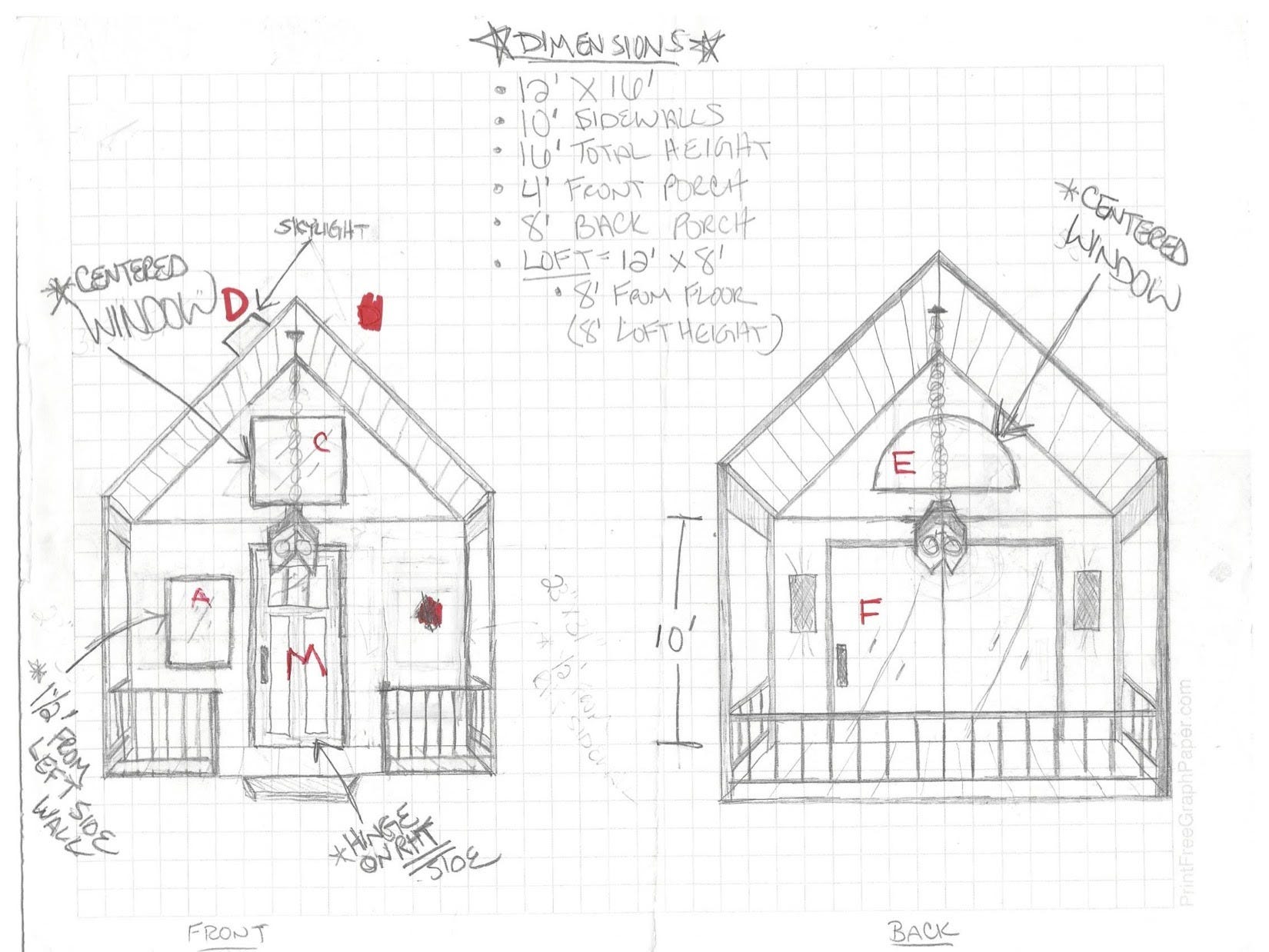 Lewis dreamed of building a large cabin-like house that she saw on HGTV. She had a picture of that dream house as the wallpaper on her phone for years.

“I then learned about the tiny house movement and then it became this whole snowball explosion of discovery,” Lewis said.

She never let the cabin dream house go, however. When planning and designing her tiny house, she decided to use the same colours, tile work, and lighting that the HGTV house had.

“I always thought even though I don’t have the actual HGTV house, I have my own mini version of it,” Lewis said.

Lewis pointed out that this house was never intended to be lived in full-time, as she lives with her family in Columbus. Instead, she wanted to build this house as a weekend retreat for her family.

In 2013, after the design process, Lewis got to work building most of the house on her own. 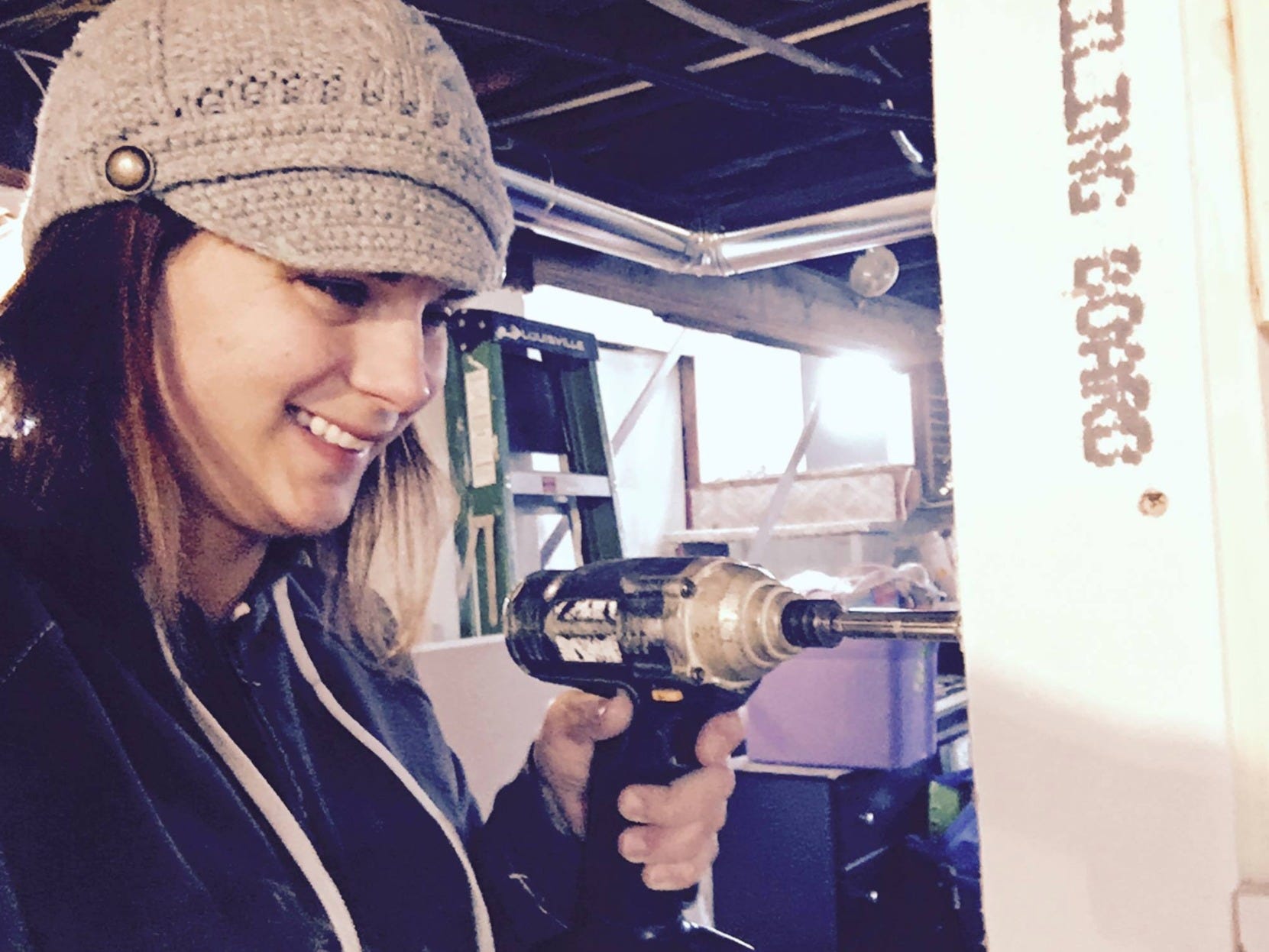 From the start, Lewis said she knew she was in over her head because she had very little building experience apart from a few renovation projects. This caused an ebb and flow of emotions for her throughout the project.

“I was diving into something I did not have a full scope of knowledge of what I was getting into,” she said. “There was a lot of love and joy, but there was also a lot of pain.”

Lewis said she did get some help throughout the building process, however. 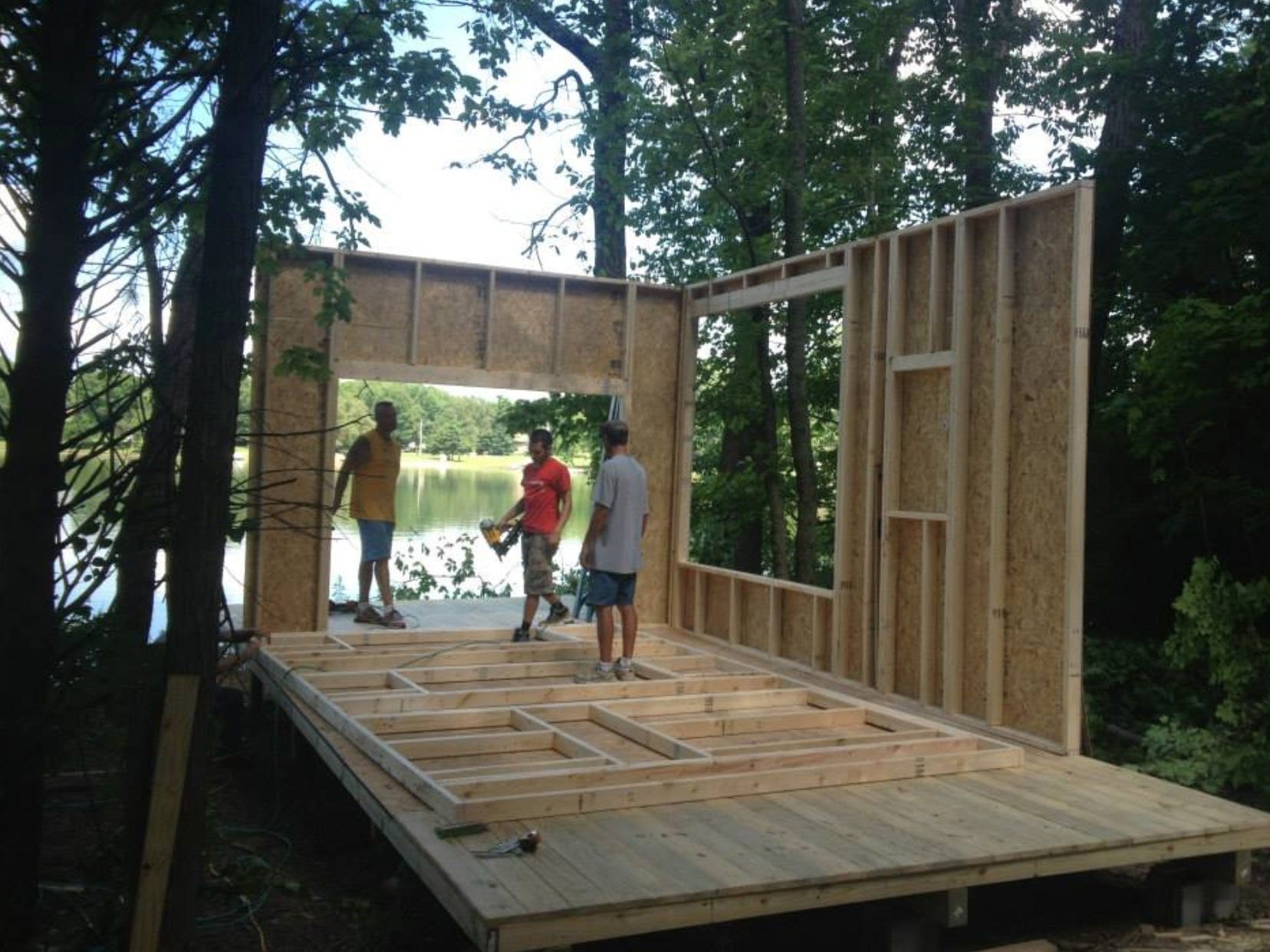 For example, she had a company build the frame of the home, and another company came to help with electrical. But she said she has built the entire interior by herself on weekends over the course of five years.

Throughout the five years of building, her children pitched in every now and then. 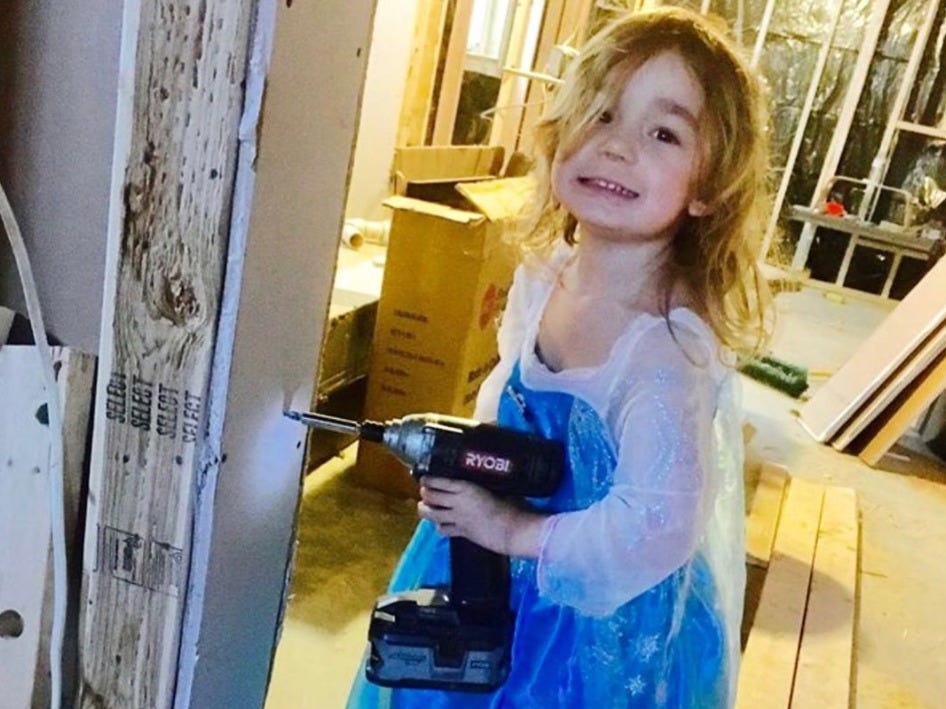 “It’s difficult to get anything done with a child around let alone construction,” she said.

Although it’s still a work in progress, Lewis said the 192-square-foot tiny house cost her $US30,000 to build. 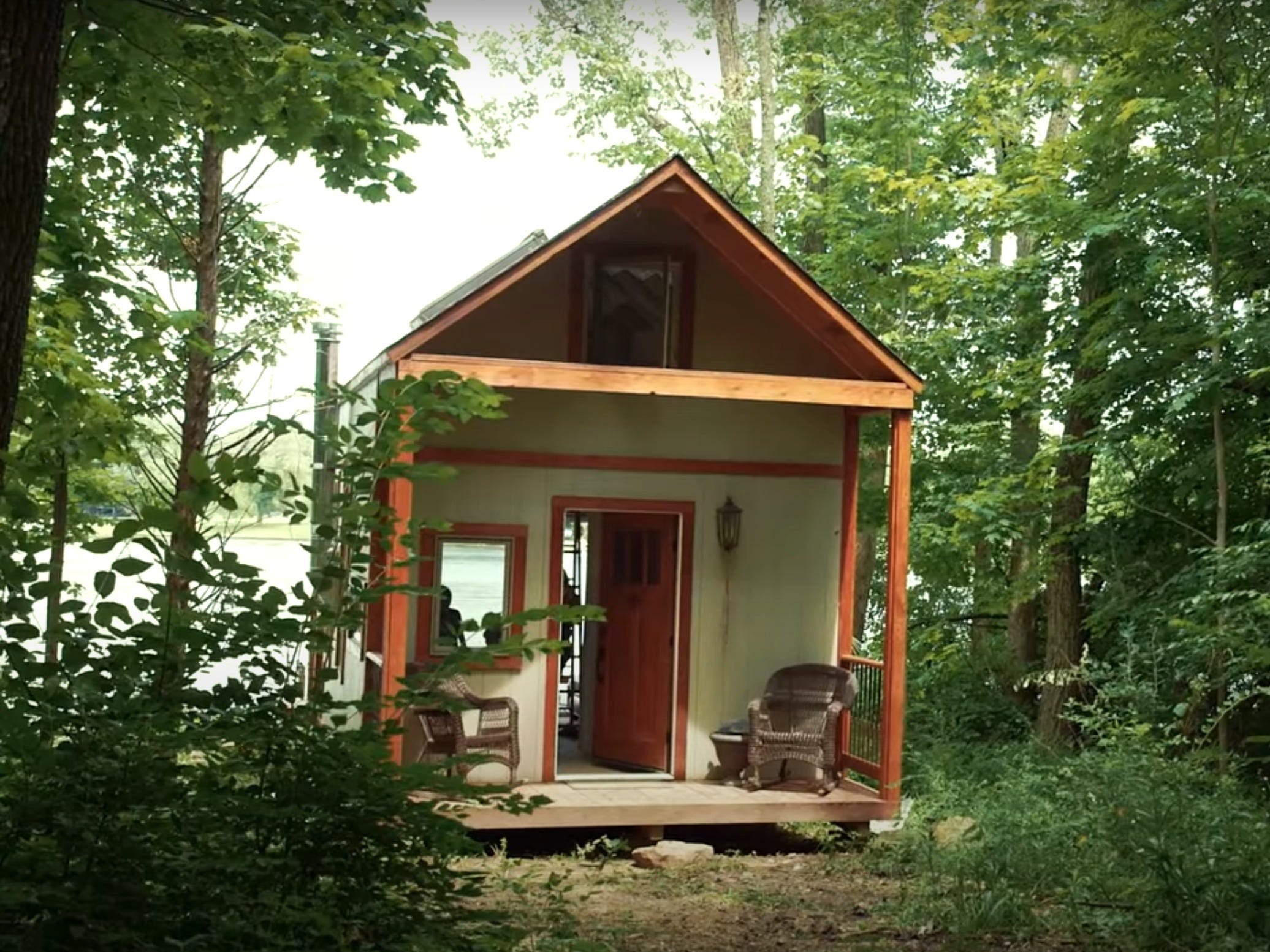 Stories/ YouTubeThe exterior of the cabin.

“It was very therapeutic,” she said. “As an artist, it as like the ultimate artist escape.”

Once inside the house, you find a U-shaped kitchen to the left. 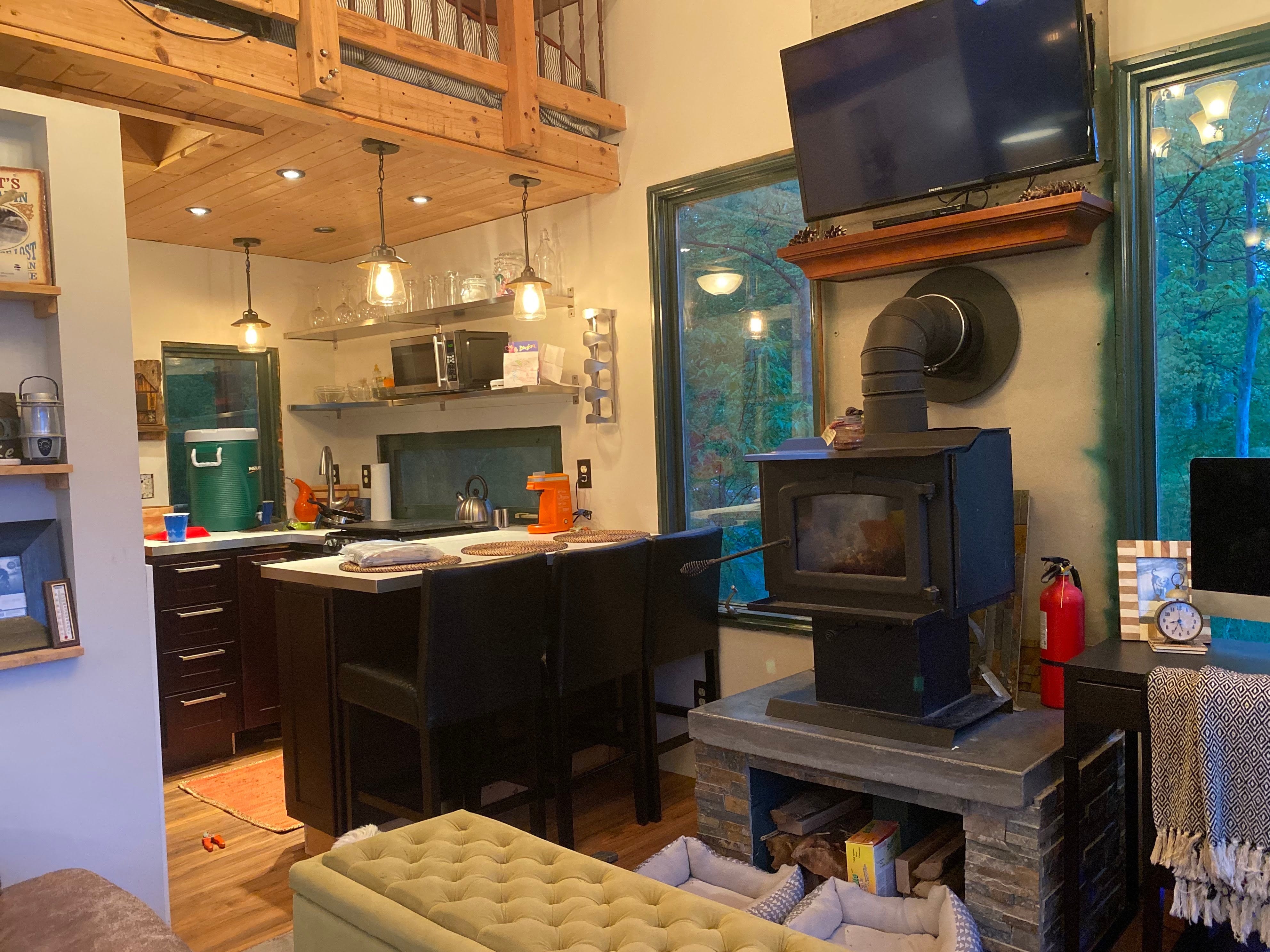 Courtesy of Kelley LewisThe kitchen and part of the great room.

There’s a breakfast bar, a very small fridge, and an RV stove. The green jug on the counter is filled with drinking water for the family because the filtration system from the lake does not provide the home with drinkable water.

With such a small kitchen, Lewis said she has struggled with storage. For a short time, Lewis was isolating at the cabin during the coronavirus pandemic. She went up to the cabin with a large stockpile of food. At first, she said she felt overwhelmed but after some time, she found a place for everything.

The breakfast bar separates the kitchen from the great room, which has 13-foot ceilings and overlooks the lake. 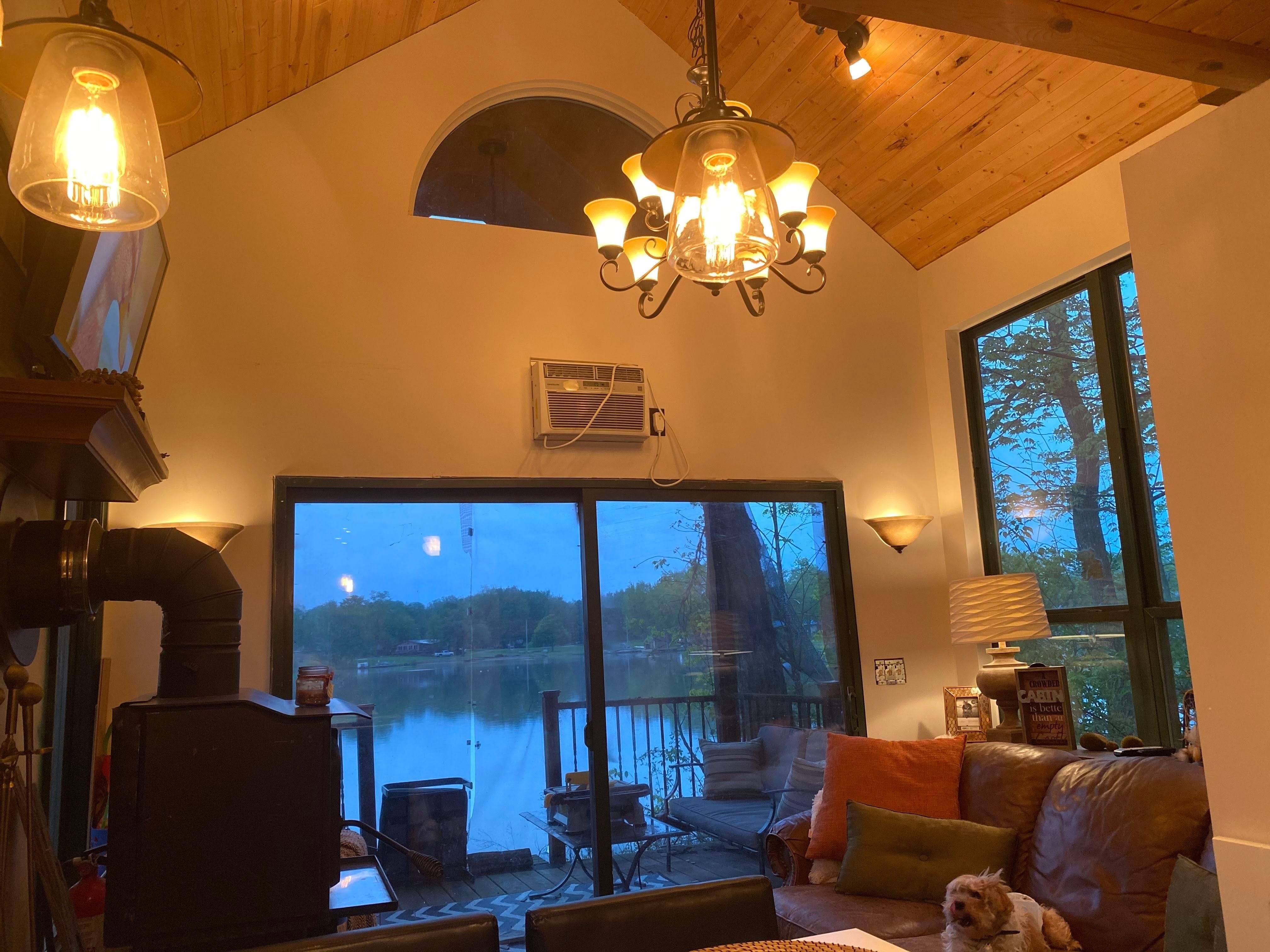 In the great room, there is a pullout couch, a TV, a work desk, and a wood-burning stove. Also, sliding glass doors in the great room lead to a back deck and the lake.

Lewis said every piece in the home is attached to a memory, such as the window behind the couch. 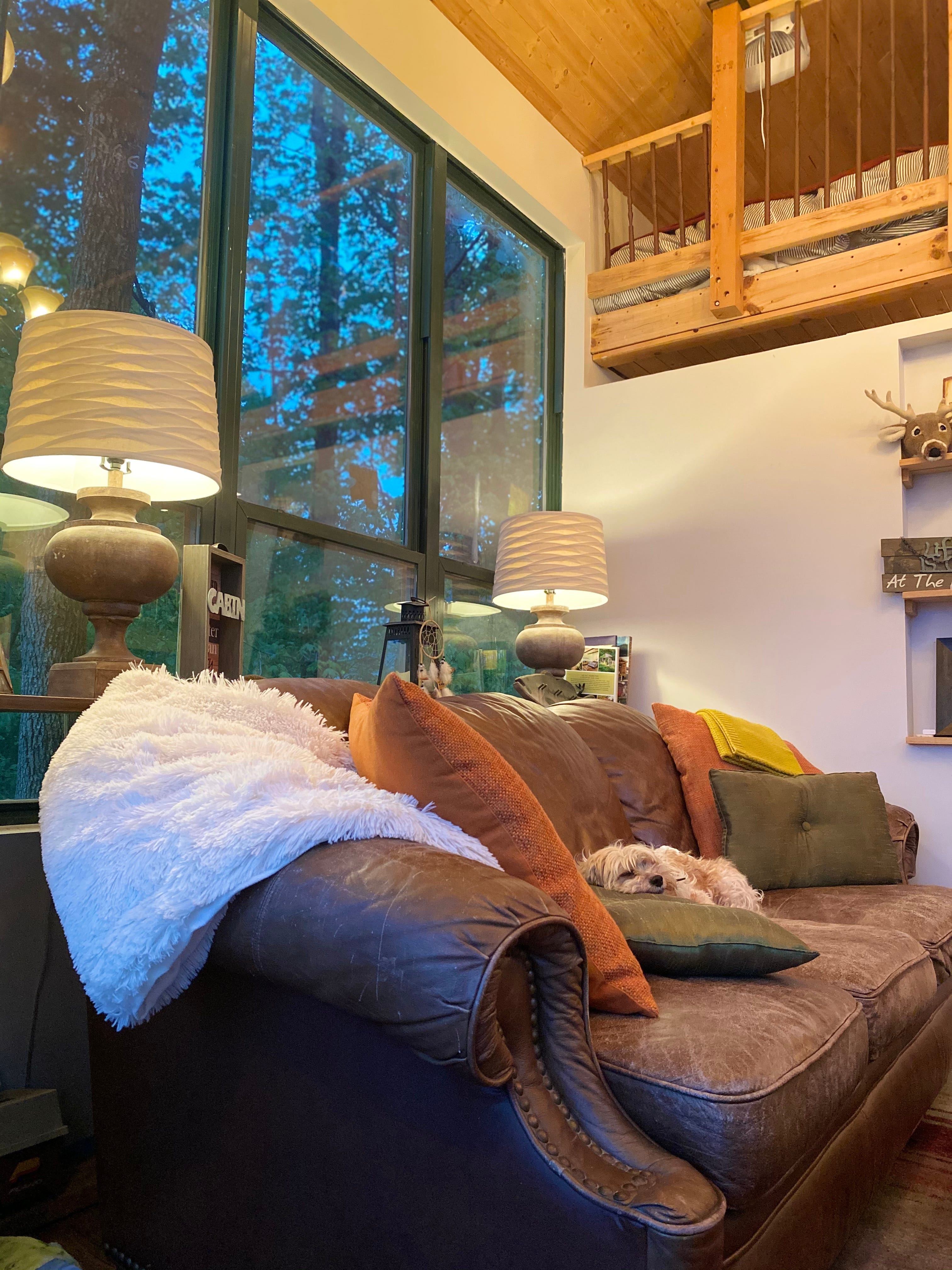 Courtesy of Kelley LewisThe large window behind the couch.

For example, when she bought the large 7-by-9 window behind the couch, she remembers picking it up and attaching it to the roof of her truck and driving three hours back to the house. But the window flew off the top of the car and shattered all over the road. Luckily, the company replaced the window and delivered it to Lewis.

Lewis said the wood-burning stove in the great room was the most difficult task she completed in the house. 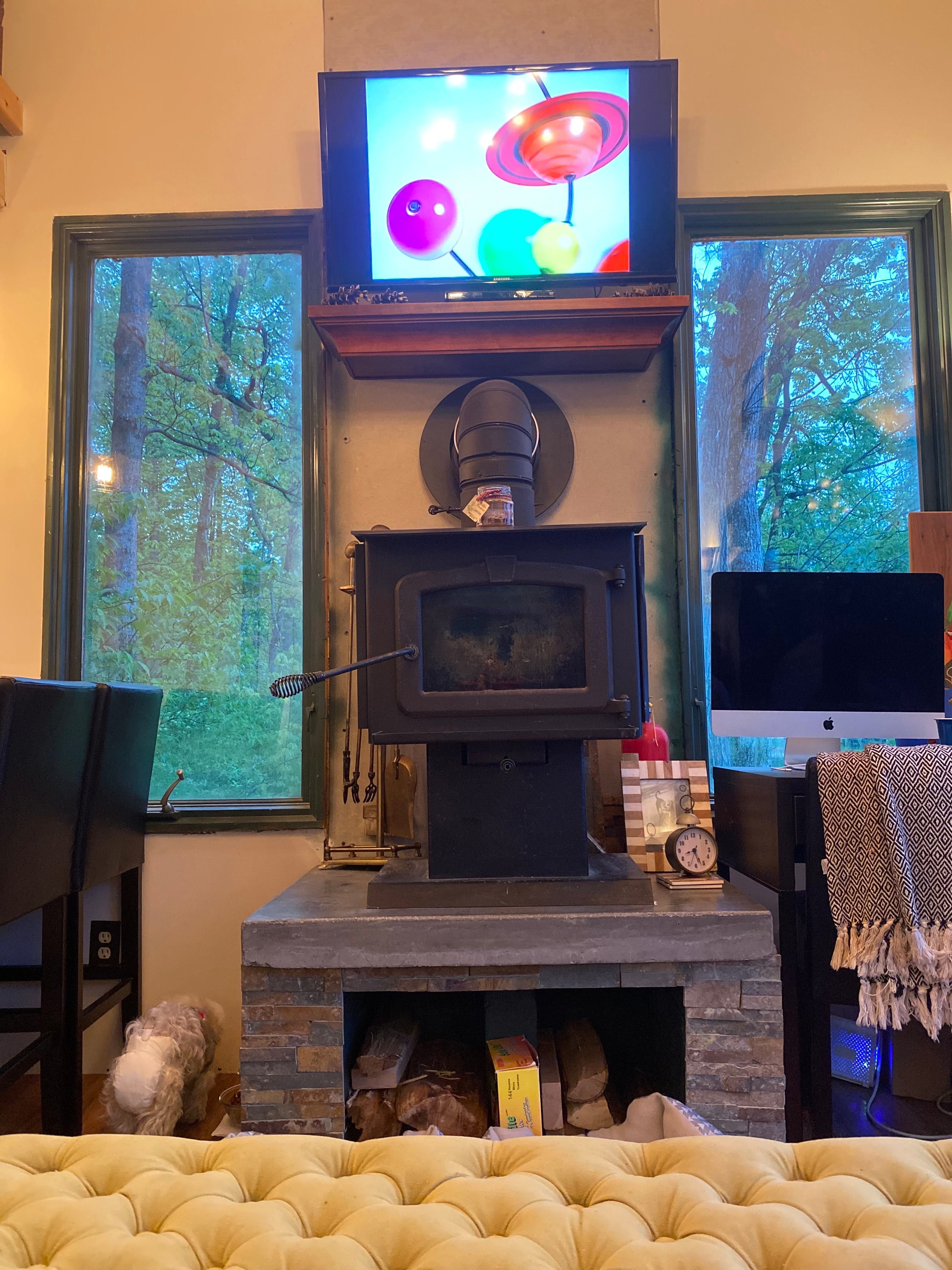 She spent a full month trying to get the stove installed. When she finally did get it in its place, the stove didn’t work. She decided it would just be a decorative piece because it frustrated her too much.

A week ago, however, she came to the house and made it her mission to get the stove to work because she needed it as a heat source. Lewis said she watched YouTube videos and taught herself how to get it started.

“I got the damn thing to work, and it was like this glorious moment,” she said.

Like the wood-burning stove, the water system is another challenge for Lewis, especially in the bathroom. 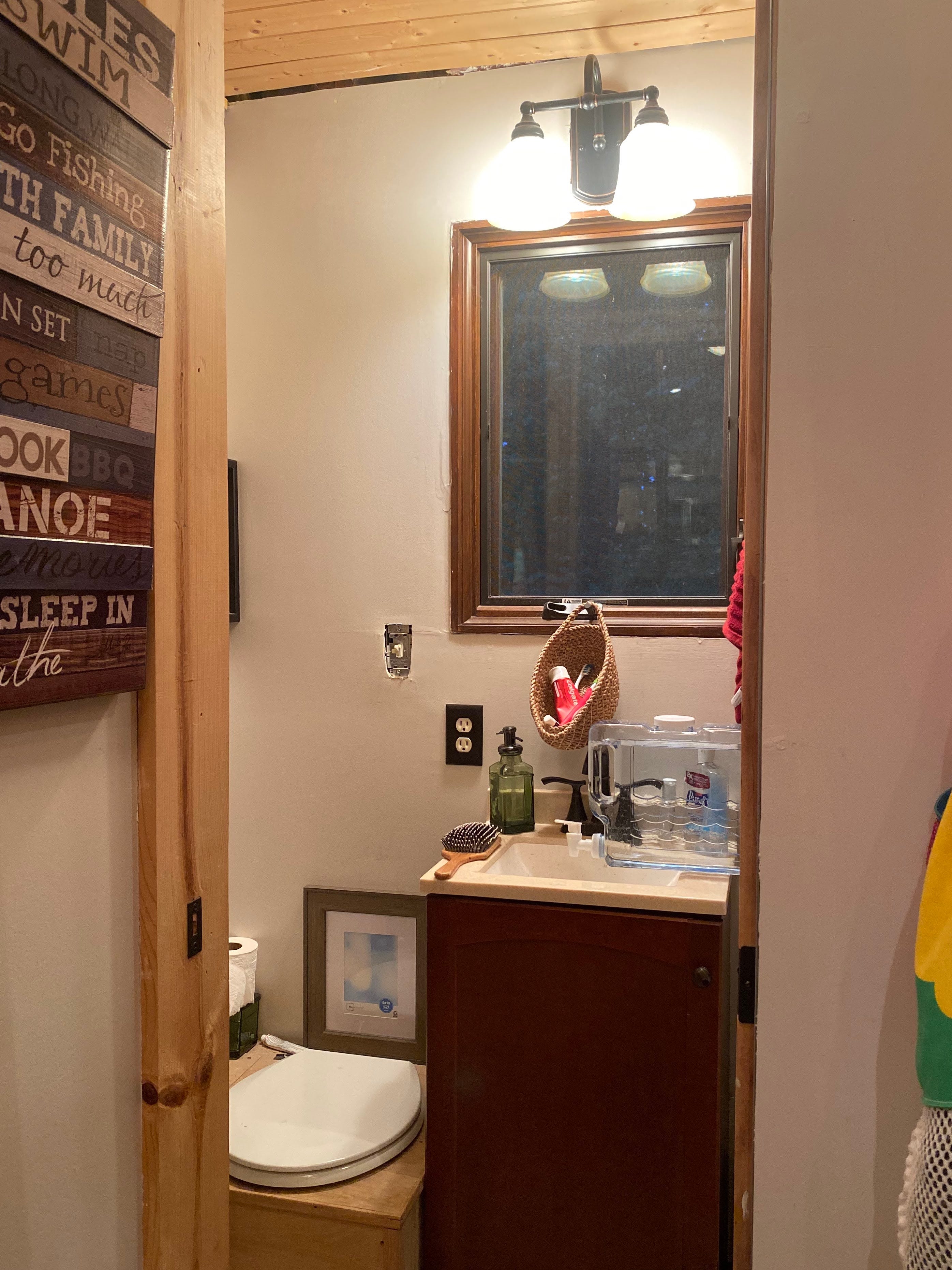 Lewis set up the home and plumbing so that a filtration system could take water from the lake and provide water for showers. However, Lewis said she has not been able to get the system to work just yet. Right now, she uses the home’s shower as a storage space and then bathes at her home in the city until she can figure out how to get the system to work.

The bathroom, which is to the right of the front door and directly opposite the kitchen, has a stand-up shower, a sink, and a composting toilet.

Back in the great room, you can look up and see the second-story loft. 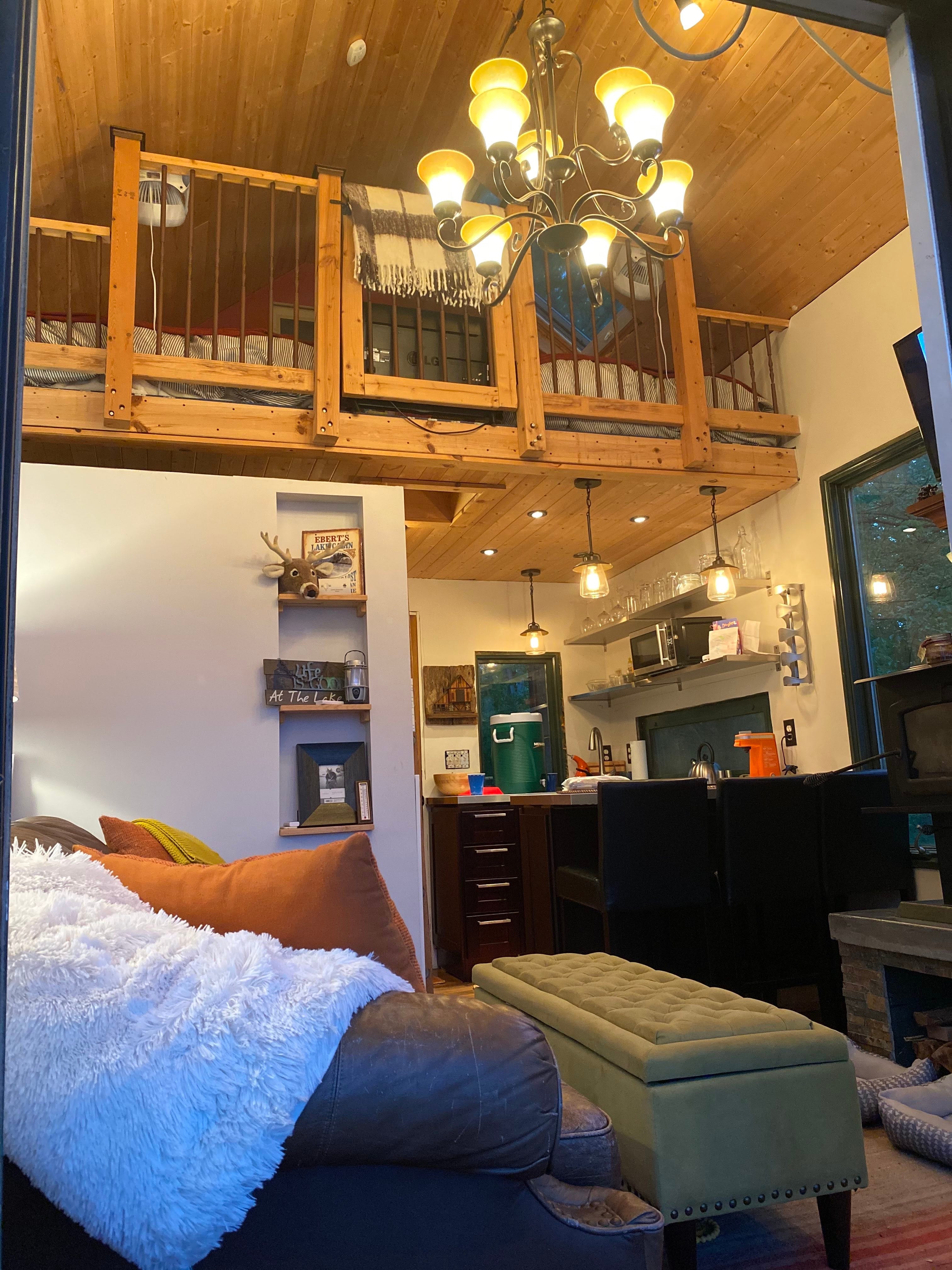 There is a ladder that leads from the great room to the loft.

The loft fits two full-size beds, so in all, the house sleeps six people. 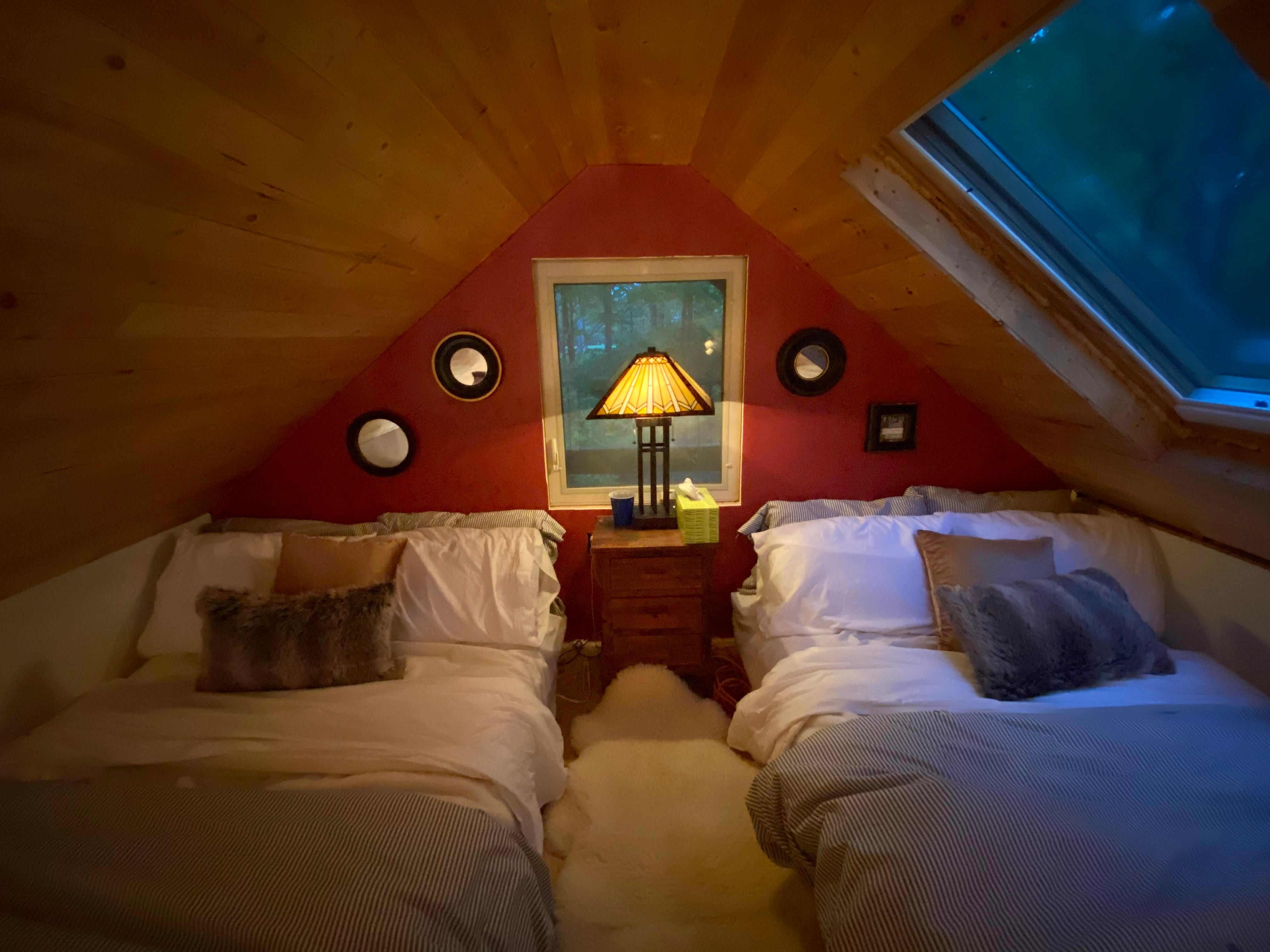 The loft also has a large skylight that Lewis installed.

“When you’re [lying] in bed, you can see trees and stars, and that’s pretty cool,” she said.

Lewis, who has remarried and welcomed a fourth child, says the tiny house is the best vacation spot for her family. 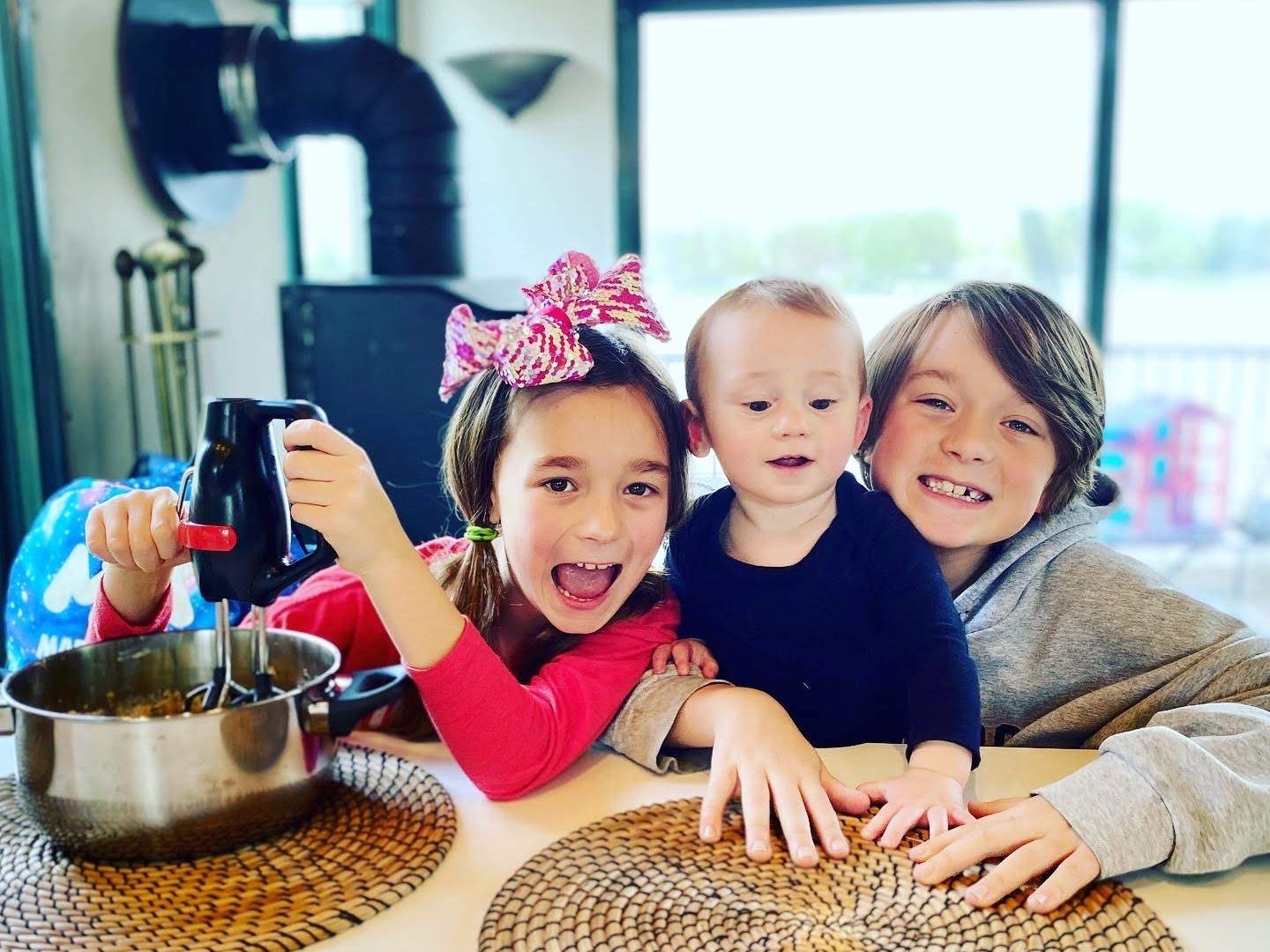 “Taking my kids on vacation was not a feasible thing for me to do at the time,” she said. “If you go anywhere, then you have to drive. If you want to go somewhere farther, you have to fly. It gets very expensive, so this was a way for me to have a place to adventure and a vacation spot for my kids.”

Since she and her kids live in the city, she said this home is a perfect way to get them out in nature. They love running around, going in the water, and getting dirty while at the house, she said.

Although it’s a work in progress, the home remains a symbol of hope for her. 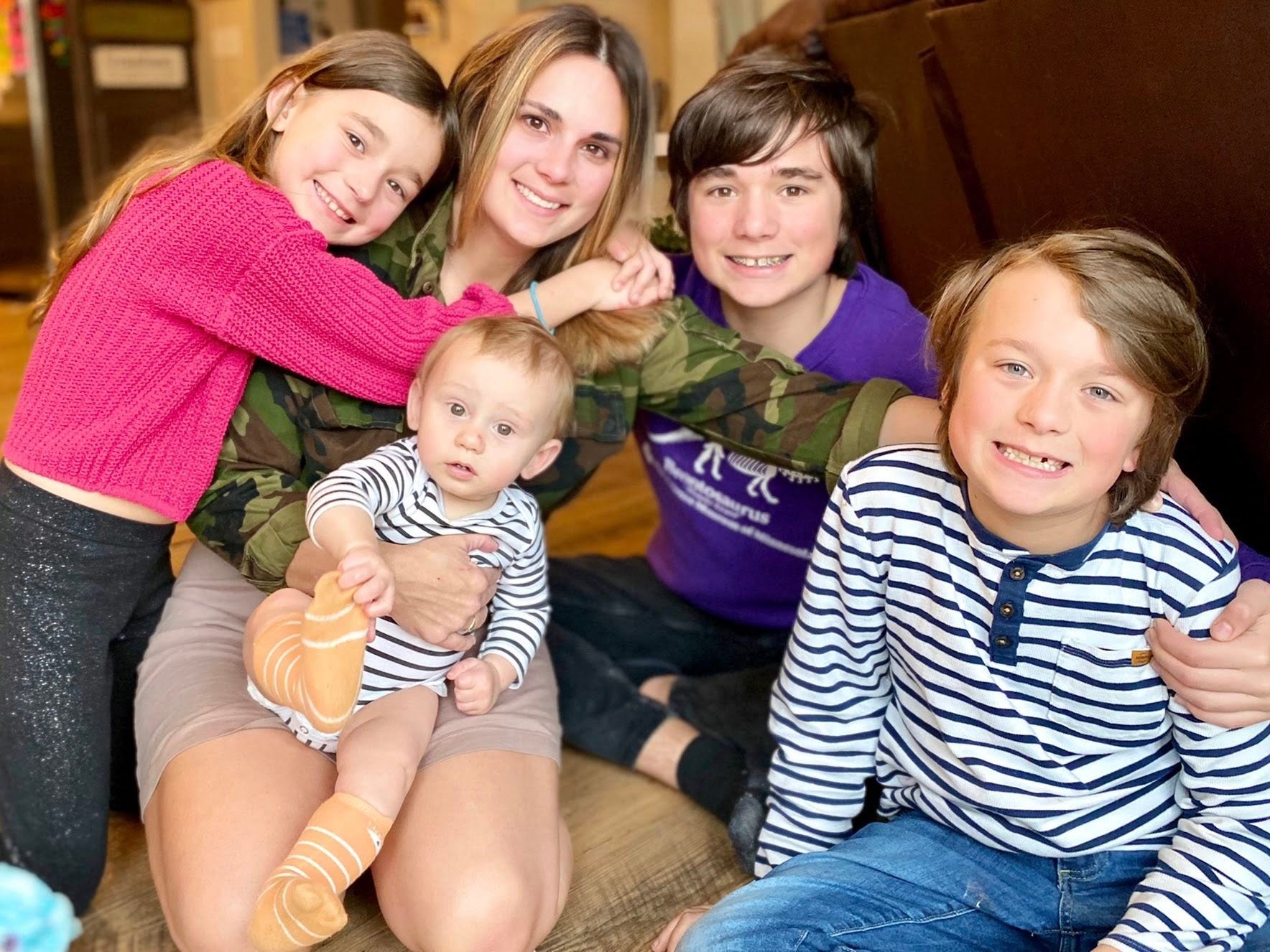 Courtesy of Kelley LewisLewis and her family.

“It’s ongoing,” she said. “It’s not an event that just came and went. It’s something that we get to continue to visit and utilise and continue to build more memories with.”

Much like her struggle with mental health, the house is a work in progress, something that she and her family can visit and work on for the years to come.

“This has been such an intimate project whether it was to combat depression or have an artistic outlet,” she said. “When I walk in here, it’s kind of like a time capsule or a living storybook. It has more memory and purpose and meaning than anything else I have ever done.”