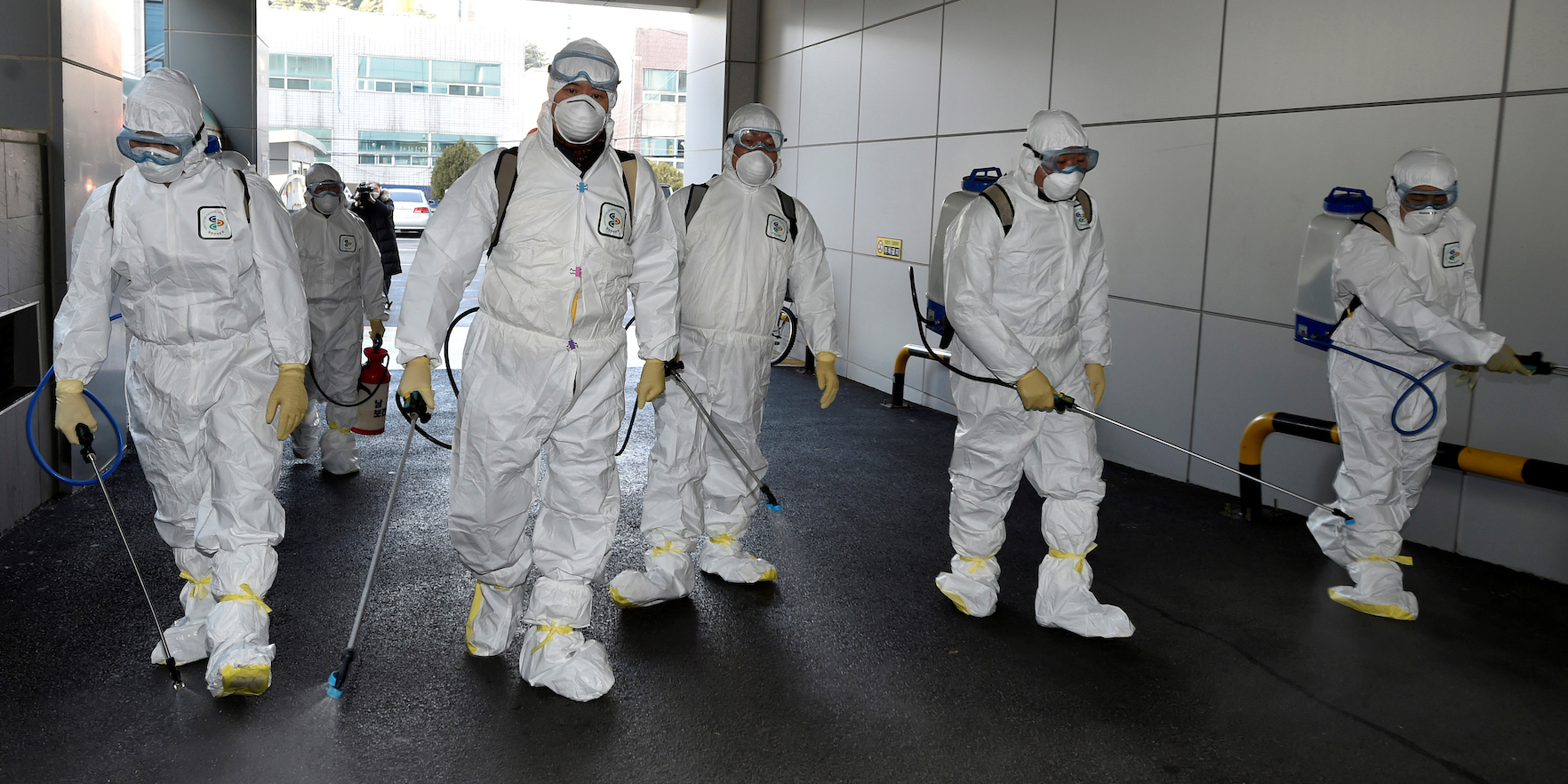 A South Korean city has gone on the offensive after two clusters of coronavirus cases, which have been traced to doomsday cult church and a hospital nearly tripled the number of patients in the country.

The Korea Centres for Disease Control and Prevention (KCDC) said on Thursday that 53 additional patients have tested positive for COVID-19. The day before, 20 new cases had been reported. There are now 104 coronavirus patients and one fatality in South Korea.

This uptick mostly comes from 43 members of the Temple of the Tabernacle of the Testimony, a fringe religious faction in the city of Daegu, and 15 people at a hospital in Cheongdo County. The country’s first coronavirus death also occurred at this hospital, according to The Washington Post.

The church at the centre of this outbreak is part of the Shincheonji Church of Jesus, which was established in 1984 by Lee Man-hee and counts about 200,000 South Koreans among its ranks. Lee claims to have taken on the mantle of Jesus Christ and purports to have the ability to save 144,000 people on Judgment Day by taking them to heaven with him, the Guardian said.

“Most believers accept this large cluster of cases occurring at the church as a test of their belief,” Park Hyung-tak, who leads the Korea Christian Heresy Research Institute, told the South China Morning Post about the group that views itself as “chosen” and “favoured by God.”

A 61-year-old churchgoer was diagnosed with the coronavirus on Tuesday, prompting health officials to ask the church’s thousand other followers to put themselves in quarantine. So far, South Koreans who tested positive for the illness had either travelled to mainland China or been in contact with someone who had. It remains unknown how the woman, who has been dubbed Patient 31, contracted COVID-19, Reuters reported.

However, since the number of coronavirus patients has jumped since she became ill, with many coming from the “same Korean cult,” this is being considered as a “super-spreader” event, the KCDC said to the South China Morning Post in a press release.

Followers have been asked “to stay at home isolated from their families,” Daegu Mayor Kwon Young-jin said, while Jung Eun-kyeong, director of the KCDC, urged people who visited both the church and the hospital report any symptoms to officials.

The church has shut its facilities across South Korea and encouraged churchgoers to partake in online prayer sessions in response to the outbreak, the South China Morning Post said.

It also released a statement on Thursday, decrying the barrage of criticism and defended itself against being cast as “the main culprit of coronavirus transmissions,” blaming those who have deemed it a “cult” for the wrongful accusations, the Washington Post said.

Pastor Shin Hyun-uk, an anti-Temple campaigner, is not mollified. He is worried that more cases may be linked to the Temple of the Tabernacle of the Testimony, because of its so-called “study rooms” where believers are taught the church’s evangelical ways.

“Their so-called ‘harvesters’ go to other Christian churches, take part in prayer sessions there and engage in other activities in order to woo away ordinary believers,” he told the South China Morning Post. “I doubt whether the church would come clean about the movements of its believers who were with the 31st patient and cooperate with authorities in tracing contacts for fear that it would reveal their secret evangelistic activities. This is really a worrisome situation.”

The South Korean newspaper NoCut News was able to interview a church believer, who shared that Patient 31 was in close proximity with other churchgoers during prayer services on February 9 and 16, both of which are being investigated by authorities.

There is an 8-story Daegu building that houses the temple. In it, married women convene on the fourth floor, married men on the seventh, and unwed men and women gather on the eighth floor, the unnamed source told NoCut News, which was reported by the South China Morning Post.

At these prayers sessions, churchgoers sit close enough to each other that they can “rub their shoulders,” while praising God “at the top of their [voices] for about 30 minutes, and listening to sermons for another hour. Afterward, people converse in small groups while married women organise potluck parties.

People who donned face masks as a precaution against the coronavirus “were told to remove [them] while attending prayer sessions,” the follower told NoCut News.

Temple of the Tabernacle of the Testimony said in its statement to the South China Morning Post that its leaders have been urging believers since the end of January to stay home if they had travelled internationally or were feeling unwell. The KCDC is looking into a possible connection between the church and the hospital because officials say the 31st patient went to the hospital in early February.

A 63-year-old man, who had been bedridden at the Cheongdo hospital for over two decades, died of coronavirus, Yonhap said. But people in a locked psychiatric ward have also contracted COVID-19, the South China Morning Post said, prompting all the hospital’s patients and staff members to undergo testing.

Life comes to a halt in Daegu, transforming it into a ghost town

Daegu residents have been asked to stay home as officials brace for more cases, Kwon said, stressing, “We are in an unprecedented crisis.”

To try and control the spread of the coronavirus, extreme precautionary measures are being enforced at Kwon’s orders. Streets in the usually busy city, which has an estimated population of 2.5 million people, have lost their hustle and bustle as kindergartens and public libraries have been closed, and shopping malls, restaurants, and movie theatres lie deserted, Yonhap reported.

Schools have taken the unprecedented step of delaying the start of their spring semester, which usually kicks off in March. And a concert in which BTS and other K-pop stars were expected to perform at Daegu Stadium has been postponed from March 8, but it’s unclear when the show will be rescheduled.

South Korea’s Defence Ministry has forbidden troops stationed in Daegu from welcoming guests and leaving their barracks. Similar restrictions are in place at a US military base in the city.

“Daegu lockdown” and “Daegu church” were among the top searches on Naver, a popular South Korean internet portal, with people discussing whether the city should be placed on lockdown and shut off from the rest of the country – similar to what Chinese officials did with Wuhan, the epicentre of the coronavirus outbreak. A KCDC official told Reuters that such a measure is not yet on the table.

But people took to social media to document the deserted city.

“It’s like someone dropped a bomb in the middle of the city. It looks like a zombie apocalypse,” Kim Geun-woo told Reuters. “Even Dongseong-ro Street – the most crowded centre of the city – is empty.”