Behind the scenes of TV's most iconic shows about the ultra-rich: 3 set designers dish on how they brought the penthouses and oceanfront mansions of 'Succession,' 'Big Little Lies,' and more to life 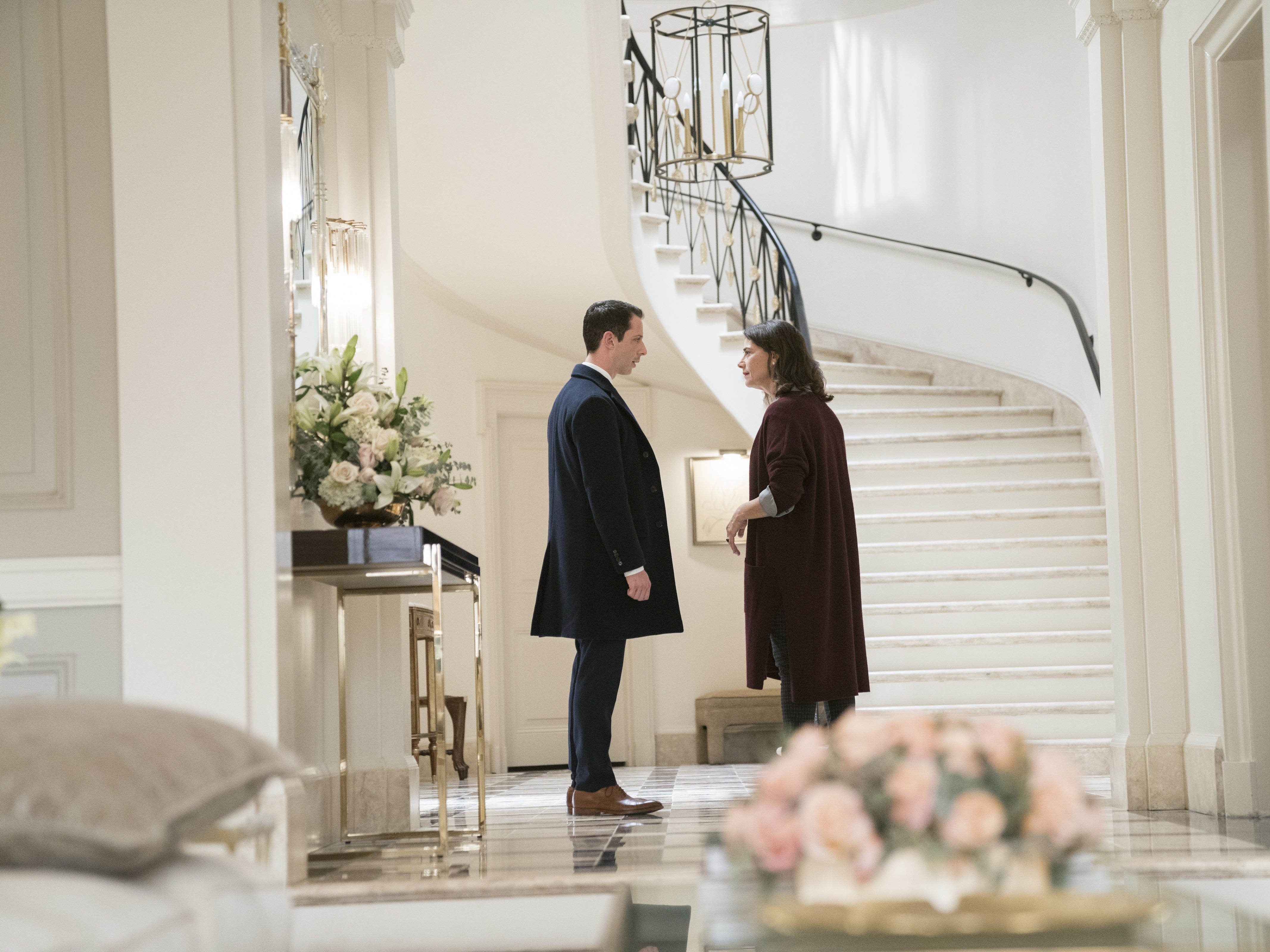 If you want to see how one percenters live right now, just turn on the TV.

From the hedge funders of “Billions” to the media moguls of “Succession,” the TV anchors of “The Morning Show” to the murderous California clique in “Big Little Lies,”a slew of recent shows offers a glimpse into the lives and homes of the uber-rich.

Each of those series has its own aesthetic, but there’s a consistency between them, too – call it the New Rich Look. But what does that mean, and how do you create it? We talked to the three people who should know: the set decorators and designers whose creative drive shaped the look and feel of all those shows.

‘Billions’
started it all

Michael Shaw is the production designer hired to establish the milieu in which the cat-and-mouse story of “Billions” on Showtime would take place. He says it teed up the New Rich Look.

“We were the first of these shows to come along in this aesthetic,” he said of the show’s debut in 2016. “Shows about rich people were about millionaires, but everyone can wrap their head around that. We wanted to show how billionaires live.” 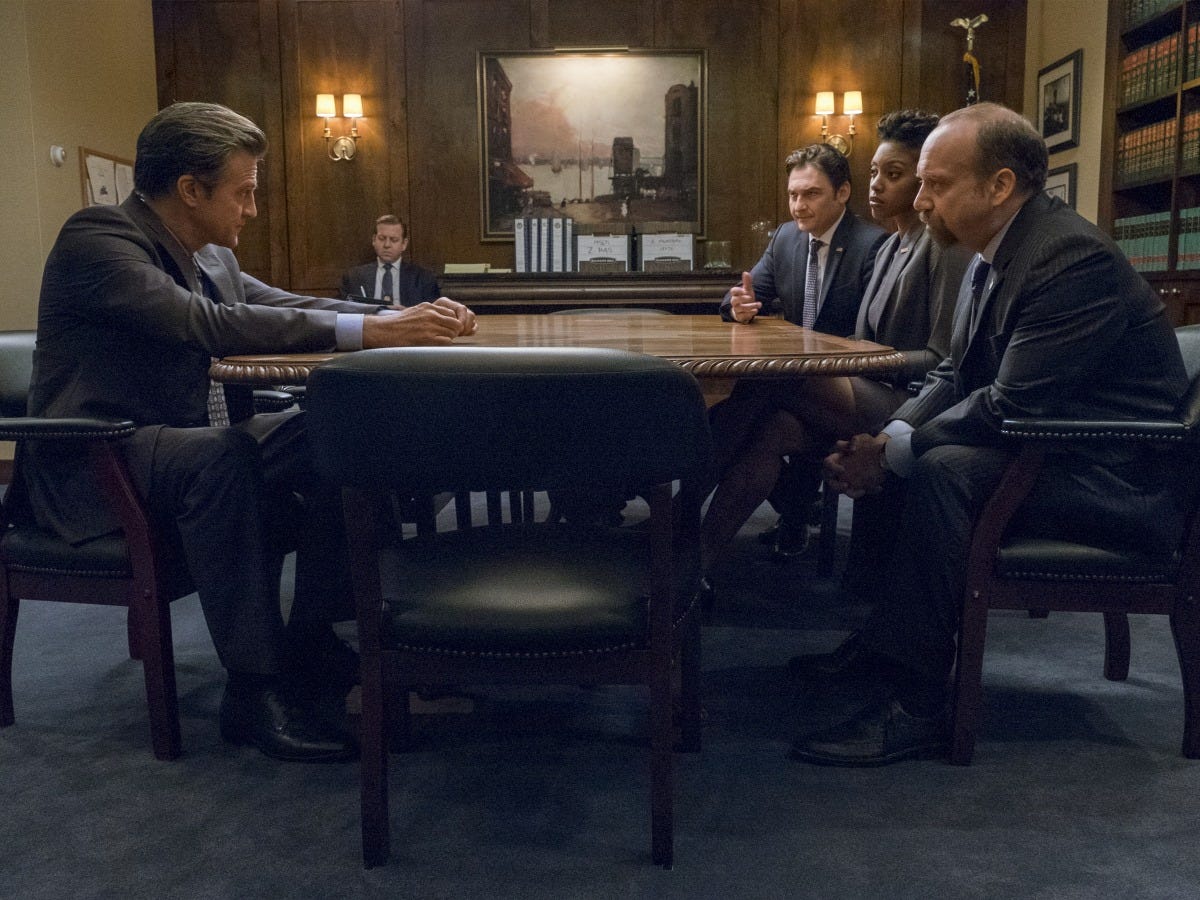 ShowtimeOn the set of Showtime’s ‘Billions.’

The answer, he found, lay in one idea: creating a world where effort of any kind has been taken away.

Shaw toured real-life billionaires’ homes on Long Island, where he saw pantries with every brand of cereal available and decanted into glass jars like an on-demand, upscale supermarket. He found homes where staff members included someone whose sole job was to do laundry all day so fresh towels were warm and ready at any moment.

At the same time, he emphasised, there’s a strangely sterile feeling these New Rich spaces.

“It’s probably their third or fourth home, and pretty much all been designed by a designer, so it’s lacking a little bit of personality,” Shaw explained.

Showtime‘Billions” Axe is the CEO of multibillion-dollar hedge fund.

Clients’ input might be focused on bragging rights – going to the quarry in Italy to help that designer choose a piece of marble, perhaps. “It’s like trophy hunting, and going on safari to kill a water buffalo. You can have friends over and talk about the experience.”

The home where Damian Lewis, aka Axe, lives in the show is one such tertiary home: The mansion, in real life, belongs to a finance exec who bought it and spent five years rehabbing it with an interior designer while living elsewhere. He consented to hold off moving into the home while season one was filmed. After the show was a hit, the cachet of his connection to the show meant he waited a further year to take possession.

The real-life owners of the Hamptons home that Axe is purported to own were just as thrilled to allow the crew a glimpse of their house.

The property – valued in the tens of millions – is the second house on the block they own. “They were thrilled to have us there, and they gave us wrap gifts,” Shaw said.

‘Succession’
followed on – and amplified the idea

One man who likely could afford several homes in that same street? Logan Roy, the Murdoch-inspired mogul at the centre of HBO’s “Succession,” played by Brian Cox. After the pilot was filmed, production designer Stephen H. Carter was hired to help expand its world into a full season, the first of which aired in 2018. 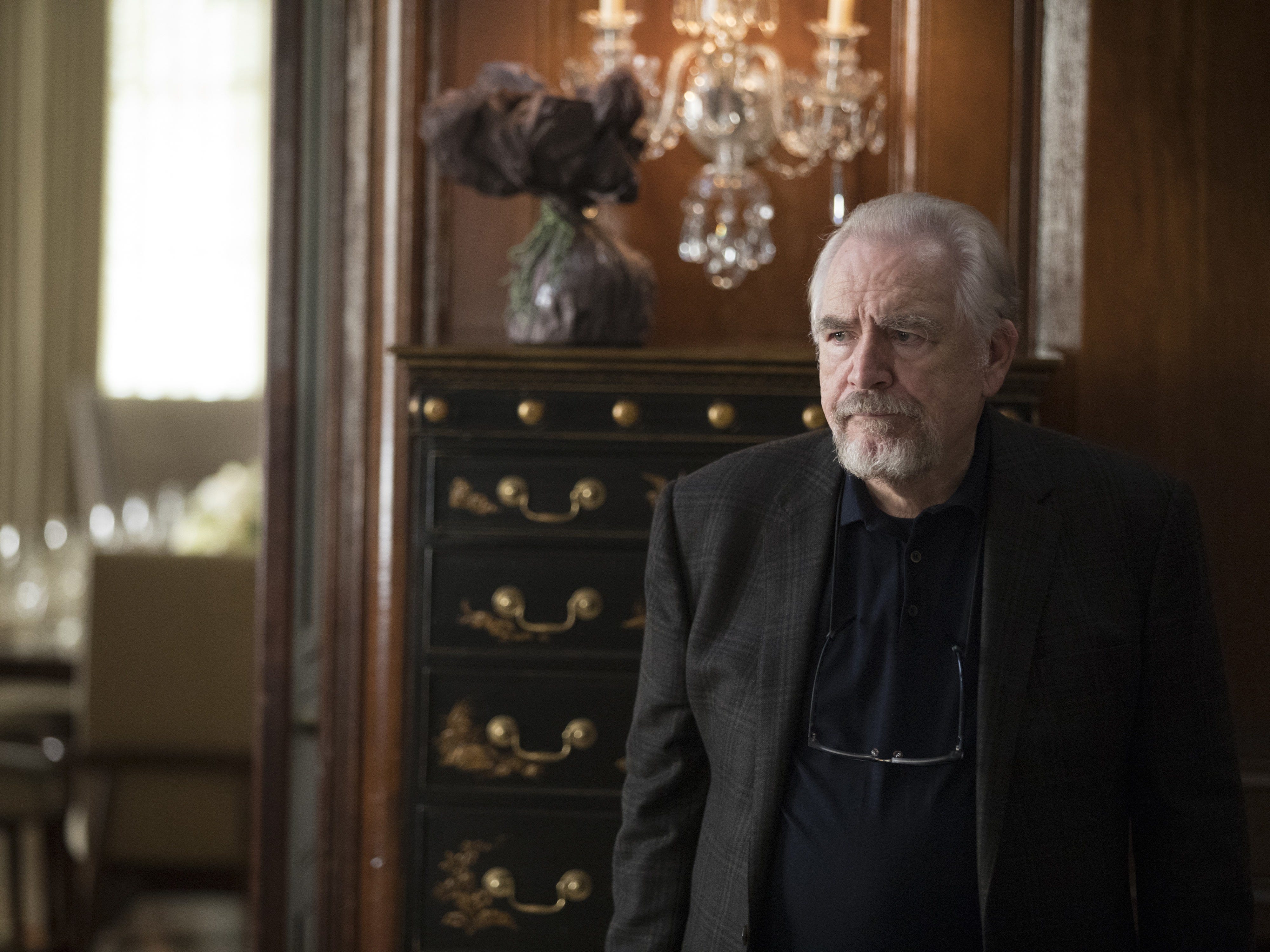 Carter studied acting before pivoting to design. He focuses on creating spaces that he calls “playable” – with enough room for a full cabal of characters to move around in naturally. That underscores the grand scale of the show, where the director can choose to rack focus, and shift to a secondary character deep in the background at a key point, rather than a simple, stage-style wide shot.

“It makes the camera feel more like paparazzi,” Carter said – an implicit nod to the celebrity and the wealth of the Roys.

The anchor location of the show, of course, is the apartment of the paterfamilias on Fifth Avenue – the so-called Millionaires Row, across from the Met Museum. For inspiration, Carter looked to the real-life homes of the Bronfman brothers, heirs to the Seagram empire.

The military trappings that decorate the space are, per Carter, a deliberate jab: “Logan has never served in the military, but therefore feigns a respect for military and Roman history.” The designer channeled a 19th-century robber baron when conceiving that interior, which was built out on a set; rather than steel or railways, per Carter, this mogul’s currency is information.

There’s another precious commodity in the New Rich Look: privacy. Consider the offices of Waystar, which were filmed in 7 World Trade Centre.

“Everyone can get a glimpse of what everyone else is doing, which undermines any sense of security,” Carter explained. It’s a bold production choice, as directors often shy away from spaces filled with reflective surfaces that can inadvertently catch images of staff or cameras. Instead, it’s become a visual tool for the show: Look at scenes that start with a reflection, then shift focus, double-dealing on the viewer much as a Roy might double-cross an adversary.

Jennifer Aniston was a well-placed advocate for ‘The Morning Show’

Wells had unexpected help from the show’s star, Jennifer Aniston, who plays neurotic news anchor Alex. Multi-millionaire Aniston understands the New Rich Look firsthand and was, per Wells, heavily involved in every aspect of creating the apartment for her character.

“The first thing we did was, I went to her house and she showed me how she lived, as that apartment had to fit her taste – I don’t know there was that much separation between her and the character in that way,” Wells told Business Insider. “There wasn’t a thing [on the set] she wouldn’t notice: not one picture frame, not the teeny, tiny handles on the cabinet in the hallway. It was designed to the hilt from the word go.”

Much of the artwork was a personal choice for Aniston. It was supplied by her friend Portia de Rossi’s startup General Public, which sells reproductions of original paintings. Marble was crucial to evoke what Wells calls Alex’s “stratospheric” wealth, too – though in this case, it was real, as were the wooden floors. It was the first time Wells had ever used real marble on a set, and she had to shoo staff away when they came in after a rainstorm to avoid stains.

Thankfully, she had her largest budget ever.

‘Big Little Lies’ and the California vs. New York face-off

Amy Wells also worked on HBO’s “Big Little Lies,” the only one of these shows that takes place outside New York – and for which, fittingly, the vibe is different.

For this show, Wells explained, her team devised a rule: The closer someone’s home was to the water, the richer they were supposed to be. Zoe Kravitz’s Bonnie lives in the woods, denoting her lower status, while the oceanfront mansion of Nicole Kidman’s Celeste telegraphs her wealth. 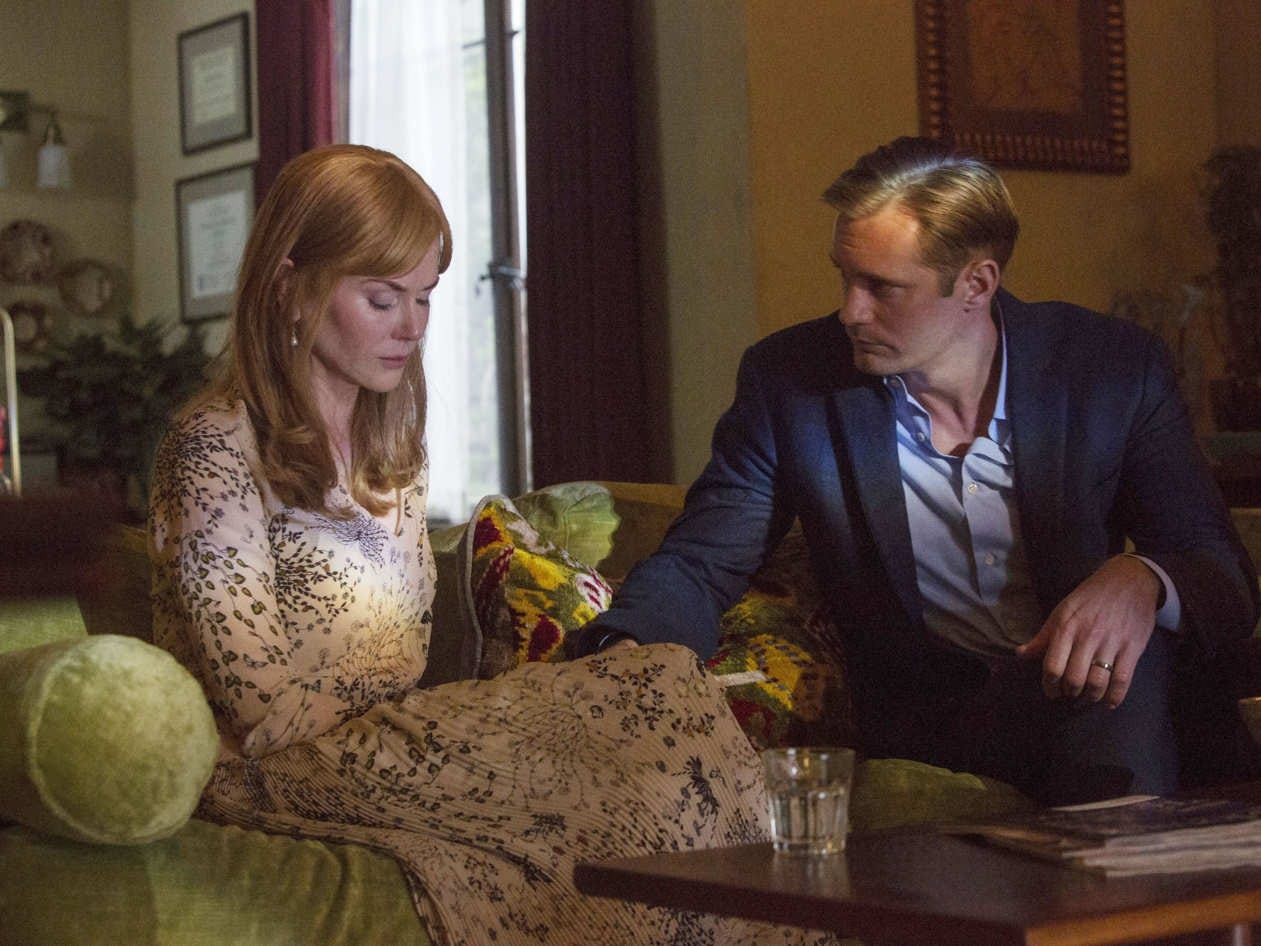 Mood boards for each character steered those interiors, too. Take Celeste, whose palette was all blues and grays. “She has an inherent sadness, and she was always supposed to have the best taste,” Wells said.

The original source material took place in author Liane Moriarty’s home country, Australia, so Wells and her team were tasked with helping translate the vibe to America’s uber-rich.

“The houses in Monterey feel more handcrafted, and make more use of the natural setting,” Wells explained. “There’s a beachiness, but not in a southern California, ‘Gidget’ sort of way. This is not an ocean you’re going to put your feet into.” 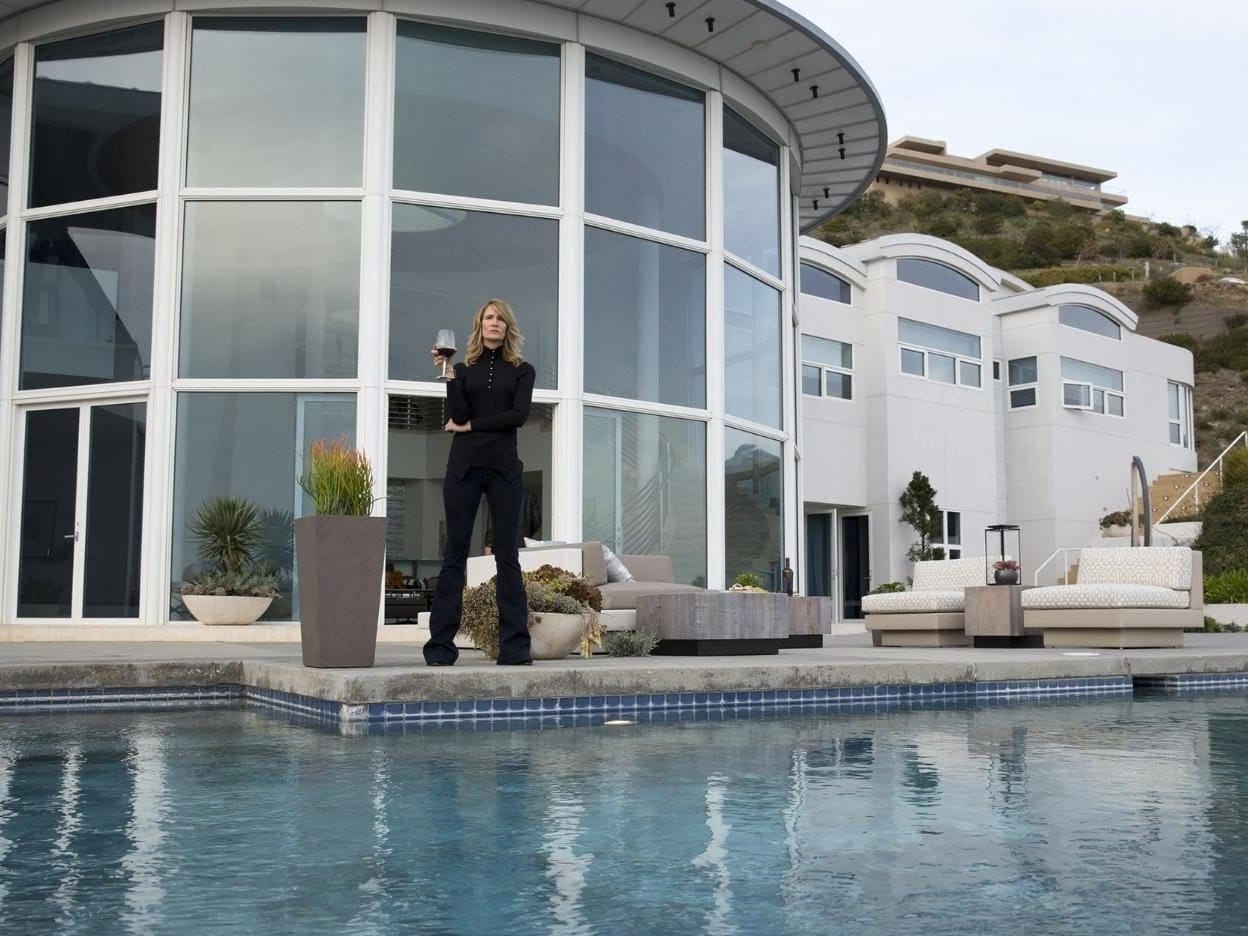 HBOLaura Dern’s Renata Klein on ‘Big Little Lies’ is a high-powered career woman — and her oceanfront home reflects her status.

Much like the paparazzi-style shooting on “Succession,”Wells explained that director Jean-Marc Vallée – who helmed season one – uses an unconventional style. He uses a handheld camera and weaves through the space, seemingly chancing upon the wealthy women he’s filming.

The natural look of their homes isn’t accidental either. “If there’s a lamp on set, that’s what is lighting the room. They used no movie lights,” Wells explained.

Per these set decorators and designers, three key elements contribute to how they conceived the New Rich Look.

In real life, none of these characters would have outfitted their spaces themselves.

“There’s a safety to these spaces, because they were created by a decorator for hire,” explained “Succession’s” Carter, “and those folks are always worried about pleasing someone and keeping their job. They don’t want to push it too far, or risk getting their heads chopped off.” Translation: The homes are filled with a surfeit of muted colours and classic lines. 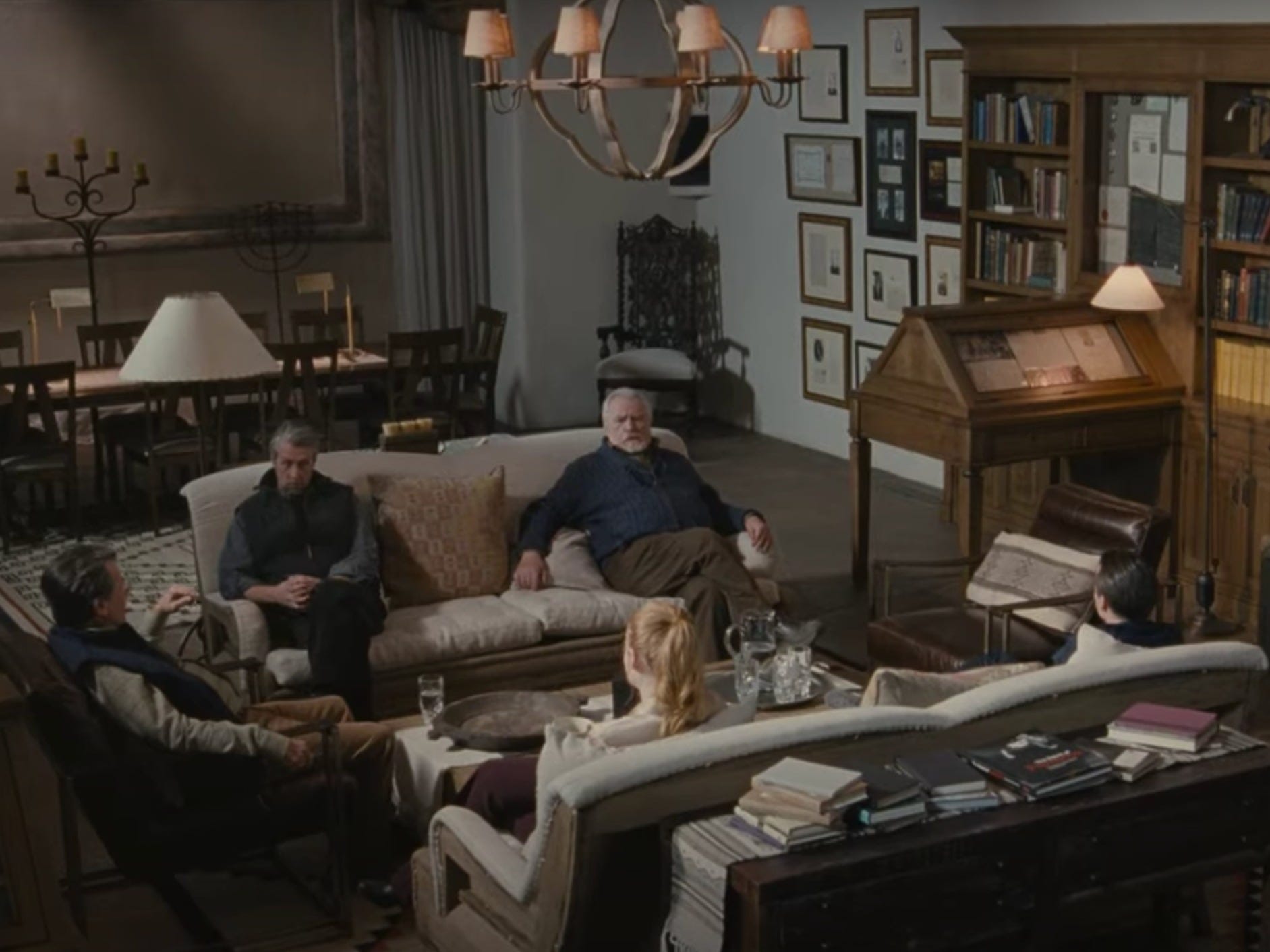 TV technology is a factor in that palette, too: Bright colours often glare or look garish in HD, per Wells. The high definition camera also makes it harder to substitute materials and means entire rooms must be fully realised.

“Look at ‘Leave It To Beaver’ and see how few things they have in their house,” she said. “Now, I pick every book that goes on the shelf, because you can literally spot anything in the background.”

Most of all, though, thank the real-life New Rich for the New Rich Look. See how Jennifer Aniston supervised the aesthetic, or the way that one percenters clamor to offer their actual homes as locations now. These shows are watched, and loved, by the very folks they depict.

“[Securing locations] got a lot easier in the second season, when it became like a trophy,” said “Billions” vet Michael Shaw. “All the Wall Streeters were watching it, and would say ‘I would love you to come to my house.'”