As Americans struggle to make ends meet during the coronavirus outbreak, the Senate says it won't consider another relief package until June 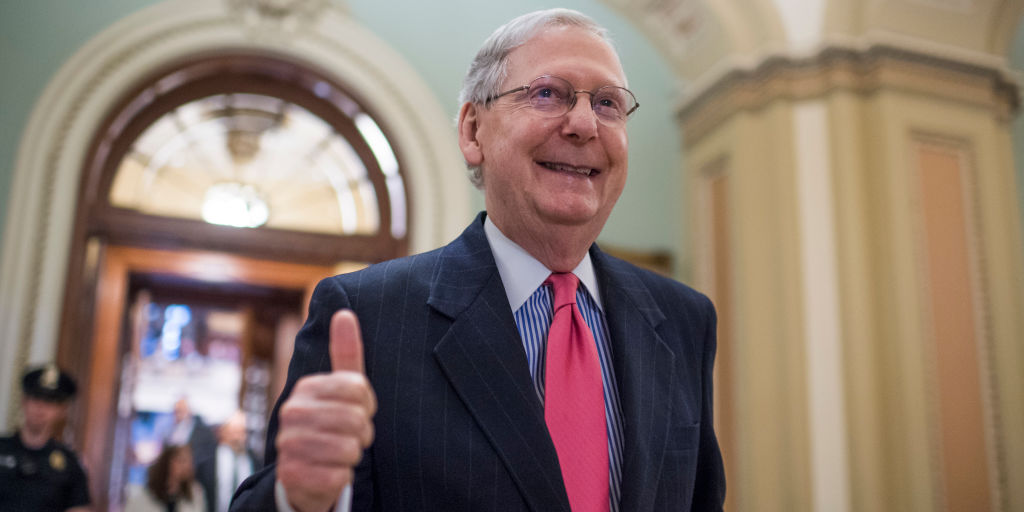 Senate leaders say they won’t consider voting on another coronavirus relief package until June, according to the Associated Press.

At the same time, House Democrats are pushing for a new $US3 trillion pandemic relief package that would provide another round of stimulus check to Americans.

“We have not yet felt the urgency of acting immediately,” he said, according to Politico. “That time could develop, but I don’t think it has yet.”

Some in the GOP have shown support for the House bill, however. Rep. Peter King of New York told The Hill he planned to vote in favour of the relief package, on which the House is expected to vote Friday.

“Look, I disagree with a lot of things that are in that bill – some of the provisions involving illegal immigrants, some of the absentee ballots, the mail, all that stuff,” King, who is set to retire at the end of his term, told The Hill. “But the fact is, to me McConnell sort of laid it down, he’s talking about no federal aid to state and local government. New York is going to die, my county, Nassau County, Suffolk County is also in my district, not only are they running up tremendous cost – their revenue losses are unbelievable.”

The bill allocates close to $US1 trillion to state, local, territorial, and tribal governments. State and local governments, unlike the federal government, cannot run a deficit, meaning they may need to resort to layoffs or furloughs of public workers to balance budgets.

According to CNN, under this relief package, families could get up to $US6,000 in direct aid. This new package would give $US1,200 to individuals making under $US75,000 and give an additional $US1,200 for dependents.

More than 33 million Americans filed for unemployment benefits over the past two months. The monthly employment report from the Bureau of Labour Statistics estimated that 20.5 million jobs were lost in April.

The financial impact of the coronavirus has left many Americans struggling to figure out how to stay afloat. One couple told Business Insider they’re living in their car after losing their jobs as security guards.

Federal Reserve Chair Jerome Powell has warned that the US could go into a prolonged recession if there is no intervention, the AP reported.

President Donald Trump and Republicans have “have flatly rejected the coronavirus relief bill” that the House is expected to vote on at the end of the week, the AP reported.

“DOA,” Trump said during an event at the White House, according to the AP. “Dead on arrival.”

In a tweet, the White House press secretary, Kayleigh McEnany, wrote that Trump “has been clear that any future coronavirus aid package must prioritise Americans’ health and the nation’s economic prosperity.”

President @realDonaldTrump has been clear that any future coronavirus aid package must prioritize Americans’ health and the nation’s economic prosperity.

House Democrats are once again using this crisis to play politics and push their partisan agenda.

McEnany also accused House Democrats of using the pandemic as a chance to “play politics and push their partisan agenda.”

The package proposed would also extend the $US600 weekly unemployment benefits through January instead of July, establish a $US200 billion fund to provide hazard pay to essential workers, as well as provide another $US75 billion for testing, contact tracing, and isolation measures.

“We have to address in a big way,” House Speaker Nancy Pelosi told the AP. “The American people are worth it.”