The coronavirus is starting to spread on a US Navy warship, and the flattop's crew is scrambling to stop it 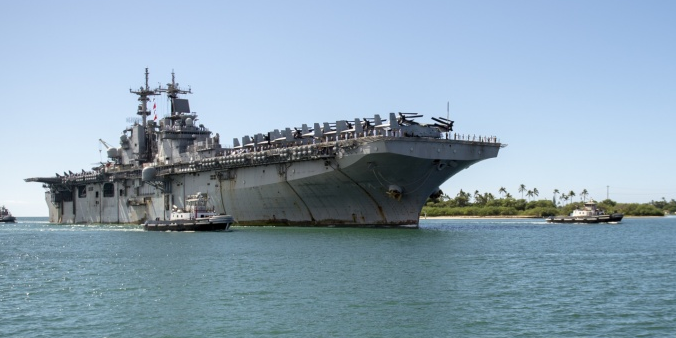 The coronavirus is starting to spread aboard the flattop amphibious assault ship USS Boxer.

The Navy revealed Wednesday that a second sailor assigned to the warship has tested positive for the virus. Both of the infected sailors are currently in isolation.

“There is no indication that the Sailors were in close contact aboard the ship,” the Navy said, adding that “the Sailors work in two different departments.”

The Navy has reported multiple cases aboard several different ships, the first of which was the Boxer currently at port in San Diego, California. The latest marks the first time two sailors assigned to the same ship have tested positive.

As the situation worsens, the ship’s crew is implementing an “aggressive mitigation strategy” to protect others on board.

Medical personnel are screening everyone coming aboard the Boxer, ship personnel are using bleach to conduct a deep cleaning two times a day, and the crew is practicing social distancing.

The Boxer has reportedly had some problems with social distancing. The morning after the first sailor tested presumptive positive for the coronavirus, military leaders gathered dozens of crew members into a small space for a 30-minute meeting on social distancing, ProPublica reported Monday.

As sailors fall ill, the amphibious assault ship has closed the gyms, assigned personnel living aboard the vessel beds that are six feet apart, and made sure antiseptic wipes and hand sanitizer are available throughout the ship.

“Shipmates, the spread of the coronavirus is something that we are taking very seriously,” Chief of Naval Operations Adm. Mike Gilday and Master Chief Petty Officer of the Navy Russell Smith said in a recent joint statement.

“While many of you may be anxious, worried, or wondering what happens next,” they continued, “leadership at every level is actively engaged on this issue.”

The highly-contagious coronavirus that first appeared in China is a pandemic that has spread around the world. The US has reported more than 8,000 cases and 129 deaths. The Department of Defence says that at least 49 military personnel have been infected.