The Seattle Storm are supporting Joe Biden for president, becoming the first pro sports franchise to endorse a political candidate 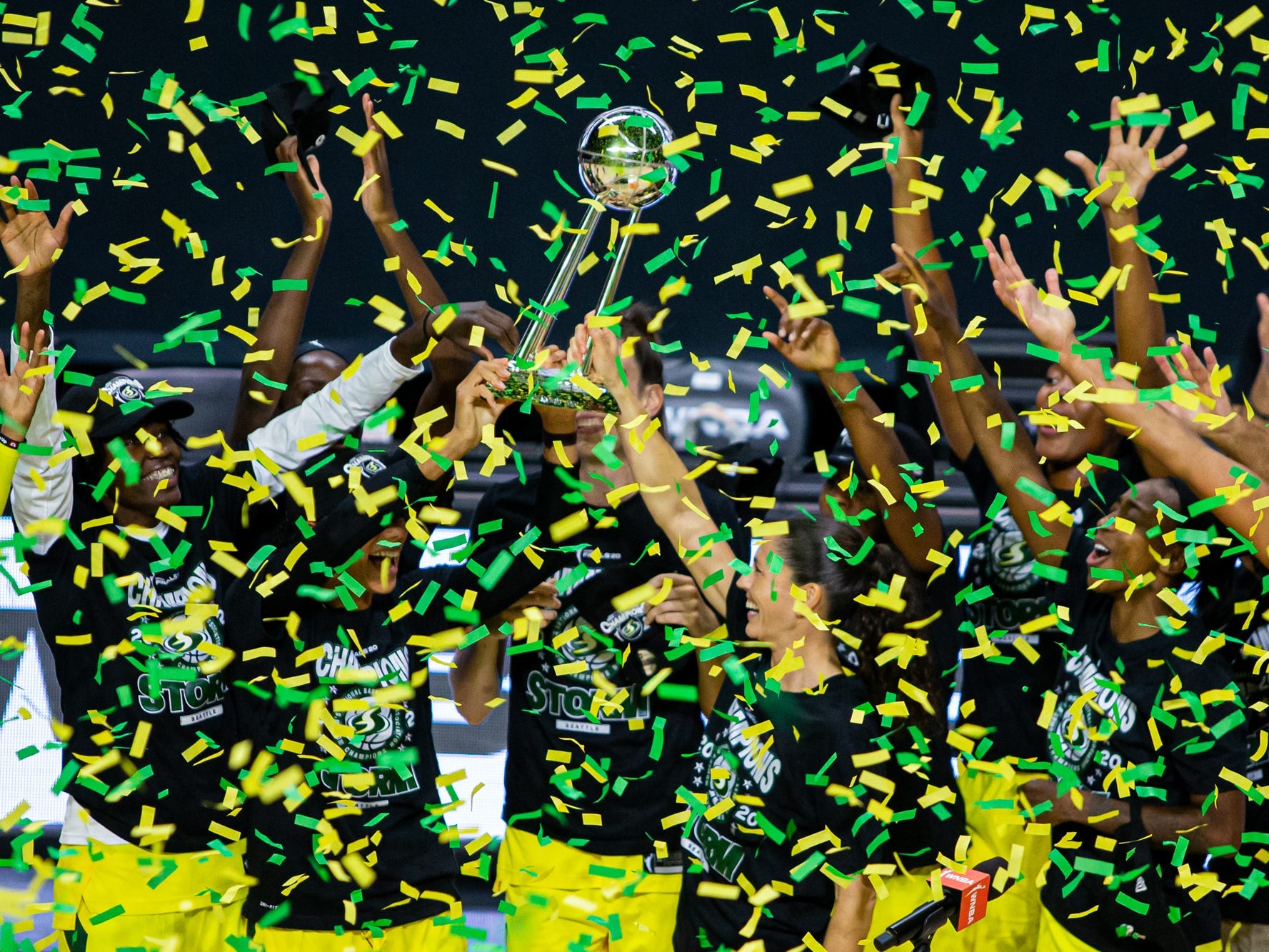 Mary Holt-USA TODAY SportsThe 2020 WNBA champions encouraged fans to vote for Joe Biden in the presidential election, bucking the call to ‘keep politics out of sports.’

The WNBA has never been afraid to get political, but the Seattle Storm used their platform in unprecedented fashion this week.

On Wednesday â€” with just 13 days remaining before the US presidential election on November 3 â€” the 2020 WNBA champions officially endorsed Joe Biden and Kamala Harris as a franchise.

“Join us in support of Joe Biden and Kamala Harris,” the team posted on its official Twitter account Wednesday afternoon.

Professional sports teams rarely â€” if ever â€” explicitly support political candidates in elections. And given the familiar call to “keep politics out of sports,” it’s no wonder the Storm’s move to endorse the Democratic ticket is so uncommon across American athletics at the institutional level. 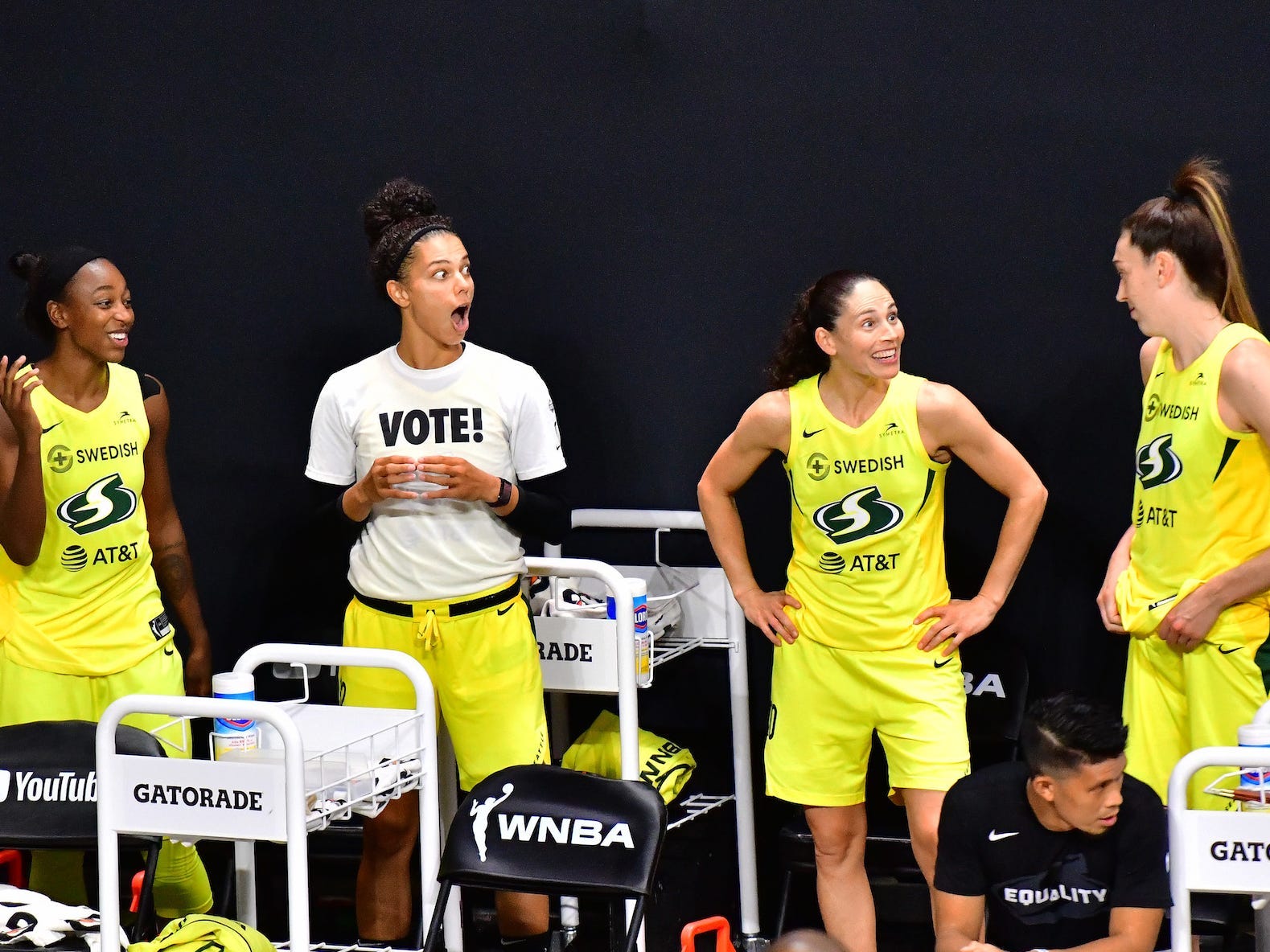 Julio Aguilar/Getty ImagesAlysha Clark wears a ‘VOTE!’ shirt while chatting with her Seattle Storm teammates during Game 3 of the 2020 WNBA Finals.

The Seattle franchise owners â€” who comprise one of the only majority-woman ownership groups in major U.S. professional sports â€” took to Twitter to explain their decision to issue an official endorsement on behalf of the team.

Social enterprise entrepreneur and two-time Olympian Ginny Gilder said she was “proud” to endorse Biden and Harris alongside her co-owners and added that “we don’t typically endorse candidates, but these are NOT typical times.”

I'm honored to join my @SeattleStorm co-owners, @lisabrummel & @dawntru to endorse the @JoeBiden & @KamalaHarris ticket for President. We don't typically endorse candidates, but these are NOT typical times. #Force4Change https://t.co/waOa80FY7r

Fellow owner Dawn Trudeau wrote that “there is no doubt who we support in this election” and implored fans to vote “For ourselves. For our family and friends. For our business. For our country. For our future.”

There is no doubt who we support in this election. For ourselves. For our family and friends. For our business. For our country. For our future. Vote for Biden/Harris. #force4change @seattlestorm pic.twitter.com/QaZyWushHu

The WNBA players â€” including those suiting up for the Storm â€” have been vocal about voting and other social justice issues throughout the 2020 season and beyond. They devoted their season to demanding justice for Breonna Taylor and other female victims of police brutality, wearing Breonna Taylor’s name on the back of their jerseys throughout their 2020 campaign. They spoke with former Georgia gubernatorial candidate Stacey Abrams and Taylor’s mother, Tamika Palmer. They demanded justice for the late Louisville EMT, honoured Sandra Bland, and raised awareness for other Black women like them through a partnership with the “Say Her Name” campaign.

WNBA stars across the league also joined forces to openly endorse Reverend Raphael Warnock â€” who is opposing incumbent Kelly Loeffler in her Georgia Senate race â€” despite her ownership stake in one of the league’s teams. Players wore T-shirts enscribed with “VOTE WARNOCK” after many demanded Loeffler be banned from the WNBA after her comments against the Black Lives Matter movement. 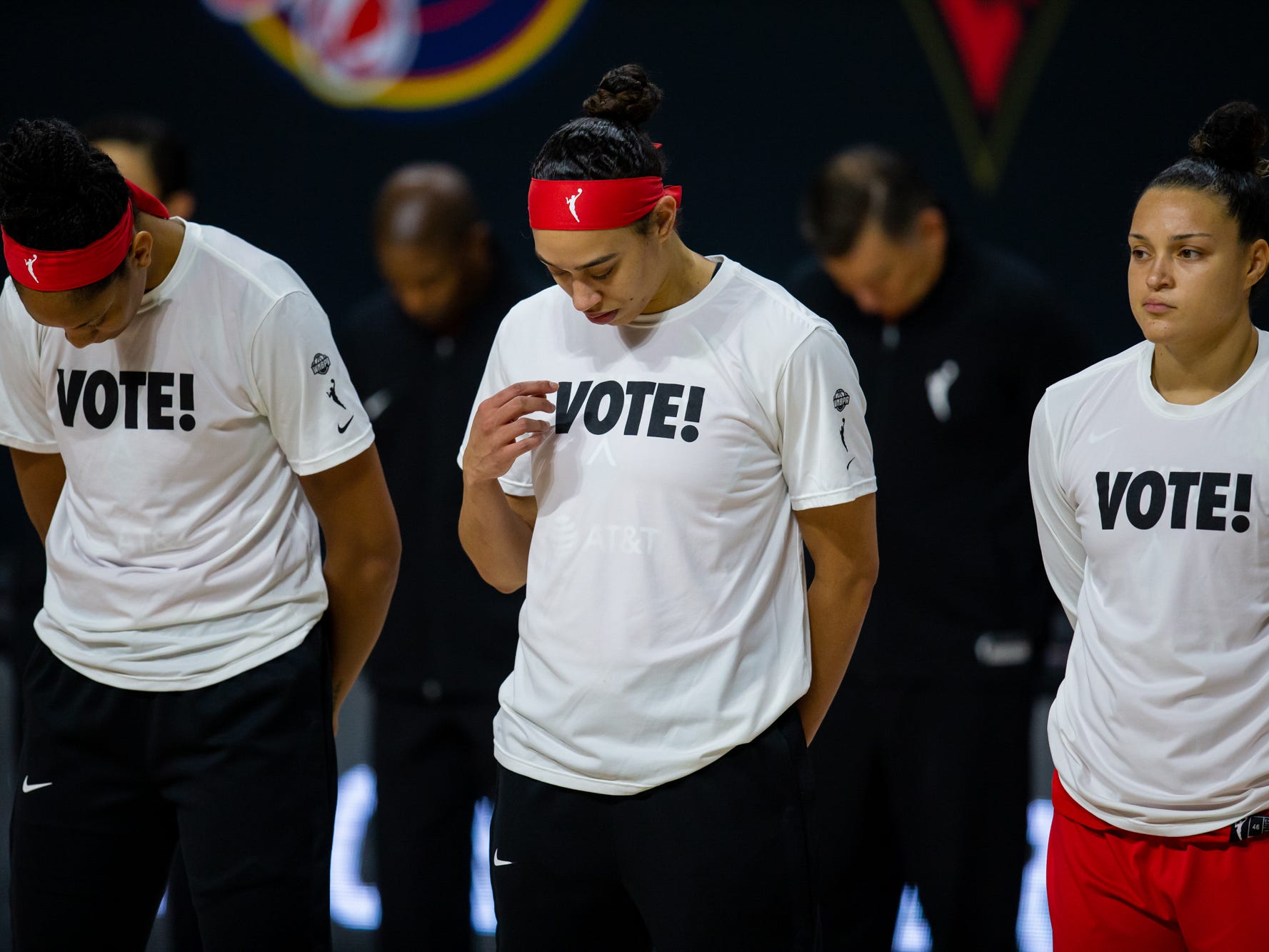 Mary Holt-USA TODAY SportsWNBA players on the Las Vegas Aces encourage fans to vote prior to a game.

And after Seattle completed its three-game sweep of the Las Vegas Aces in the 2020 WNBA Finals, Storm star Alysha Clark perfectly encapsulated the season during her postgame media availability.

“Even just speaking to raise awareness of the importance of voting and what comes after this is going to be a continuous fight,” Clark said. “And we are ready for it. We are built for it.”

“That’s what the women of this league are made of,” she added. “We are built to fight. We are built to stand up for what is right in this world, and we are going to continue to do that.”