Archaeologists unearthed 160 sarcophagi in an Egyptian city of the dead. They opened one that was sealed for more than 2,500 years. 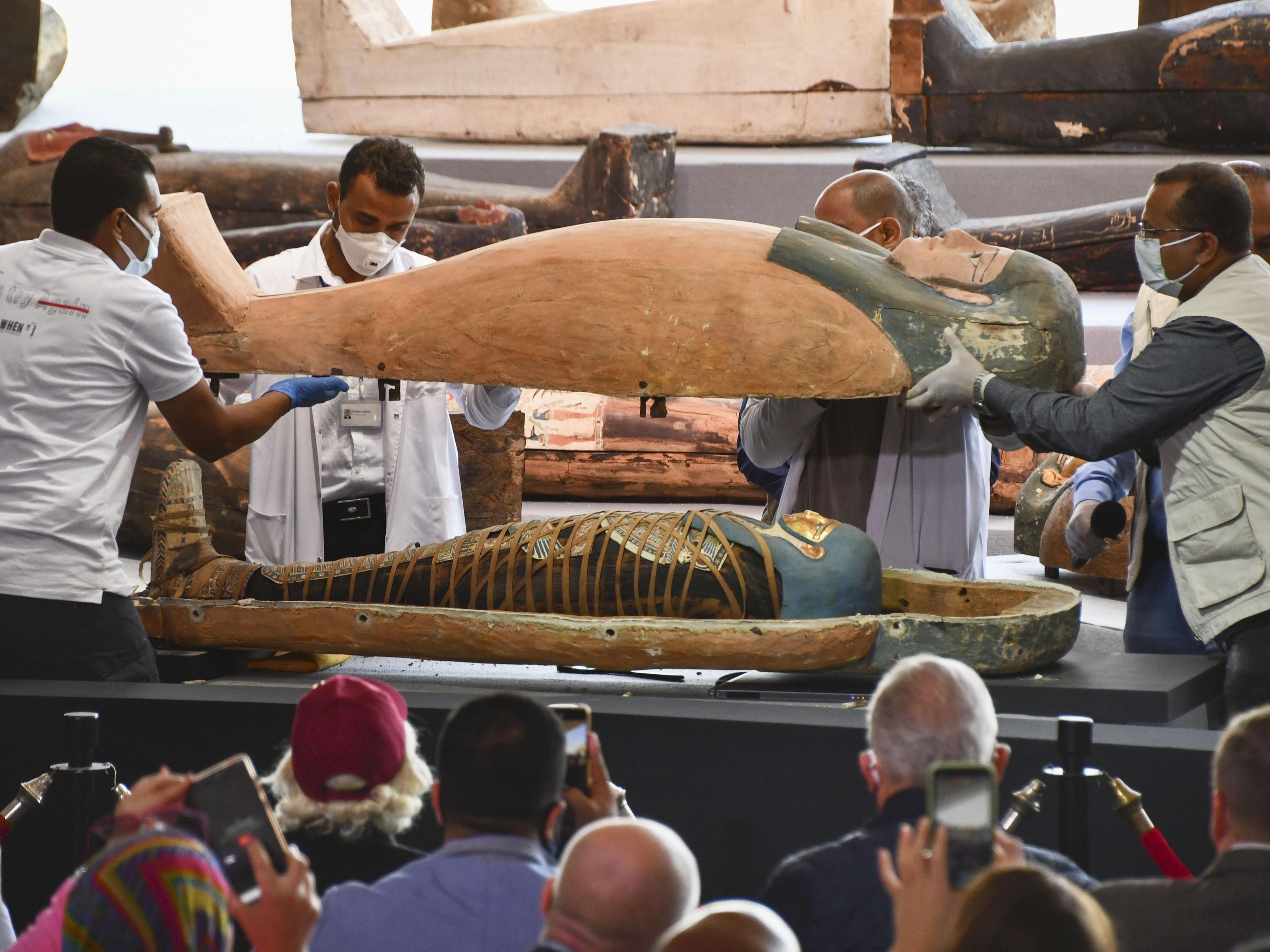 Kyodo News via GettyArchaeologists examine a mummy inside a newly discovered coffin on November 14, 2020 in Saqqara, Egypt.

More than two millennia ago, 160 Egyptians were laid to rest in Saqqara, an ancient city of the dead. Their organs were removed, and their bodies wrapped in linens. Priests placed them inside wooden boxes adorned with hieroglyphics.

The mummies stayed buried in those sarcophagi for 2,500 years â€” until their recent discovery by Egyptian archaeologists. In the last two months, researchers have discovered a trove of coffins buried deep within shafts below the Saqqara sand.

Over the weekend, Mostafa Waziri, the general director of Egypt’s Supreme Council of Antiquities, unveiled at least 100 new sarcophagi. That added to the total of 59 Saqqara coffins that had been found in September and October.

These sarcophagi were “completely closed and haven’t been opened since they were buried,” according to Egypt’s Ministry of Tourism and Antiquities.

The archaeologists picked one sarcophagus to open live in front of an audience at a small event on Saturday. Then they conducted an immediate, real-time X-ray of the mummy inside, which revealed a short, ancient Egyptian man who’d been in good health before he died between ages 40 and 45.

The photos below show how archaeologists found the sarcophagi and other mummies buried beneath Saqqara.

The 100 Saqqara coffins that archaeologists most recently found were buried in three 40-foot-deep burial shafts. Fadel Dawood/picture alliance via GettyAncient sarcophagi are displayed during a press conference at Saqqara, Egypt, November 14, 2020.

The sarcophagi were decorated with colourful, intricate hieroglyphics. 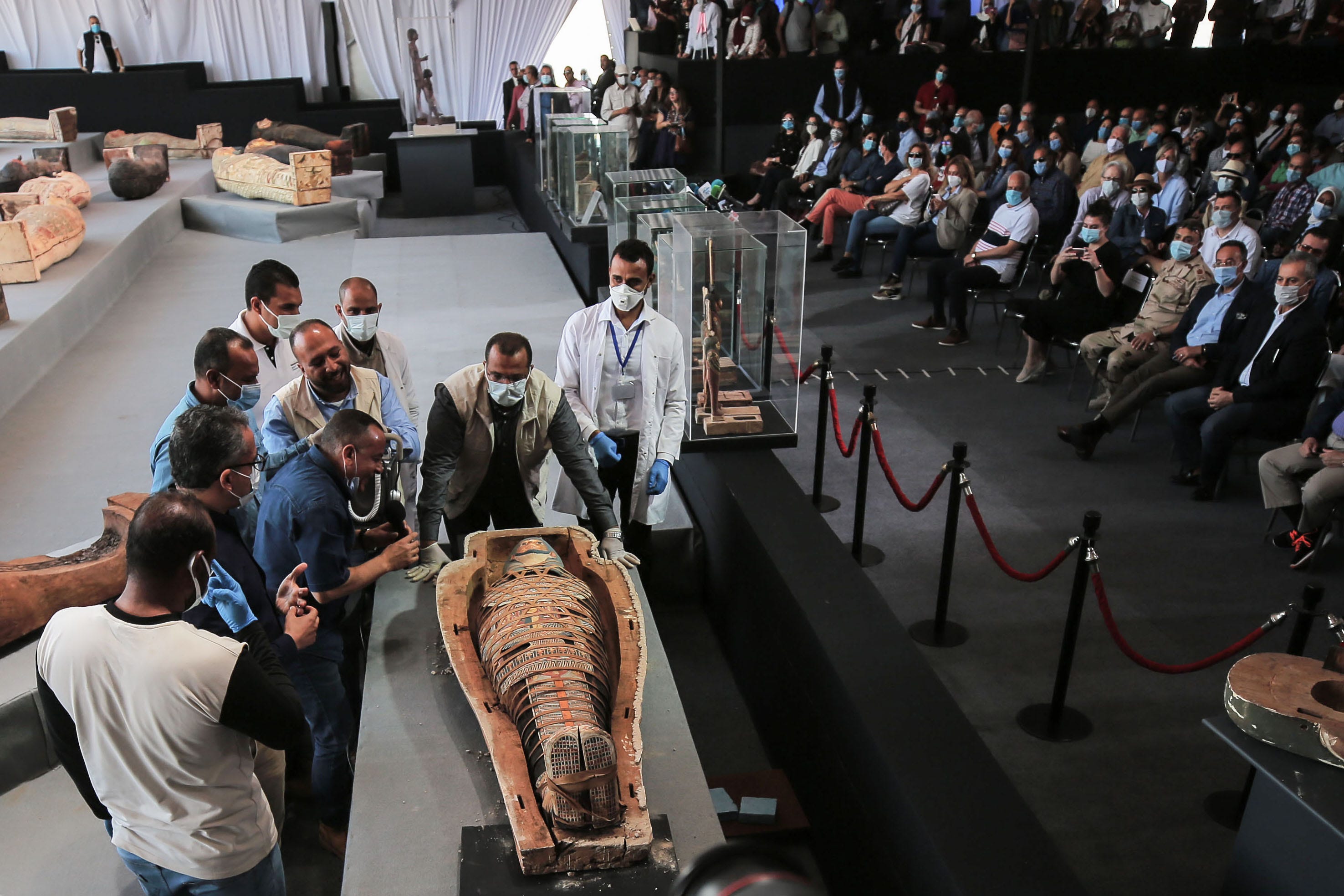 Fadel Dawood/picture alliance via GettyKhaled El-Enany, Egyptian minister of tourism and antiquities, and Mostafa Waziri, the secretary-general of the Supreme Council of Antiquities, inspect a mummy during a press conference at Saqqara, November 14, 2020.

Many of the Saqqara coffins were “well-gilded, well-painted, well-decorated,” he said.

The X-ray showed the mummy was a male with perfect teeth who was between 5-foot-4 and 5-foot-7. 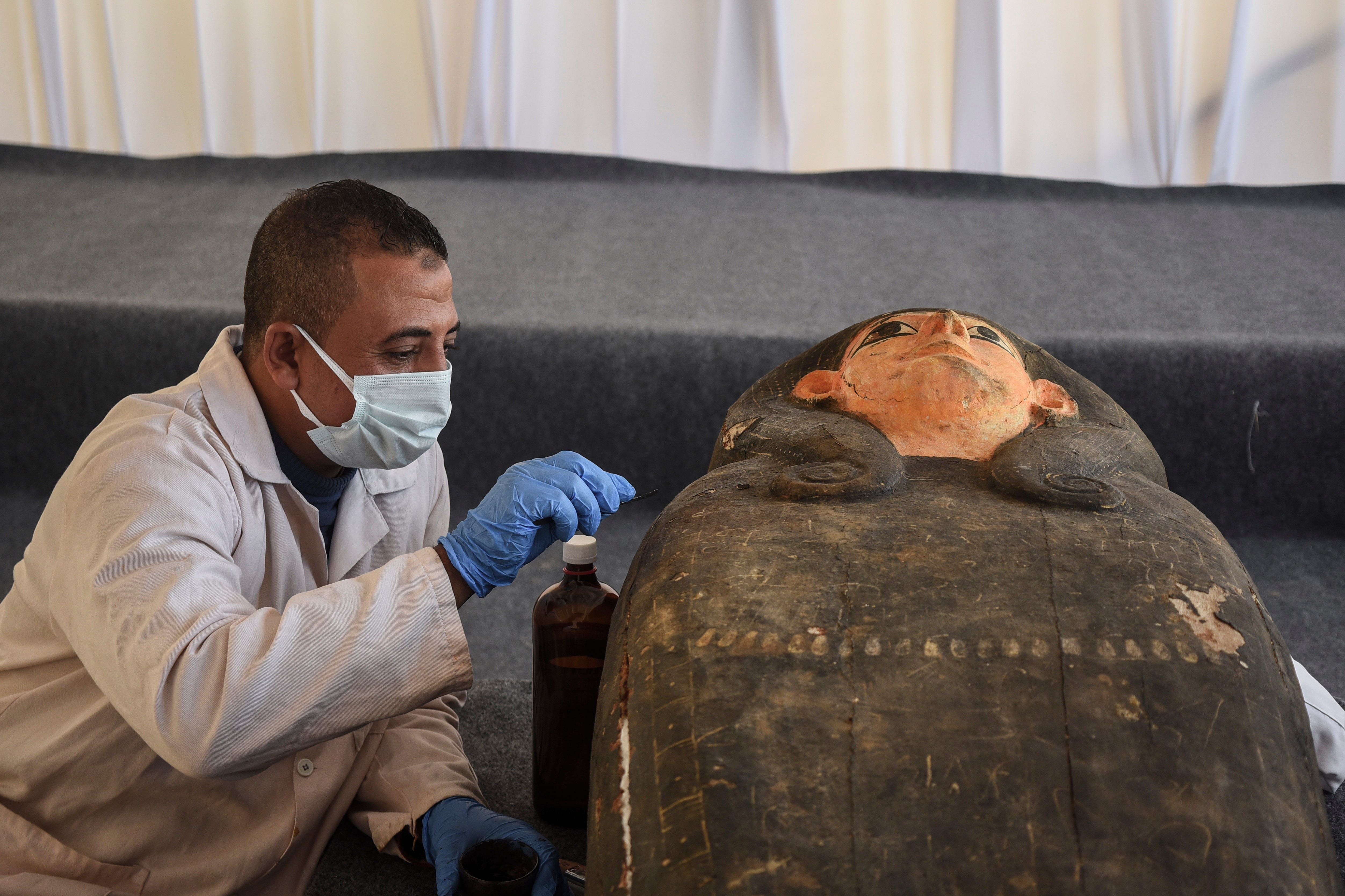 He was buried with his arms crossed over his chest – a position,Waziri said, that symbolises royalty.

Saturday wasn’t the first time that archaeologists publicly opened a coffin: Egyptian officials also opened one on stage in an October press conference. 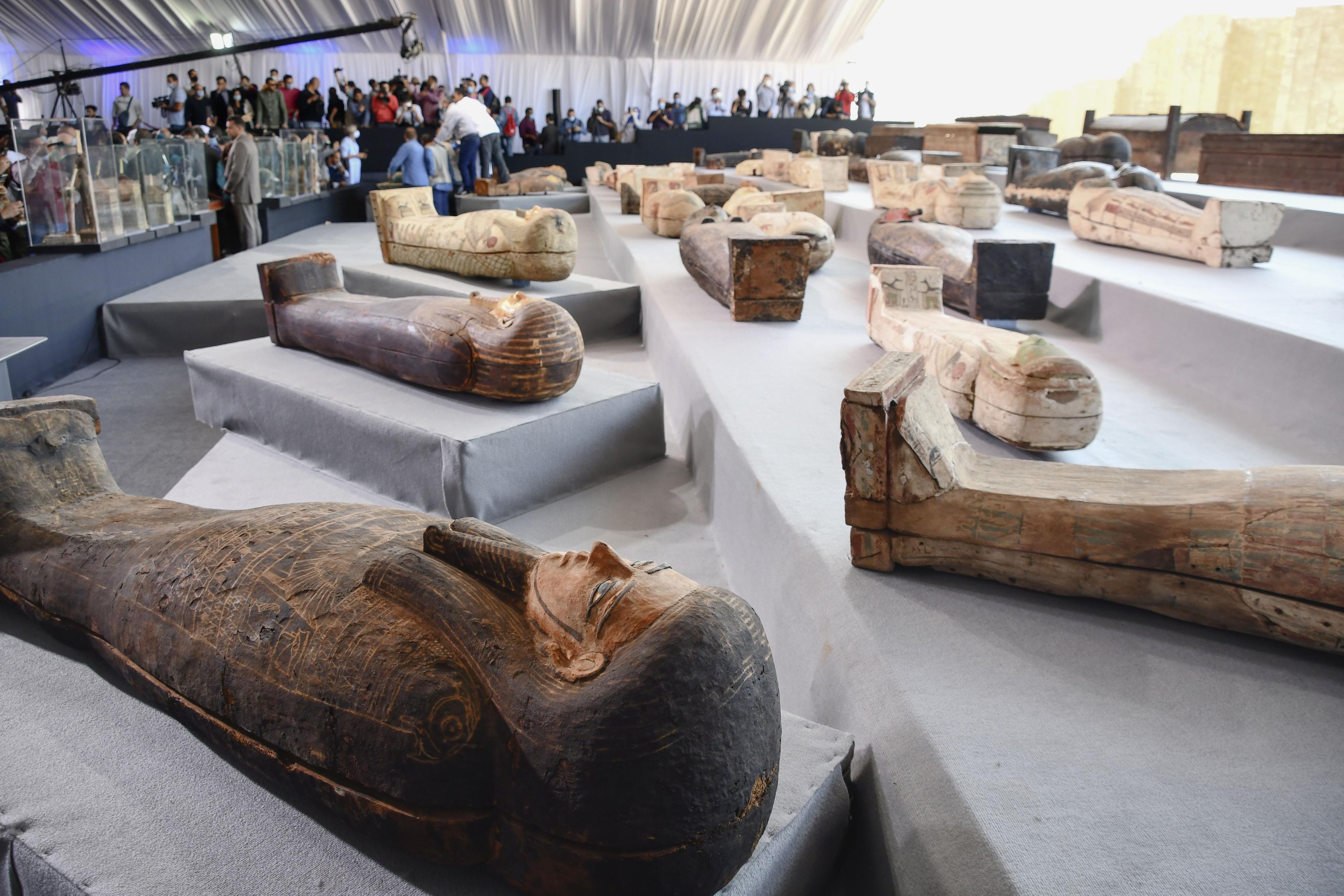 Kyodo News via GettyNewly discovered ancient coffins on display during a November 14, 2020 press conference in Saqqara.

Saturday’s event was, however, was the first time researchers had X-rayed the mummy inside.

Archaeologists also unearthed more than 40 artifacts in the three shafts, according to Khaled El-Enany, Egypt’s minister of tourism and antiquities. 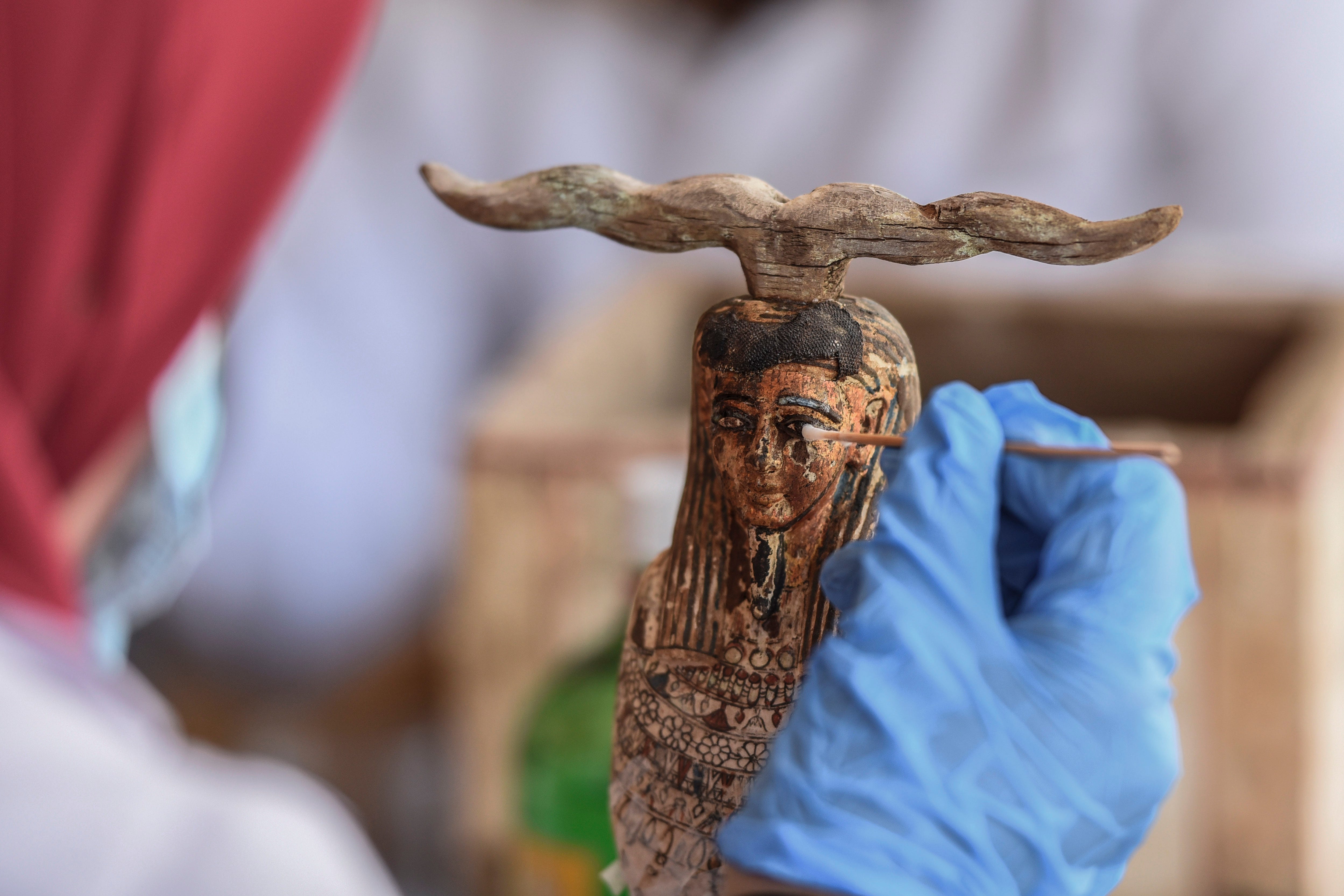 These included gilded statues and funerary masks. El-Enany said the artifacts and coffins will be distributed to three museums in Cairo for display.

But the new artifacts are merely the most recent in a string of discoveries at Saqqara. 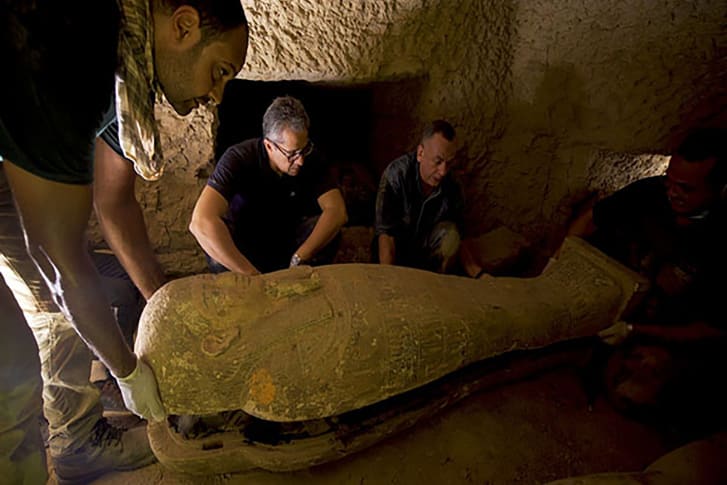 Ministry of Tourism and Antiquities EgyptKhaled El-Enany and Mostafa Waziri peer at a sarcophagus in Saqqara.

El-Enany announced in September that a set of 13 sarcophagi had been found at the bottom of a 36-foot-deep shaft.

He said on Twitter that finding that first coffin cache was “an indescribable feeling.”

The shaft had three offshoots branching away from it, so El-Enany predicted at the time that more undiscovered sarcophagi were likely still buried in the shaft. He was right.

Two weeks later, the ministry announced that archaeologists had found 14 more sarcophagi. That brought the total to 27. 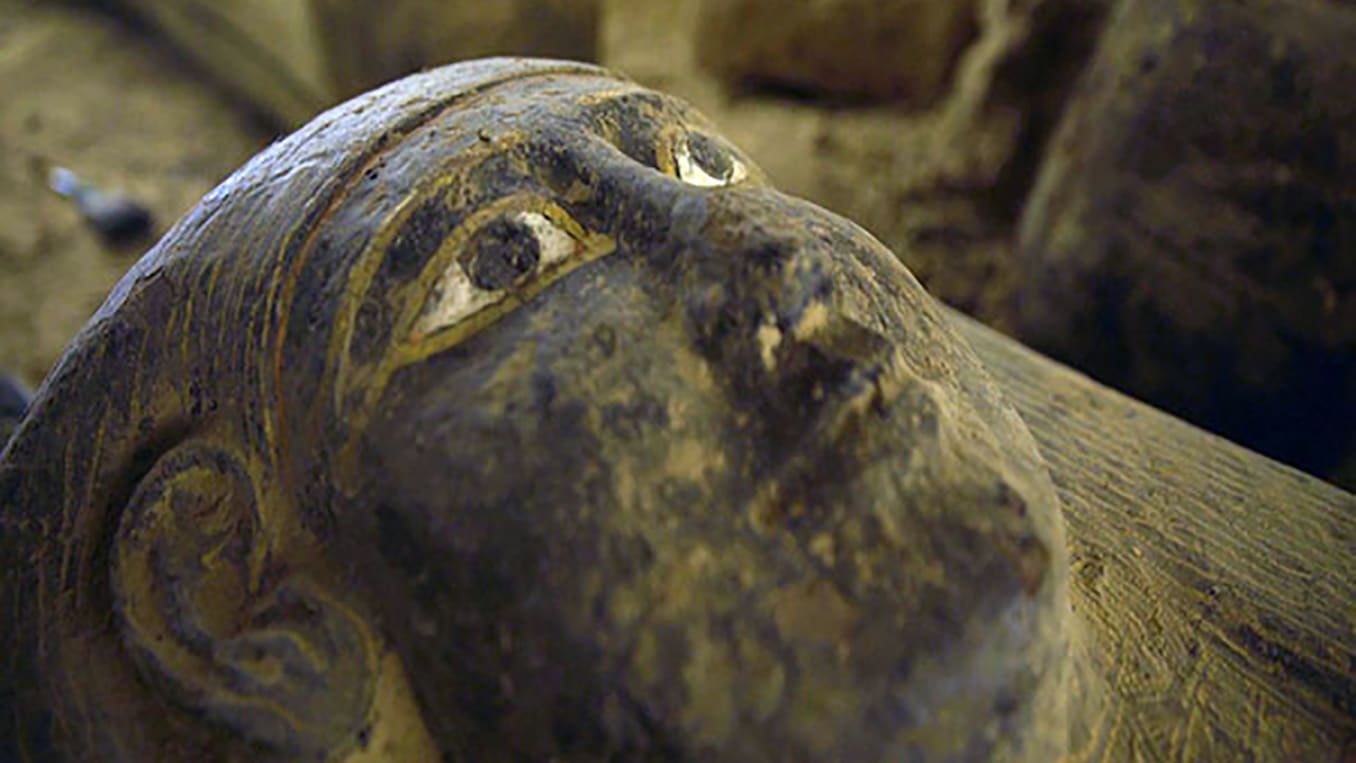 In a statement on Facebook, Egypt’s Ministry of Tourism and Antiquities said the finding is “the largest number of coffins with one burial” discovered since a group of 30 coffins were unearthed at Al-Assasif cemetery in Luxor last year.

Archaeologists kept finding more sarcophagi in the weeks that followed. On October 3, Egypt’s Ministry of Tourism and Antiquities announced the discovery of another 32 coffins.

That brought the total to 59.

Despite being buried for 2,500 years, most of the Saqqara sarcophagi have retained a lot of their original paint and hieroglyphics.

With the exception of the two opened by Egyptians officials, the coffins have been sealed since their burial.

The identities of the people inside the sarcophagi “have not been determined,” the ministry said in September. But Waziri said the newly X-rayed mummy was likely someone wealthy.

The coffins were found stacked on top of each other in various burial shafts.

Archaeologists have uncovered various artifacts in each burial shaft they excavated.

In September, they uncovered a wooden obelisk just over a foot tall that’s adorned with paintings of Egyptian gods and goddesses, CNN reported.

The ancient Egyptians buried their dead in Saqqara — which is 20 miles south of Cairo in the Western Desert — for some 3,000 years. 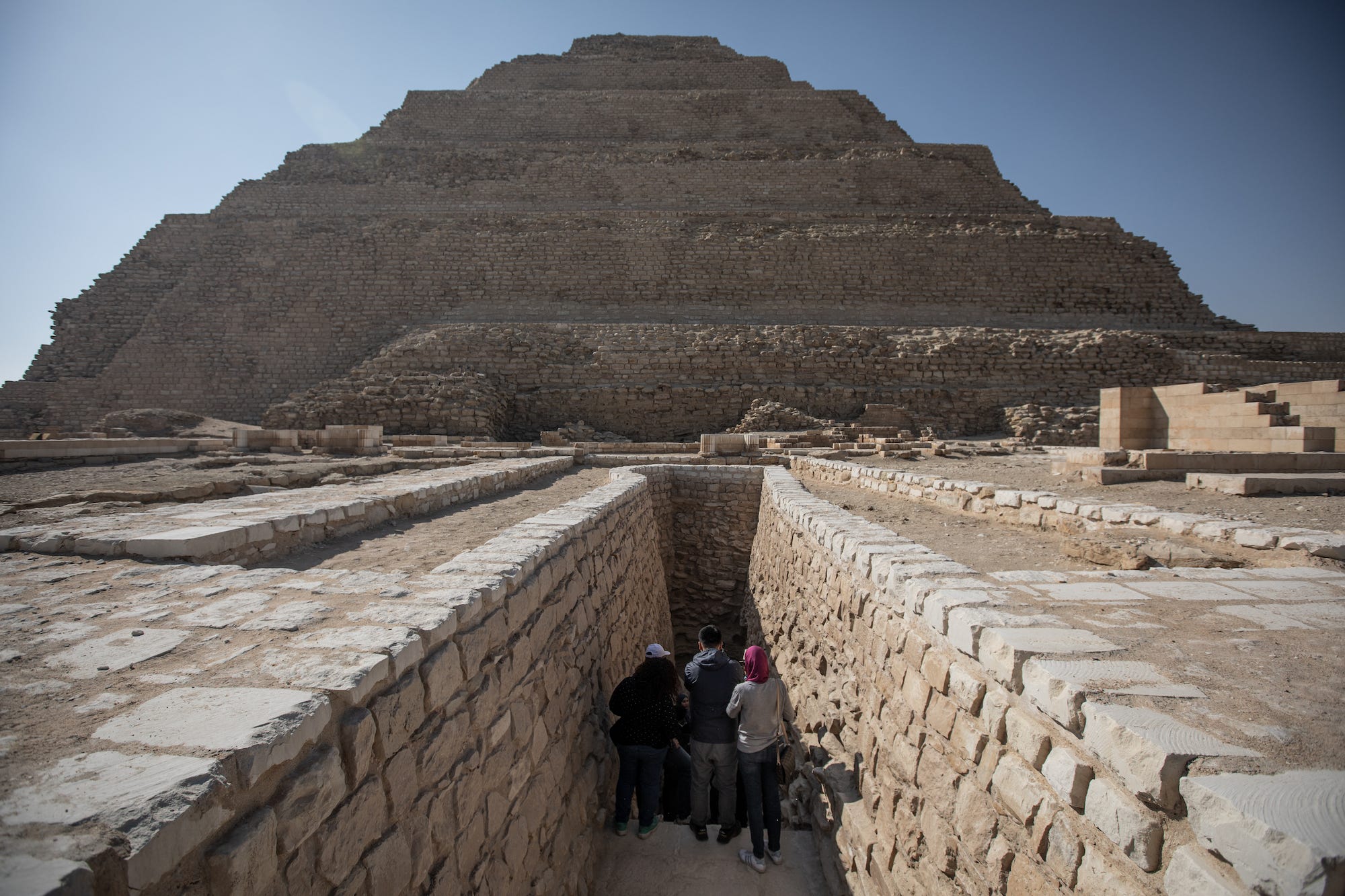 Oliver Weiken/Picture Alliance / GettyPeople enter the Pyramid of Djoser in Saqqara outside Cairo.

Saqqara was the necropolis, or city of the dead, for the ancient capital of Memphis. Its name likely derives from Sokar, the Memphite god of the dead.

Saqqara is home to one of Egypt’s oldest pyramids: the Step Pyramid of Djoser, which was built about 4,600 years ago. 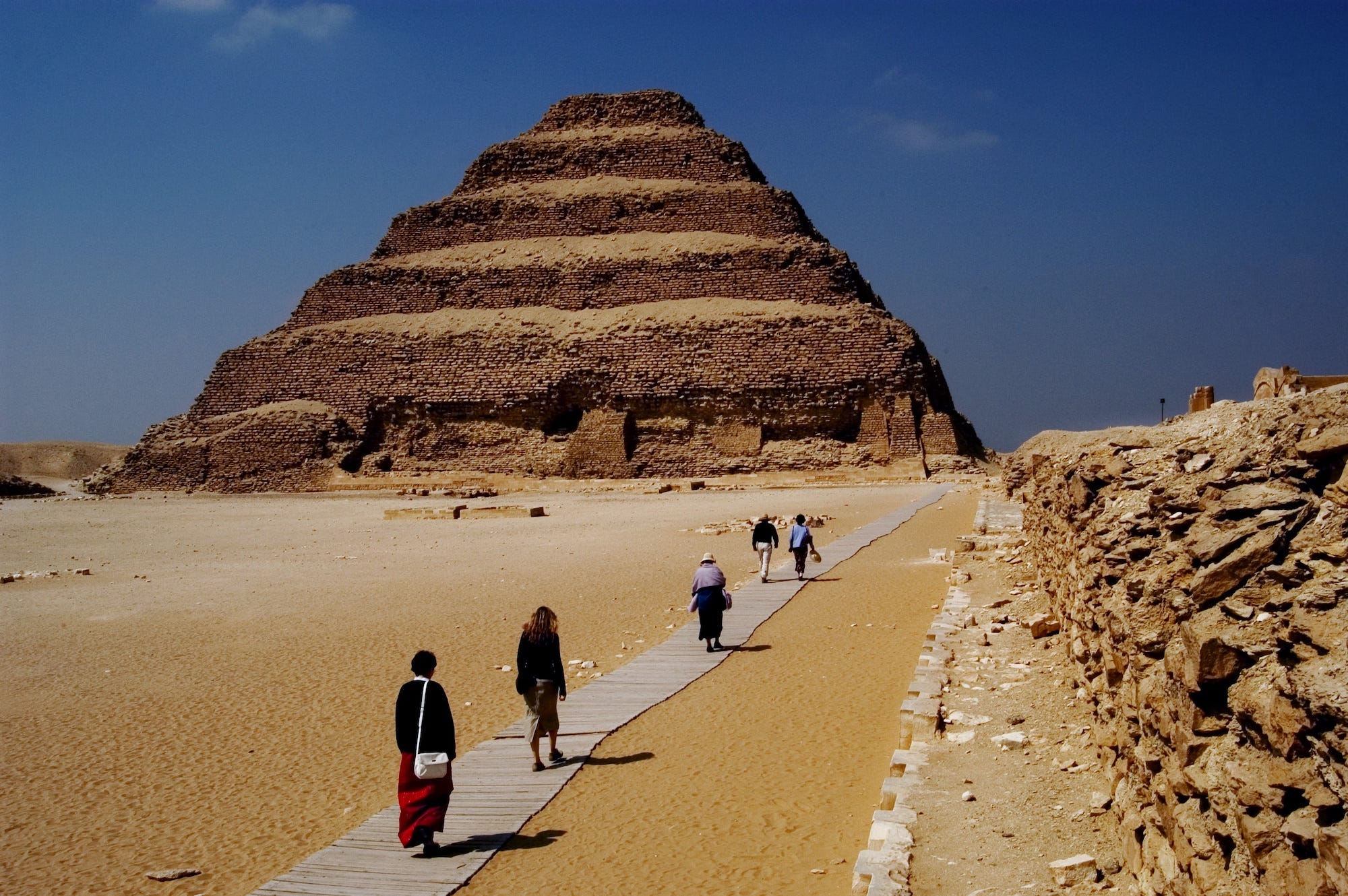 The architect Imhotep built the pyramid to house the remains of King Djoser, an ancient Egyptian pharaoh from the Third Dynasty.

It was the first building ever made of stone, and it paved the way for other pyramids, including the Great Pyramid of Giza.

The necropolis is replete with mummies. 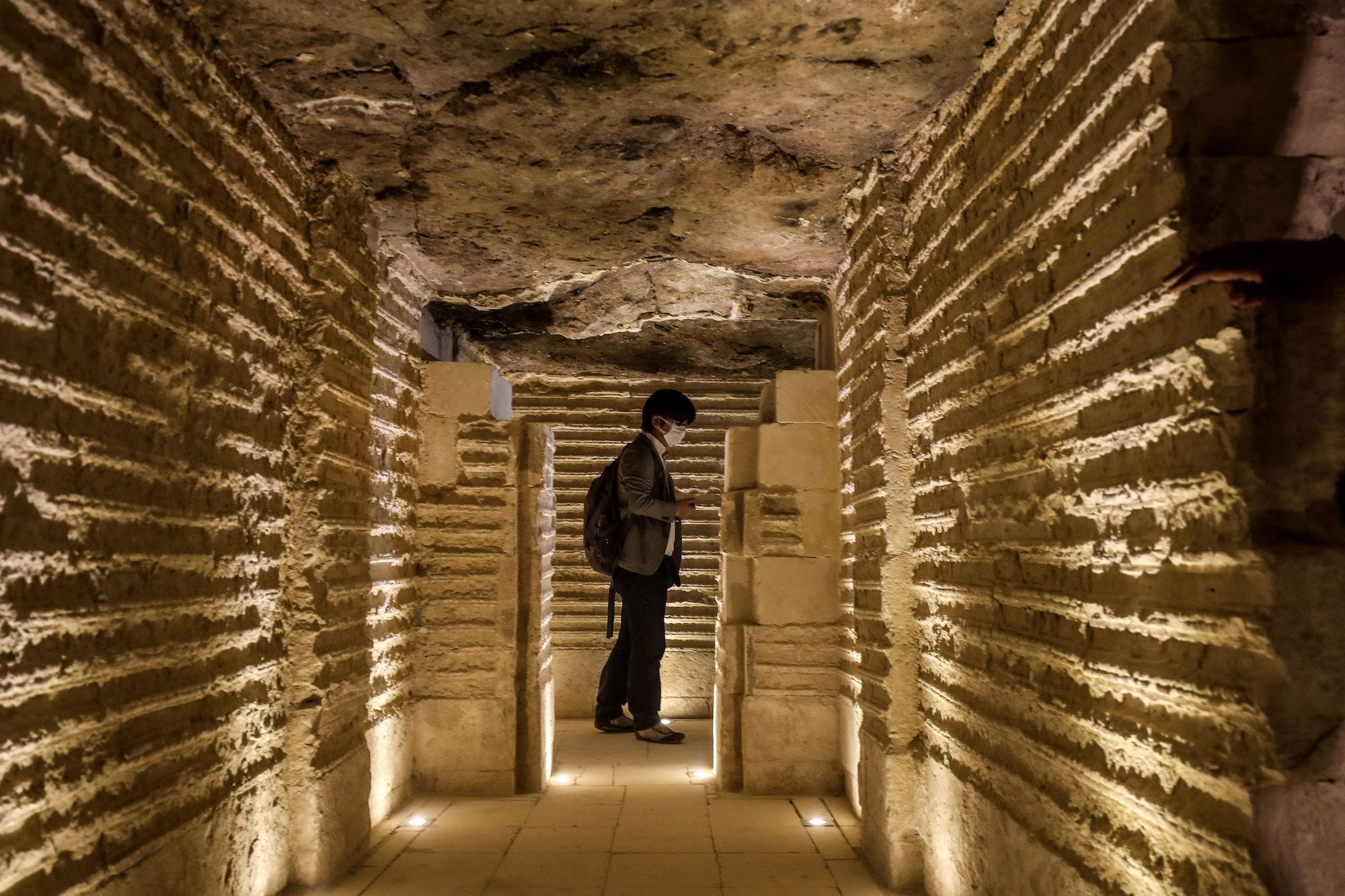 Mohamed el-Shahed / AFP / GettyA journalist tours inside the step pyramid of Djoser in Egypt’s Saqqara necropolis, south of the capital Cairo, on March 5, 2020.

Egypt’s Ministry of Tourism and Antiquities announced in 2018 that archaeologists had discovered a 4,400-year-old tomb in Saqqara. It belonged to a royal purification priest who served during the reign of King Nefer-Ir-Ka-Re.

Researchers also unearthed a huge cache of animal mummies there in November 2019. 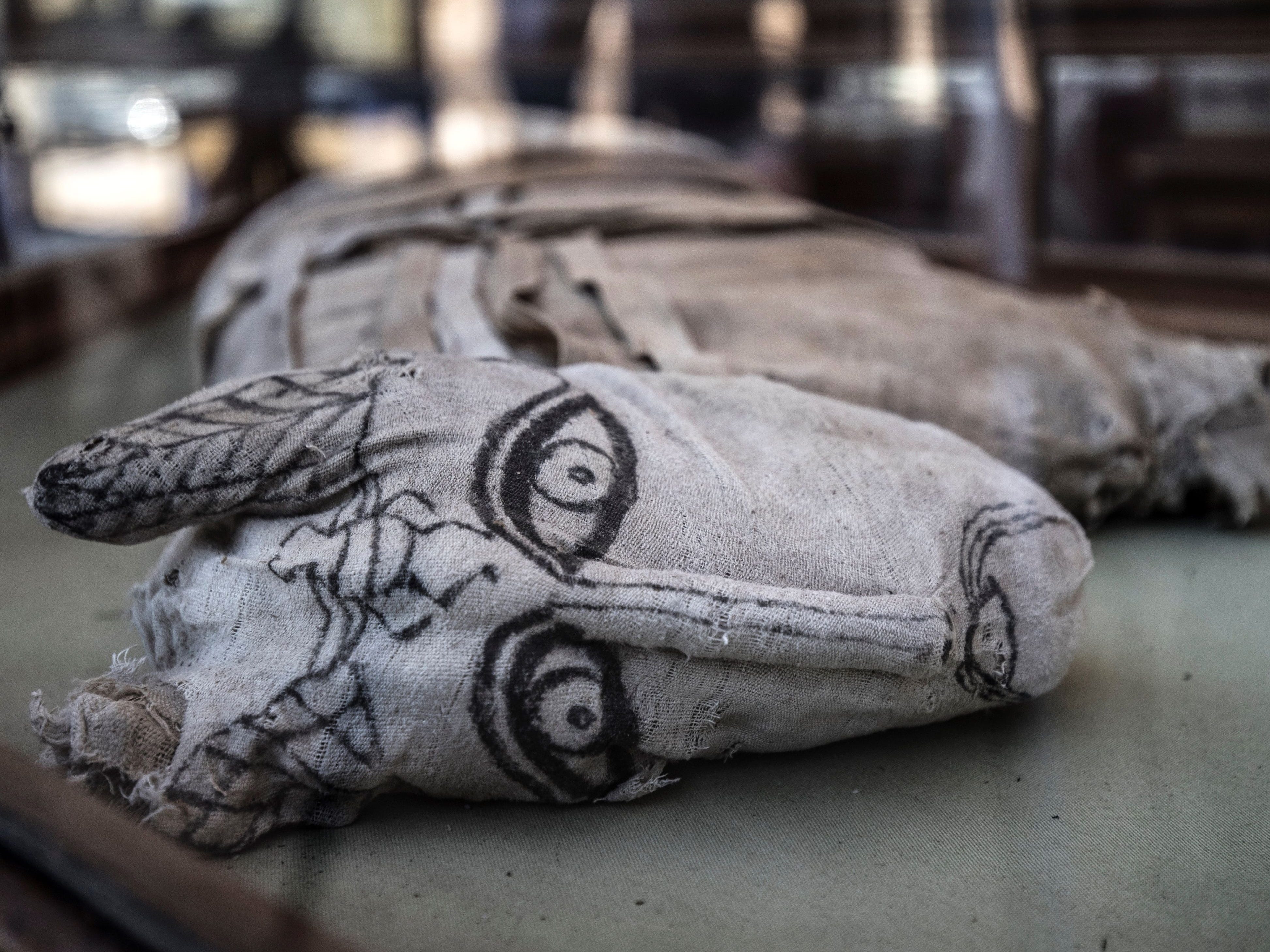 Khaled Desouki/AFP via GettyA feline mummy displayed after the announcement of a new discovery in the Saqqara necropolis, November 23, 2019

Ancient Egyptians mummified and buried millions of animals, often treating creatures like hawks, cats, and crocodiles with the same reverence that they would a human corpse.

The mummified lion cubs are about 2,600 years old. Khaled DesoukiI/AFP via GettyA mummy of a cat displayed after the announcement of a new discovery in the Saqqara necropolis, November 23, 2019.

The cubs were only eight months old when they were mummified. Other mummified wildcats were found alongside the two lions.

“This is the first time [a] complete mummy of a lion or lion cub” has been found in Egypt, according to Waziri. 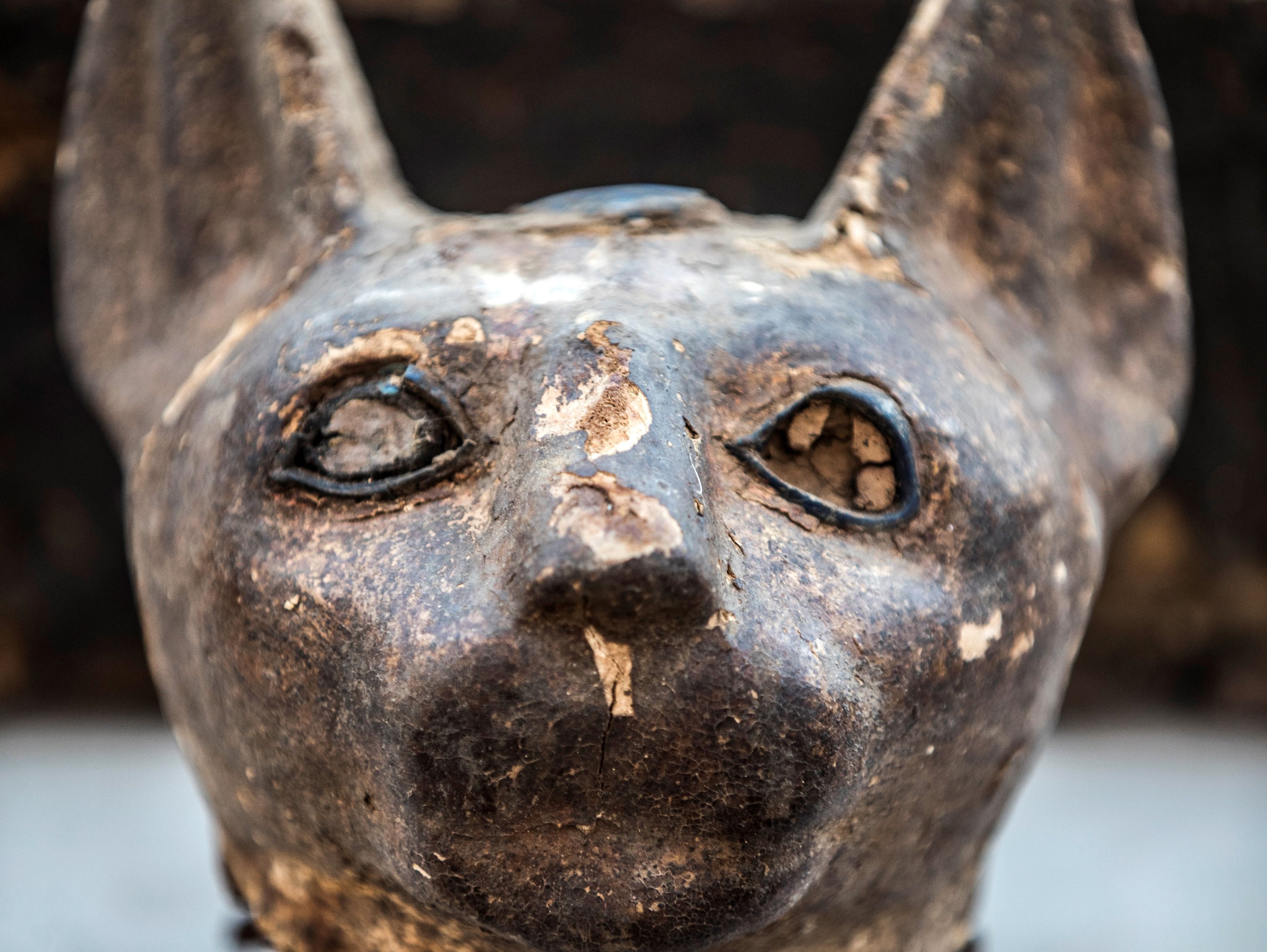 Khaled DesoukiI/AFP via GettyThe head of cat statue displayed after the announcement of a new discovery in the Saqqara necropolis, November 23, 2019.

The Egyptians believed animals were reincarnations of gods, so they honoured them by mummifying the creatures and worshipping these animals in temples. Mummified animals could also serve as offerings to those gods.

Saqqara will likely yield even more discoveries in the coming months. 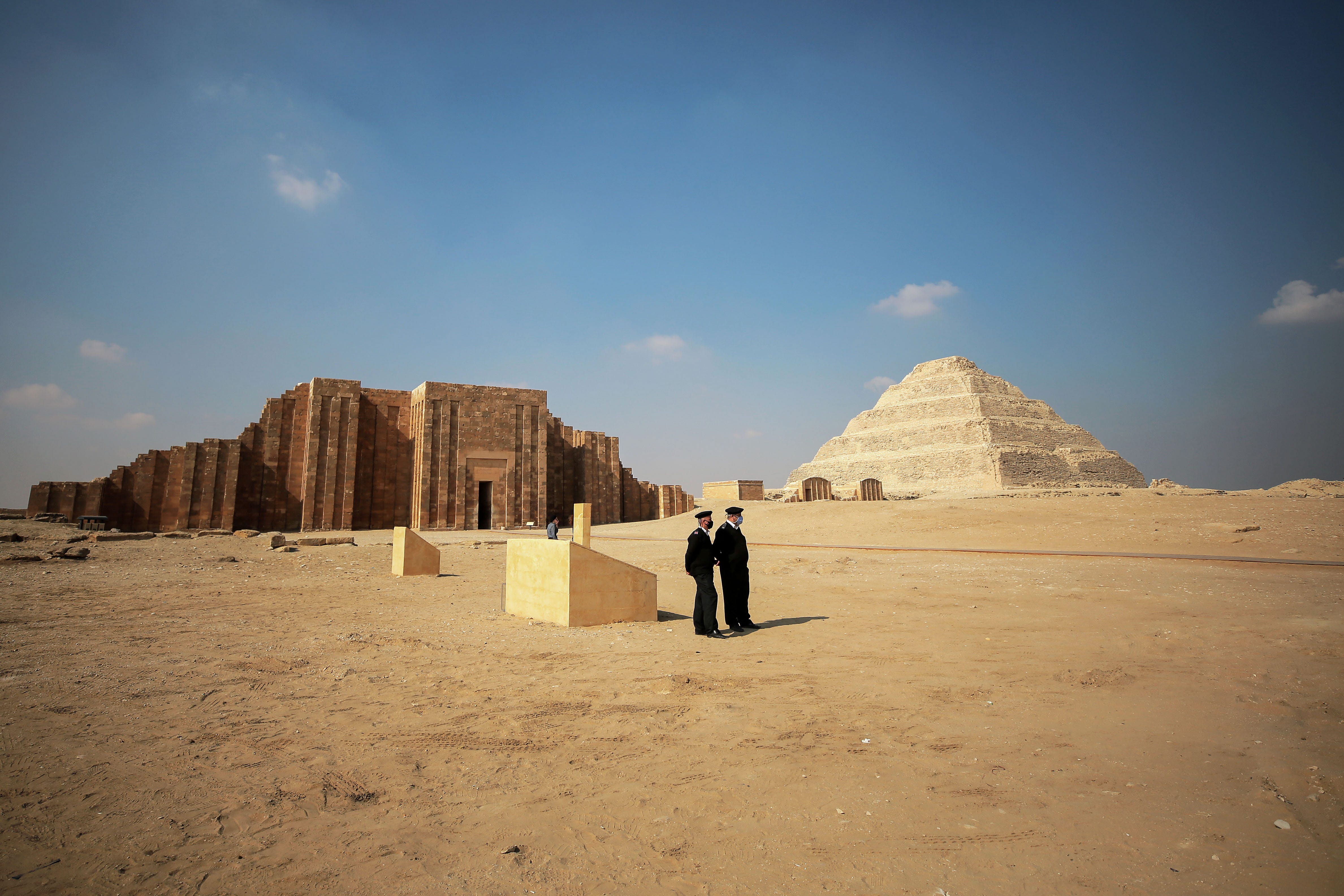 Fadel Dawood/picture alliance via GettyPolice stand guard at the Saqqara necropolis, where Egyptian antiquities officials hold a press conference to announce the discovery of at least 100 ancient coffins.

Another “promising discovery” from Saqqara will be announced soon, El-Enany told reporters on Saturday.