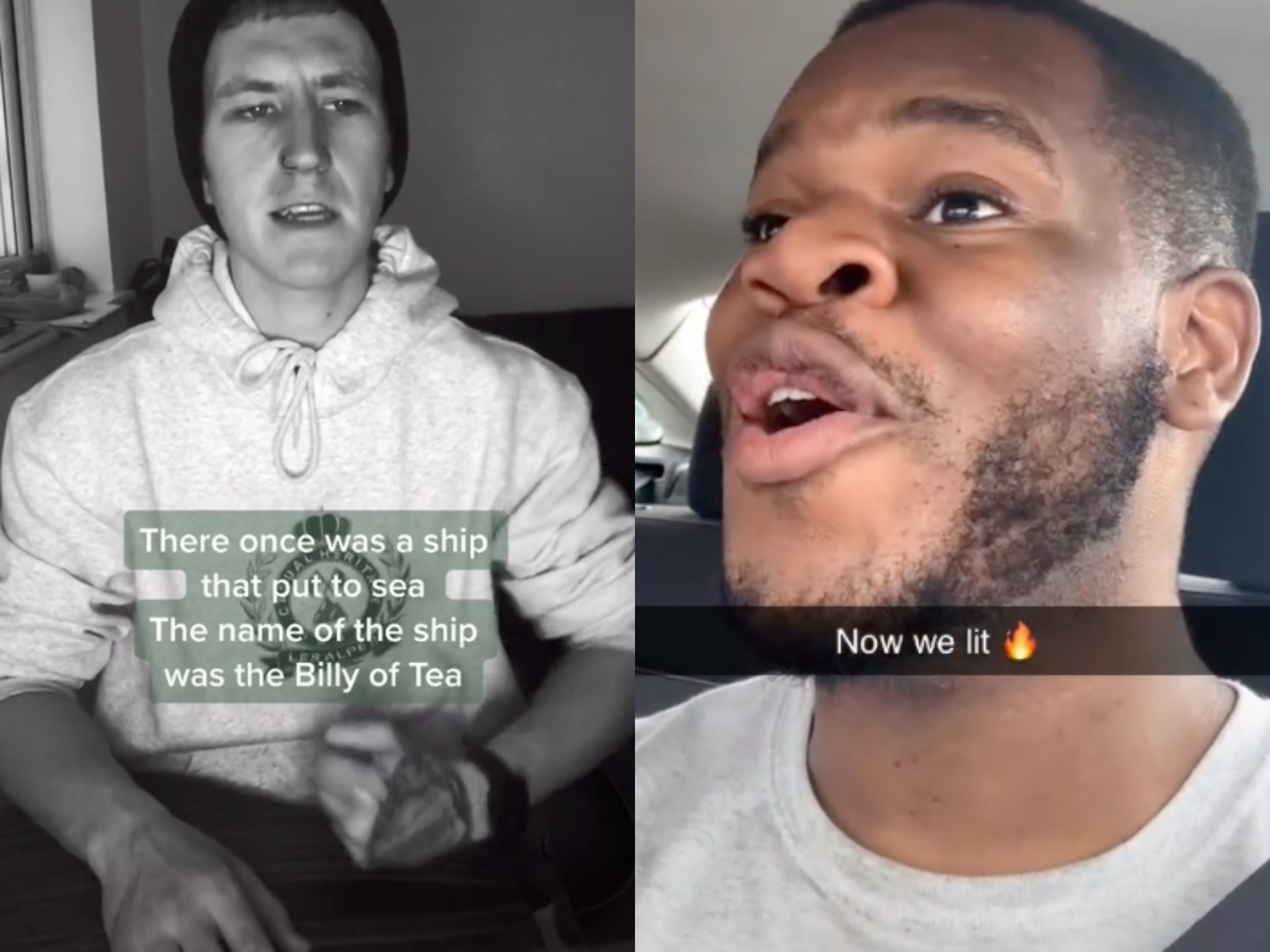 @nathanevanss/@strong_promises/TikTokSea shanties, particularly ‘The Wellerman,’ are going viral on TikTok.

Sea shanties fuelled the spirits of sailors and boat workers for hundreds of years. Now, they’re a social media sensation.

The songs were work-oriented, helping sailors coordinate tasks that required synchronised pushing or pulling, according to a report from the English Folk Dance and Song Society.

The collaborative spirit of the shanty has carried over to TikTok, where creators have popularised sea shanties â€” particularly one called “The Wellerman” â€” by singing them, creating duet chains that lead to deep harmonies, and blasting them in their cars. Now, the trend has crossed over to other platforms, with sea shanty TikTok content going viral on Twitter as well.

@strong_promisesWhen I hand my brother the aux

While the songs’ origins lie in labour, they also evoke a sense of camaraderie and “brotherhood,” several sea shanty enthusiasts told Insider.

On December 27, TikTok creator and Scottish musician Nathan Evans posted a video of himself singing “The Wellerman,” a shanty from the 19th century. In video, which has over 800,000 likes, Evans keeps time with his fist as he layers harmonies over the lyrics “Soon may the Wellerman come / To bring us sugar and tea and rum.”

“The Wellerman,” as The New York Times reported, is a shanty (one that’s perhaps better classified as a whaling song) that could have been used as a “cutting-in shanty,” sung when a crew slaughtered a whale. It’s based on the Weller brothers’ 19th century New Zealand-based whaling company.

Evans, who works as a postman, told Insider via email that he had started to post shanty videos by the request of a commenter on another one of his videos. Starting with a cover of “Leave Her Johnny” in July, he continued to post shanty videos: in December, he posted a three-partseries singing“The Scotsman” alongside his cover of “The Wellerman.” The hype, he said, helped him to gain over 300,000 followers in less than a month.

While Evans said that he hopes people check out his original music as well, there’s been a thirst for shanty content, and his videos have inspired others to collaborate with him, adding vocal part after vocal part using TikTok’s duet function.

That phenomenon draws on a collaborative spirit that’s somewhat uniquely possible on TikTok, which allows users to stack video upon video to create entirely new phenomena. TikTok’s crowdsourced “Ratatouille” musical, which saw creators organically collaborating with each other to write and perform original songs, is perhaps the best example of this.

: How a fake musical inspired by the 2007 Disney-Pixar movie ‘Ratatouille’ took over TikTok

Before Evans’ videos went viral, sea shanties were already circulating on TikTok. Their community has a name â€” “Shanty Tok” â€” and “The Wellerman” is still a dominant force.

20-year-old Jacob Doublesin, who labels himself in his TikTok bio as the “Sea-EO of Wellerman,” told Insider that he got into shanties via his college roommate, who introduced him to the genre. He posted his first video including a sea shanty on October 29, and from there, began to incorporate shanties into more of his content.

His first video featuring “The Wellerman” was uploaded on October 30. Many of his “Wellerman” related videos follow a similar format that includes clones of himself joining him to sing the song.

He said that many of his videos focus on “The Wellerman” because it continuously outperforms other shanties, something that he partially attributes to the fact that it has its own hashtag with 23.7 million views (#seashanty, for comparison, has 73.6 million). While he’d love to post more videos that feature other shanties, “they just don’t do well,” he said.

With multiple creators stumping for “The Wellerman,” and its continued performance across TikTok, it was only a matter of time before the phenomena reached critical mass and became a meme across broader social media.

“2021 is the year of the sea shanty,” Twitter user @Beertheist declared in a viral tweet on Monday, reposting a TikTok that showed 23-year-old Promise Uzowulu reacting to his brother, 21-year-old Frankline Uzowulu, playing “The Wellerman” in the car. The video broke open a dam for sea shanties to become a Twitter sensation as well.

2021 is the year of the sea shanty pic.twitter.com/ohOAGvkbtC

On TikTok, Promise’s video was even more viral, amassing nearly 5 million views and over 1 million likes in a matter of days. It’s a pitch-perfect representation of what it feels like to listen to a shanty for the first time â€” Promise starts with a sceptical expression on his face, but by the end, he’s fully into it.

“My brother sometimes plays some questionable music, so it wasn’t out of character,” he told Insider in a message, saying that he thought that his “progression towards the song” was a large part of why the video went viral. He said that he had no idea it would take off in the way it did â€” in fact, it was a weeks-old Snapchat story that he decided to post while busy studying for the NCLEX, a nursing exam.

His brother Frankline â€” the one with the aux cord, as well a student and Twitch streamer â€” told Insider that across the course of the car ride they repeated the song “three or four times.”

“I played it, and the first few choruses, he was kinda sceptical about it,” Frankline said. “He was like, ‘bro, what are you playing, this is not rap music, this is not hip-hop, it’s not like, top 100, it’s a sea shanty.'”

The video’s virality, driven by Frankline’s enthusiasm and Promise’s genuine reaction, turned “Shanty Tok” into a meme of its own right within a day.

One of the cool things about TikTok is the way people can “duet” someone else’s video and build on it.

Sea shanties inherently bear a sense of camaraderie and collaboration â€” after all, they were work songs designed to lift spirits and bring workers together in time.

As Vulture’s Kathryn VanArendonk wrote, imagery “of harpoons and pierheads and the specifics of butchering whales,” among other nautical tropes, evokes a kind of historical fantasy. Despite having historical associations with African-American slavery-era work songs, shanties today are popularly associated the British, and as VanArendonk puts it, “resiliently uncool.”


Read more:
TikTok users are obsessed with ‘WAP’ mashups, pairing the hit song with everything from ‘Phantom of the Opera’ to ‘Let It Go’

The question remains, then, as to why people are blasting them the minute they get into their car.

“A lot of people, when they hear sea shanties or they sing sea shanties, they think of having the boys around with a beer in their hand and having a fun old time,” Frankline Uzowulu told Insider. After finding “The Wellerman” on iFunny, he said, he dove into Spotify shanty playlists, picking up other tracks like “Pay Me My Money Down.”

Doublesin, the TikTok “Seo-EO of Wellerman,” told Insider that he thinks that the allure of sea shanties lies in both their novelty and ability to energize. “I think the thing people about Sea Shanties is it’s something they have never really heard beforeâ€¦ it’s the type of music that really promotes hard work and brotherhood,” he told Insider.

Ultimately, that sentiment isn’t new: it resonates in viral videos of a whole bunch of men singing the “Halo” theme song together in a bathroom, and has helped shanties rack up millions of views on YouTube. In a year in which connectivity has become more difficult than ever, perhaps a collaborative musical form â€” even one that smacks of whaling and saltwater â€” is exactly what we need.