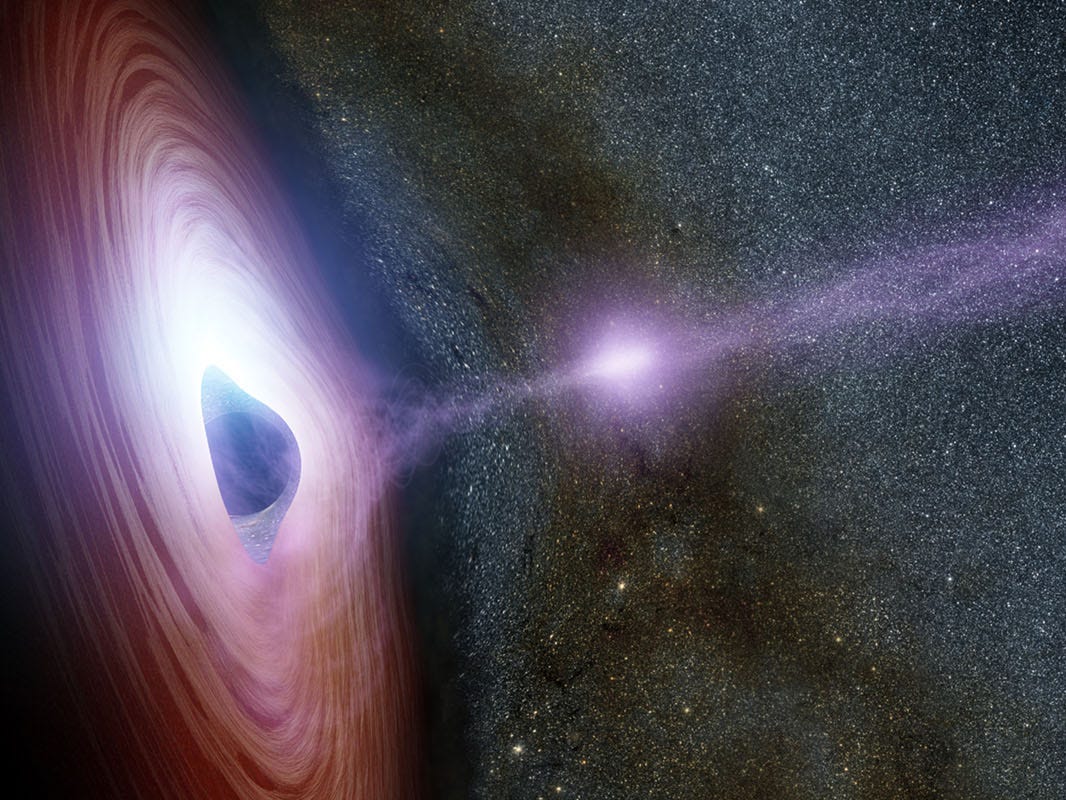 NASA/JPL-CaltechAn artist’s concept of a supermassive black hole surrounded by a swirling disk of material falling onto it.

Scientists may be on the brink of discovering a new phenomenon reverberating throughout the cosmos: a steady thrum of ripples in space-time.

Albert Einstein first predicted that colliding massive objects like black holes would create such ripples, called gravitational waves. But he thought that the noise and vibrations on Earth would prevent us from ever being able to detect these waves. In that aspect, Einstein was wrong. One of the most remarkable experiments in history â€” the Laser Interferometer Gravitational-Wave Observatory (LIGO) â€” detected gravitational waves for the first time in 2015.

Those waves came from two black holes that crashed 1.3 billion light-years away, sending out ripples that eventually travelled through our planet and registered in LIGO’s giant, L-shaped detectors in Washington and Louisiana. Three researchers who helped conceive of the experiment earned a Nobel Prize in physics.

Since that first discovery, LIGO and its Italian counterpart, Virgo, have detected likely gravitational waves at least 50 times, from various combinations of black holes and neutron stars colliding. 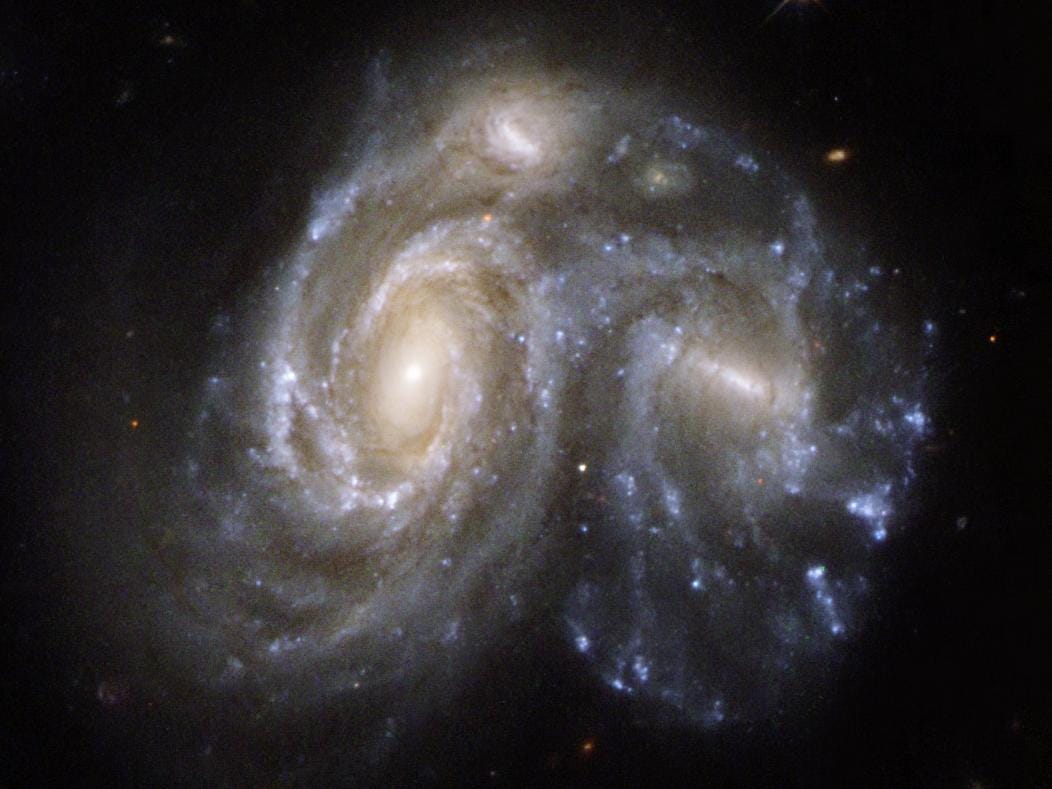 Scientists think that the centre of every large galaxy contains a supermassive black hole that’s millions or even billions of times more massive than the colliding objects that LIGO and Virgo have detected. These supermassive black holes should merge when galaxies crash into each other and slowly become one. The hypothetical hum from that activity throughout the universe is referred to as the “gravitational-wave background,” or GWB.

But nobody has discovered definitive evidence of it yet.

That’s where the new research comes in. Astrophysicists at the North American Nanohertz Observatory for Gravitational Waves (NANOGrav) have detected what may be the first signs of this background radiation in space-time. Their research was published in the The Astrophysical Journal Letters.

“These enticing first hints of a gravitational-wave background suggest that supermassive black holes likely do merge, and that we are bobbing in a sea of gravitational waves rippling from supermassive black hole mergers in galaxies across the universe,” Julie Comerford, an astrophysicist on the NANOGrav team and an associate professor at the University of Colorado Boulder, said in a press release.

A gravitational-wave observatory the size of our galaxy 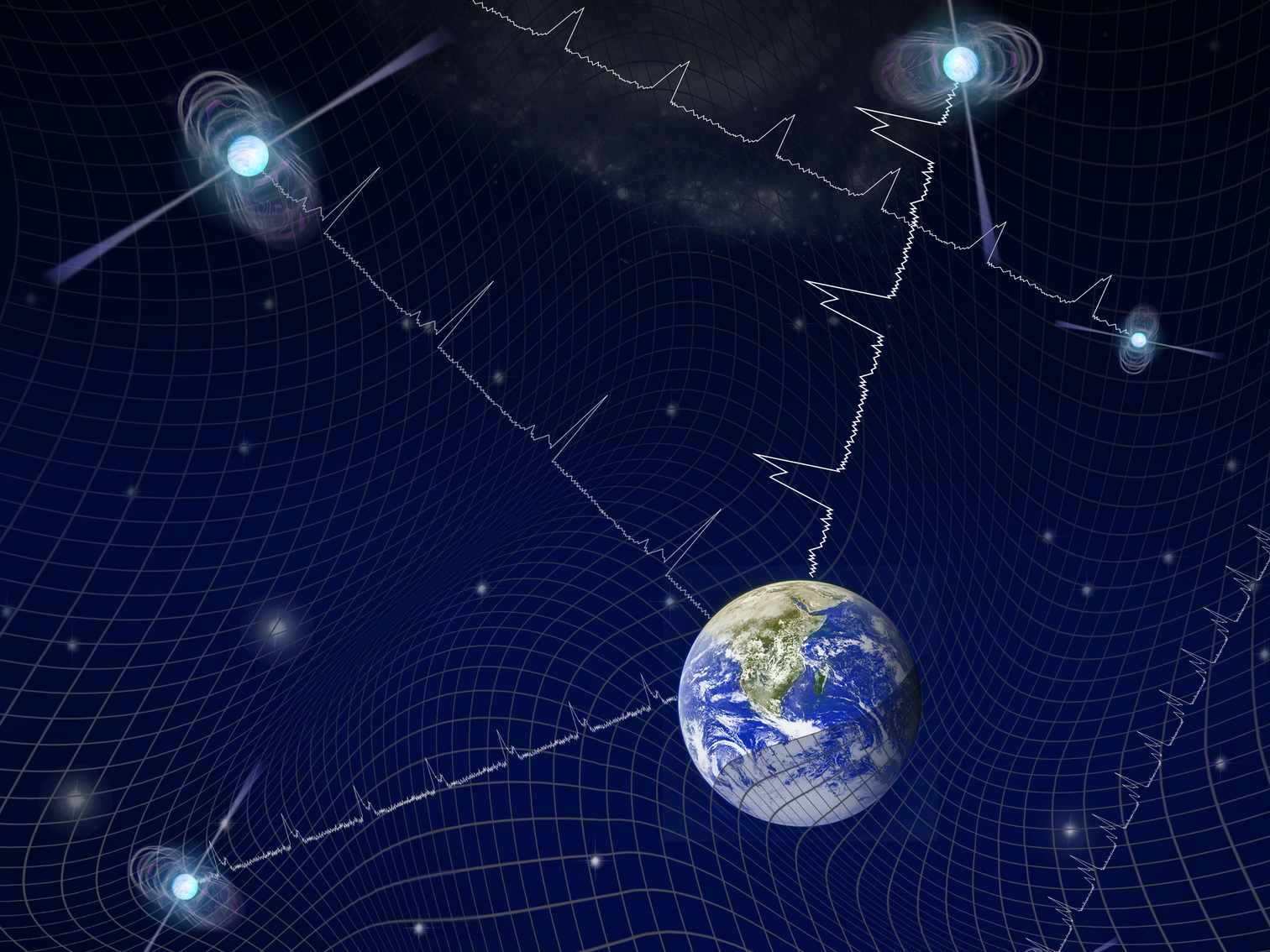 NANOGrav/T.KleinAn artist’s interpretation of signals travelling from pulsars to Earth.

To search for the gravitational-wave background, the NANOGrav researchers sought to imitate LIGO on a much larger scale.

LIGO works by shooting out a laser beam and splitting it in two. The light then travels down the detector’s two 2.5-mile-long arms. The beams bounce off mirrors at the ends of those arms and converge back near the beam splitter, where they should cancel each other out. But when a gravitational wave comes through, it warps space-time â€” making one tube slightly longer and the other shorter for a brief moment. As a result, the two beams return to the splitter at different times, resulting in flashes of light.

NANOGrav works in a similar way. But instead of mirrors, it uses millisecond pulsars: extremely dense dead stars that spin rapidly, sending a burst of light towards Earth every millisecond. Their precise timekeeping rivals an atomic clock, so these celestial objects are ideal for detecting changes in the fabric of space-time.

Just as LIGO researchers detect gravitational waves by measuring changes in the arrival times of light beams, NANOGrav researchers do so by measuring variations in the arrival times of light from pulsars throughout the galaxy. As gravitational waves move through the cosmos, they squeeze or stretch the distance that this light travels to reach Earth, changing its arrival time by just a few hundred nanoseconds. Some pulsars’ lights arrive a little sooner than would be expected, while others arrive a little later.

“We actually create a galaxy-sized gravitational wave detector within our own Milky Way,” Joseph Simon, an astrophysicist at the University of Colorado, Boulder, and the lead author of the new paper, said in a press conference at the meeting of the American Astronomical Society.

This method is called a “pulsar timing array.”

Since the distance between Earth and each of these pulsars is far larger than the length of LIGO’s arms, NANOGrav could detect low-frequency gravitational waves that come from faraway mergers of supermassive objects. Unlike the brief outbursts that LIGO detects, these low-frequency waves could be continuously passing through Earth for years or even decades at a time.

By simply monitoring the pulsars’ lights for a collective, simultaneous shift in timing, scientists should be able to identify the moment when a gravitational wave arrives or leaves our vicinity.

To watch pulsars in this way, NANOGrav used the National Science Foundation’s Green Bank Telescope in West Virginia and the Arecibo Observatory in Puerto Rico. 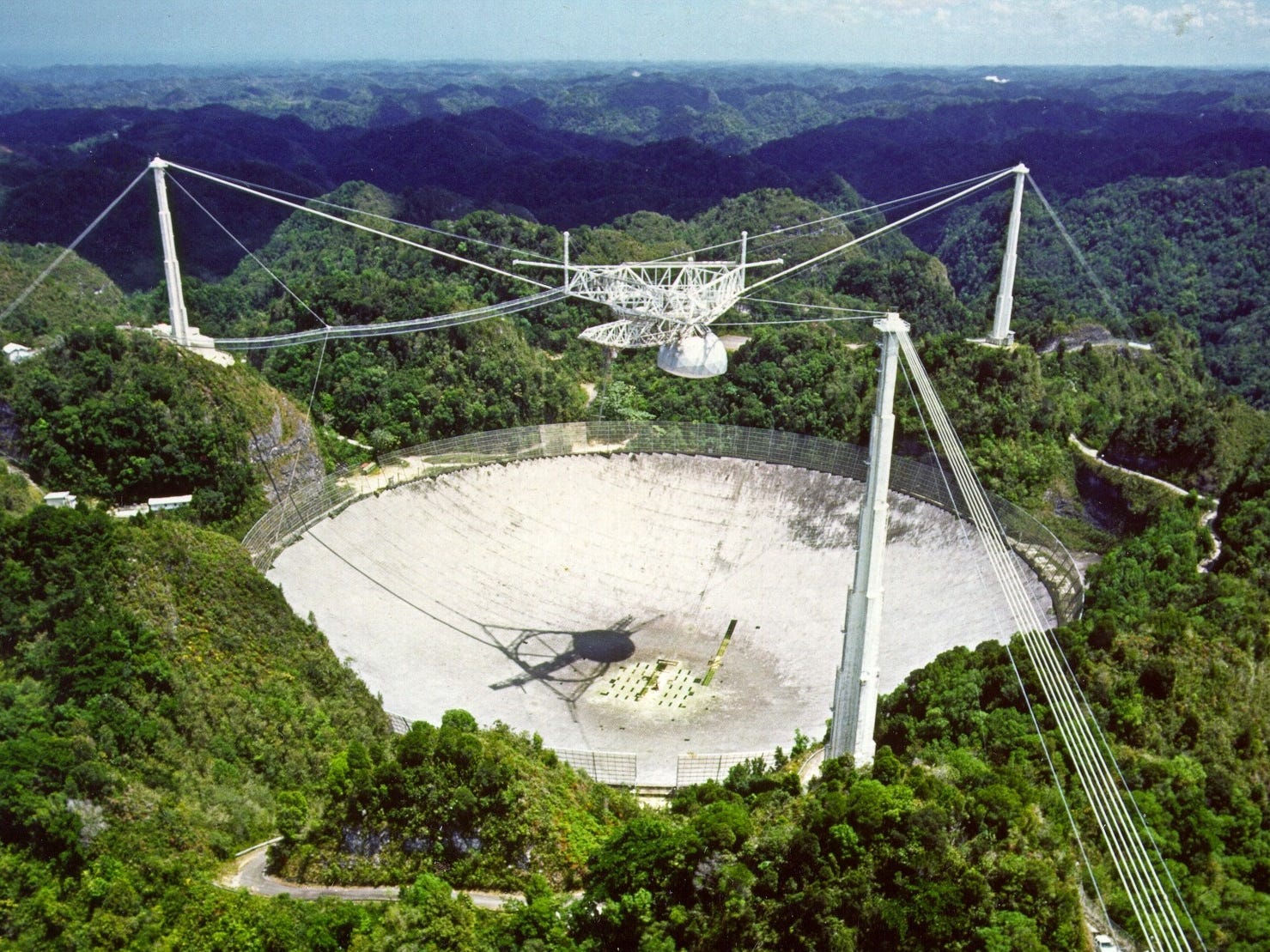 But after two major cable breaks, the Arecibo telescope collapsed on itself in December. Its 900-ton platform crashed into the dish below, shattering its panels with no hope of recovery. The researchers were using Arecibo until its first cable failure in August.

“This is, of course, a major loss for our project,” Paul Demorest, a NANOGrav scientist who works at the US National Radio Astronomy Observatory, said at the AAS meeting. 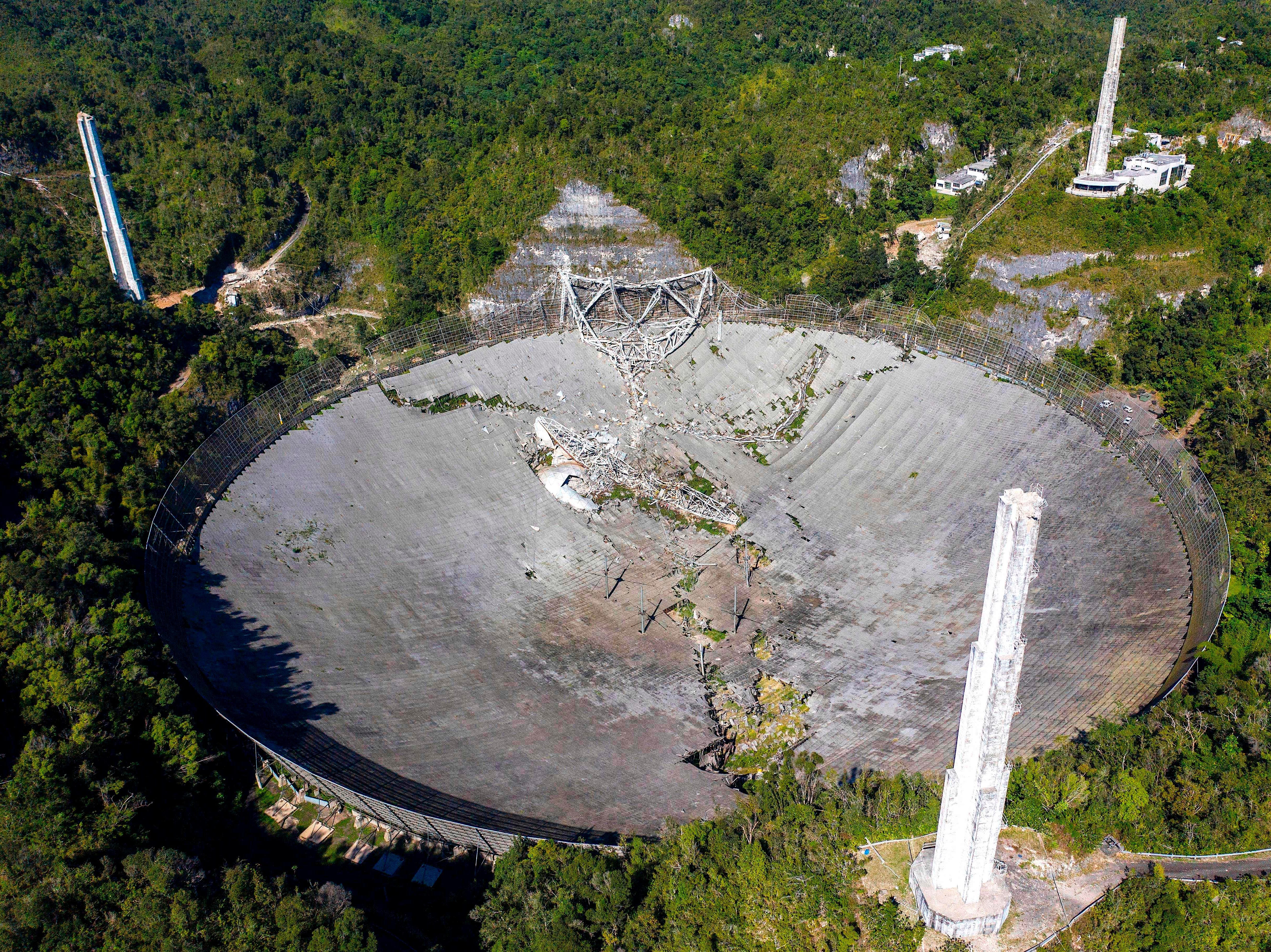 Ricardo Arduengo/AFP/Getty ImagesAn aerial view shows the damage at the Arecibo Observatory in Puerto Rico after one of the main cables broke, December 1, 2020.

In analysing data from 45 pulsars â€” each one observed for at least three years â€” NANOGrav researchers discovered a coinciding shift in the timing of the pulsars’ light. They think this may be the gravitational-wave background.

“We walked through each of the pulsars one by one. I think we were all expecting to find a few that were the screwy ones throwing off our data,” Simon said in the release. “But then we got through them all, and we said, ‘Oh my God, there’s actually something here.'”

The signal is more powerful at lower frequencies, which is what the researchers expect to see in the gravitational-wave background. But to be confident that they have truly discovered this new phenomenon, they need to analyse more data â€” some of which they have already collected â€” to make sure the trend holds across datasets.

“We have this really significant evidence for a common signal. However, we can’t quite say what it is yet,” Simon said.

NANOGrav is now working with two pulsar timing array projects in Europe and Australia to see if they have similar signals in their data.

Demorest thinks NANOGrav may get definitive evidence that this is the gravitational-wave background within the next year. Simon said it would probably take longer than that to analyse the data, though.

In addition to analysing new data, Demorest said, NANOGrav will work on expanding its array to include more pulsars and use more sensitive telescopes â€” ones that haven’t even been built yet. Eventually, the scientists hope to pinpoint and study the supermassive black holes that are sending out gravitational ripples.

“Being able to detect the gravitational-wave background will be a huge step but that’s really only step one,” Simon said. “Step two is pinpointing what causes those waves and discovering what they can tell us about the universe.”