Scarlett Johansson and Colin Jost are now married. Here's a timeline of their relationship. 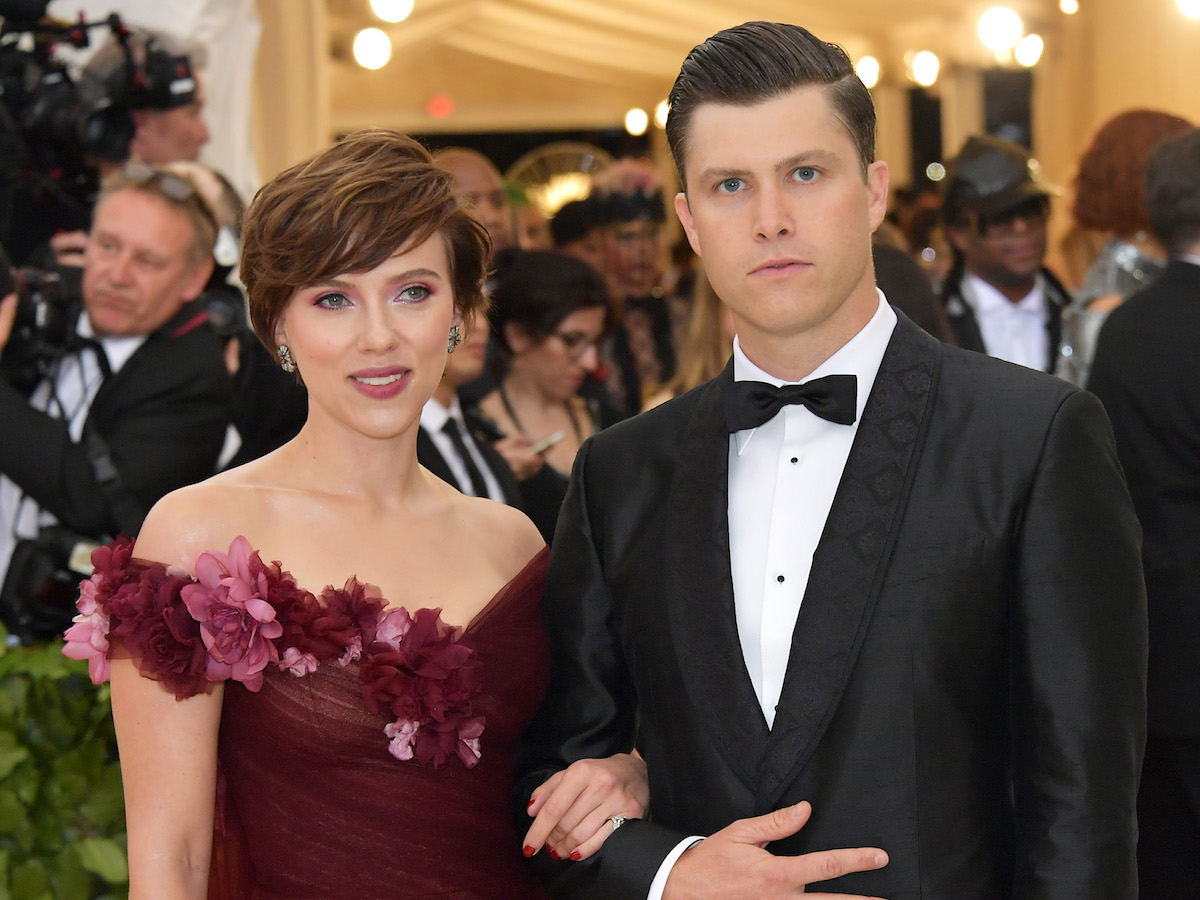 For years, actress Scarlett Johansson has been a regular host on “Saturday Night Live” â€” and it’s also the place where she and now-husband Colin Jost first met.

Jost, a head writer and star on “SNL,” and Johansson first met over a decade ago â€” and, on Thursday, news broke that the two wed in an intimate ceremony after three years of dating.

Here’s a timeline of Scarlett Johansson and Colin Jost’s relationship:

November 2010: Johansson hosted “SNL” and appeared in one of Jost’s sketches. 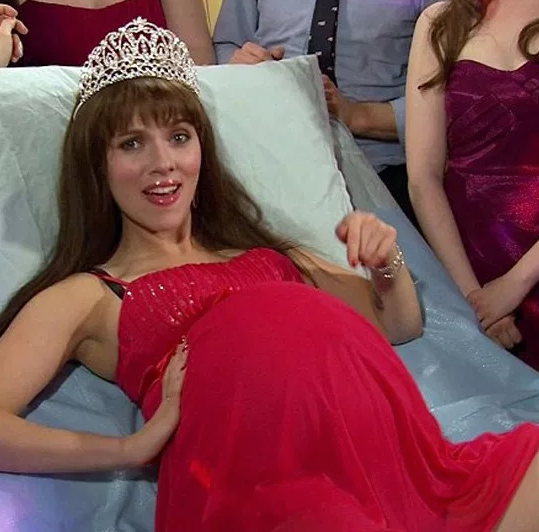 NBCScarlett Johansson recalled that it was a ‘dumb parody.’

In November 2010, the third time the actress hosted “Saturday Night Live,” she appeared in a sketch that Jost had written – it parodied MTV’s “Teen Mum” and “16 and Pregnant.”

“It was some dumb parody that he had written, and he was in there partly directing this segment we had to do,” Johansson recalled to The Hollywood Reporter in 2019.

“That’s my first memory of him. He seemed very confident at the time. I don’t know if he felt that way, but in that environment, if you’re not confident as a writer, your stuff just never gets produced,” she added. 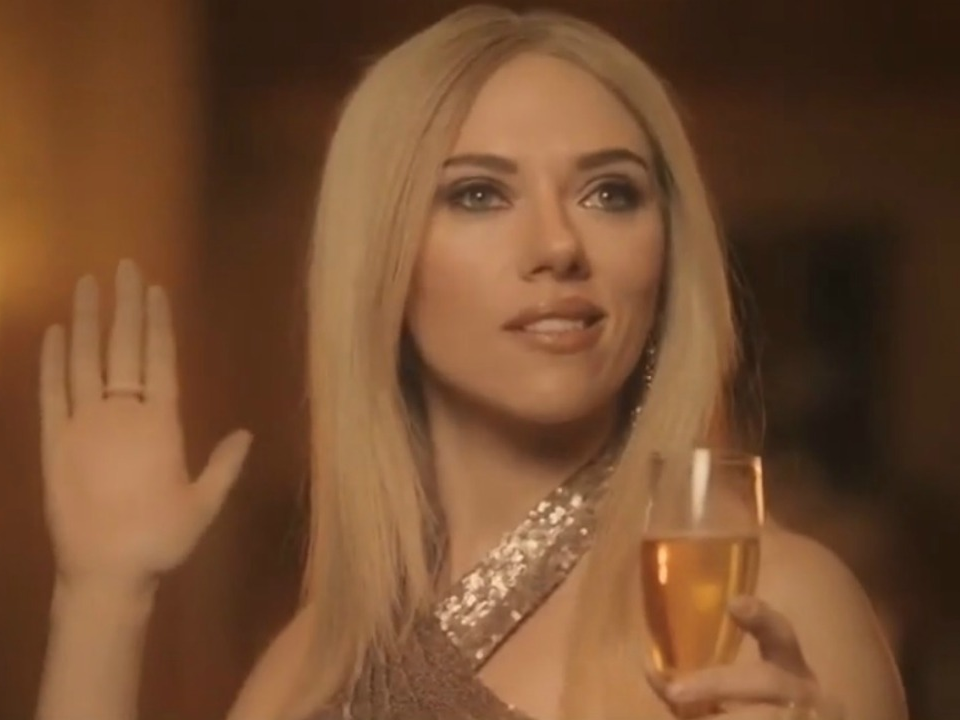 Appearing in a fragrance sketch titled “Complicit” as Ivanka Trump, Johansson hosted “SNL” for the fifth time in her career on March 11, 2017.

Just two months before, People magazine reported that Johansson had filed for divorce from her second husband, journalist Romain Dauriac – she was previously married to “Deadpool” actor Ryan Reynolds from 2008 to 2011.

As for Jost, his relationship with “Parks and Recreation” actress Rashida Jones had ended. Splash NewsScarlett Johansson was spotted arriving at the ‘SNL’ cast party with Jost.

According to Life & Style magazine, Johansson and Jost were set up on a date by “SNL” co-star Kate McKinnon sometime between March and May of 2017.

The two reportedly showed some PDA at the cast party. Page Six reported from “multiple sources” that the two “made out at least twice … at the bar in front of everyone.”

July 3, 2017: Jost and Johansson were spotted on a date together. 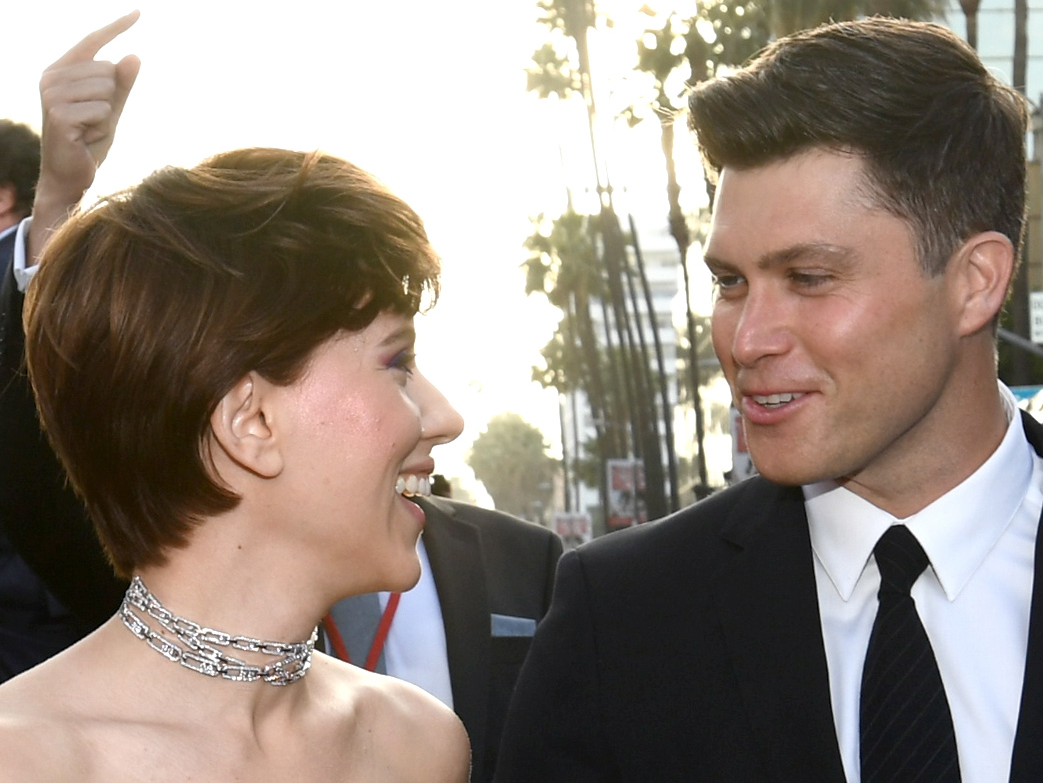 Emma McIntyre/GettyThe Daily Mail released photos of the duo on a date.

On July 3, 2017, the couple was spotted by Daily Mail at The Palm restaurant in East Hampton, New York, for a date. They were also spotted later that week in Montauk, New York, at Ditch Plains Beach with Jost’s brother and sister-in-law. 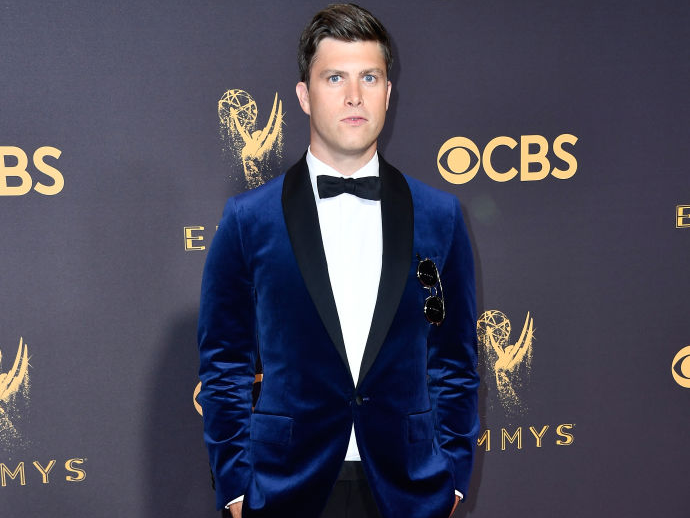 Frazer Harrison/Getty ImagesScarlett Johansson was working at the time Jost attended the Emmy’s.

Speaking with “Entertainment Tonight,” Jost dodged questions about having a date to the Emmy Awards but later spoke about Johansson.

He said “she’s wonderful” but that “she’s working, so otherwise she would be here.” “She’s pretty cool,” he continued. “It’s hard to have a lot of complaints … she’s pretty awesome.”

Jost also revealed that they actually first met back in 2006 when Scarlett Johansson first hosted “SNL” during his first year as a writer for the show, before he landed the “Weekend Update” role and became a head writer. 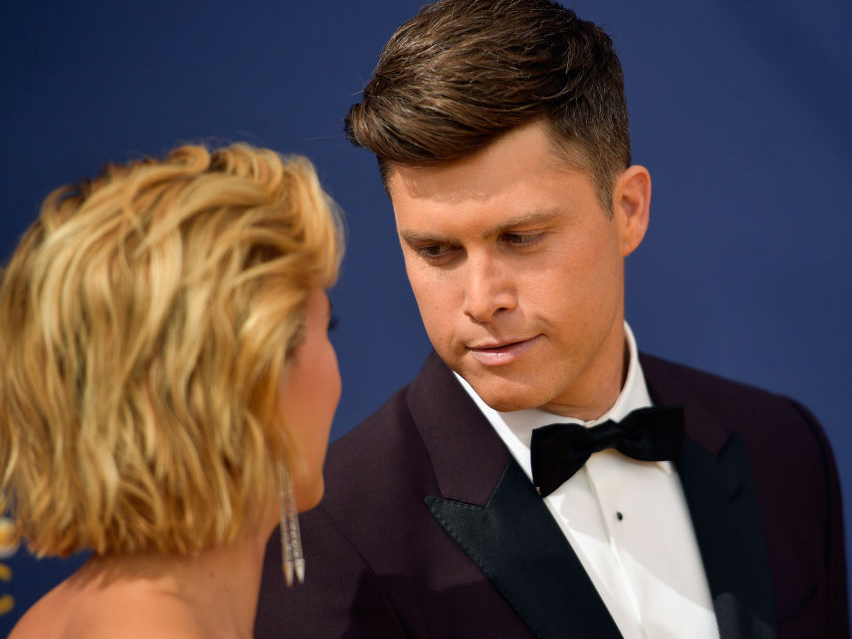 Matt Winkelmeyer/GettySources close to Colin Jost said the two were ‘in love.’

People magazine reported that the couple celebrated Johansson’s birthday together with an intimate dinner at 1700 House in the Hamptons and that one of Jost’s friends said the pair met each other’s families.

November 20, 2017: The couple made their first public appearance together. 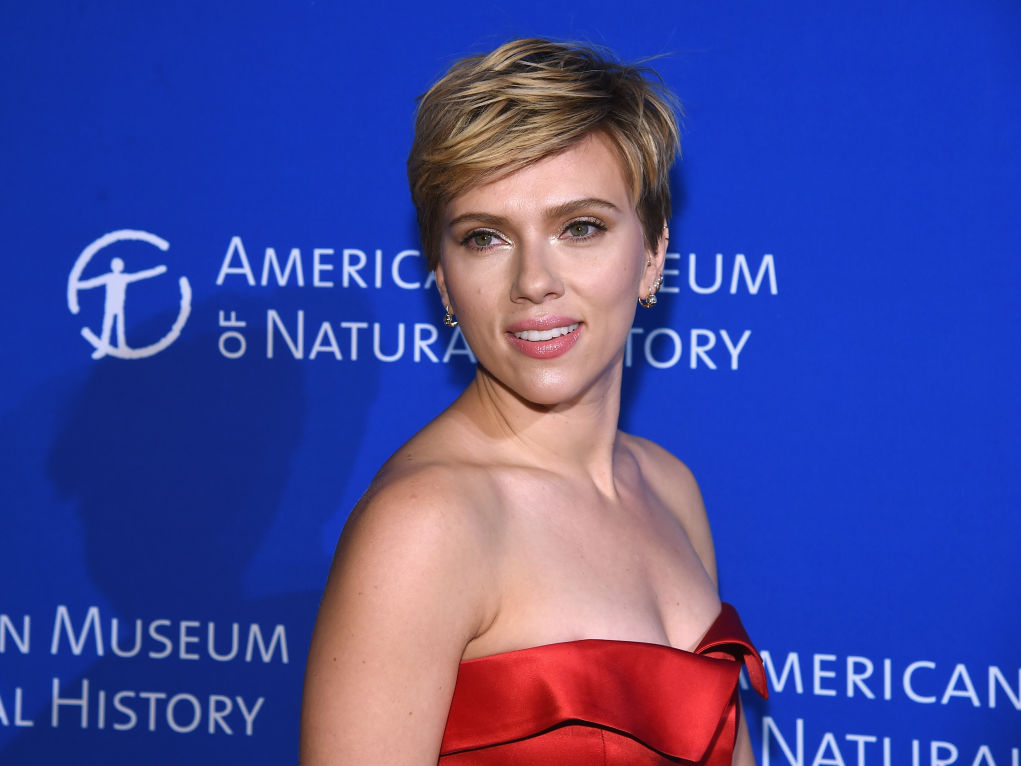 Jamie McCarthy/GettyThe two appeared together on the red carpet.

Johansson and Jost made their first official appearance together at the 2017 American Museum of Natural History Gala. Vogue released photos of the duo.

December 16, 2017: Scarlett and Colin were seen holding hands during “SNL.” 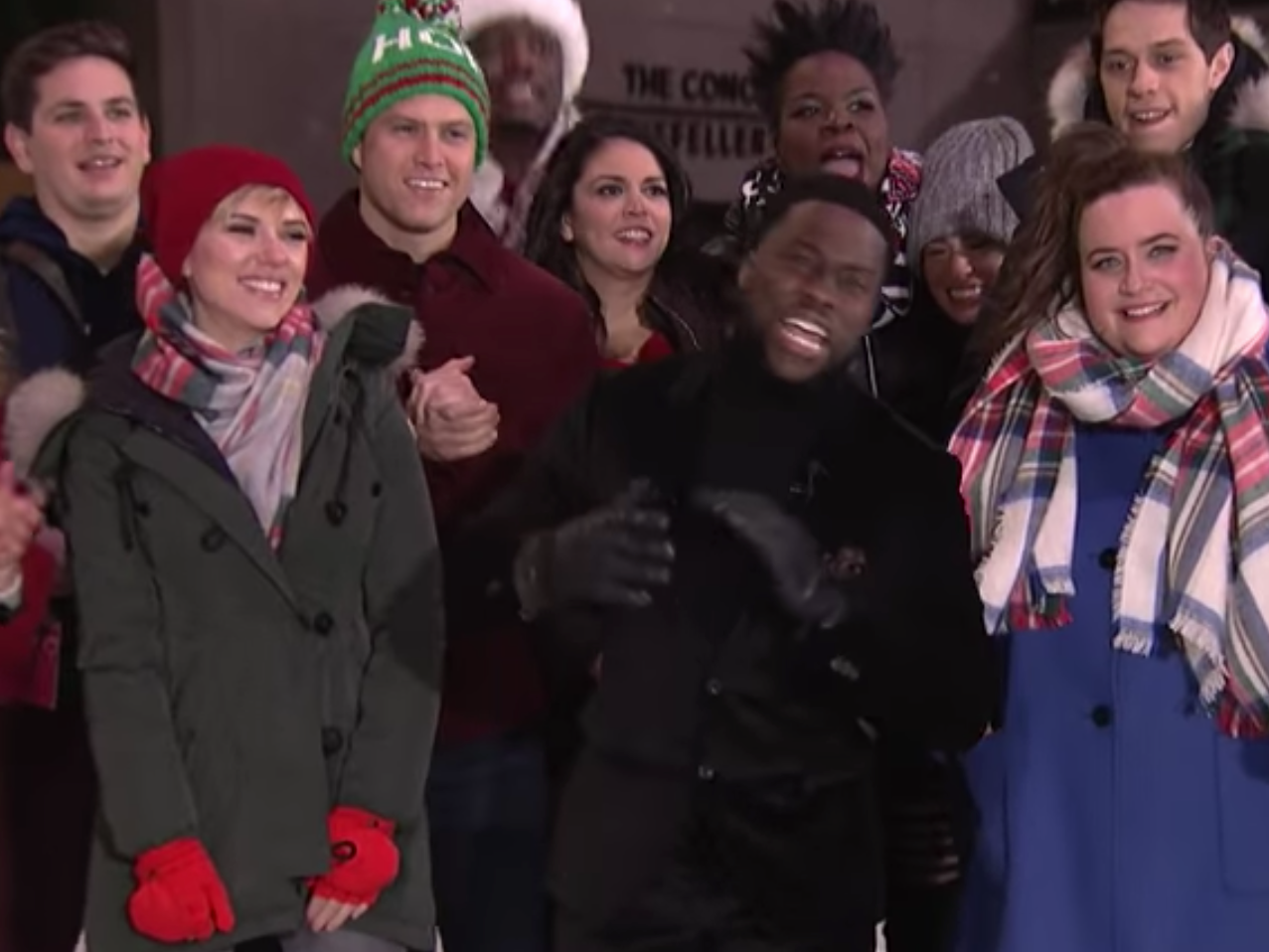 NBCColin Jost and Scarlett Johansson appeared together again on ‘SNL.’

As Kevin Hart closed out his episode hosting “SNL,” the cast is shown ice skating around 30 Rock, with Jost and Johansson standing next to each other before ice skating and holding hands. Johansson also appeared in the episode, reprising her role as Ivanka Trump. 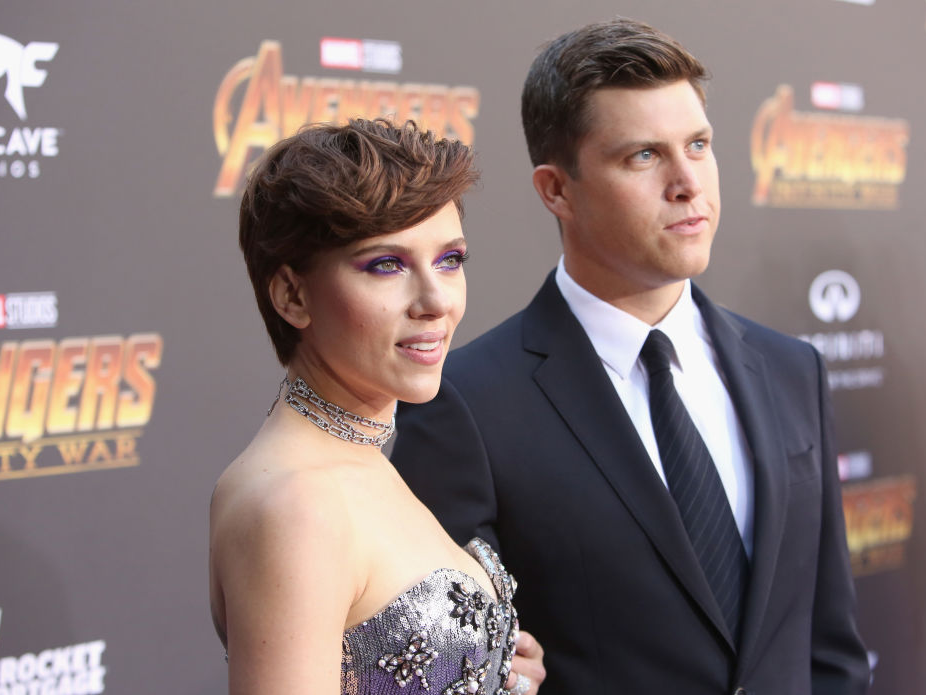 Although it was pretty clear the Johansson and Jost had become something of an item over the past year, the couple walked the red carpet together for Johansson’s big night at the “Avengers: Infinity War” premiere.

Earlier that day, Johansson appeared on “Ellen” joking that it was “hard to pick” her favourite “Weekend Update” anchor, before confirming that she was “a Colin fan.” 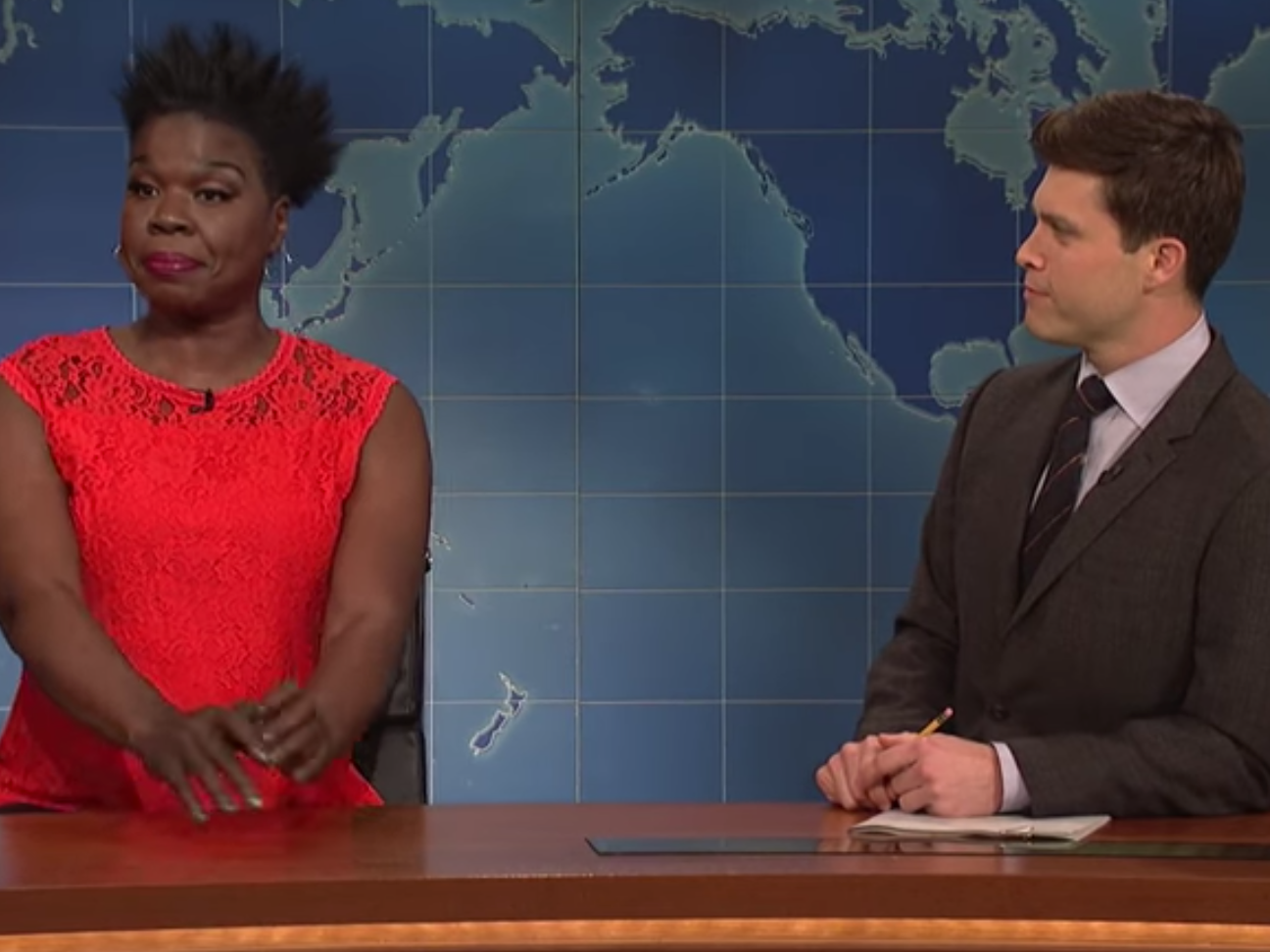 NBCColin Jost told Leslie Jones he has a girlfriend while on ‘SNL.’

During a bit on “Weekend Update” involving fellow-co-star Leslie Jones going through failed relationships, she stopped at a photo of Jost before saying that he was “so cute and sweet and kind but it would never work because he’s gay.” 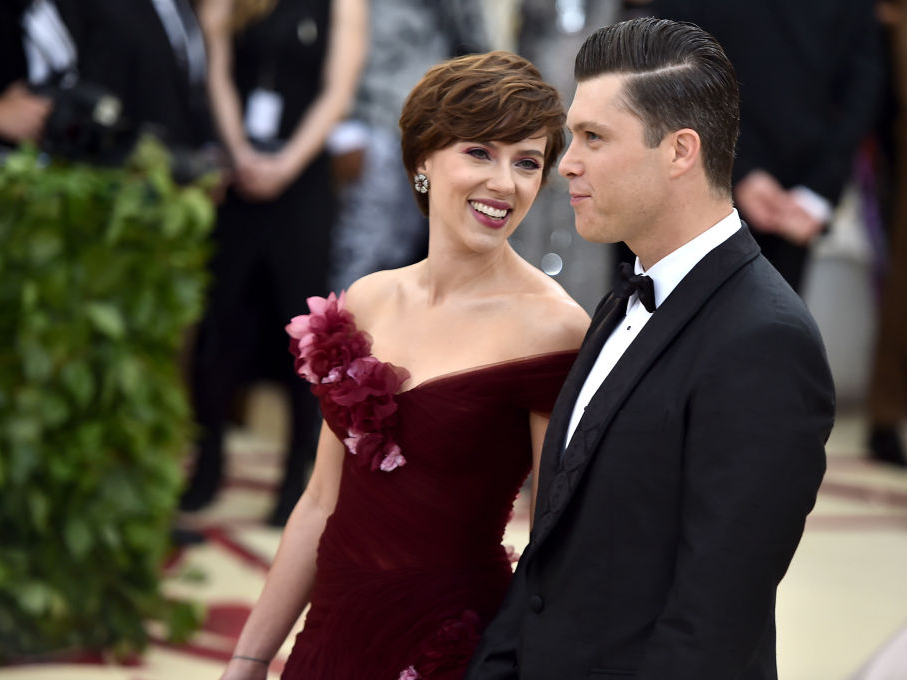 In May 2018, Jost and Johansson attended the Met Gala together in New York City. 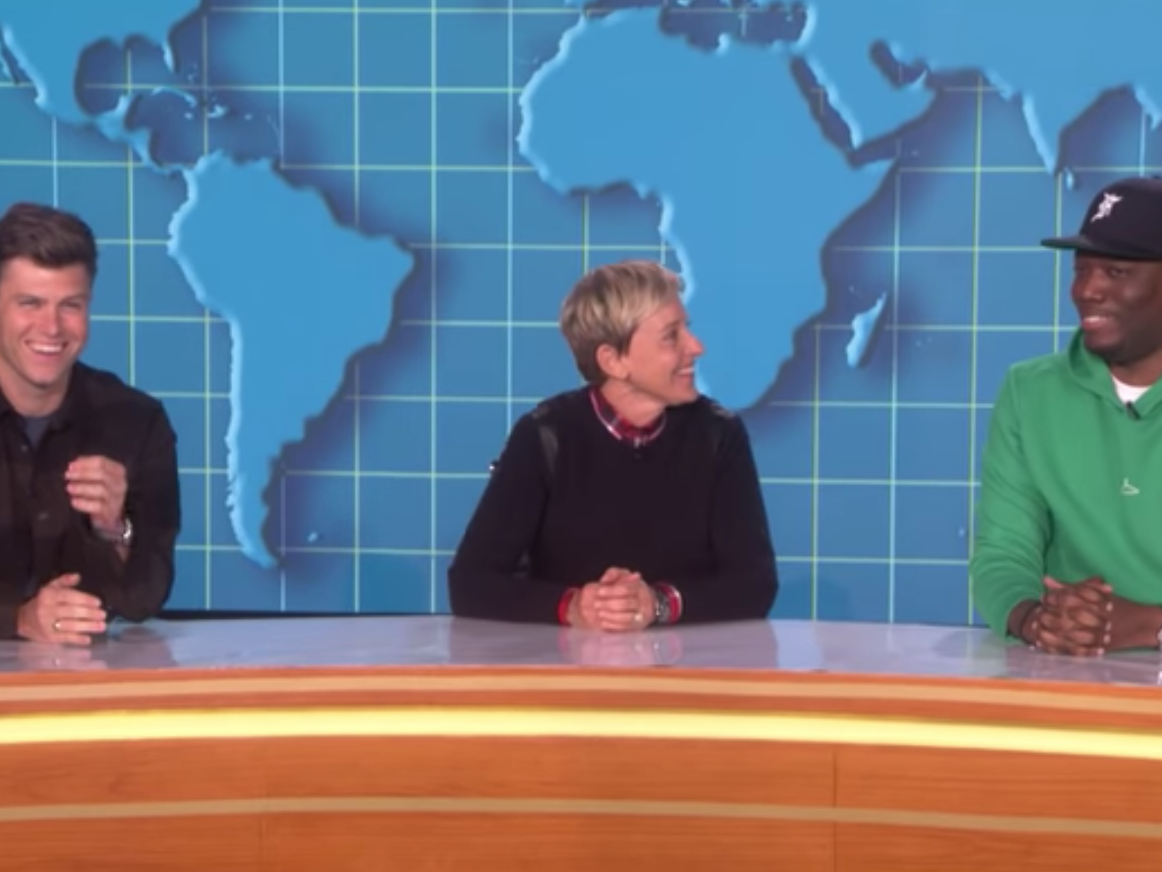 Appearing on “Ellen” together before hosting the 2018 Emmy Awards, Jost and Michael Che spent part of the taping discussing Jost and Johansson’s relationship.

Che joked that he doesn’t feel left out because he’s in a relationship with “the Times Square Elmo” and mentioned that Jost has “changed a lot since” he started dating Johansson.

Jost countered saying that Che has “never invited” him anywhere, with Che explaining that he believed Jost probably had “better things to do” that are Johansson-related than “come to this dive bar with me and watch a Yankees game.” Danny Moloshok/Invision for the Television Academy/APScarlett Johansson and Colin Jost at the 2018 Emmy Awards.

The “Avengers: Infinity War” actress wore a white sequined dress paired with yellow eye makeup when she joined Jost, at the Emmy Awards.

Johansson and Jost walked the carpet together and Jost co-hosted the show with “Saturday Night Live’s” Michael Che.

May 19, 2019: Johansson’s publicist announced the pair is engaged. 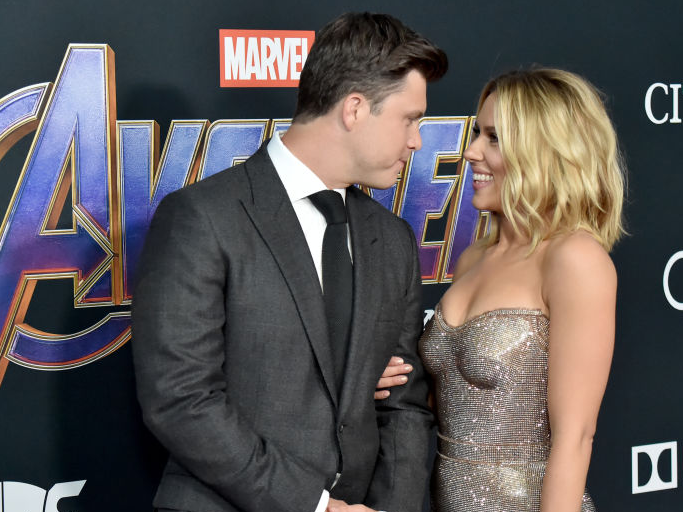 Jeff Kravitz/FilmMagicColin Jost and Scarlett Johansson at an event in 2019.

Johansson’s publicist Marcel Pariseau confirmed the news to Associated Press and a wedding date has not been set yet.

December 2019: While hosting “SNL,” Johansson called Jost the “love of my life.” 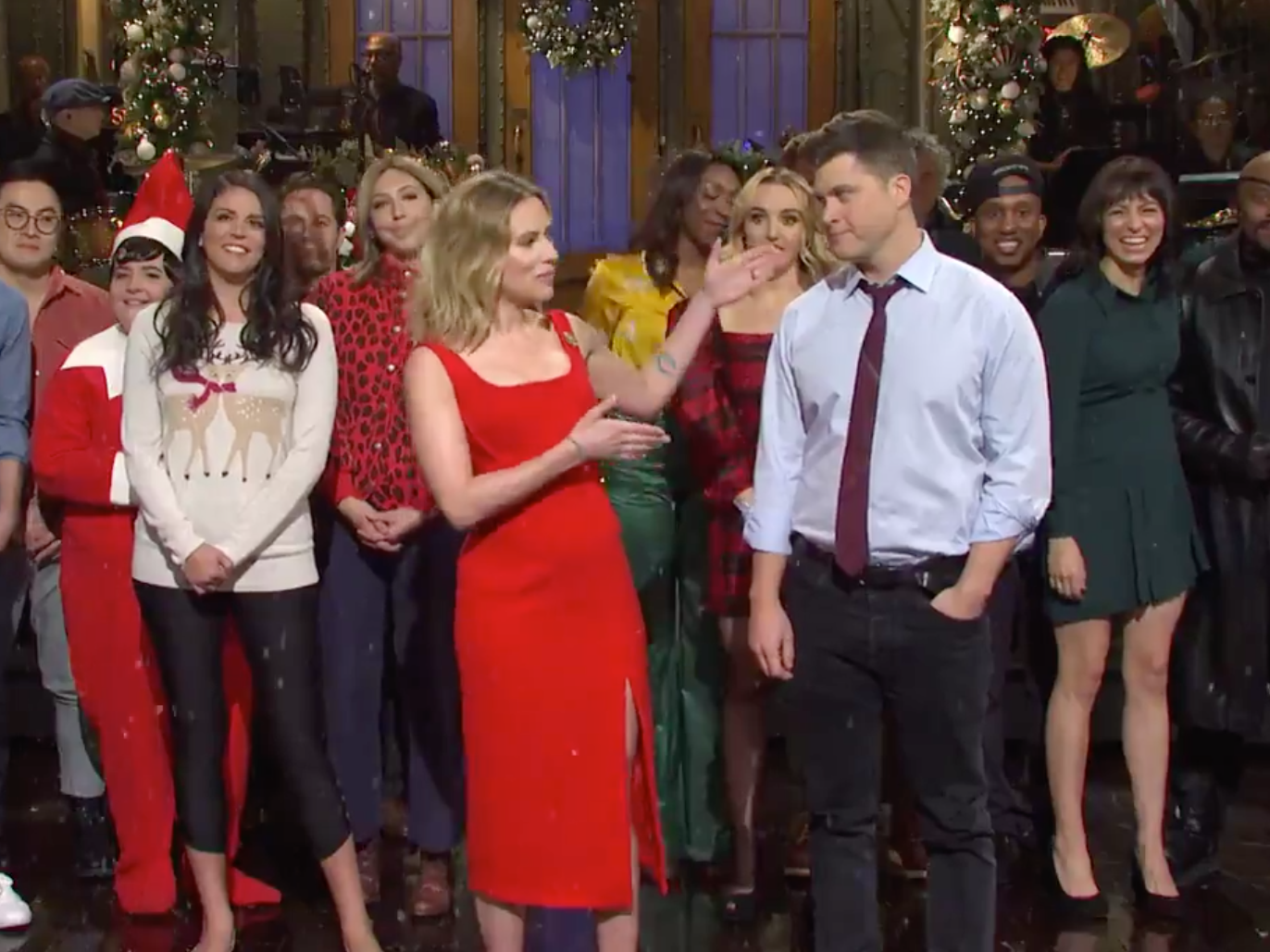 During her sixth time hosting “Saturday Night Live,” the actress gave a Marvel-inspired monologue that concluded with a sweet sentiment about the show and her fiancé.

“This place means so much to me. I have so many friends here and I met the love of my life here,” she said, hugging Jost and giving him a kiss.

October 2020: The pair wed in an intimate ceremony. 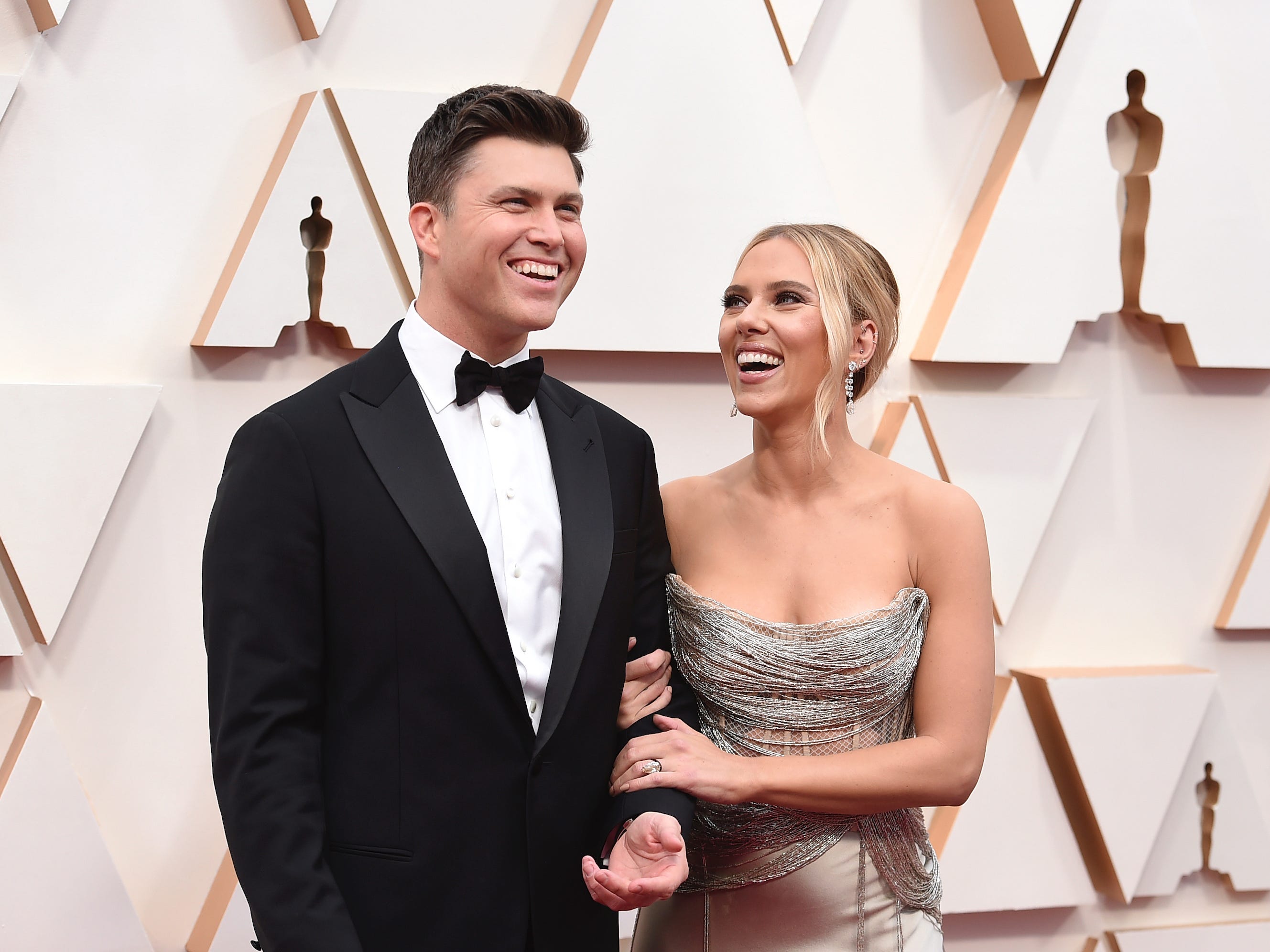 On Thursday, Meals on Wheels America broke the news that the pair wed.

The organisation shared an Instagram post of the Staten Island Ferry with cans tied to it and “Just Married” on the top, writing:

“We’re thrilled to break the news that Scarlett Johansson and Colin Jost were married over the weekend in an intimate ceremony with their immediate family and love ones, following COVID-19 safety precautions as directed by the CDC … “

8 of the wildest, most controversial ‘Saturday Night Live’ performances of all time