Sarah Paulson and Holland Taylor have been together for 5 years. Here's a timeline of their relationship. 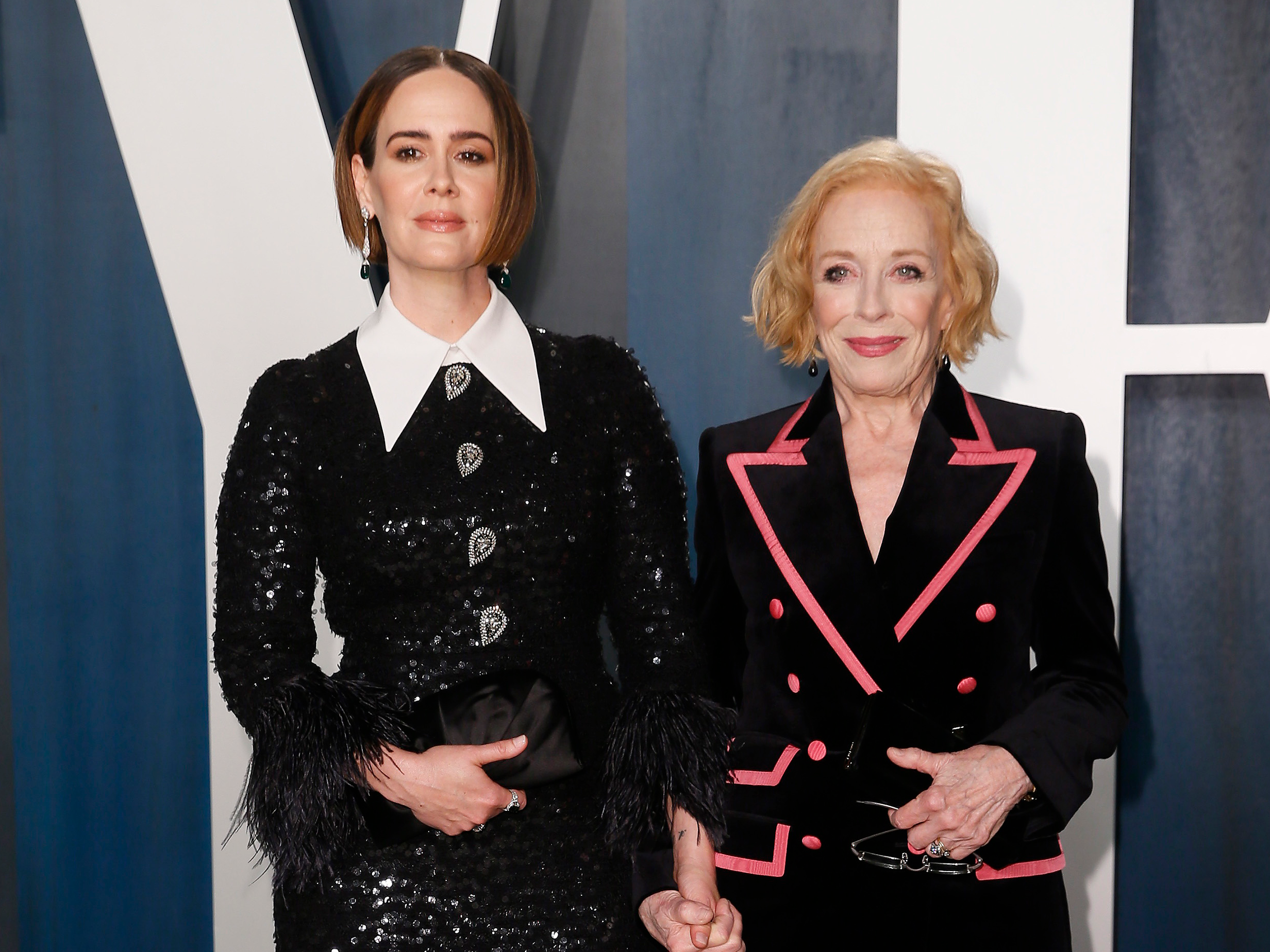 DANNY MOLOSHOK/ReutersSarah Paulson and Holland Taylor have been together for five years.

Hollywood actresses Sarah Paulson and Holland Taylor have been together for five years now, and the pair went from quietly dating to working to normalize age-gap relationships.

From when they first met to today, here’s a complete timeline of Paulson and Taylor’s relationship:

2005: The pair apparently first locked eyes at a party a decade before they started dating. Paulson and Taylor first met at a party back in 2005, but Paulson was dating actress Cherry Jones at the time.

She told The New York Times in 2016 that she was instantly blown away by Taylor’s beauty that first time they met, saying Taylor was “probably the most exquisitely beautiful woman” she’d ever seen.

2015: Taylor slid into Paulson’s DMs after they reconnected while working on a project for Martha Plimpton. On a 2019 episode of “Watch What Happens Live With Andy Cohen,” Paulson said that they started following each other on Twitter after working together on a PSA for Martha Plimpton’s women’s rights organisation in 2015.

“It’s a long story. We met a very, very long time ago. I was with someone else; she was, too,” Paulson recalled. “We sort of breezed by one another, and then started following each other on Twitter, and then … “

November 2015: Taylor revealed that she was dating a much younger woman in a radio interview, but left out Paulson’s name. 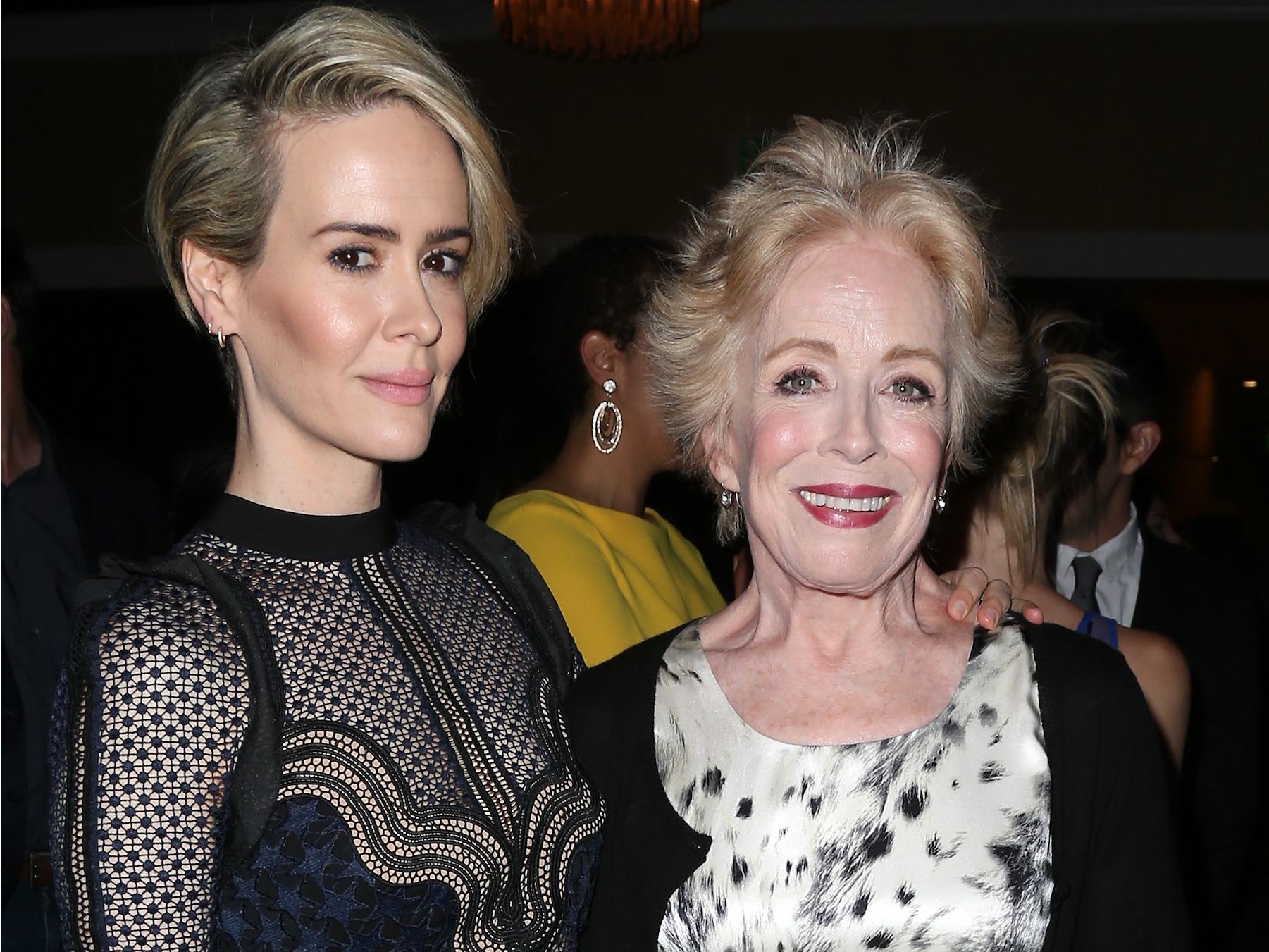 According to Entertainment Tonight, Taylor discussed the age difference between her and her new girlfriend during an interview with the public-radio station WNYC.

“There’s a very big age difference between us which I’m sure shocks a lot of people, and it startles me,” Taylor said. “But as they say, ‘If she dies, she dies.'”

She also opened up about the possibility of marriage in the future, saying, “I would not do that publicly. My relationship is with a woman, and I have not – given my generation it would not be something that would automatically occur to me. But she’s mentioned it because just from a spiritual point of view, from a heart point of view … as a deed that has a very rich symbolic gesture to it, it has its attraction.”

She didn’t reveal the name of her partner, but later that month Taylor posted a photo of Paulson in a gown on Twitter with the caption, “When captions fail … “ Bruce Glikas/FilmMagic/Getty ImagesSarah Paulson and Holland Taylor at the opening night of ‘Ripcord.’

Shortly after Entertainment Tonight broke the news that Paulson and Taylor were an item at the end of 2015, Paulson called her girlfriend her “favourite actress” on Twitter after watching her in a performance of “Ripcord” in Manhattan.

Less than a month later, she gushed that her partner was her “favourite human” in a birthday tweet. “Happiest Birthday to @HollandTaylor my most favourite human,” she wrote. “No one is more deeply grateful that you were born than I.”

December 2015: The couple was spotted attending the opening night of “School of Rock” on Broadway. Bruce Glikas/FilmMagic/Getty ImagesSarah Paulson and Holland Taylor at the opening night of ‘Fiddler on the Roof.’

Later in December, Paulson and Taylor made their public debut attending the opening night of the musical “School of Rock,” according to People.

Shortly after, they were spotted holding hands while watching a Broadway performance of “Fiddler on the Roof.”

January 2016: They made their red-carpet debut at the Critic’s Choice Awards. Paulson was nominated for best supporting actress in a limited series for her role on “American Horror Story: Hotel” at the 2016 Critic’s Choice Awards, where the couple made their red-carpet debut. DANNY MOLOSHOK/ReutersThe couple is open about their unconventional relationship.

In a 2016 interview with The New York Times, Paulson opened up about her relationship with Taylor for the first time.

“My choices in romantic partners have not been conventional, and therefore the idea that it’s ‘other’ makes it compelling,” Paulson told the publication. “If my life choices had to be predicted based on what was expected from me from a community on either side, that’s going to make me feel really straitjacketed, and I don’t want to feel that … what I can say absolutely is that I am in love, and that person happens to be Holland Taylor.”

The Emmy Award-winning actress also opened up about their age difference, and why it works for their relationship.

“I think there’s a greater appreciation of time and what you have together and what’s important, and it can make the little things seem very small,” Paulson said. “I can’t say it any other way than there’s a poignancy to it, and a heightened sense of time and the value of time.”

September 2016: Paulson made sure to give her girlfriend a shout-out at the Emmy Awards. According to Us Weekly, during a red-carpet interview with E! News, Paulson said, “Hi, Holland – Holland Taylor, if you’re watching, I love you.”

January 2017: Taylor gushed about her relationship with Paulson in a radio interview. KYLE GRILLOT/ReutersHolland Taylor told the world how much she loves Sarah Paulson.

In an interview on Sirius XM’s “Sandyland” with Sandra Bernhard,Taylor opened up about her relationship with Paulson.

“I’m the luckiest person in the world,” she said. “I can’t talk about my life today and not mention this wonderful love.”

She continued, “[The relationship] has to be part of what is the most wonderful thing in my life. The whole embrace of this wonderful relationship, which makes everything else makes sense.”

December 2017: Paulson commented on the public fascination with the couple’s 32-year age difference. 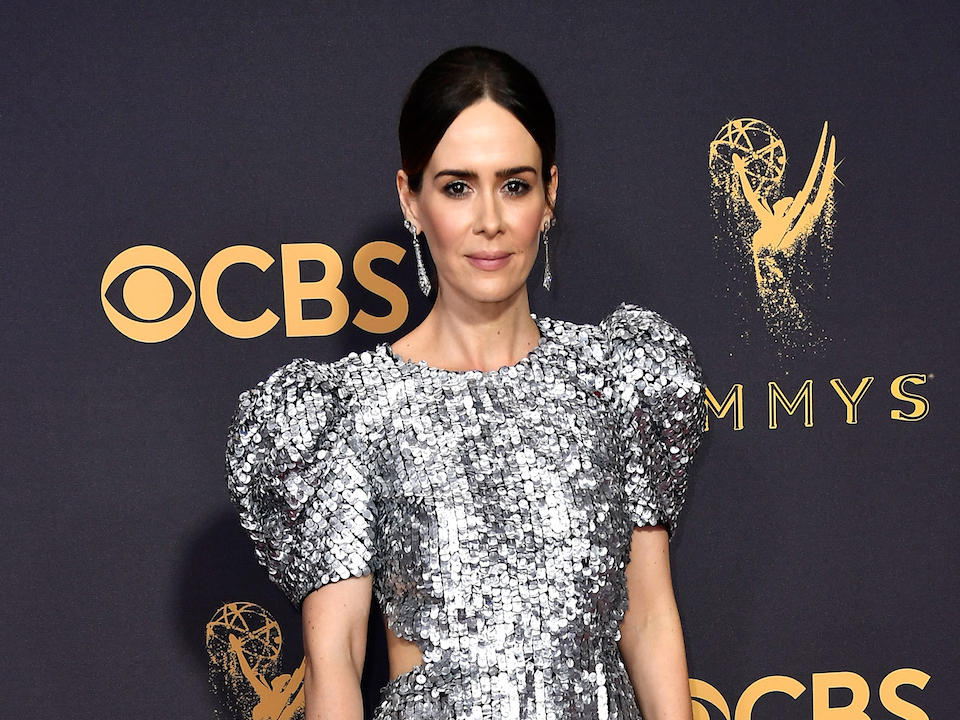 Frazer Harrison/Getty ImagesSarah Paulson said she doesn’t look to others for validation.

According to E! News, Paulson addressed the couple’s age difference in a 2017 interview with The Edit.

“I’m with a much older person and people find that totally fascinating and odd, and, to me, it’s the least interesting thing about me,” she said. “I am a woman of a certain age who chose not to have children, and who has made my career my priority. I am the captain of my own ship, and I’ve never looked to anyone else to validate that, or tell me it’s OK.”

January 2018: She further delved into the topic of their age difference during an interview with Town and Country. In the interview with the magazine, Paulson was asked again to discuss being in a relationship with an older woman.

“I do not want to be defined by who I share my bed, my home, my soul with,” she said. “My choices in life have been unconventional, and that’s my business.”

However, she admitted that she hoped that having her relationship in the public eye would help erase some of the stigmas around age differences in relationships.

“I do want to live responsibly and truthfully without hiding. It’s complicated, because there is a lot of hate in this world, and a lot of good can come from quote-unquote normalizing something for people who don’t see it as normal,” she said. “Our relationship represents a certain amount of hope and risk. Maybe there’s something brave in it. Maybe it encourages others to make brave choices. What else can I say? We love each other.”

March 2018: Taylor admitted that she’d been “blindsided” by the public attention her relationship brought. 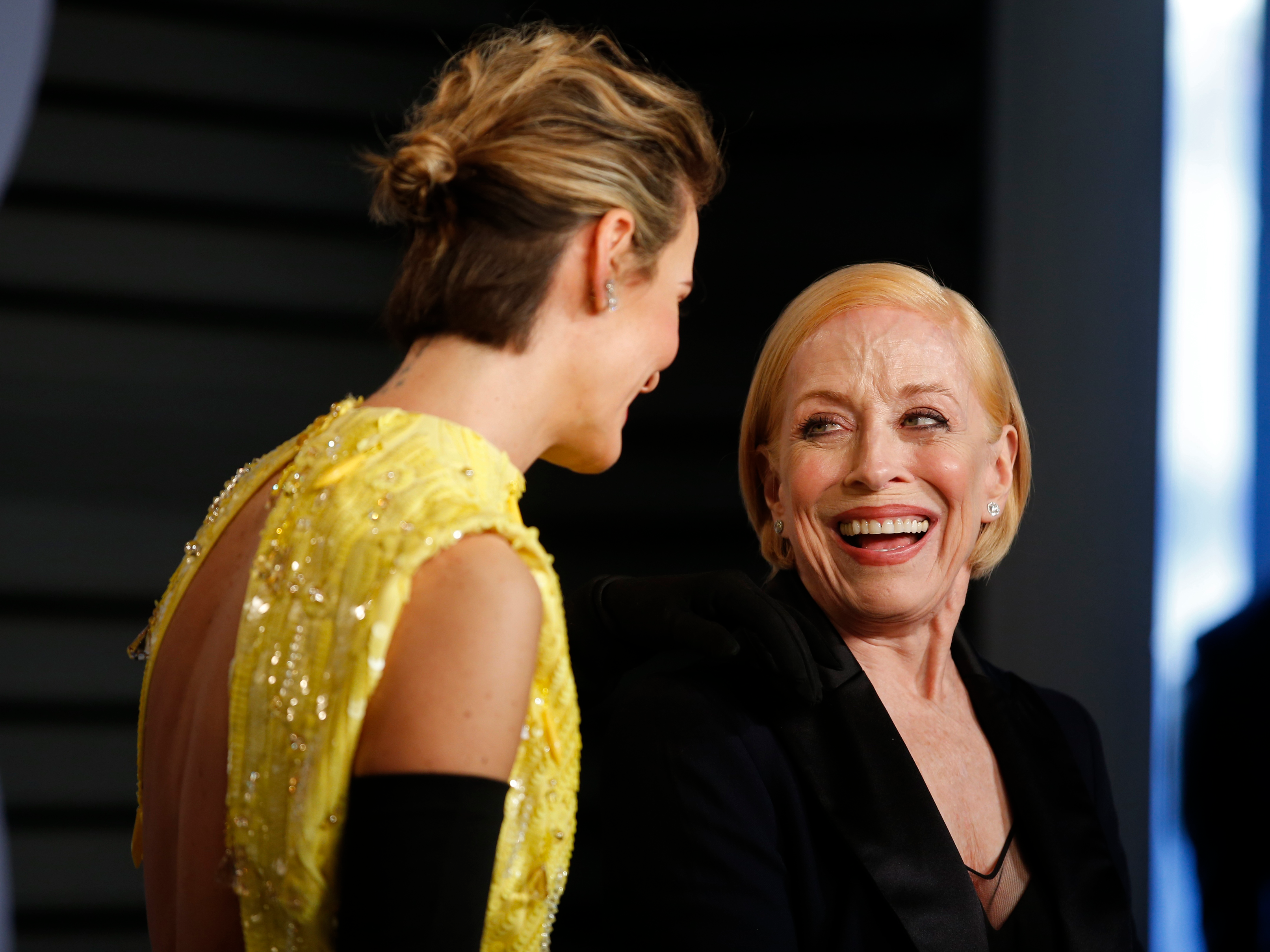 DANNY MOLOSHOK/ReutersSarah Paulson and Holland Taylor had different reactions to the attention.

In an interview with InStyle, Taylor opened up about dealing with the public attention surrounding her relationship with Paulson.

“I was blindsided by the reaction to it,” she told the publication. “I’m from an older generation and for me it’s quite surprising how people talk about personal things of any kind in the press. It’s not natural to me. That doesn’t mean it’s not good, it’s just taken some adjusting.”

She continued, “And Sarah, of course, is from a different generation, she’s very much of today. It was hard for me at first to go through that membrane of being a private person. But it’s been good for me to do it in such a lovely way.”

October 2018: Paulson said that she hoped that her unconventional relationship could inspire others to follow their hearts. 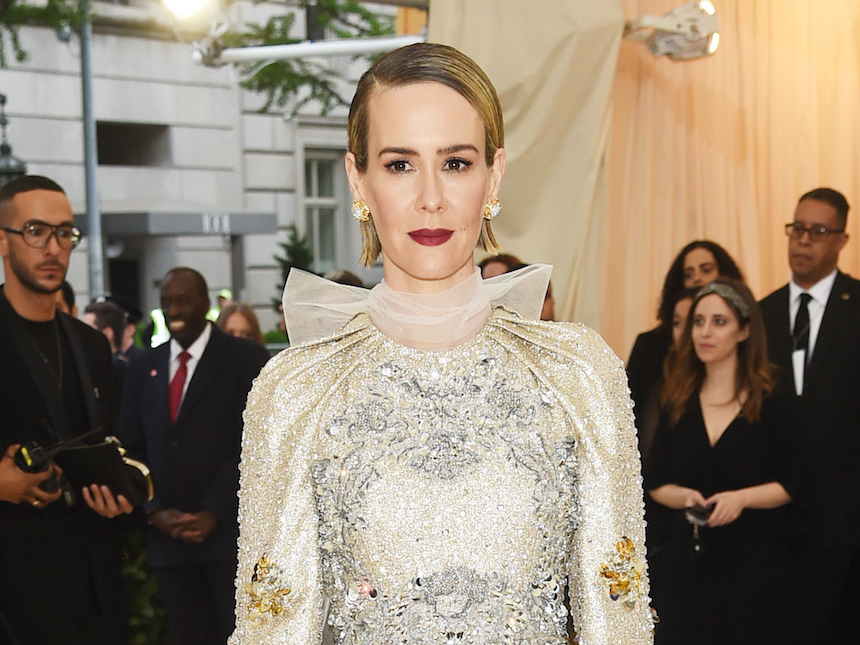 In a 2018 interview with Elle magazine, Paulson spoke about how she hopes that her relationship with Taylor can be an inspiration to others.

“I didn’t choose to fall in love with the person I fell in love with. But I think why it’s interesting to people is that on paper, it’s unconventional,” she told the publication. “For a person who might find themselves in a situation that they fear will be misperceived or judged, maybe they could see me living my life in a way that is authentic to me – just trying to be as real as possible.”

She concluded, “If that inspires anybody else, that can’t be a bad thing.”

January 2019: Paulson and Taylor rang in the new year together. 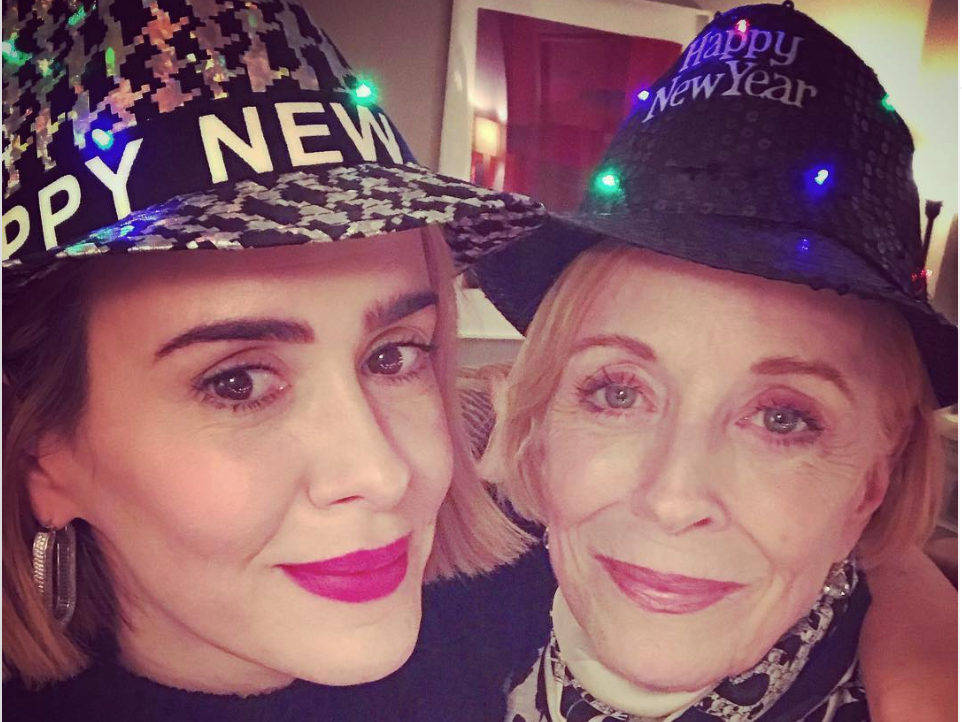 mssarahcatharinepaulson/InstagramSarah Paulson and Holland Taylor on New Year’s Eve in 2019.

Paulson posted a photo on Instagram of the couple in their party hats with the caption, “The only one.”

September 2019: Taylor spoke fondly of Paulson in a TV interview. 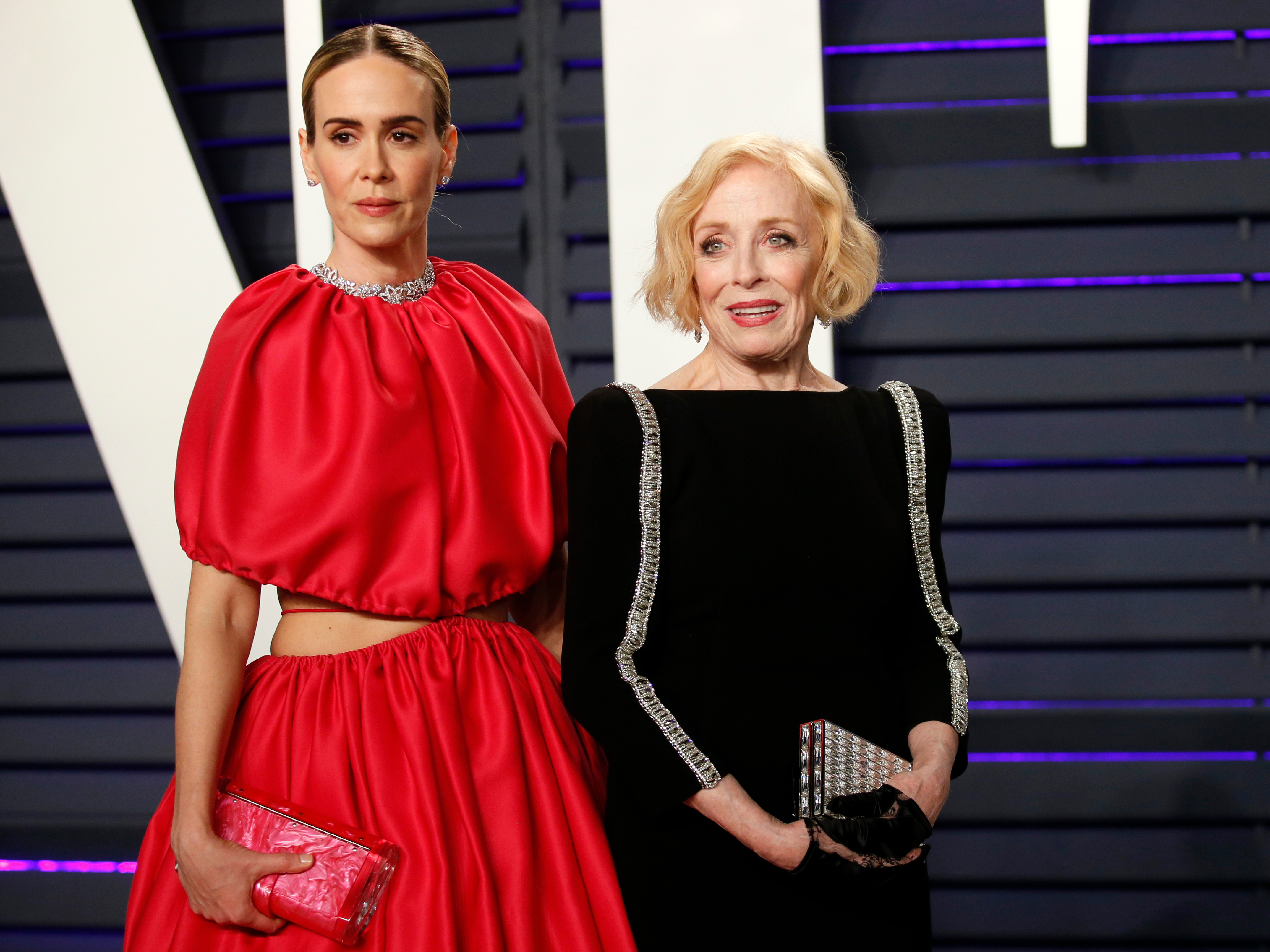 Danny Moloshok/ReutersSarah Paulson and Holland Taylor are both actresses.

Taylor did an interview with Fox 11 LA to promote the Global Truth Centre’s “The Inner Truth” event in 2019.

When asked to describe her relationship with Paulson, Taylor said, “She’s really a person of such variety it’s hard to describe her, and this is one reason why she’s a great actor.”

She continued, “We’re not alike as actors. She’s a chameleon … She’s just a profoundly gifted performer.”

January 25, 2020: Taylor said Paulson was “brave” to be in their relationship. In a January interview with Us Weekly, Taylor said that “it’s kind of a mystery” to her why Paulson is still with her.

“I’m surprised by Sarah. I mean, that we love each other and respond to each other this way is not the surprise, but that she would make a commitment like this and that she would share her life with me is a constant surprise every day really,” she said.

She continued saying that Paulson is “at the centre of her life.”

“A big age span is a challenge to any relationship. And she’s just very brave. She’s very brave and she is very truthful and she’s going to live her truth. And so I basically am following her lead and I’m blessed,” she said.

September 22, 2020: Paulson told Roxane Gay that she shuts down any negative and “ageist” comments about Taylor. 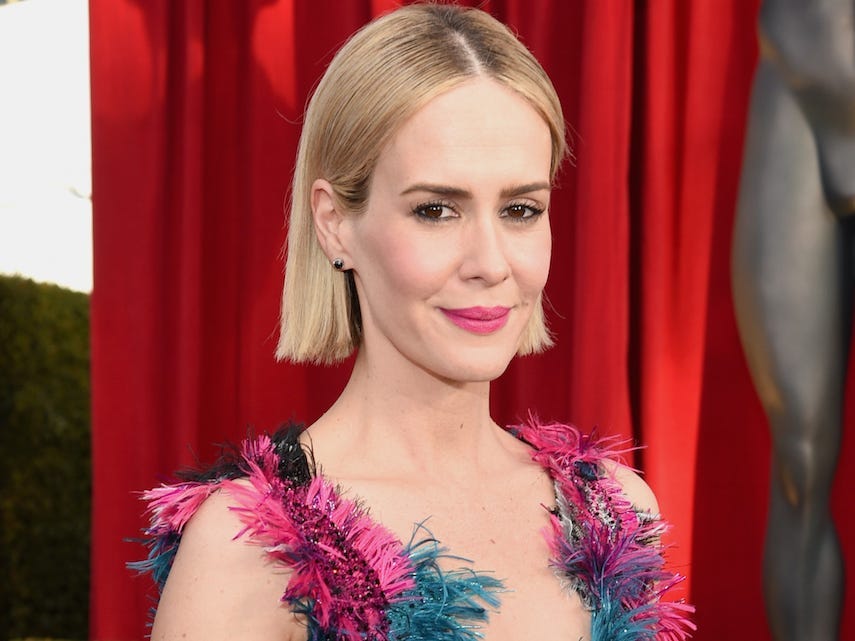 A few days after the couple “attended” the virtual 2020 Emmy Awards together, Harper’s Bazaar published an interview between renowned writer Roxane Gay and Paulson – during which they discussed the public’s fascination with Paulson and Holland’s age gap.

The actress said that she thinks it steams from our natural inclination to avoid thinking about mortality and “our own ageist thinking and the idea that to be old is to cease to have any desire.”

Although Paulson said that most of the public’s reactions to her relationship are positive, she has no patience for unsolicited negative feedback about her partner.

“Anybody says anything about any person I love in a way that is disrespectful or cruel and I want to cut a b—-,” she said.