Counter to many rumours floating around Sarah Palin has neither deleted her ‘Don’t Retreat, Reload’ tweet nor the Facebook notes it links to that includes the infamous gun sights map.

However, it appears her staff spent much of the weekend in a race to keep negative comments off her Facebook page following the shooting of Rep. Giffords.

A blogger calling themself ‘Obama London’ kept a sharp eye on Palin’s Facebook page on Sunday and noted that just a minute or two after even a remotely negative comment went up it was quickly deleted.

A comment that simple says, “hypocrite” – presumably in reference to Palin at 17:28 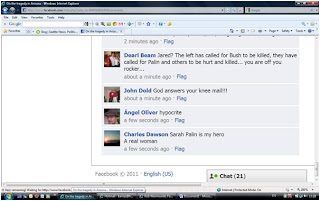 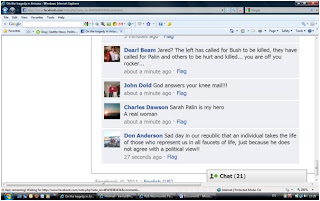 Many of the comments ‘Obama London’ grabbed were somewhat more extreme, but only a few (that she saw anyway) could be called over the top.  All were removed within a minute two.  And a quick scroll through the comments thread suggests they were successful…as it reads now it’s a fairly consistent chain of Palin support.

Nevertheless, between this scrubbing, the scrubbing of her ‘Take Back the 20’ website and SarahPac head Rebecca Mansour’s harsh defence of the gun sights map, Palin is clearly doing her best to digitally distance herself from Saturday’s shootings.  Understandably so.

However, this is harder to excuse.  Shortly after 6pm (London time) a comment went up criticising nine-year-old Christina Taylor who was killed Saturday.  Yes.

“It’s ok. Christina Taylor Green was probably going to end up a left wing bleeding heart liberal anyway. Hey, as ‘they’ say, what would you do if you had the chance to kill Hitler as a kid? Exactly.”

That comment, which I can no longer find, stayed up for a long while (as documented by Obama London), while ones critical of Palin were quickly removed.

Anyone who spends time on the Internet knows people say terrible things in comments section.  The fact this one wasn’t as quickly removed as the other far less offensive Palin-aimed remarks were, however, simply raises further questions about Palin’s judgment.

They also apparently have no problem leaving up comments such as this:

***********IMPORTANT***** **** Sarah, I have a screen shot of the AZ shooter’s FB page BEFORE it was taken off. It shows direct affiliation with Obama (he used his picture as his wall pic) and his adoration of Che, Saul Alisnky, Chavez and other fascists. If you wish, I will send it to you. This cannot be hidden at your cost.

You can read ‘Obama London’s full post here as well as view all his screengrabs.