The walls of a bar in Georgia were decorated with dollar bills. The owners spent 3 days taking them down to give to unemployed staffers and ended up with $3,714. 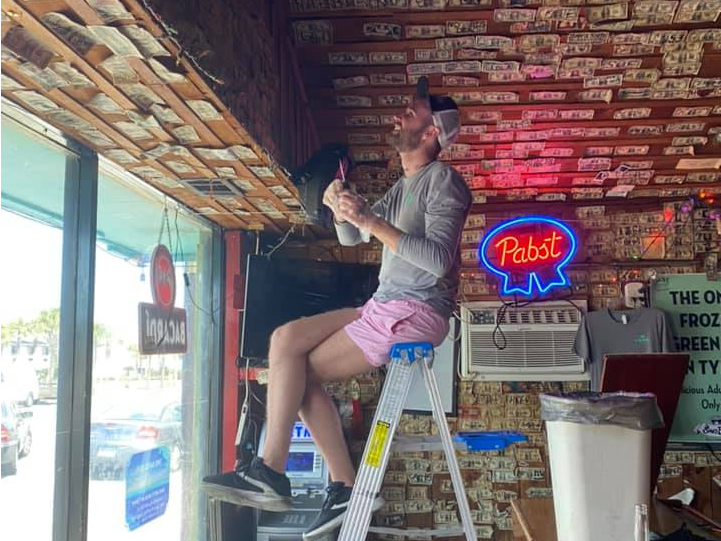 Jennifer KnoxVolunteers worked to get the money down.

Jennifer Knox’s bar on Tybee Island in Georgia is known as the “dollar-bill bar” because for years customers have been writing notes on singles and stapling them to the walls and ceilings.

Late last month, along with all nonessential businesses on the island, The Sand Bar had to close its doors, and Knox was crushed knowing that many of her staff members would struggle to get by without their income.

Sitting in the bar having a beer after the doors were locked, Knox and several of the bar’s board members had an idea to put the money that had been accumulating for years to good use.

“It just hit us,” Knox told Insider. “We have money on the walls, we have time on our hands, and we have people who need money.”

For the next 3 1/2 days, five volunteers worked nonstop pulling dozens of staples out of each bill. Knox said people were on ladders for hours, trying to save each bill.

“I still have staples on my shoes,” Knox said. 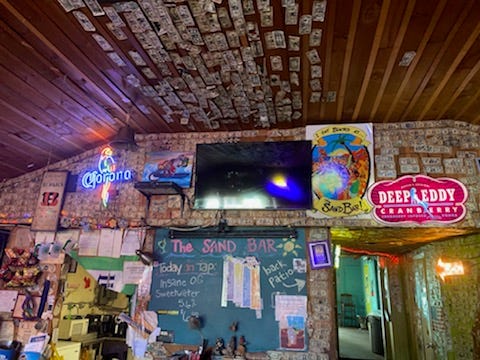 Jennifer KnoxIt took more than three days to remove the dollars from the walls and ceilings of a Georgia bar.

There was nearly $US4,000 on the walls and ceiling of the bar

In the end, the group salvaged $US3,714 in small bills. Knox took the bills to the bank in a Hornitos tequila box to exchange them for fresh ones.

Then Knox drove to the homes of her four bartenders and two musicians and gave them $US600 each.

“It was so emotional and beautiful,” Knox said. “We couldn’t hug them, which absolutely sucked, but they were just crying.”

Tybee, a 3-mile island off Savannah, has been hit hard by the coronavirus lockdowns. Many residents work in the service industry, and St. Patrick’s Day tends to be the start of the busy season, Knox’s mother, Pam Hessler, told Insider.

While removing the bills required “blood, sweat, and tears,” Hessler and Knox said they enjoyed reading the messages of love left on each bill over the past decade.

Some people had been celebrating weddings or birthdays. Others were messages left by soldiers, Hessler said.

Knox, who bought the bar in 2014 after bartending there for seven years, said she had never been particularly fond of customers climbing all over to leave the bills on the walls.

“You had the drunk girls wanting the staple guns or the markers,” she joked. “I was never a fan of the dollars on the walls. I’d rather it be in my register or the tip jar.”

Now that they have been used to offer some help to her struggling staff, she’s grateful to the people who left them behind.

“I’m thankful for all of the people who did donate,” Knox said. “Every dollar had a hundred staples. If it wasn’t for the people who left their dollars behind, and the people who volunteered [to remove them] we wouldn’t be here.”

After garnering attention, The Sand Bar is raising even more money

When a local news station called Knox to do the first story about their effort, she “nearly passed out,” she said.

The story has since been shared around the country, and people who Knox and her mother hadn’t heard from in years have been reaching out.

The bar has since set up a Venmo account to raise more money for not just its employees but other struggling service-industry workers on the island. Hessler said it has raised $US2,000 in two weeks.

“It’s so exciting because we know so many other people on the island are not working. They’re just completely down. They have no way to pay their rent or buy their food,” Knox said. “I just want to drive around all day and give people money.”