Houseboat residents are sheltering in place on their docks, holding float-up concerts in the middle of the water and boating out onto the San Francisco Bay. Here's how they're living through the pandemic. 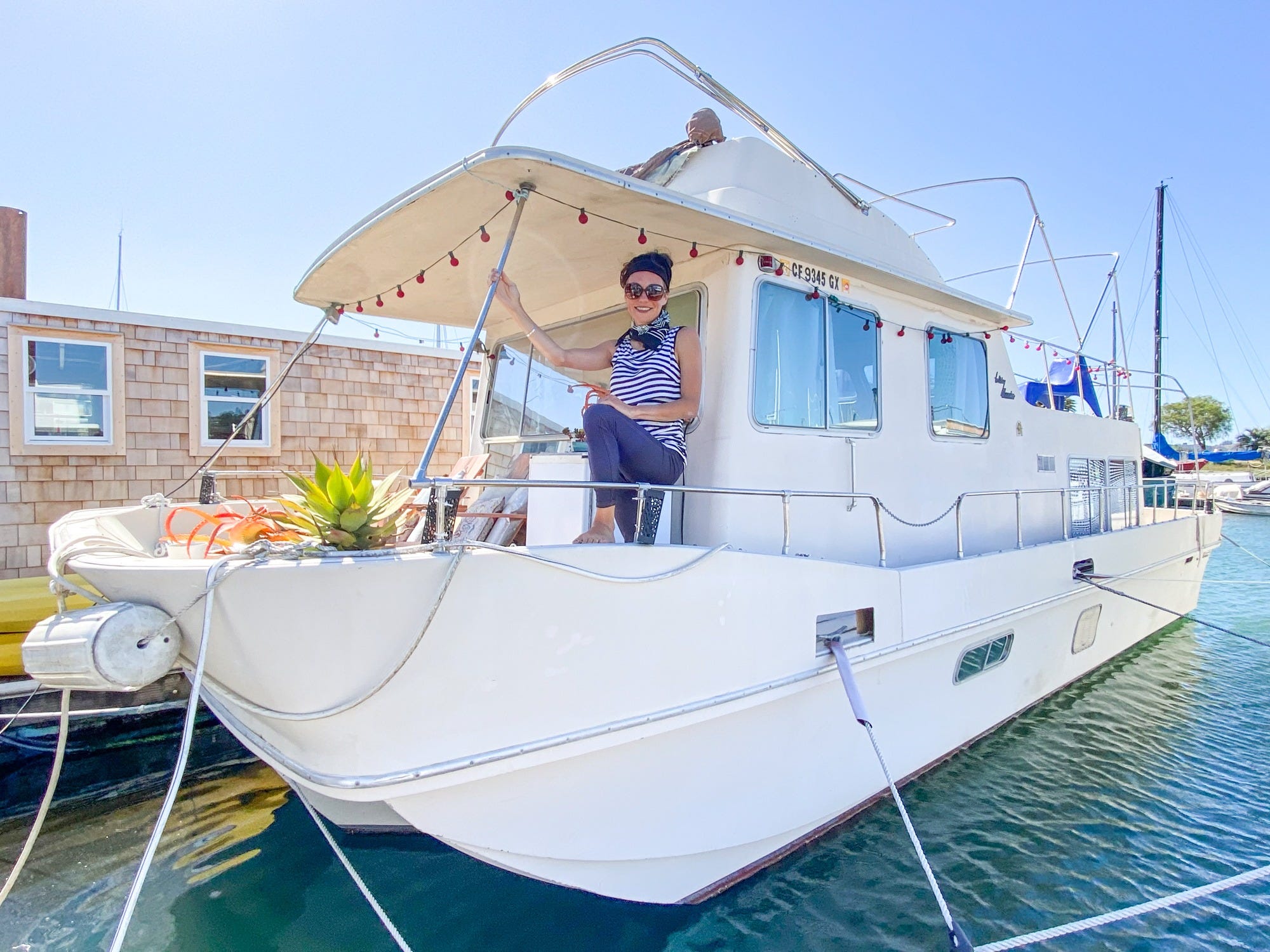 When the San Francisco Bay Area shelter-in-place order went into effect on March 17, houseboat resident Amy Heiden thought one thing: “We have the best-possible-case scenario,” she told Business Insider.

She lives on a houseboat with her partner just northeast of San Francisco and has spent the last two months living life as usual, for the most part.

So has Raylene Gorum, a resident in a Sausalito houseboat community just north of San Francisco.

“You get community, you get stars, you get this fresh air, you get decks and parties, which is great, except that you can’t want to have space or things,” Gorum told Business Insider. “Those are the two limitations.”

Living on a boat may come with small confines, but that also means having the beautiful bay as a backyard, which can come in handy when the pandemic and stay-at-home order-induced cabin fever begins to creep in.

Here’s how houseboat residents are faring during the pandemic – from holding socially distanced float-up concerts on kayaks in the middle of the water to excursions out into the bay – as thousands continue to shelter in place.

Heiden has lived on her motor yacht for a year and a half. 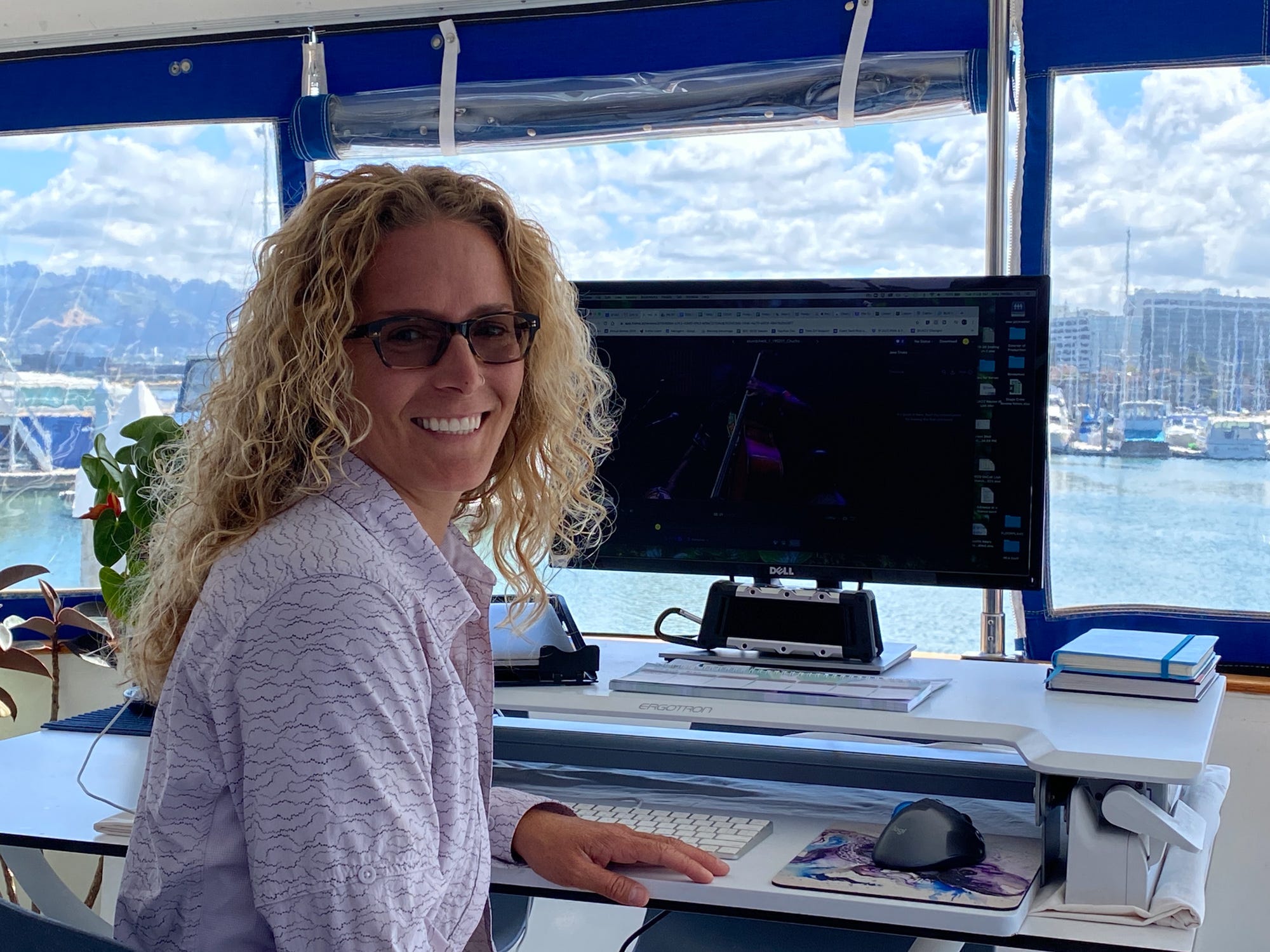 Amy HeidenHeiden at her boat desk setup in Emeryville.

She works at SF Jazz, a not-for-profit organisation coordinating events at a music venue in San Francisco’s Hayes Valley neighbourhood. She would usually take the Emery Go-Round shuttle and then BART into the city until offices closed.

As many workers have pivoted to remote work, they have also had to carve out workspaces in their homes, a challenge for Heiden who said she didn’t have a lot of extra space to set up a home office on her boat. But she made do.

“We kind of immediately thought if we have to shelter in place, this is the place that we’re happy to be sheltering,” Heiden said.

She told Business Insider that she’s always been a lover of the water. But it’s also “a nice alternative way to have a lifestyle in the Bay Area.” 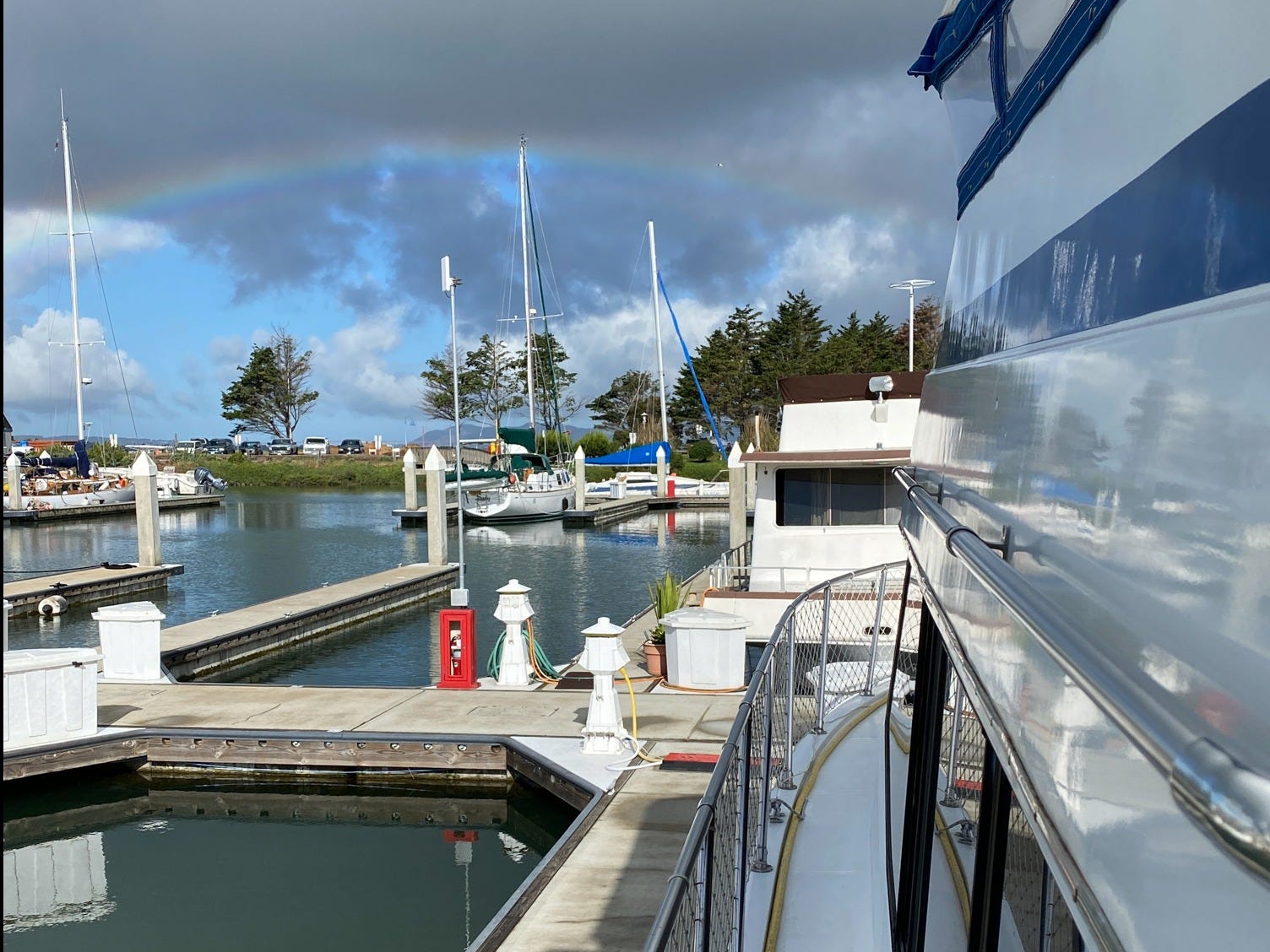 Amy HeidenA rainbow is seen from Heiden’s deck in Emeryville.

People have turned to living full-time on houseboats as “liveaboards” in recent years specifically to escape the soaring housing costs that come with the Bay Area, as The Wall Street Journal reported in May 2019.

But houseboat communities also have a place in the region’s long history, especially in Sausalito where artists, writers, and musicians have long flocked in search of an alternative lifestyle as SF Gate reports.

Heiden lives on this motor yacht with her partner. 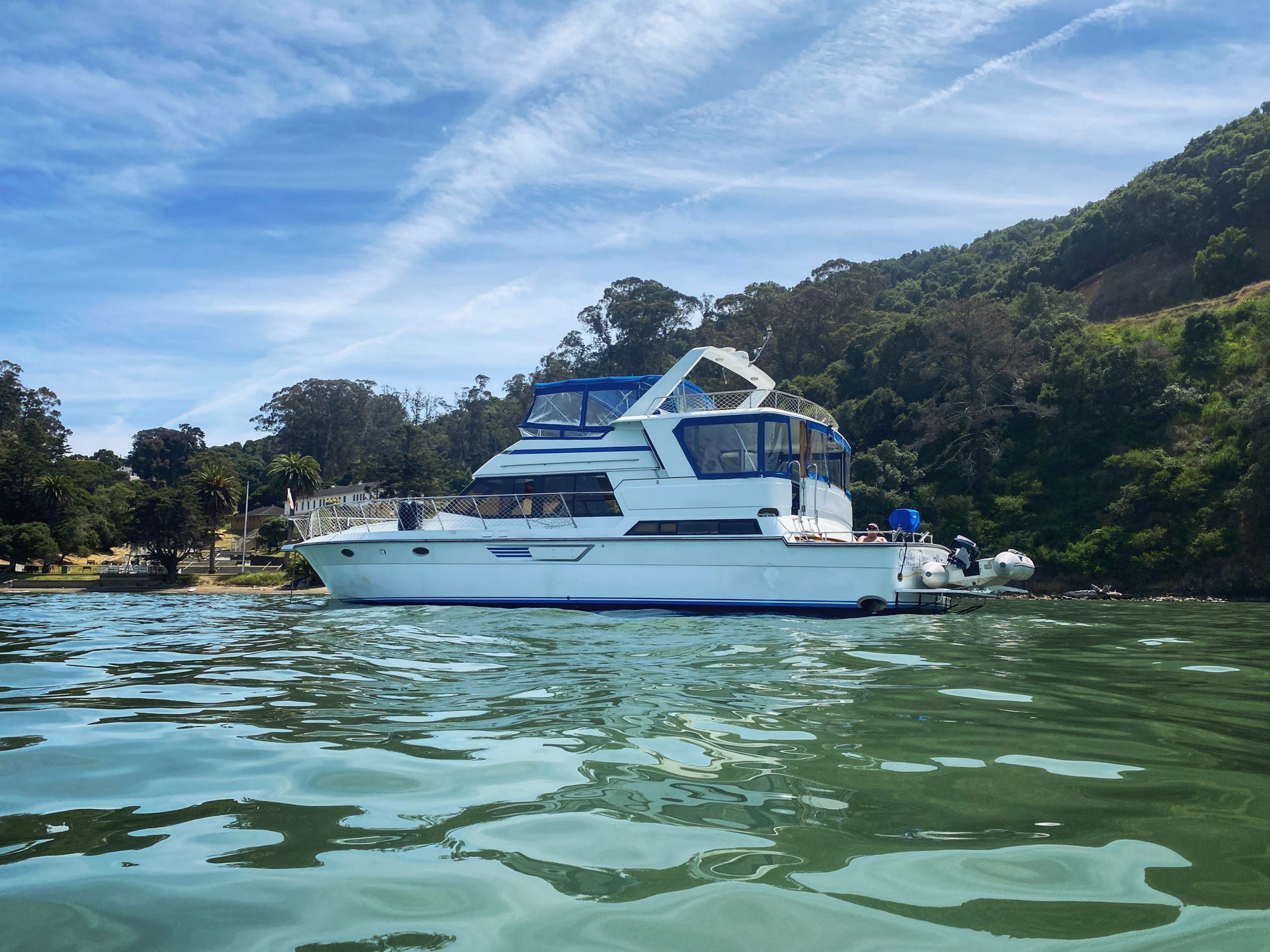 Amy HeidenHeiden’s motor yacht near Angel Island during an excursion one day.

When the shelter-in-place order was issued first in the region, officials announced that residents would be allowed to swim in the ocean. You’ll find some doing just that in areas around the bay, including Aquatic Park near Fisherman’s Wharf.

Boats are also allowed to go out, as long as occupants are from the same household.

A few weeks ago, they took the boat to Angel Island, a landmass near their marina and within sight from San Francisco. 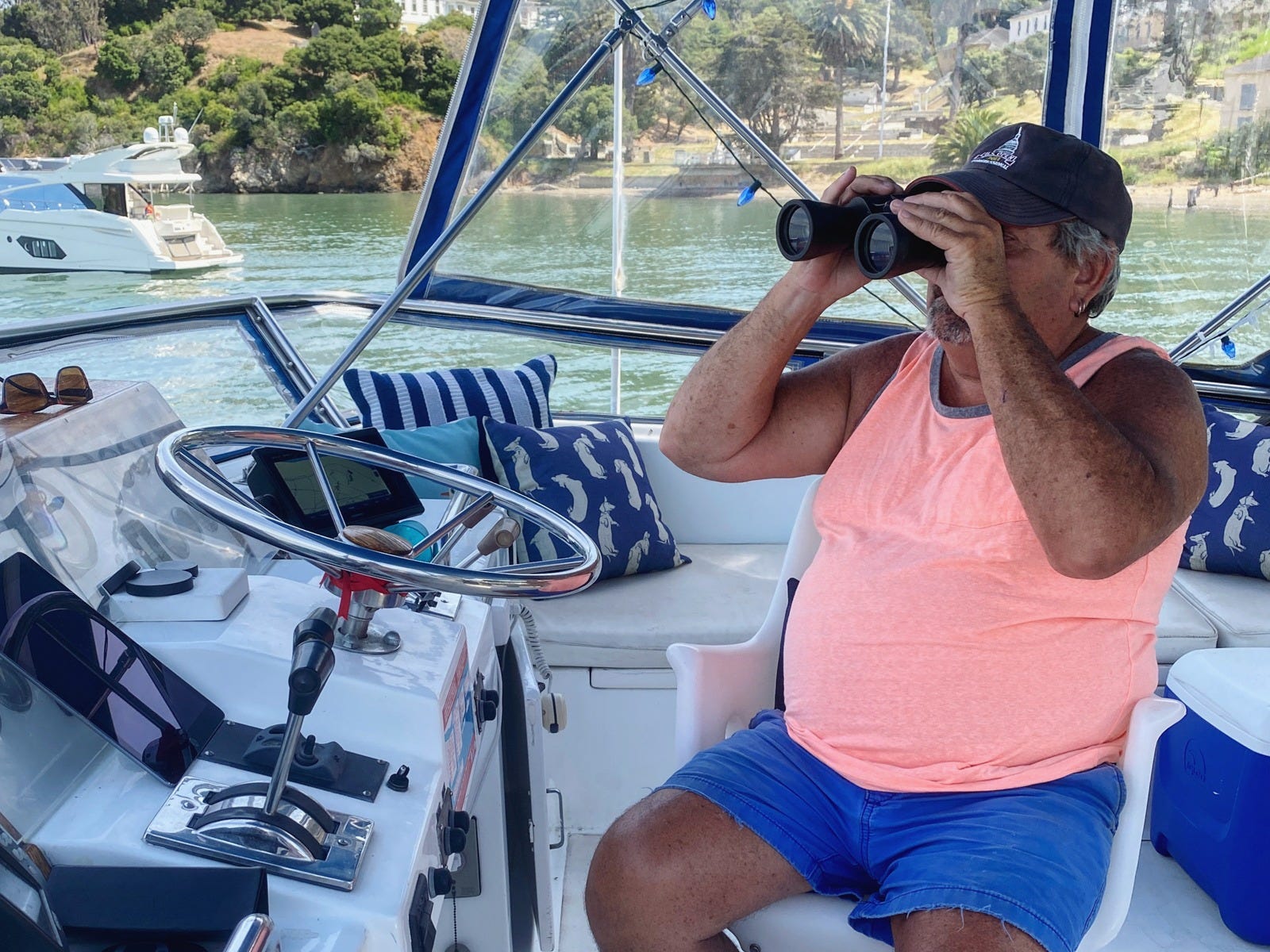 They have been out like that twice since all of this started. She said they would be going out more if not for their engine, which is in less than optimal condition.

She even has some live-aboard friends who are boating and anchoring out for a night or two in designated areas and then returning to their slips.

Raylene Gorum lives on this split-level houseboat, but she’s more stuck to her slip than Heiden is — her home has a shallow draft and isn’t built for going out onto the water.

The term “houseboat” is generally used to broadly define a boat that is used as a home, but Gorum said the terminology is more nuanced than people think. 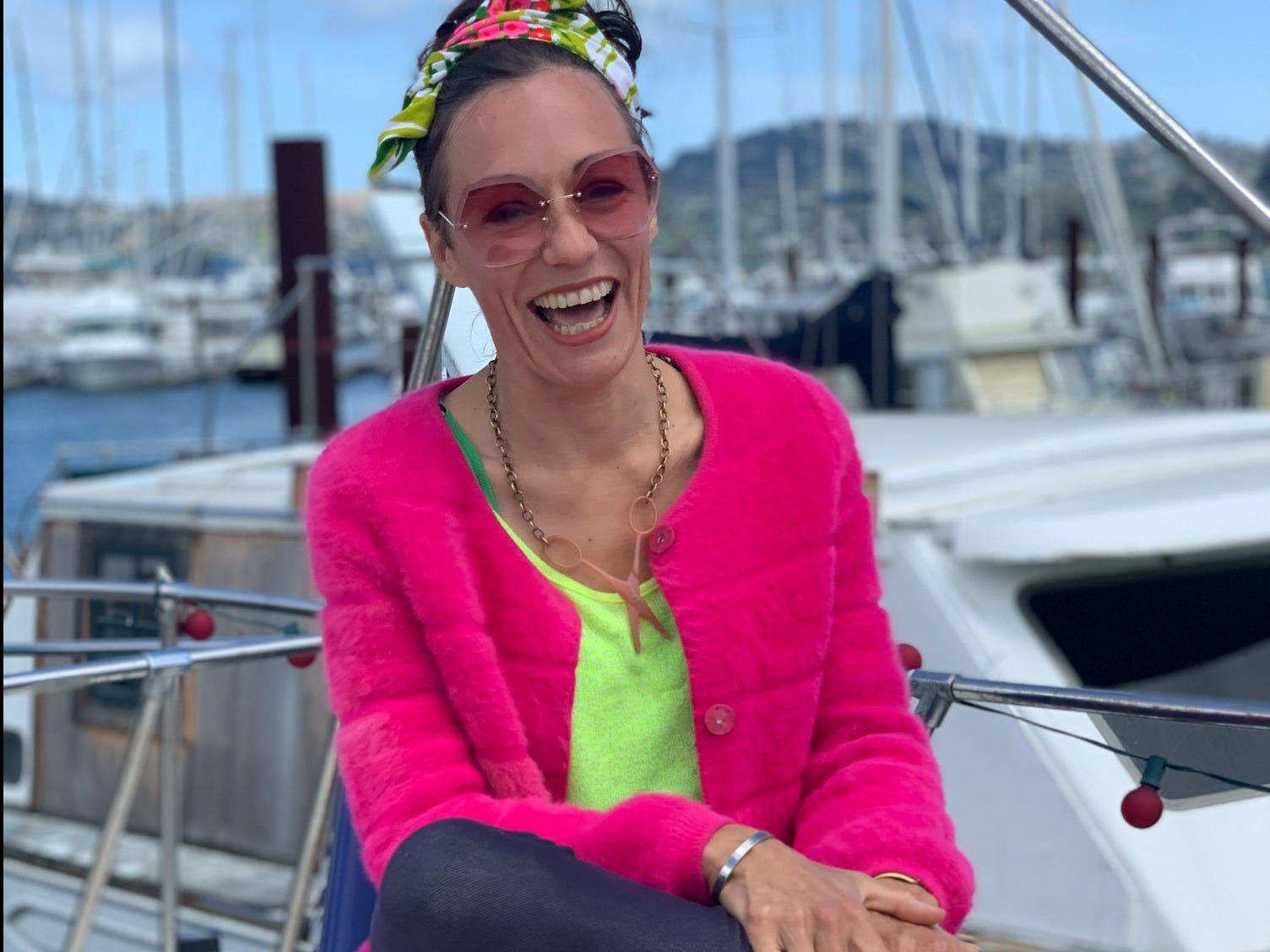 Raylene GorumGorum on her Sausalito houseboat.

For example, there are technically differences between boats, houseboats, and floating homes.

There are sailboats and Delta boats – usually used for fishing or trawling – and the like that serve as homes but can still operate as seafaring vessels, able to “anchor up” and go anywhere.

Heiden’s motor yacht, for example, is more like a boat than a houseboat, built to withstand the seas rather than simply serve as a home.

And then there’s a floating home, which is what most loosely resembles a landbound single-family home. The home has a floating foundation, which may be made of concrete in some cases, but it’s usually semi-permanently moored in any given location. They’re not built for navigating the water.

The bulk of a house boater’s monthly costs is the slip fee, which is usually based on boat footage and costs hundreds of dollars. 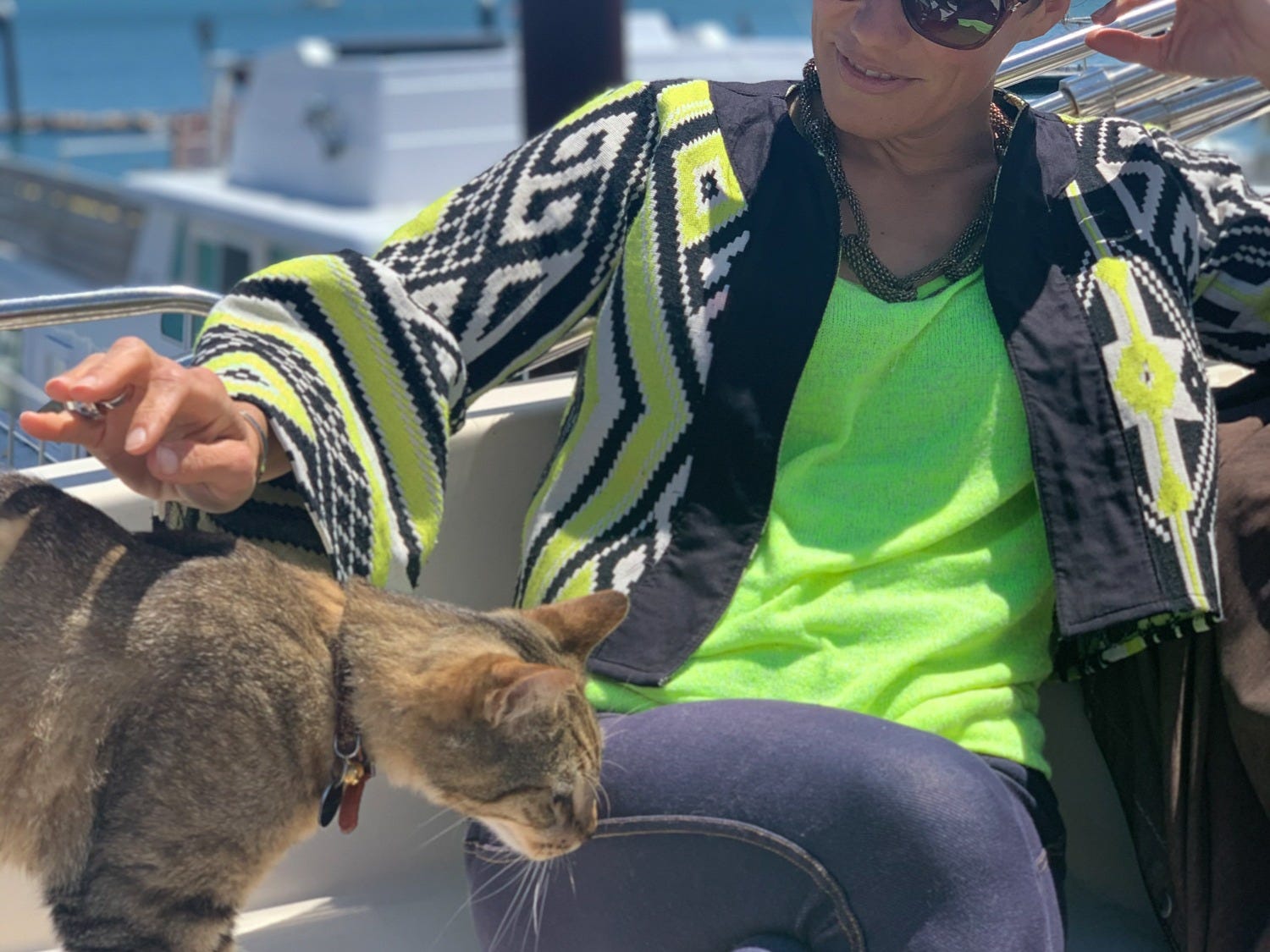 Raylene GorumGorum in her Sausalito community.

Then depending on how much you use it – and if your boat is even fit to leave the slip and navigate the ocean – there’s the cost for the fuel of the boat.

There are about 40 marinas in the Bay Area according to Boating SF, some that allow houseboat residents to stay overnight and some that don’t. Many have their own unique cultures and community. 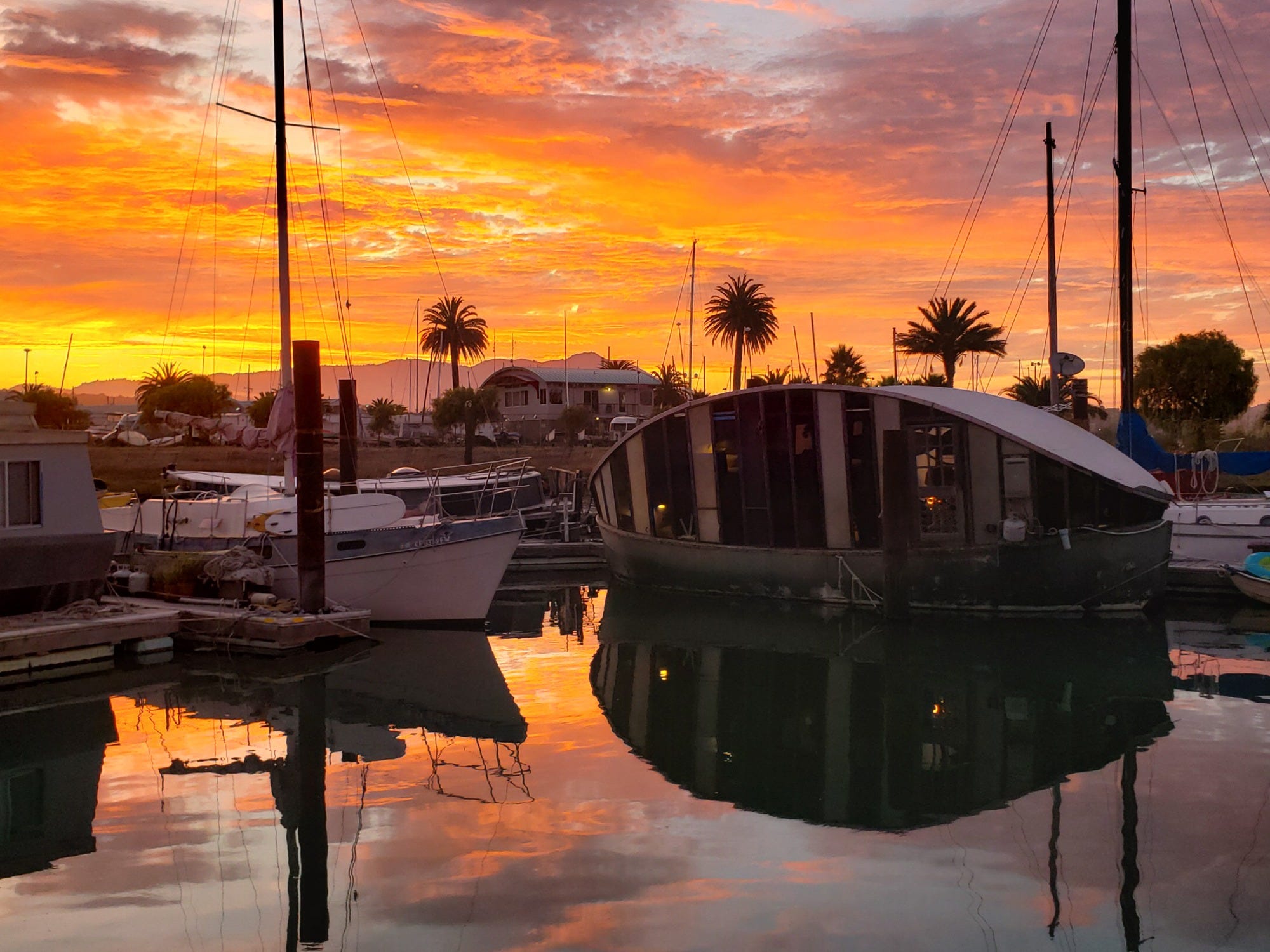 Raylene GorumA view of the sunset in Gorum’s houseboat community in Sausalito.

One of the region’s marinas is Galilee Harbour, a co-op nestled in the quaint town of Sausalito just north of San Francisco across the Golden Gate Bridge. 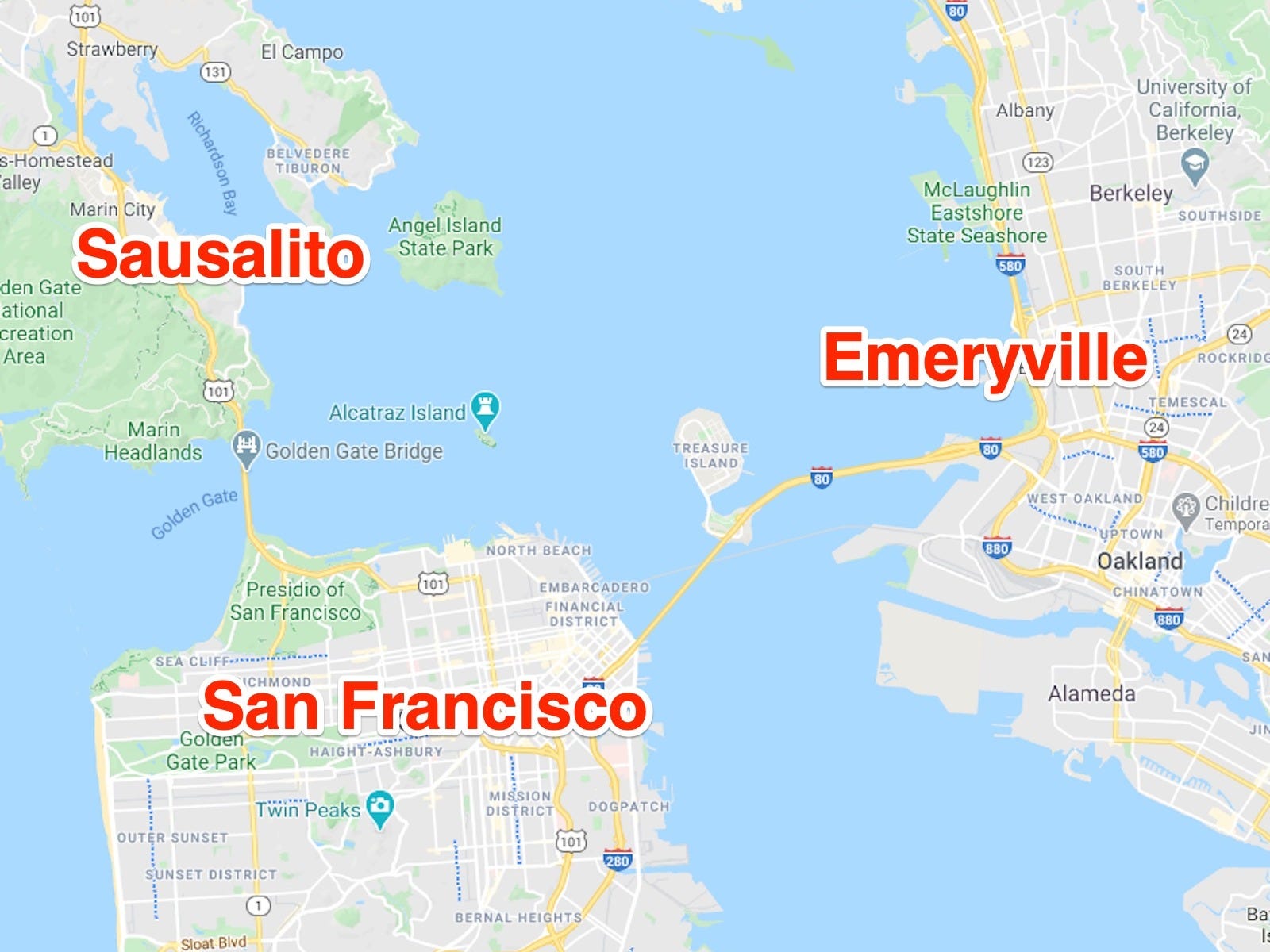 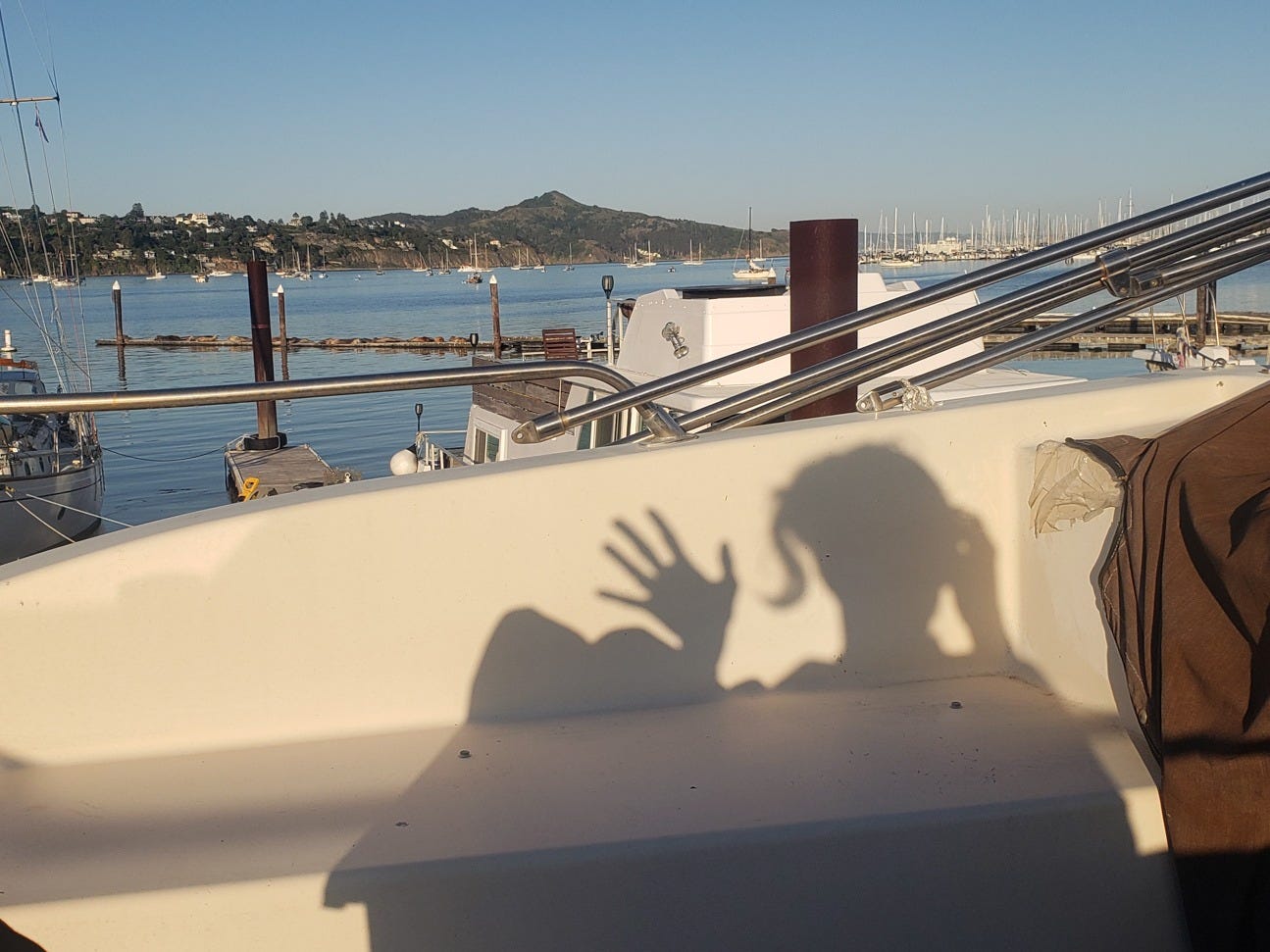 Raylene GorumGorum on her boat in Sausalito.

The community is made up of maritime workers and artists, with 85% of residents designated as low-income. It’s different from other harbours in that it’s 100% live-aboard.

That means that all 70 people in the community live on their boats full-time. There’s a wide age range, but Gorum said the demographic skews older, with lots of retirees.

It’s more affordable than other harbours in the region, and residents here pay part of their monthly rent through work hours within the community to keep the co-op up and running. 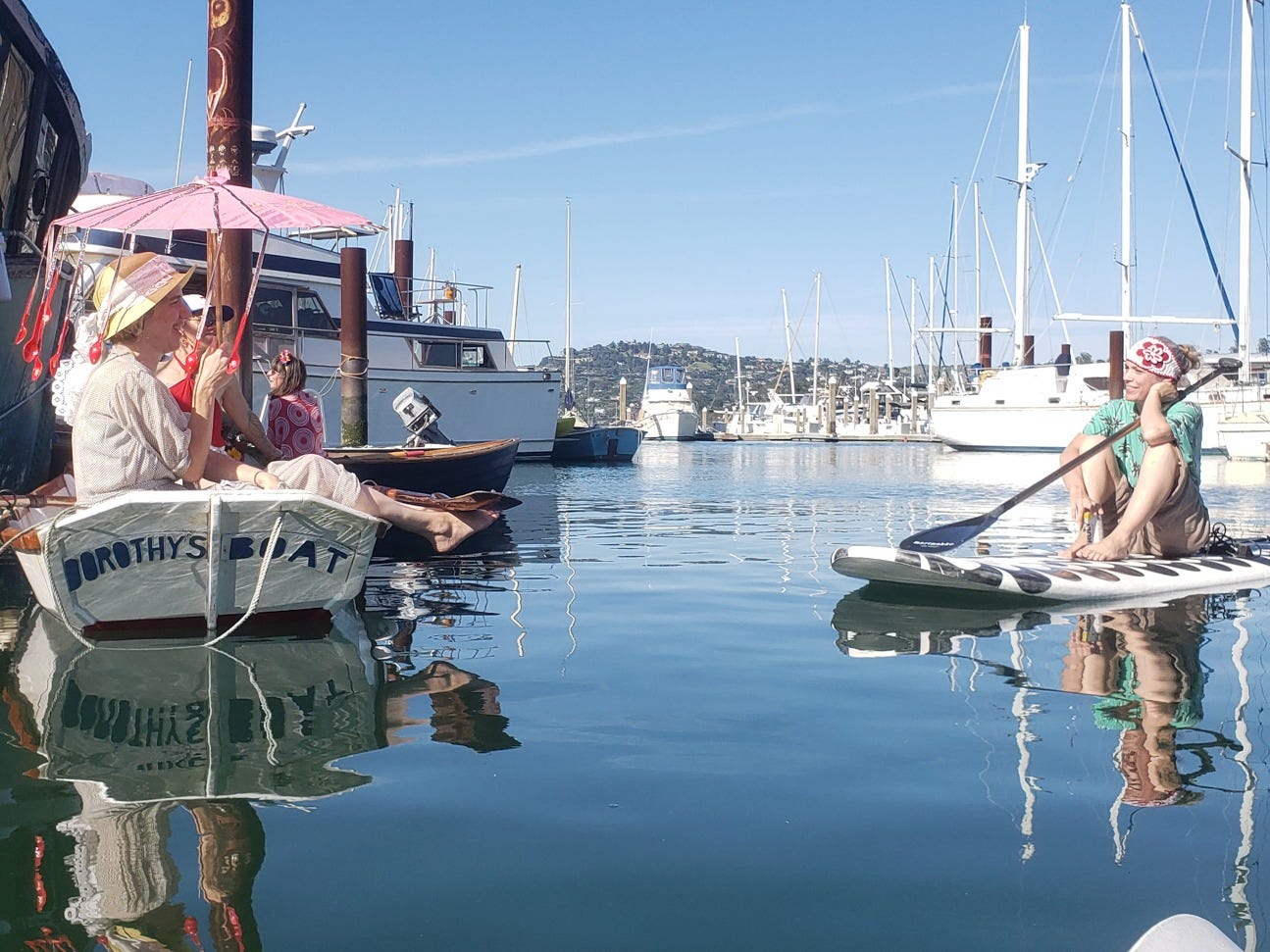 Raylene GorumResidents chat on the water in the community.

Some of the residents are ferry captains or charter operators, pillars of the travel and tourism industries that have frozen during the pandemic.

And everyone living here is tied to each other — literally. 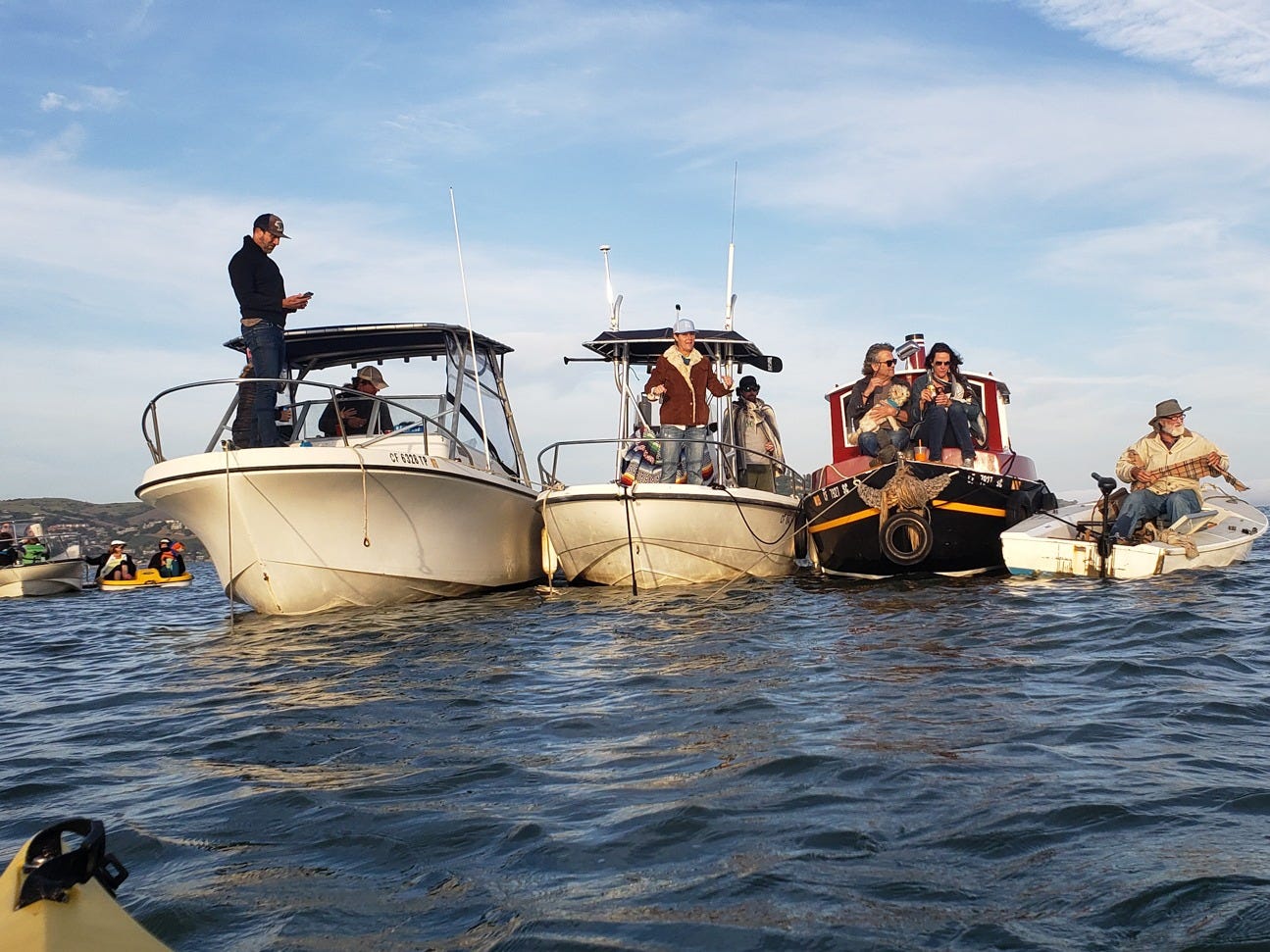 Raylene GorumResidents out on the water, not necessarily on their houseboats.

“Everyone’s lines are eventually tied to everybody else’s, and as storms move through, we all move through that kind of thing together,” Gorum said.

There’s more consideration of each other as a result. And even if it weren’t for that fact, Gorum said as a community, they look out for each other.

“We all kind of have that same experience,” Gorum said.

For Heiden, who lives in Emeryville Marina just across the bay from San Francisco, she said there are five or so boats in the vicinity whose owners also live aboard their vessels. Other folks merely come out to work on their boats from time to time.

But Gorum’s closest neighbour is spaced 12 feet from her. 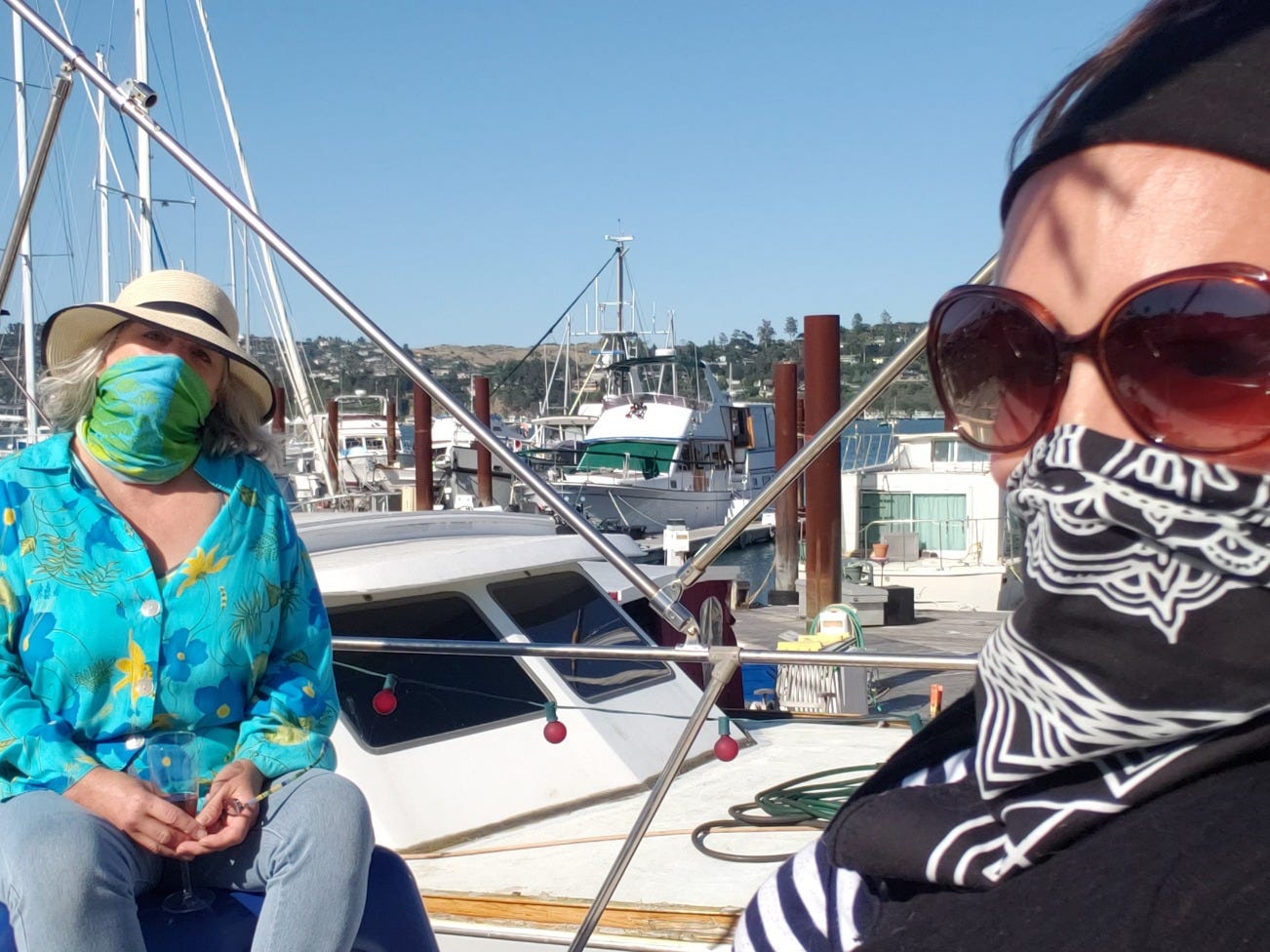 Raylene GorumGorum and a neighbour chat wearing face coverings in their Sausalito community.

“We may not have a lot of space on our floating homes, but you have a lot of outdoor space,” Gorum said. “A lot of us have decks, which are good for very distant conversations with neighbours.”

That closeness can make things tricky while navigating a public health crisis where personal space is crucial, as SF Gate’s Madeline Wells reports.

Gorum said you’re in constant contact with neighbours, passing them daily on the dock. 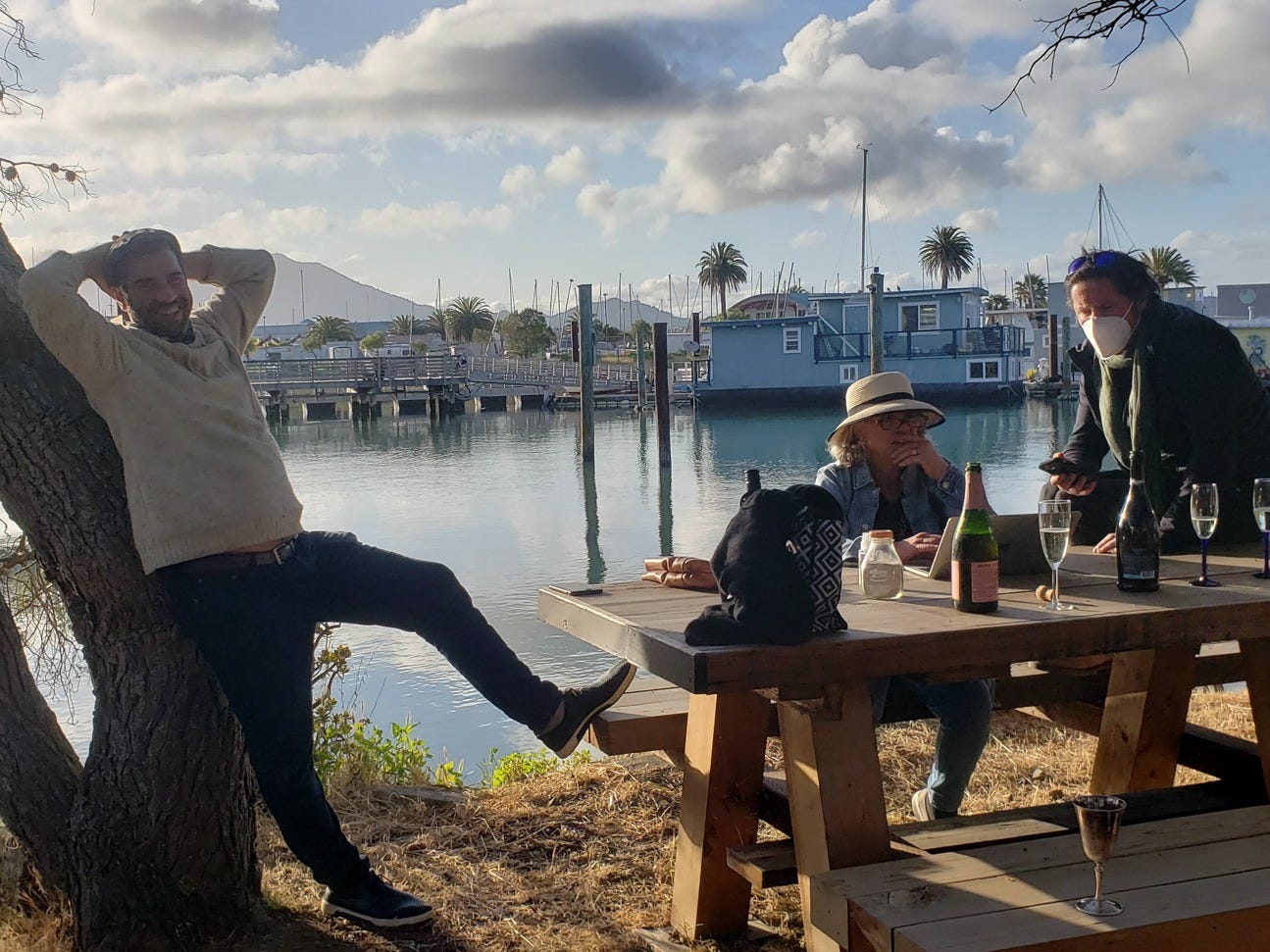 Raylene GorumResidents lounge on land in their community.

They try to minimise contact, and everyone wears masks, Gorum said.

They’re also being cautious about outsiders coming in. Harbours like this have shut off access to the public, as SF Gate reports.

“We’ve limited other guests, and tourists used to come through our neighbourhood all the time, and that’s just not happening right now,” Gorum said.

There are shared bathroom and laundry facilities on land in the co-op, so residents have had to come up with a schedule to avoid overlap. Gorum said spending time doing laundry with others used to be a nice time to catch up with each other, but not anymore.

“We’re not having those comfortable, casual” events on land, she said. “Everything’s just been far more isolated.”

The community can also eat from the communal garden in addition to visiting a local grocery store. 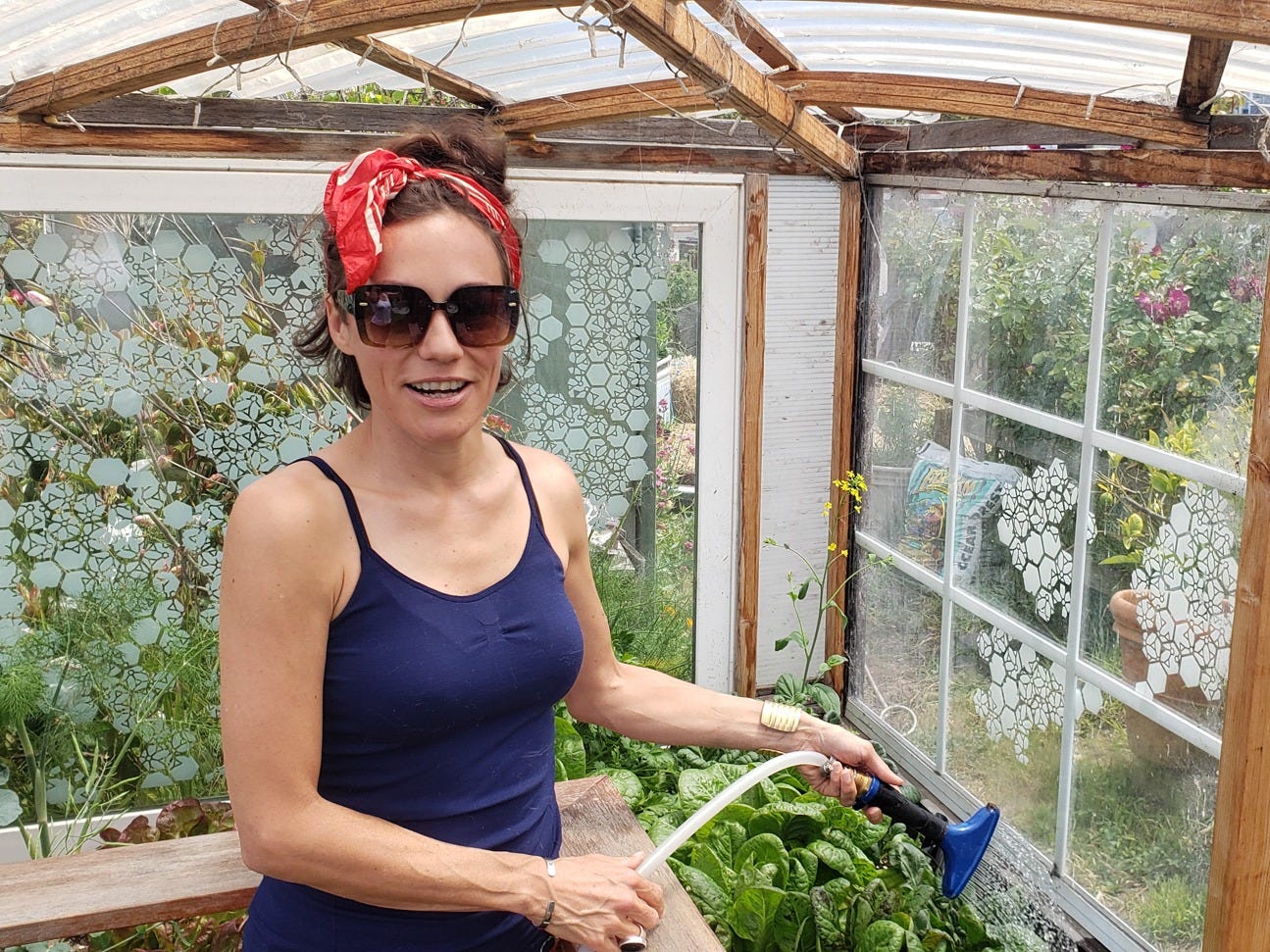 Raylene GorumGorum in the community garden.

“I have a salad almost every night just from my garden,” Gorum said.

Other than those minor changes, life hasn’t changed too drastically for her.

“Structurally, it’s very much the same,” she said.

She works as an artist, designing large-scale installations for tech companies or public institutions in the region. But commissions are on hold given the current state of things. 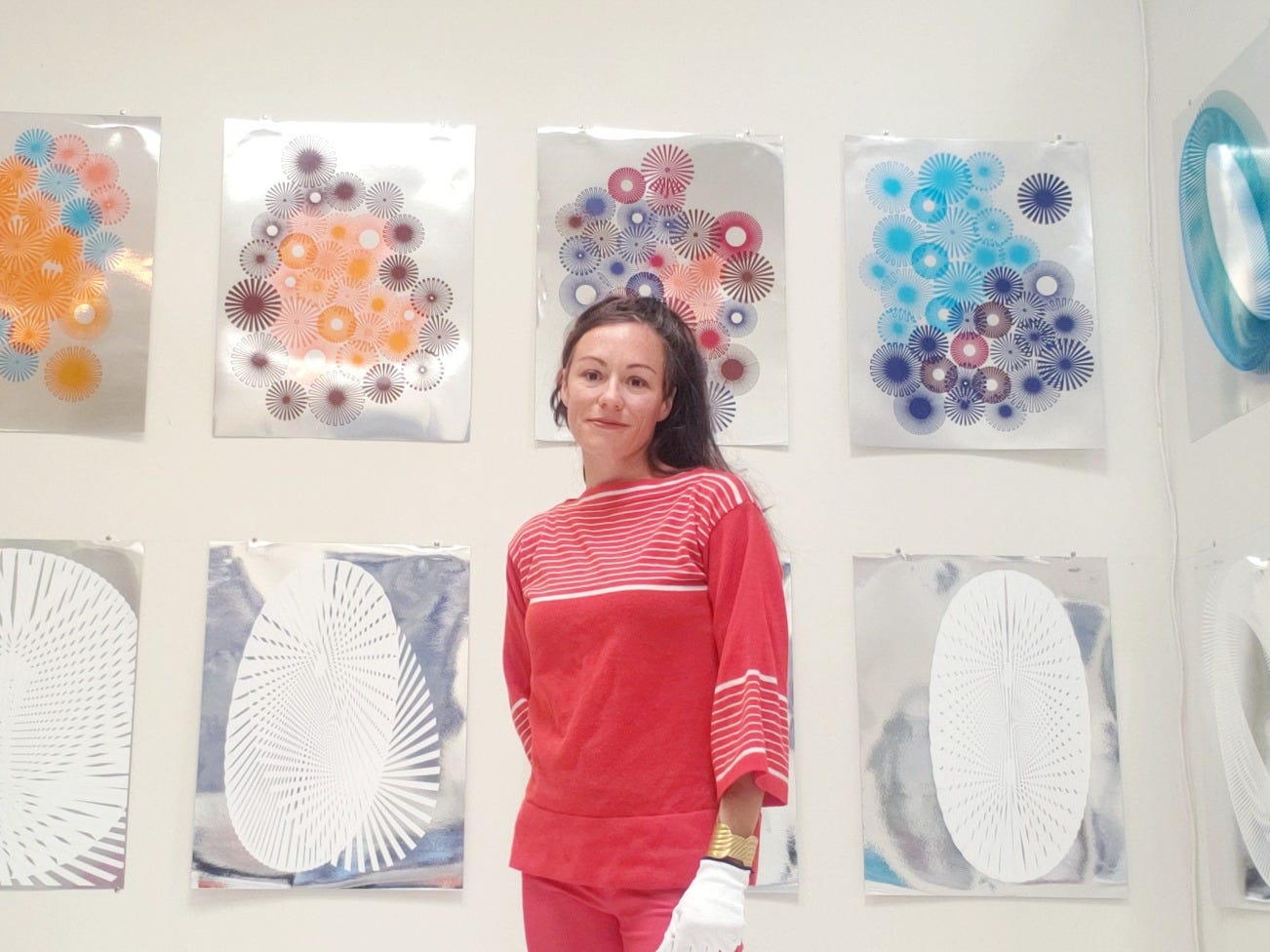 Raylene GorumGorum in her studio in Sausalito.

“For the first time in a long time, I’ve switched gears, and I’m working on a series that is just me dealing with things,” Gorum said.

She spends about six hours in her studio daily and rides her bike to and from her houseboat. 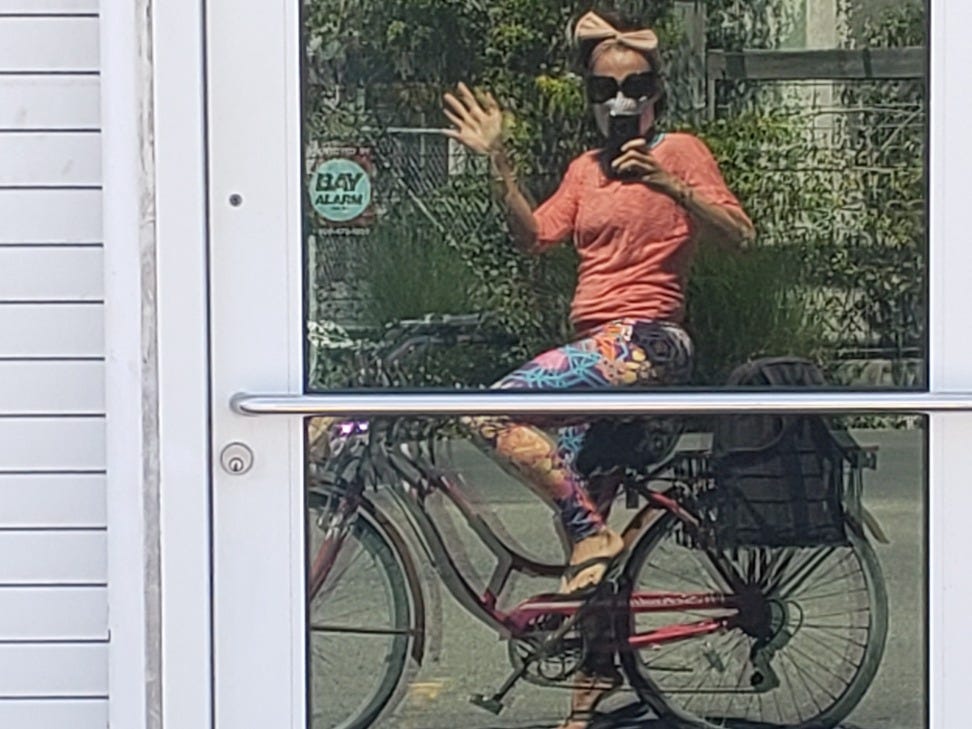 Raylene GorumGorum rides her bike from her houseboat to her studio.

Gorum may not be able to take her boat out on the water, but she’s been getting out there in other ways. 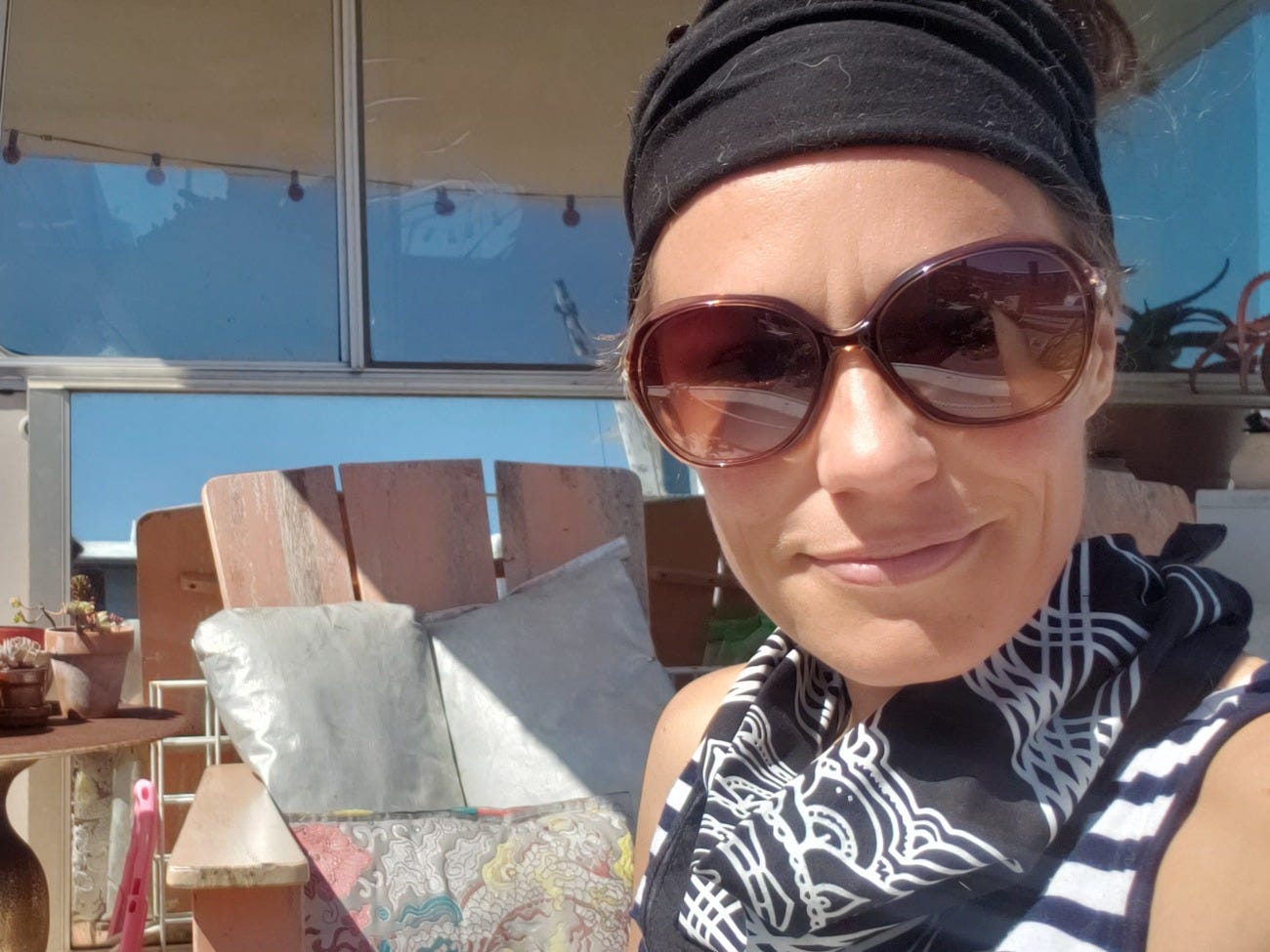 Raylene GorumGorum on her boat deck.

The community has started conducting waterfront float-up concerts, where musicians play from a platform and everyone arrives by kayak, boat, or paddleboard to watch from a distance. 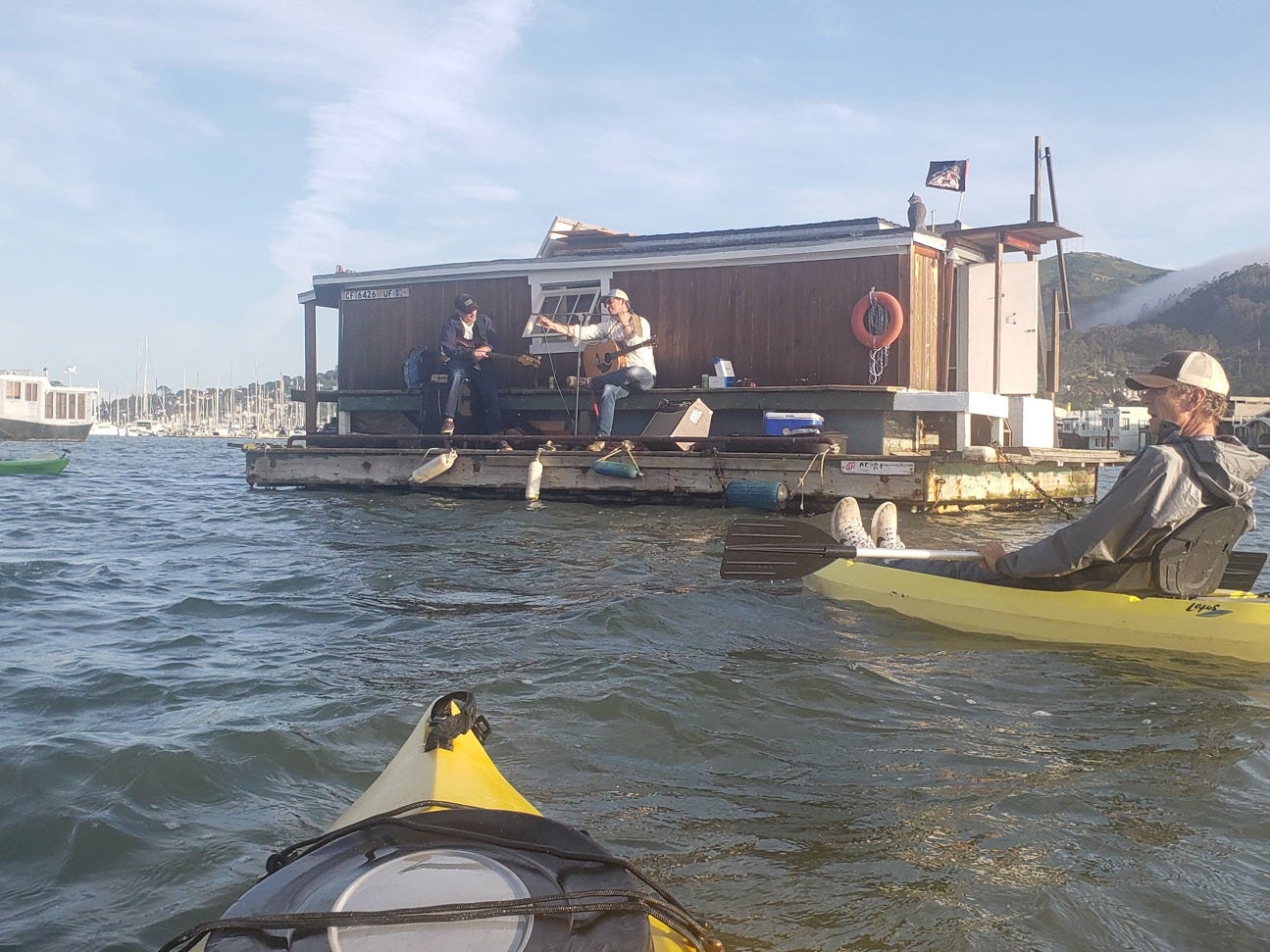 “And then the music starts and it’s usually pretty easy to keep your distance,” Gorum said. “Because you’re moving, you’ve got to keep up with the tide and the winds and you just keep moving around.”

As a community, they have created clever ways to stay connected and anchored during a time of so much uncertainty. 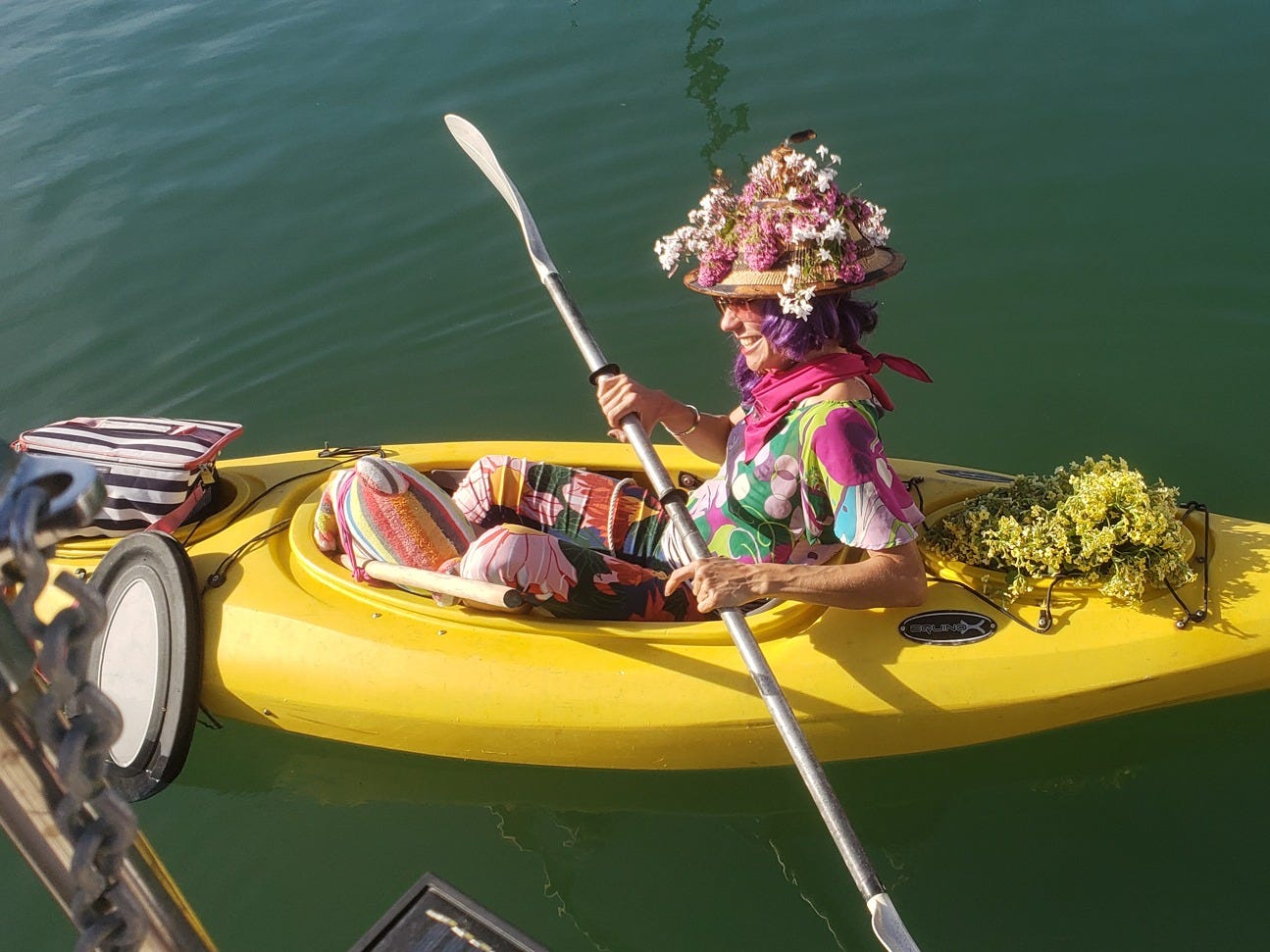 Raylene GorumGorum on her kayak.

“I think we’re adaptable and very creative and come up with new solutions,” Gorum said. 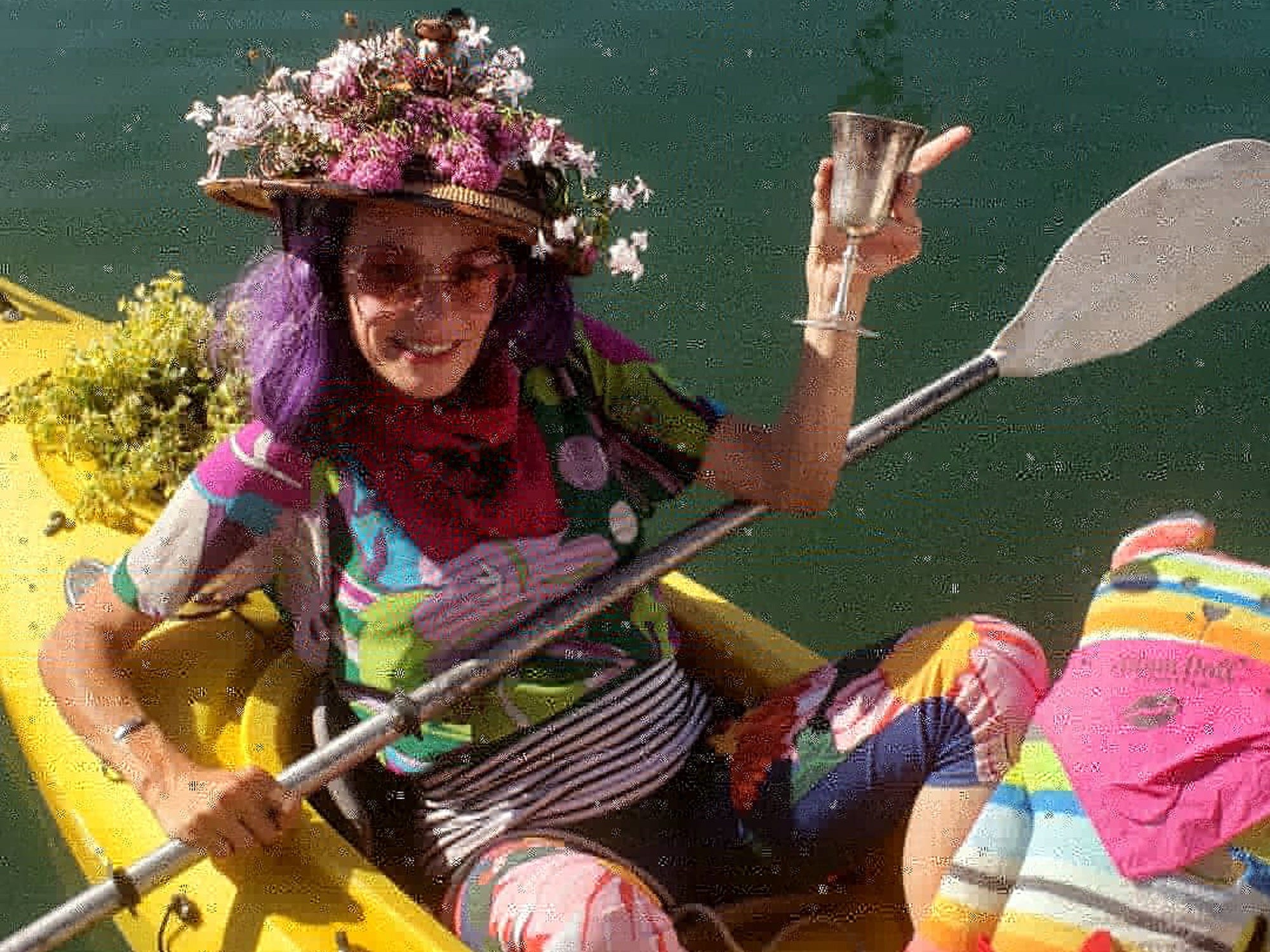 Raylene GorumGorum on her kayak.

“Like that concert just lifted everyone’s spirits so much,” she said. “You can see that there’s possibilities if you just literally think outside of the box.”

No one knows for certain when life can return to normal, but Heiden said the way they’re living is sustainable for the duration of the pandemic.

“I don’t have any intentions to return to land anytime soon,” she said.

Gorum feels the same about her beloved community. 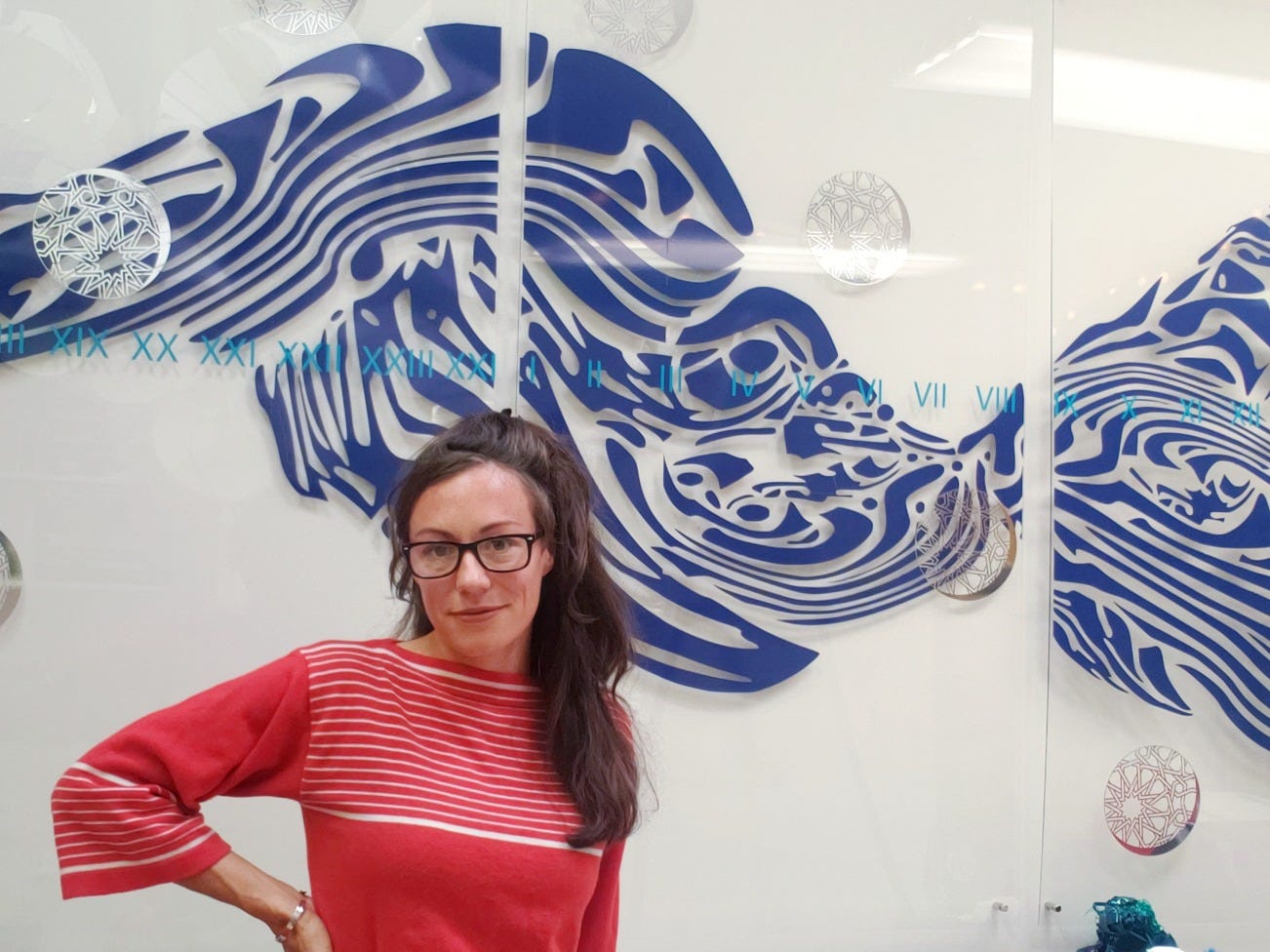 Raylene GorumGorum in her studio.

From her vantage point, her community and its camaraderie were perfectly poised to weather a storm like this. 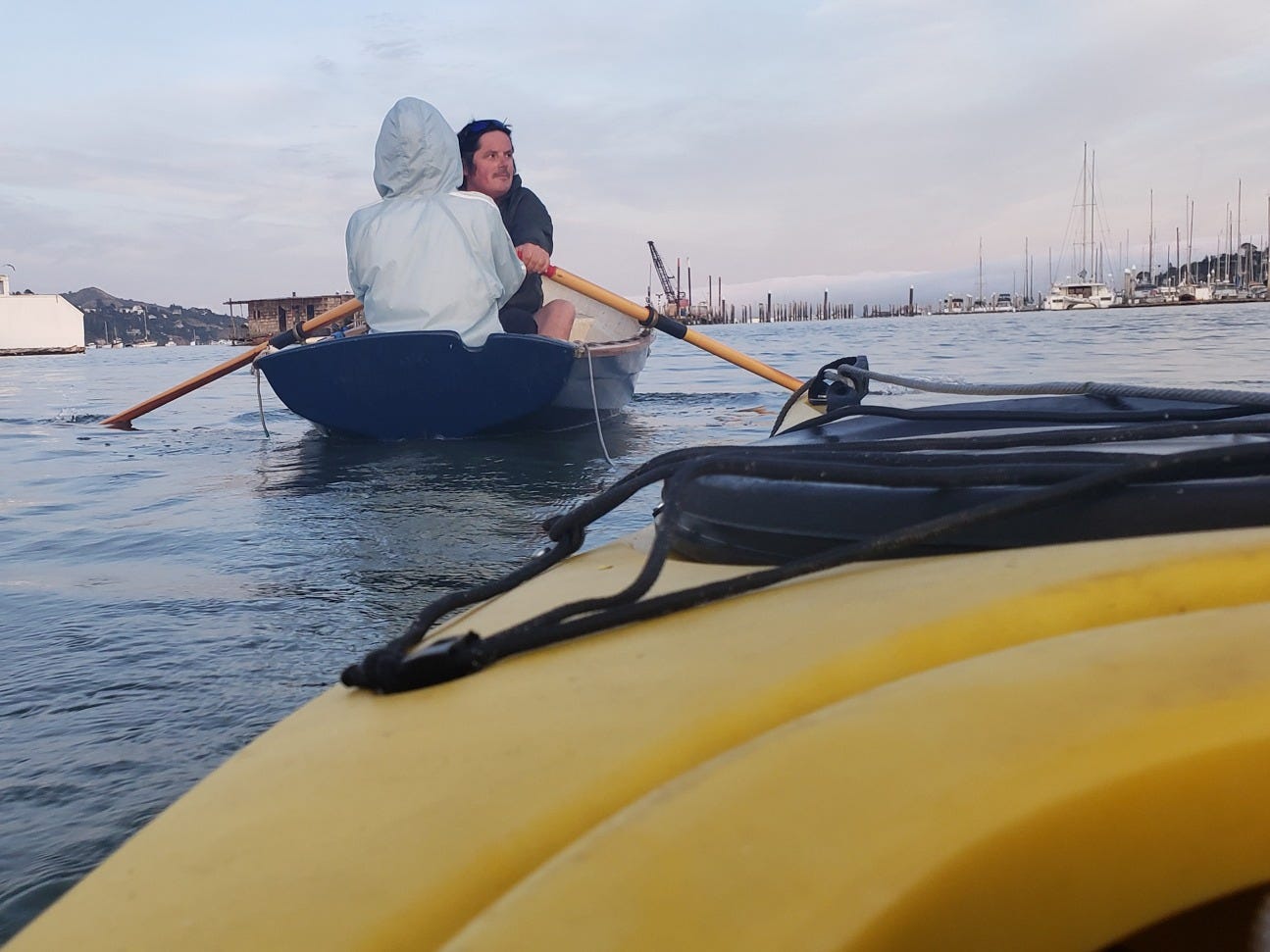 “We’re all looking for ways to get back to our magic,” Gorum said.