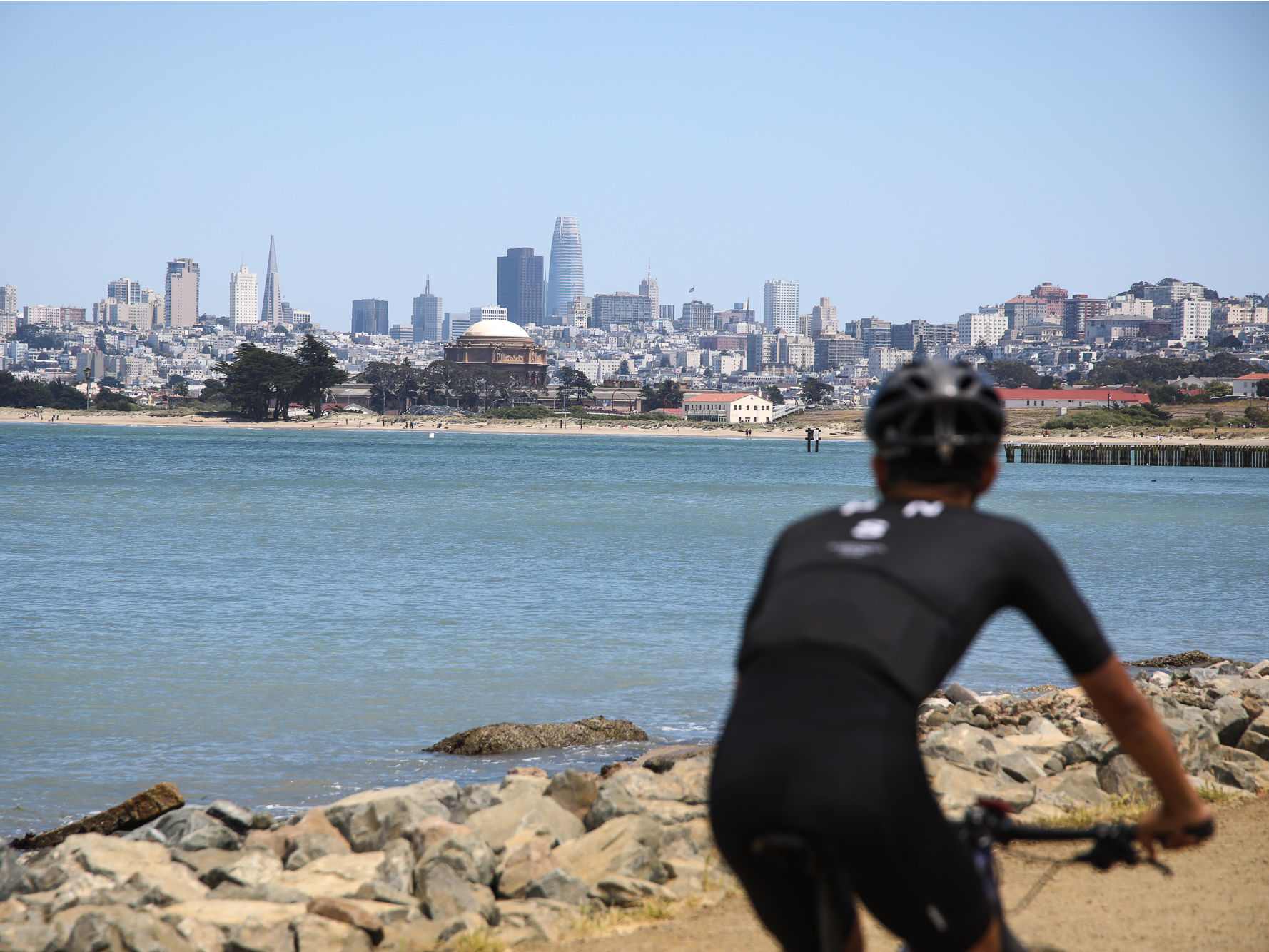 Katie Canales/Business InsiderA cyclist rides with the city of San Francisco in the background in 2019.

The rent for a studio in San Francisco fell more than 30% from what it was last year, yet another indication that remote work and the pandemic are altering the city’s real estate market.

The median rent for a studio in the city is now estimated to be $US2,285, a 31% drop from what it was last September, according to new data released Tuesday by Realtor.The median rent for a one-bedroom apartment and a two-bedroom apartment dropped 24% and 21%, respectively. Out of all the US markets included in the report, San Francisco saw the biggest rent decreases for two-bedrooms, one-bedrooms, and studios.

Rent statistics and anecdotal data have for months pointed toward a trend of people leaving San Francisco. Moving companies in the city have been slammed with business in recent months due to the influx of residents seeking to move away, as Business Insider’s Rob Price reported. And according to an August Zillow report, nearly twice as many homes are for sale in San Francisco as the same time last year.

Reports of residents leaving the city, however, are nothing new and predate the COVID-19 pandemic â€” soaring housing prices, a high cost of living, and other factors have been cited as key drivers to exit San Francisco in recent years. But an “urban flight” from the city has been accelerated as some of the city’s most attractive amenities â€” like museums, indoor restaurants, and bars â€” remain shuttered, and the rise of remote work has allowed workers in tech and other sectors to move to places with cheaper costs of living.

Big tech companies like Google and Facebook, with headquarters in the region, have announced that their workforces will be working from home well into 2021, freeing their workers from being bound to housing near their Silicon Valley offices. And some firms have also floated shifting to a spoke-and-wheel model, where employees can work out of satellite offices rather than one main campus.

San Francisco is just one pocket of Silicon Valley that has been said to be experiencing an exodus of people. Santa Clara and San Mateo, two cities in the heart of Silicon Valley, took the No. 3 and 4 spots on Realtor’s list for the biggest drops in studio rent.

Some reports speculated that people fleeing the Valley would take to the surrounding areas instead, which boasted much lower rents. Indeed, Sacramento, California’s capitol, about 100 miles northeast of San Francisco, took the No. 6 spot for highest studio rent increases. Many have also reportedly taken to the affluent wine country north of San Francisco, snatching up wealthy homes there.

San Francisco isn’t the only urban area to see its once high-priced living drop during the pandemic. New York has seen a similar phenomenon â€” it, too, makes an appearance in Realtor’s data as experiencing a 15% drop in the median rent for a studio since this time last year.

Since the onset of the pandemic, a debate has ensued on whether people will want to live in major US metro areas in the short- and long-term.