A San Francisco tech worker transformed her patio into an outdoor oasis for around $1,800. Here's a look at the before and after — and how she crafted the perfect space. 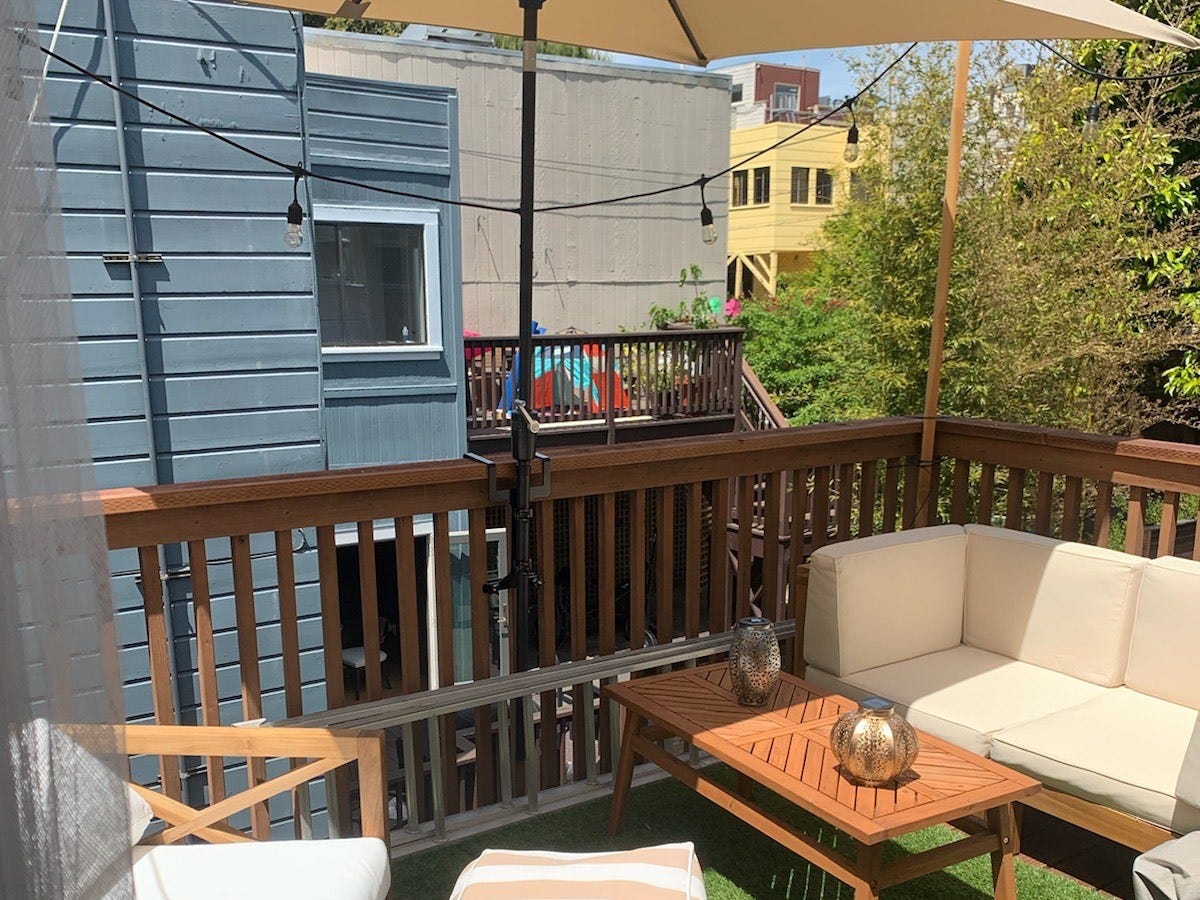 Before the start of the coronavirus pandemic Kristy O’Neill, a San Francisco-based director of client experience at tech startup Movable Ink, rarely used her patio. Since a shelter in place order went into effect in San Francisco on March 17, it’s become what she has called her “oasis” â€” something she’s worked to transform, scouring Wayfair for deals and waiting for each new paycheck to buy one or two items from her list.

Never one to splurge on furniture in the past, this time she decided to invest in high-quality, sturdy pieces. Still, she and the roommate she shares the space with have managed to create a mini urban retreat right out their window, all for less than $US2,000. These days O’Neill reads outside and even cooks outside, using a crockpot.

“This space has been a life-saver, letting us enjoy the outdoors and get some fresh air in the middle of San Francisco’s Mission District, while still being able to keep our distance,” O’Neill told Business Insider. “We’ve had breakfast out here. Now, on lighter work days with less calls, we pop up the umbrella and work outside. And on milder nights we’ve been reading or listening to music out there as well.”

Business Insider reached out to O’Neill to learn more about how she budgeted for her balcony’s makeover, how she decided on the items she purchased, and how she’s made the most of the outdoor area since upgrading the space.

Before: The balcony sat mostly empty 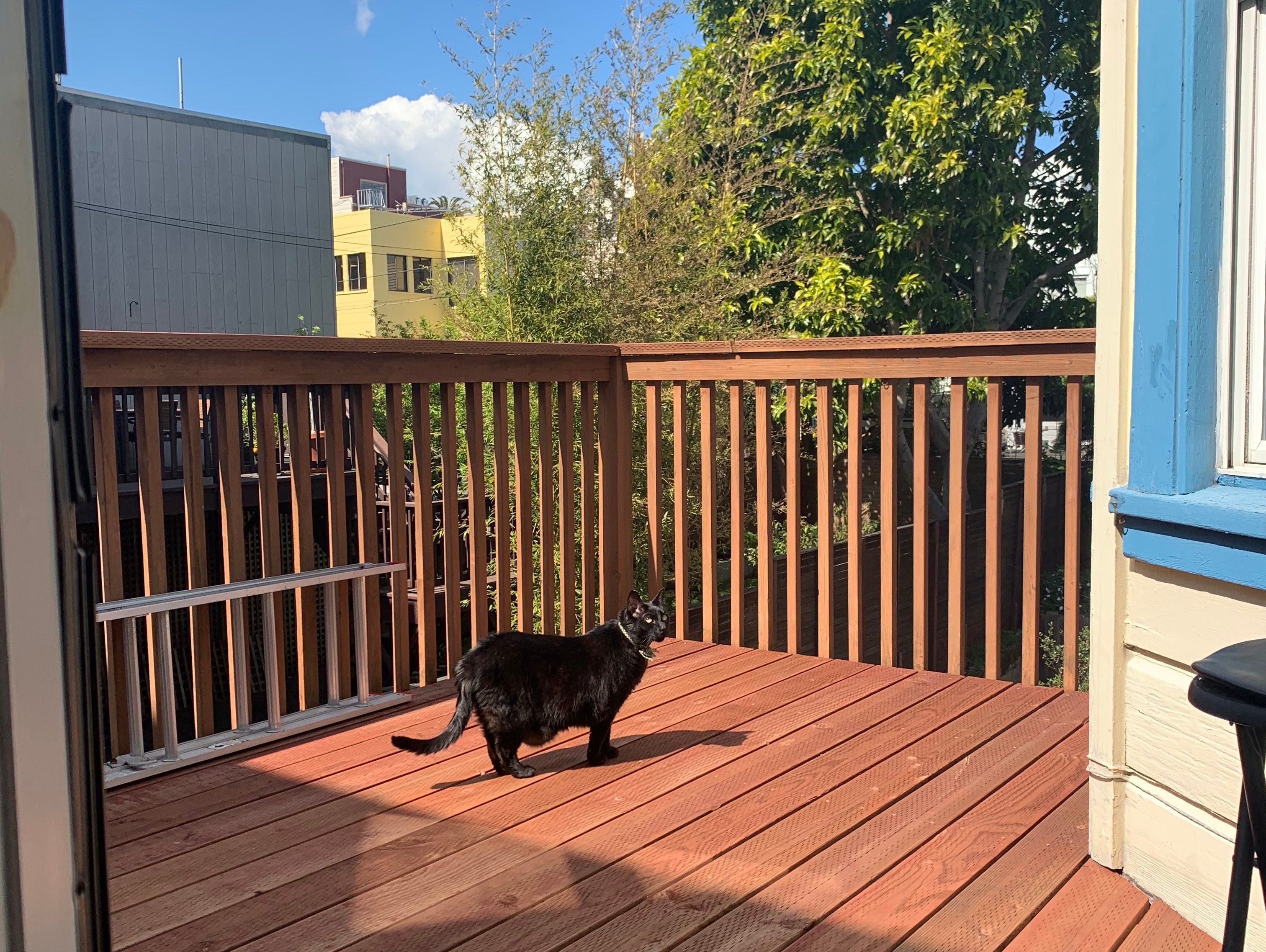 Kristy O’NeilThe patio before the start of the pandemic.

O’Neill’s former roommate, who had lived in the room with direct access to the patio, moved out days before the city’s shelter-in-place order went into effect. That departure made a once-unused space accessible – right at a time when O’Neill would no longer be able to go safely outside on a routine basis.

The now two roommates have been splitting the rent in half since the third roommate left.

“Our landlord is great and hasn’t raised the rent in five years, so us splitting it two ways is still well within market rate for this area and the amount of space we now have,” she said. “It may still be under market even. And it’s great to have the extra room especially now for a home office and escape space.”

“The thought of being stuck inside for a few weeks seemed daunting and claustrophobic,” O’Neill said. After the third roommate left, she decided to “distract” herself with “design and retail therapy.”

That distraction turned into a vision of creating a relaxing escape. 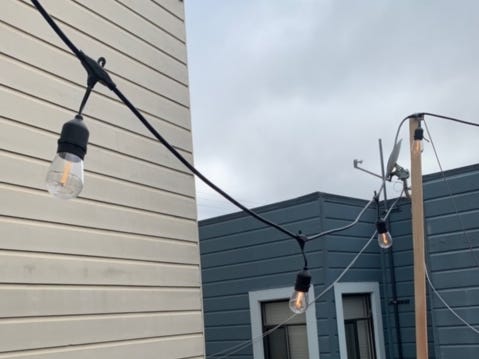 It just so happened that one of O’Neill’s last trips before the start of the pandemic was to Home Depot, where she by chance picked up patio lights for about $US50 -“so that we could one day enjoy the space on a nice night, not knowing what was on the horizon.”

After installing the lights, O’Neill began searching for furniture.

“I started with pieces that looked comfortable – and had reviews that confirmed that assumption, that would physically fit in our 6-foot by 12-foot space, then filtered by reasonable pricing, aesthetic and vibe, and durable materials,” she said.

The first big purchase was a loveseat 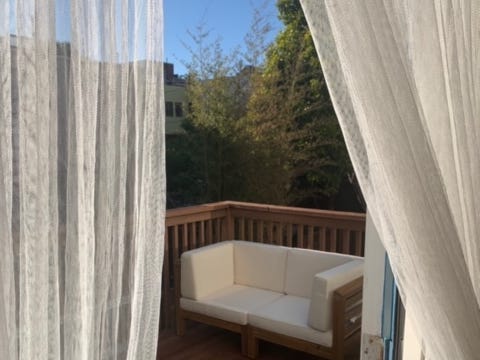 Kristy O’NeillO’Neill found this loveseat on Wayfair for just over $US400, and she assembled it herself.

“Once I assembled it and got it onto our patio, I added from there,” she said.

She was careful to space out the purchases per paycheck to avoid adding any debt and took advantage of clearance and holiday sales where possible.

“I’m thankful and blessed to have not been affected by layoffs or downsizing due to the pandemic but the world is not out of the woods yet and I’m being extra credit conscious during these unpredictable times,” she said. 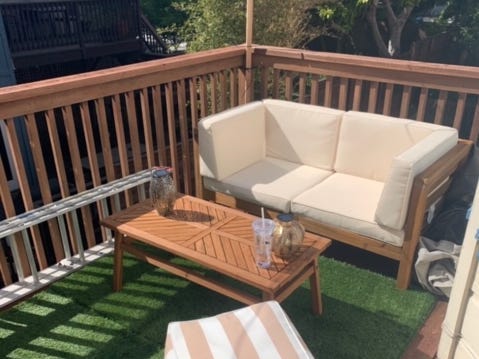 Wanting to avoid buying a bunch of items at once that might not fit or work as well as she hoped, O’Neill spaced her purchases apart and iterated to find solutions to address obstacles that popped up.

She bought the coffee table pictured above from Wayfair (for about $US140) to provide a place for her laptop and water bottle to be able to comfortably get work done.

And, after working at the coffee table, she discovered the wood balcony floor would get overheated, so she bought two faux-grass area rugs for a total of about $US130 to address that issue.

These also added to the “outdoor nature feel” she was after.

One of the unexpected rituals she now enjoys that she never had before the pandemic is cooking and eating breakfast on her balcony on a weekday. 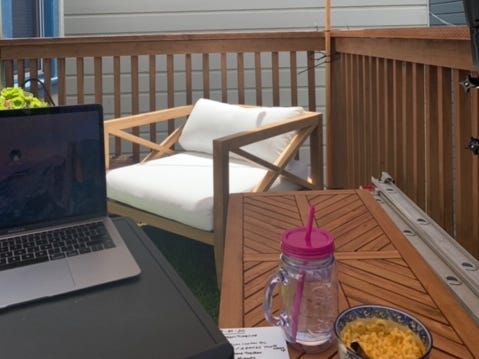 Kristy O’NeillEating out on the balcony.

Little by little, she added in an umbrella and umbrella stand for protection from the sun and an oversized chair for when she and her roommate both worked outside – all for about $US800.

With shopping in person a challenge, O’Neill said she spent a lot of time reading user reviews and avoided bigger-ticket options when there were no or only a limited number of reviews available.

“I read the positive ones, the bad ones, and many of them in the middle to get the best sense of the pros and cons before hitting the ‘buy’ button,” she explained.

The after: The complete patio transformation 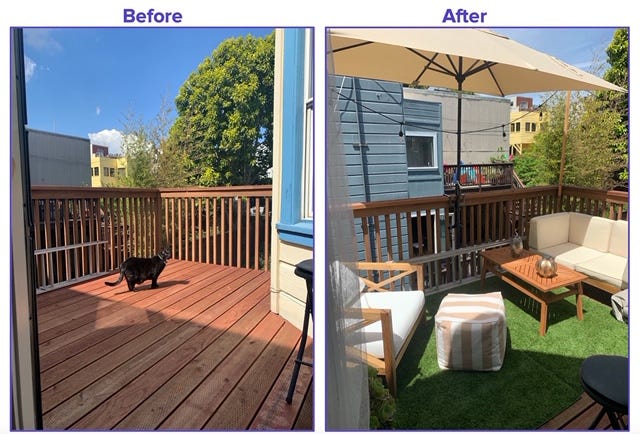 In the five months since the two roommates started updating their balcony, O’Neill said the two purchases she’s gotten the most mileage out of have been the umbrella and the lights.

“Now in the summer months, the umbrella has allowed us to spend even more time outside without getting burned or too hot,” she said. “It also prevents our laptops from getting overheated when we try to work outside. The cooler temperature under it has been so lovely and refreshing, especially during this heatwave, when there is a light breeze.”

As for the lights, she appreciates that they’re durable and haven’t broken, despite how windy it gets in the city.

“Those two purchases have allowed us to get so much more use out of all the other purchases, so we can stay outside longer while still maintaining our social distance,” she explained.

Reading and listening to music have been some of the main ways O’Neill has spent time on her patio now that it’s her urban oasis. 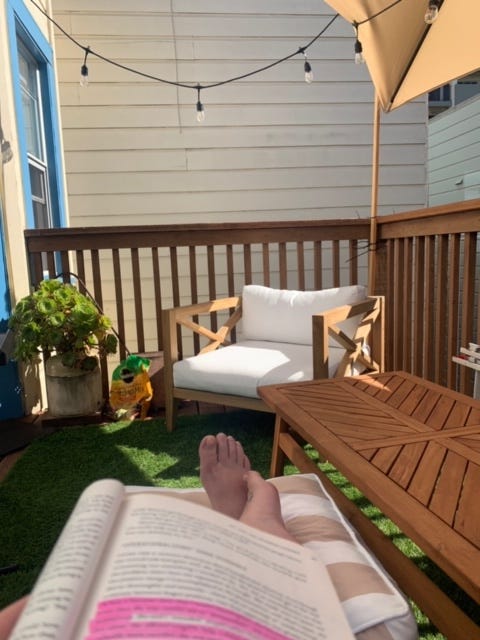 Kristy O’NeillEnjoying a nice day out on the patio.

Even O’Neill’s cat Jasper has enjoyed the outdoor space. 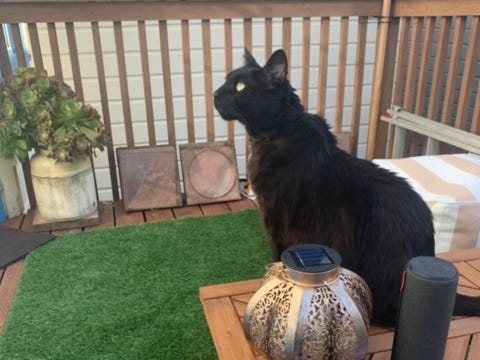 Kristy O’NeillJasper in the great outdoors.

“He loves lounging on the loveseat and the coffee table while we’re out there. But only if it isn’t windy,” she said. “He’s the literal definition of a scaredy cat having been an indoor cat his whole life, so an invisible gust of wind is a dealbreaker for him.” 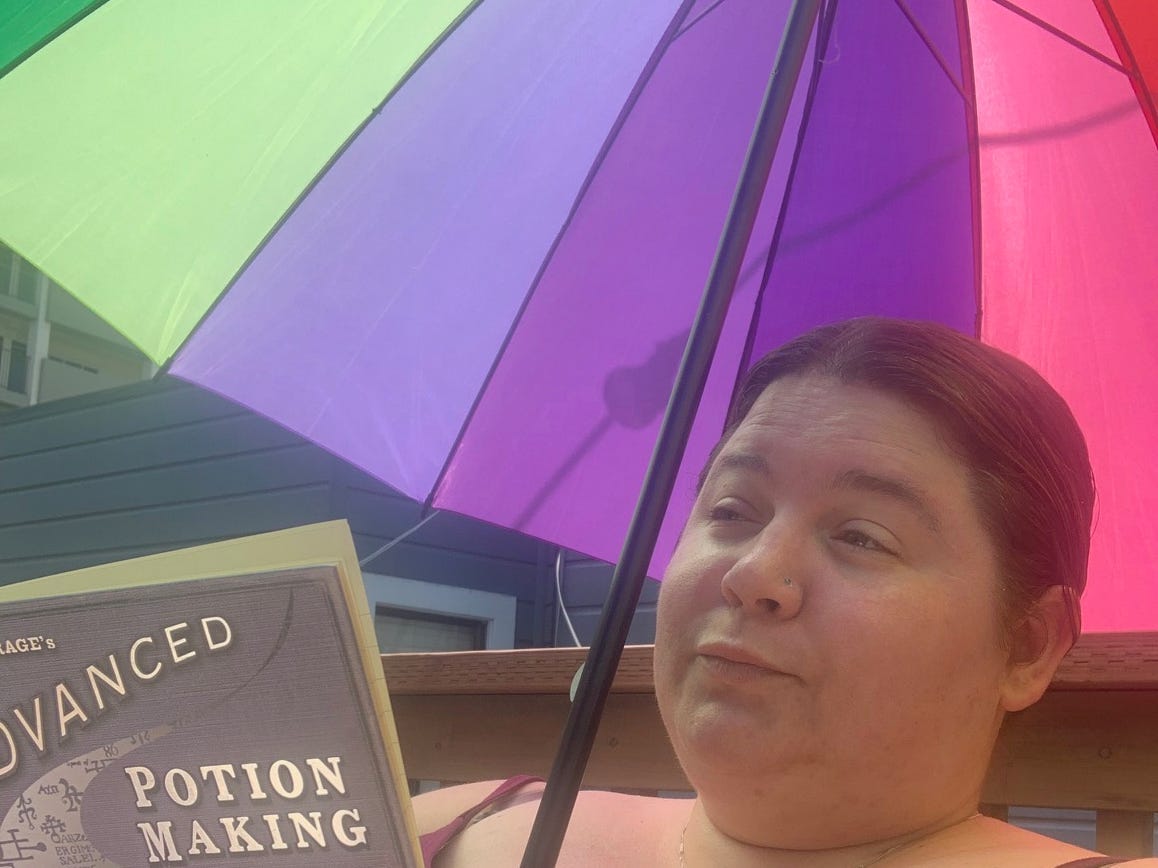 O’Neill and her roommate even joined their next door neighbours, who have a high-resolution projector, for an outdoor screening. 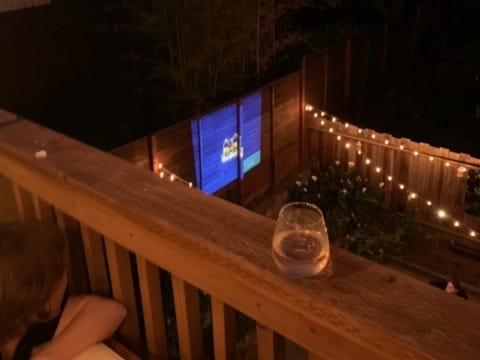 “They projected an episode of Glee on the fence in the backyard and we were all able to watch from our respective outdoor spaces and still keep our distance safely,” she said.

In all, completing the balcony transformation has been worth it.

“It has helped with those ‘claustrophobic’ feelings, allowing us to get air and sun and a nice breeze while still being able to maintain social distancing,” O’Neill said.

And not taking it all on at once has made it easier from a financial standpoint, she added, explaining that she didn’t want to rack up credit card expenses during a pandemic and potentially get herself in a hole.

“We just kept iterating until we found what worked for us.”

This Business Insider article was originally published on September 3, 2020.