A San Francisco ballot measure introduced Wednesday would tax large companies in the city that earn at least $US1.7 million in annual gross receipts and whose CEOs make much higher salaries than employees.

The measure, put forward by Supervisor Matt Haney, is dubbed the “Overpaid Executive Tax.” The higher the wage inequity between the CEO and the company’s average workers, the higher the surcharge. So large firms that pay their executives 100 times more than their median workers would have a 0.1% tax. If a CEO’s salary is 200 times more than the average workers at the company, the surcharge would be 0.2%.

As The San Francisco Chronicle reports, stock options that are typically doled out in the tech world would count as compensation, which would qualify those companies for the tax.

A spokesperson from Haney’s office confirmed to Business Insider in an email that the tax would apply to any large company engaging in business in the city of San Francisco, whether or not they are incorporated in the city. That could include tech giants that call San Francisco home – including Salesforce, Twitter, Square, and Uber – and their high-earning executives.

But as the Chronicle notes, some tech companies that pay their employees somewhat more equal salaries regardless of ranking would be exempt since the ratio of high-earning execs to average workers would be lower.

The surcharge is designed to potentially save hundreds of healthcare jobs and improve public health for vulnerable residents as the city continues to stave off the spread of COVID-19. Haney wrote in a Twitter post that the tax could raise up to $US140 million a year during a time when San Francisco faces a $US2 billion budget deficit in light of the economic fallout driven by the COVID-19 pandemic.

This measure is a win win. It raises the funds our city needs to fix the cracks in our healthcare system, including funding nurses to address mental health and addiction on our streets. But it also incentivizes companies to invest in their workers, not just their executives.

The measure will be on the November 2020 ballot and would only apply to large corporations, not small businesses, starting in 2022 if it passes with a simple majority. A similar tax is in place in Portland, Oregon. 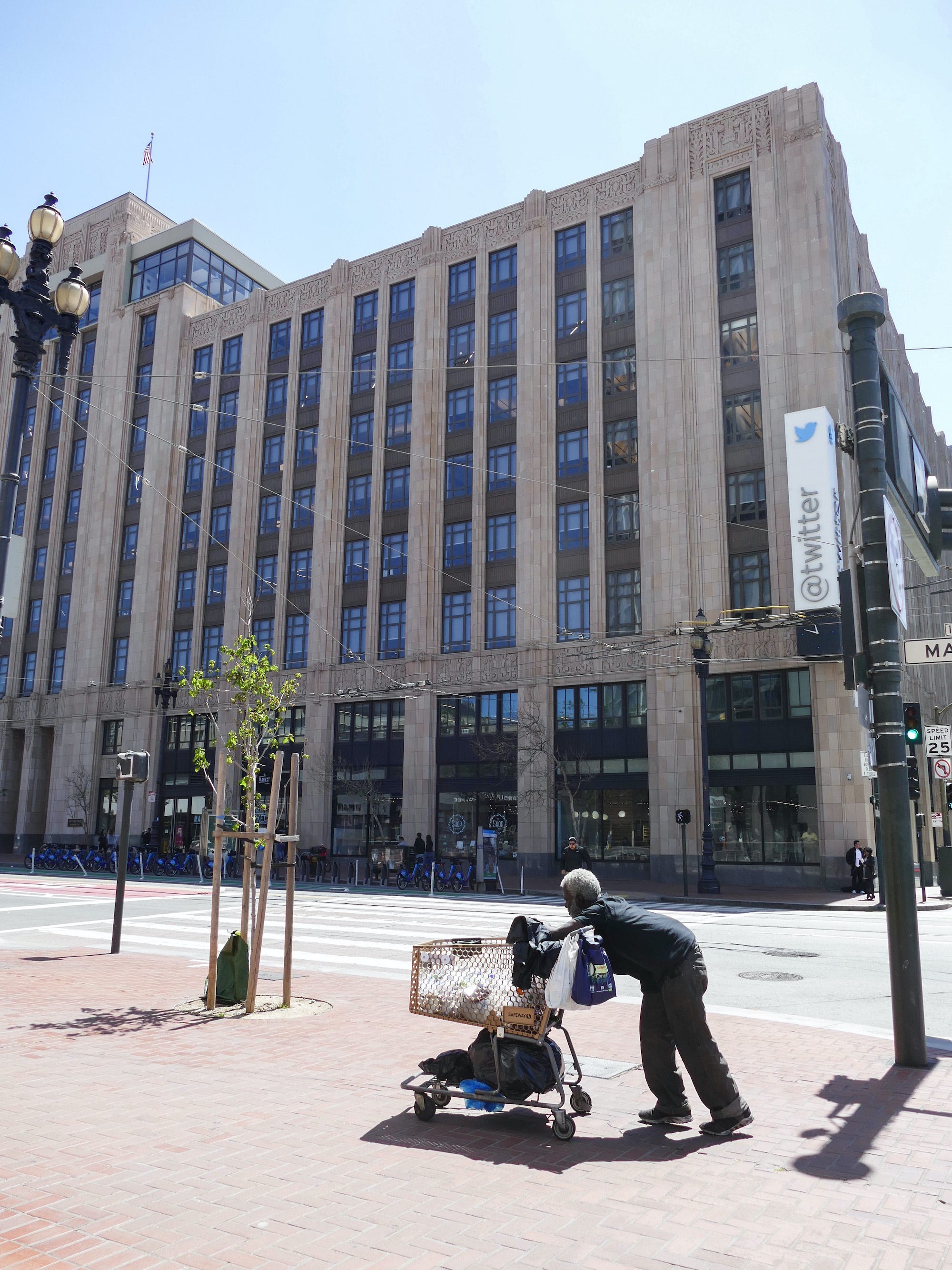 Barbara Munker/picture alliance via Getty ImagesA homeless man pushes a shopping cart with his belongings along Market Street in May 2019.

The surcharge would also potentially impact San Francisco’s glaring wealth disparity exacerbated by sky-high salaries found in the lucrative tech industry. The city’s middle class has shrunk, and a homelessness crisis has gripped the city as lower-income residents have been pushed out of the competitively priced housing market.

This isn’t the first time the city has attempted to tax large tech corporations in San Francisco. A so-called IPO tax was proposed in mid-2019 that would raise the tax on stock compensation when companies go public. The measure was tabled.

And then there was the controversial Proposition C, colloquially known as Prop C, that proposed taxing the city’s largest firms and funelling the money into efforts to fight the homelessness crisis. Most of the big-name tech companies opposed the measure, including Twitter and Square, Stripe, and Zygna. But execs like Salesforce’s Marc Benioff and Cisco’s Chuck Robbins were in support of it.