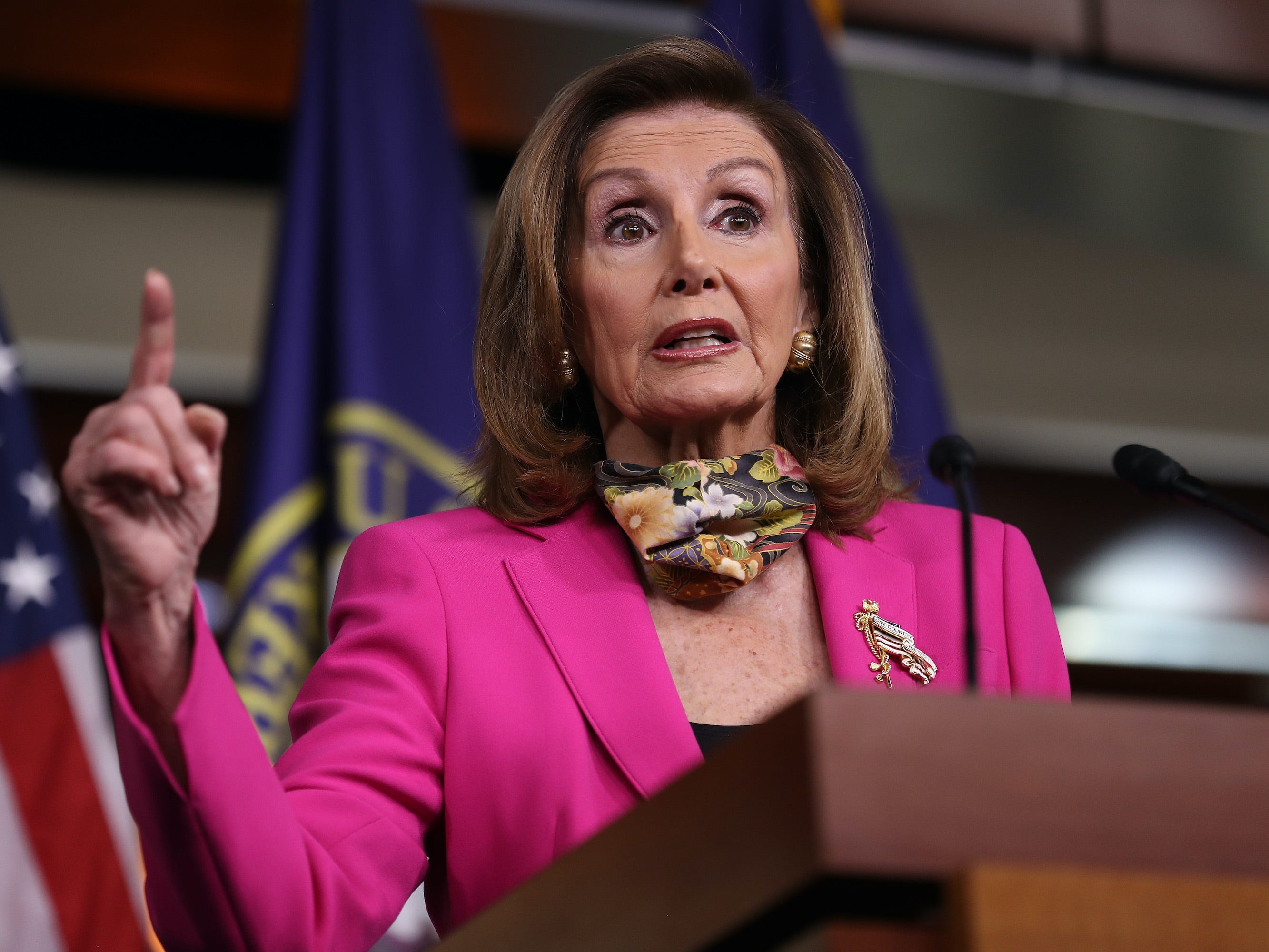 The white garage door of the Pacific Heights property was covered in graffiti. It read: “$US2k CANCEL RENT!”

This is most likely a reference to Pelosi’s proposed $US2,000 stimulus checks. Below the initial message, the vandals wrote: “We want everything!”

Next to this, the traditional ‘anarchy’ symbol â€” a circled capital A letter â€” was spray-painted.

In front of the house, a dead pig’s head covered in fake blood was left sitting on the driveaway.

A San Francisco Police Department spokesperson confirmed to Fox News that officers were dispatched after responding to reports of vandalism at around 2 a.m. on New Year’s Day. “Unidentified suspect(s) had painted graffiti on the garage door and left a pig’s head on the footpath,” the spokesperson said.

They said: “Unidentified suspect(s) had painted graffiti on the garage door and left a pig’s head on the footpath.”

The police have not yet named suspects involved in the vandalism of Pelosi’s home.

Demonstrators have previously come to the house, one of several Pelosi owns in California, to protest.

It is believed that Pelosi was not at home during the incident, according to CBS SF Bay Area. It is thought that she was in Washington, DC, at the time of the vandalism.

The defaced garage has since been covered with garbage bags and the fake blood and pig’s head have been removed.

Appalling.@FogCityMidge is right. News is ignoring.

I took this picture just 5 minutes ago. They are literally covering it up.

Dems like Pelosi will learn sooner or later: you cannot appease the violent left. https://t.co/Ohih0zVTpO pic.twitter.com/0JOxzj9KA4

Shortly after Pelosi’s home was vandalised, the same happened to Senate Majority Leader Mitch McConnell’s home in Louisville, Kentucky. His front door was strewn with messages from people asking, “Where’s my money?” according to the Courier Journal.

In a statement to the Journal, McConnell condemned the vandals.

“I’ve spent my career fighting for the First Amendment and defending peaceful protest. I appreciate every Kentuckian who has engaged in the democratic process whether they agree with me or not,” he said.

“This is different,” he added. “Vandalism and the politics of fear have no place in our society.”

The two incidents comes as tensions are running high in Congress over stimulus checks.

On Friday, Senate Republicans blocked a House-passed bill to increase stimulus checks from $US600 to $US2,000.

Pelosi, in recent weeks, reached a rare agreement with President Donald Trump over increasing the amount of money Americans would receive.