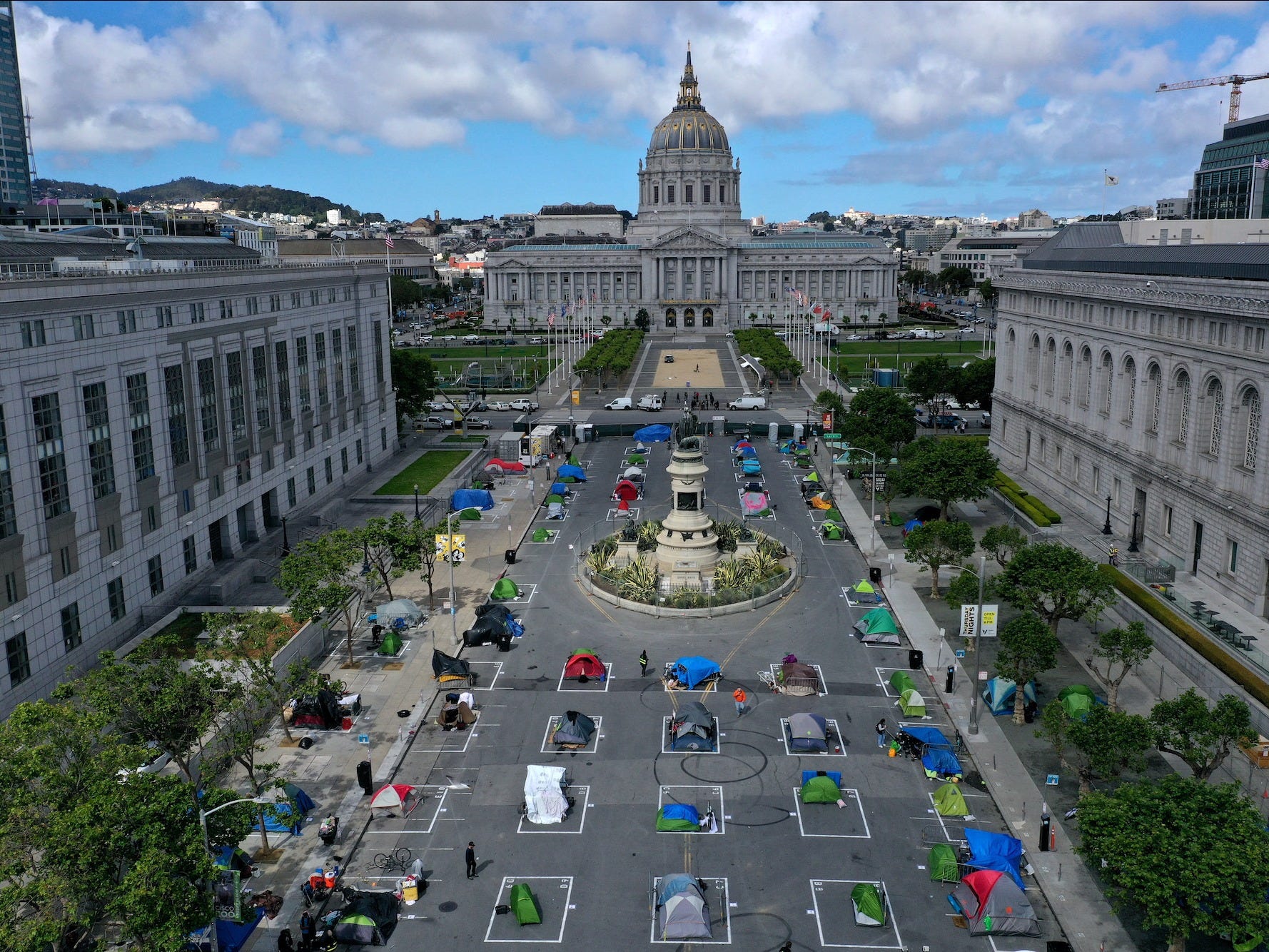 San Francisco has been among the Bay Area counties praised for its quick, decisive action in responding to the coronavirus disease, known as COVID-19.

The city has lower case counts within its population than other parts of the US. But officials have been attempting to protect one facet of the community since the get-go: its sizable, vulnerable homeless population.

Officials began limiting capacity in the city’s shelters in March to leave room for proper distancing measures in the typically crowded spaces. As a result of the thinned number of beds, the overflow has spilled onto the streets, with a 71% increase in tents cropping up on footpaths as The Guardian reports.

San Francisco has long resorted to “sweeping” such unsanctioned tent encampments on the city’s streets, instructing those who are homeless to move away from public areas not designated for setting up camp. But unless they have an alternative that is well-suited for distancing protocols, the Centres for Disease Control and Prevention has advised against doing so in light of the infectious coronavirus disease.

And so to provide a more controlled place for the homeless to set up camp, San Francisco became one of a few US cities to greenlight authorised tent sites.

The first temporary site opened in mid-May. Here’s what it looks like.

Residents even voted in 2016 to ban tents on public footpaths.

But as the coronavirus disease closed in on the city in March, many apart of San Francisco’s homeless community were forced to shelter in place on the streets. And as shelter capacity was decreased, more homeless individuals set up tents on footpaths instead.

The “Safe Sleeping Site” program was designed to provide resources to homeless residents in a controlled environment instead of in unsanctioned tent encampments throughout the city.

“While in normal times I would say that we should focus on bringing people inside and not sanctioning tent encampments, we frankly do not have many other options right now,” Mayor Lond Breed tweeted on May 15.

The first tent campsite opened on May 14 near City Hall. 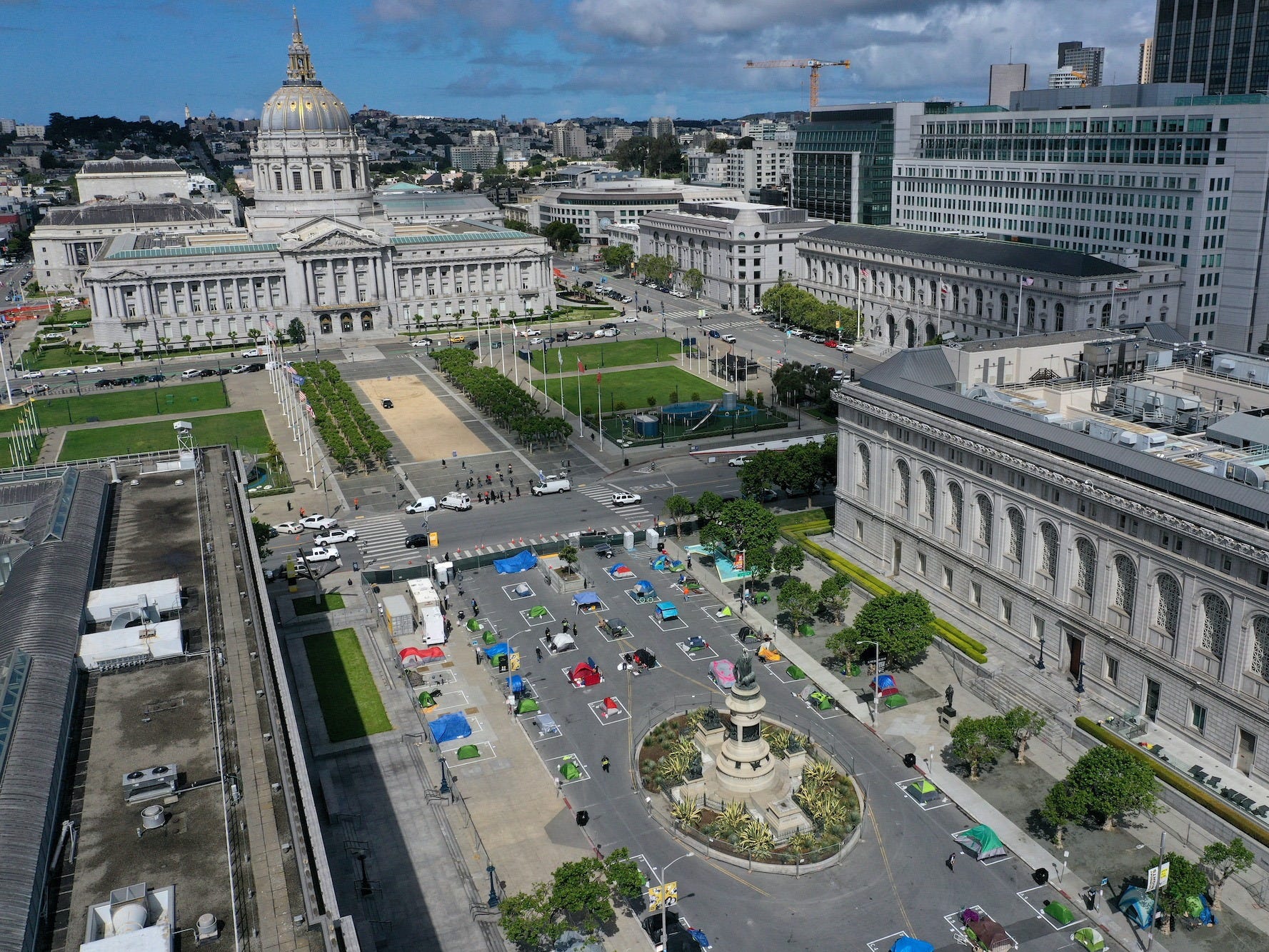 Squares painted in white fill a parking lot, with 70 tents positioned within them. 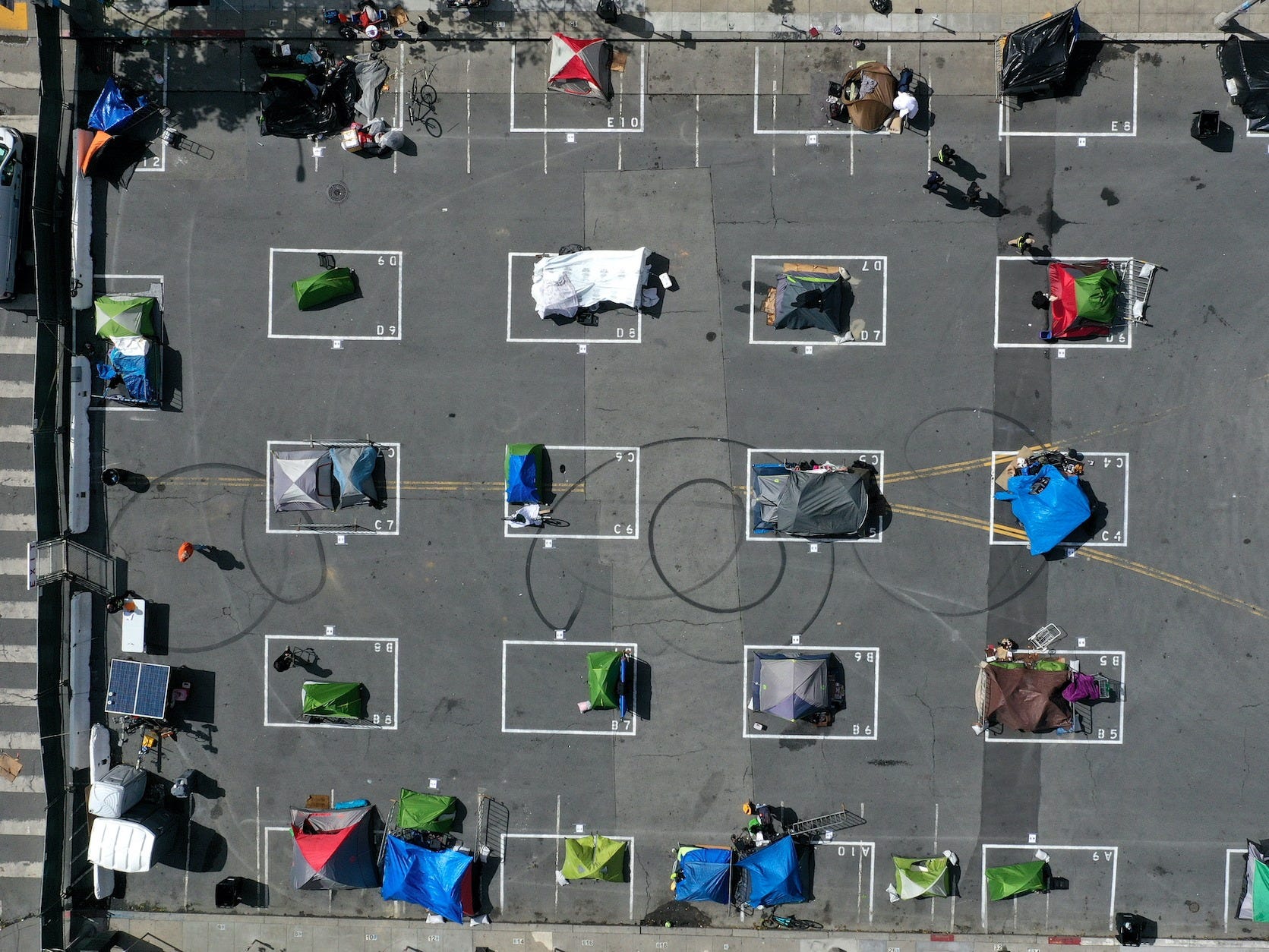 Occupants have access to resources including meals, bathrooms, showers, and the ability to charge their phones. The site is monitored around the clock. 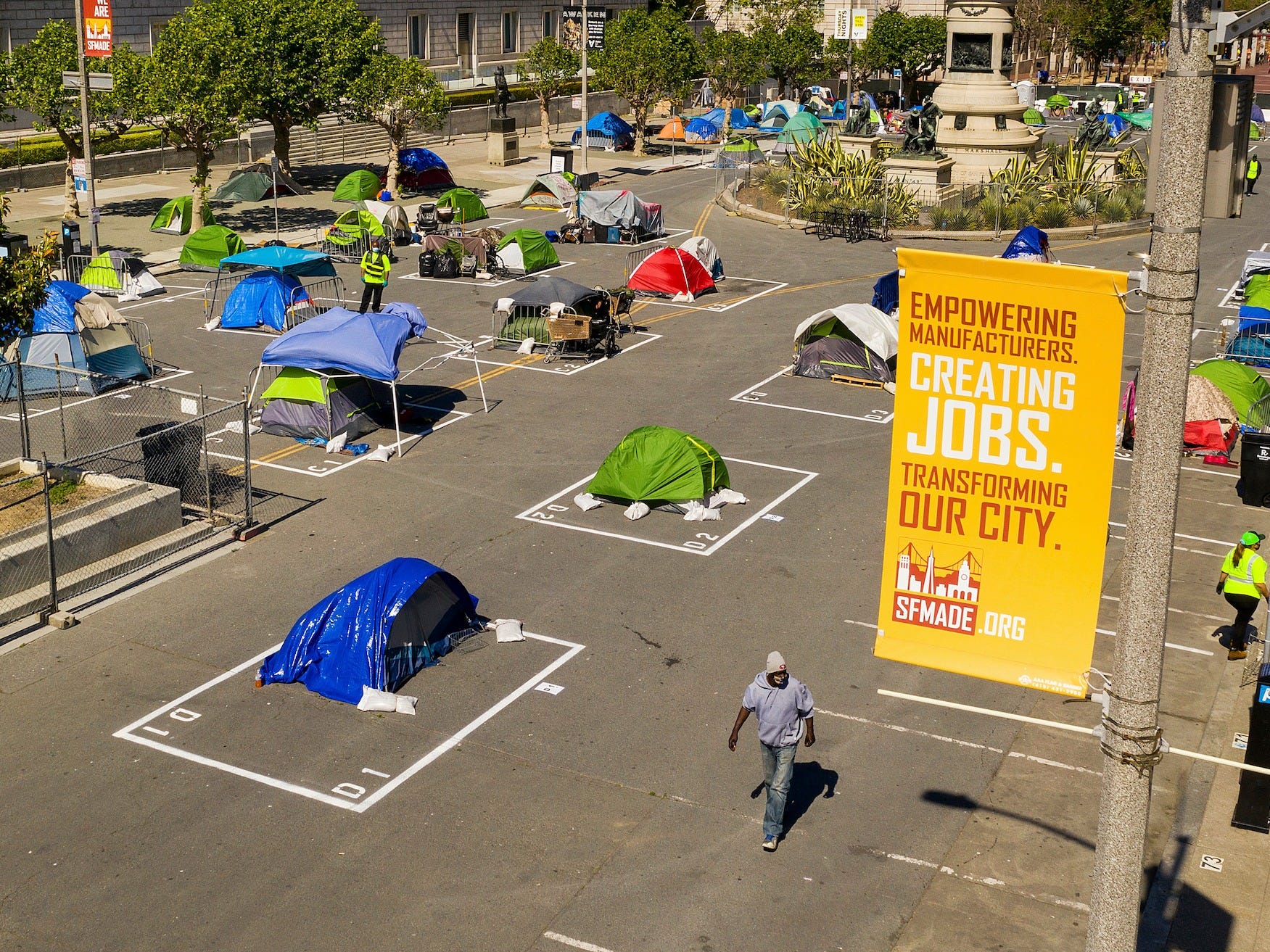 Noah Berger/APSan Francisco’s first temporary sanctioned tent encampment for the homeless on May 21.

Many of the estimated 8,000 people living on the streets of San Francisco cannot take the recommended precautions to avoid contracting the coronavirus disease. 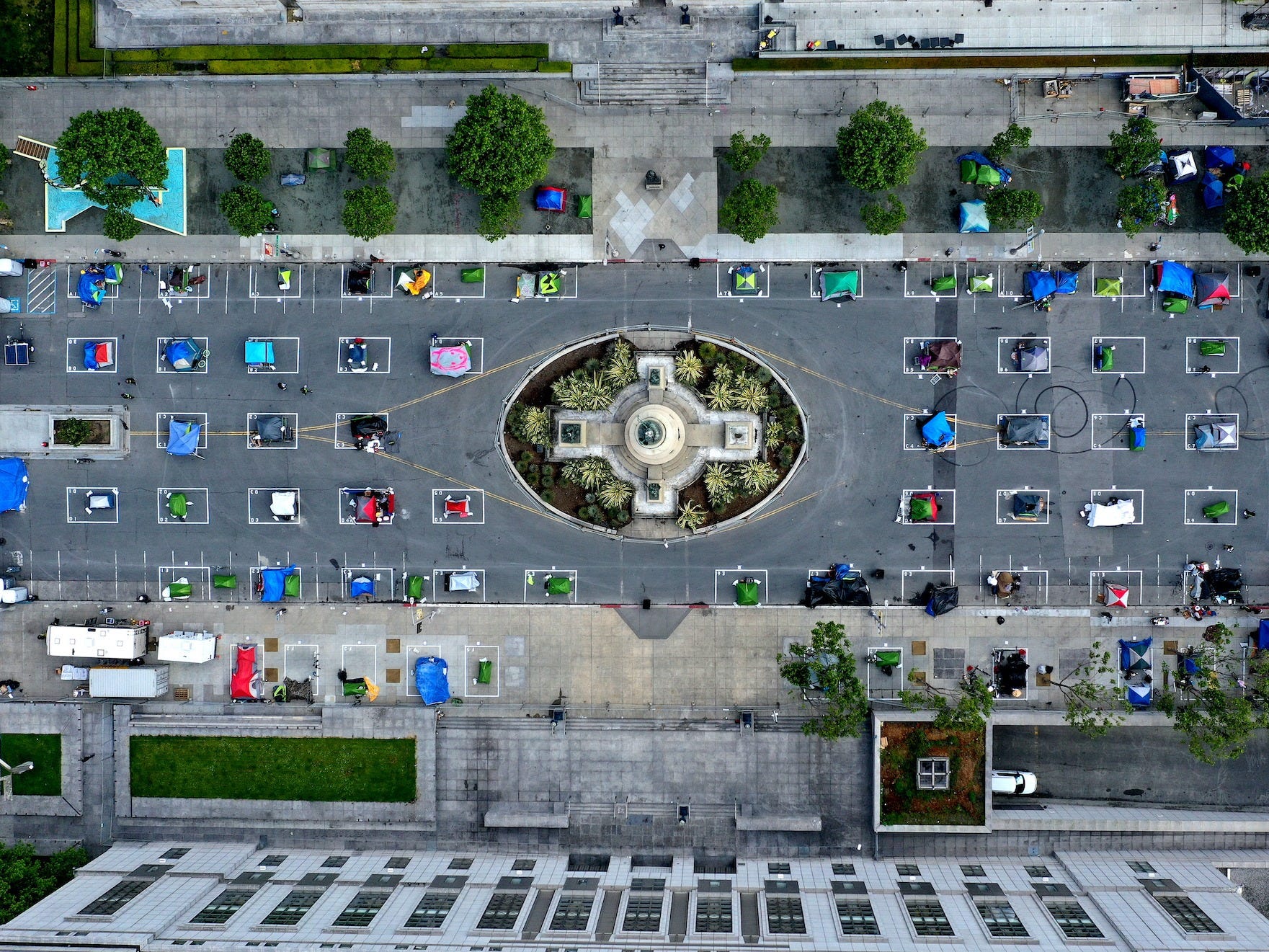 Reliable access to hand-washing stations and other means to practice personal hygiene is a step forward in improving protection for them.

An outbreak has already hit the homeless community, with 68 homeless residents found to have tested positive for COVID-19 in early April.

Another tent camp is set to open in San Francisco’s infamous Haight-Ashbury District in the coming weeks. 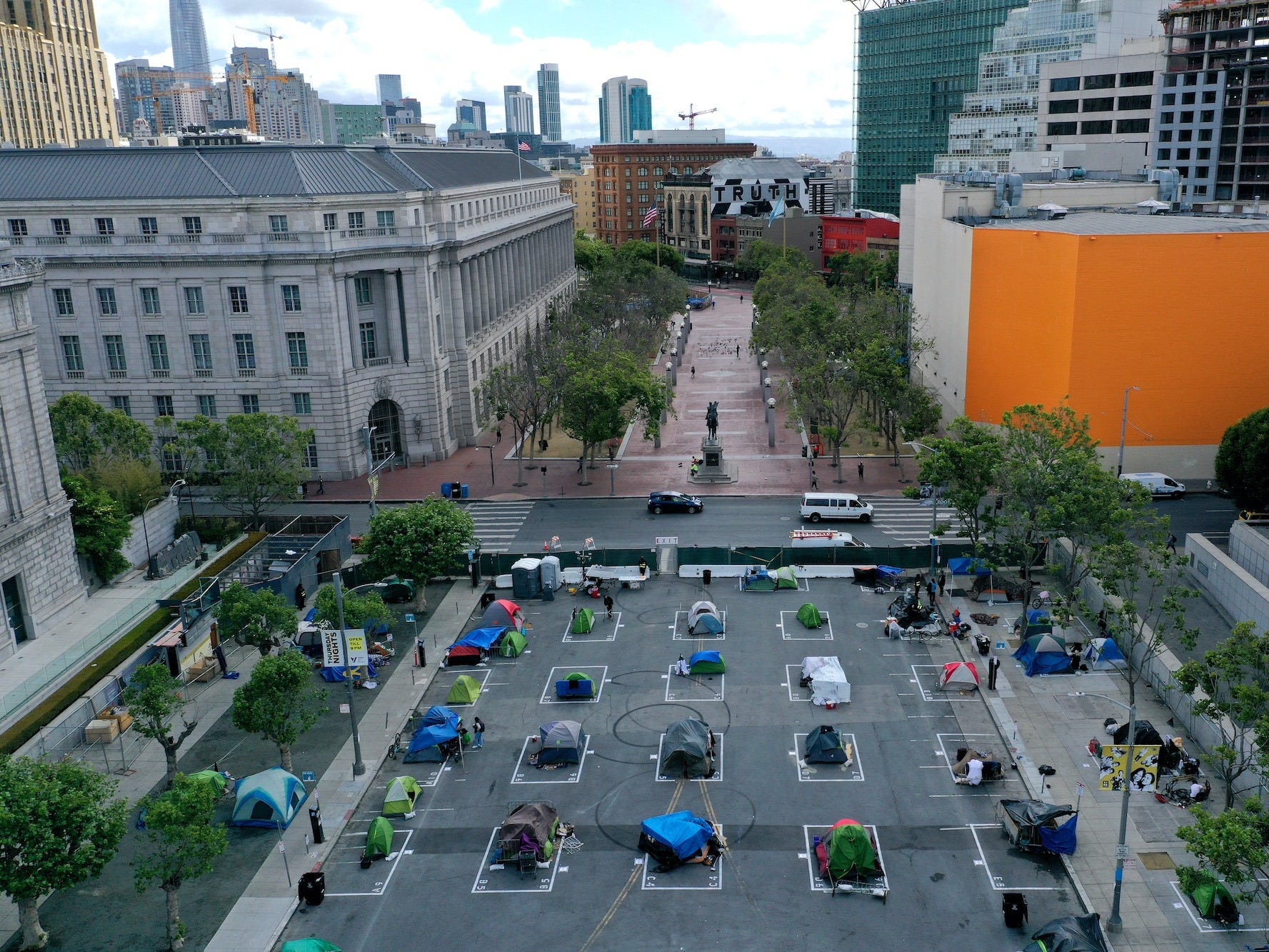 Other parts of the US authorizing encampments include Portland, Oregon, and Phoenix, Arizona, as the AP reported.

San Francisco’s Recreation and Park Department is also now finding more open spaces, such as parking lots and parks, to serve as locations for more tent campsites, according to the Chronicle.

Tents are usually set up on footpaths, and as retailers and restaurants move forward with a phased reopening plan, that outdoor space could prove vital to the health of their business, according to the AP.

This is one of the latest measures that San Francisco has taken in an attempt to protect its homeless population. 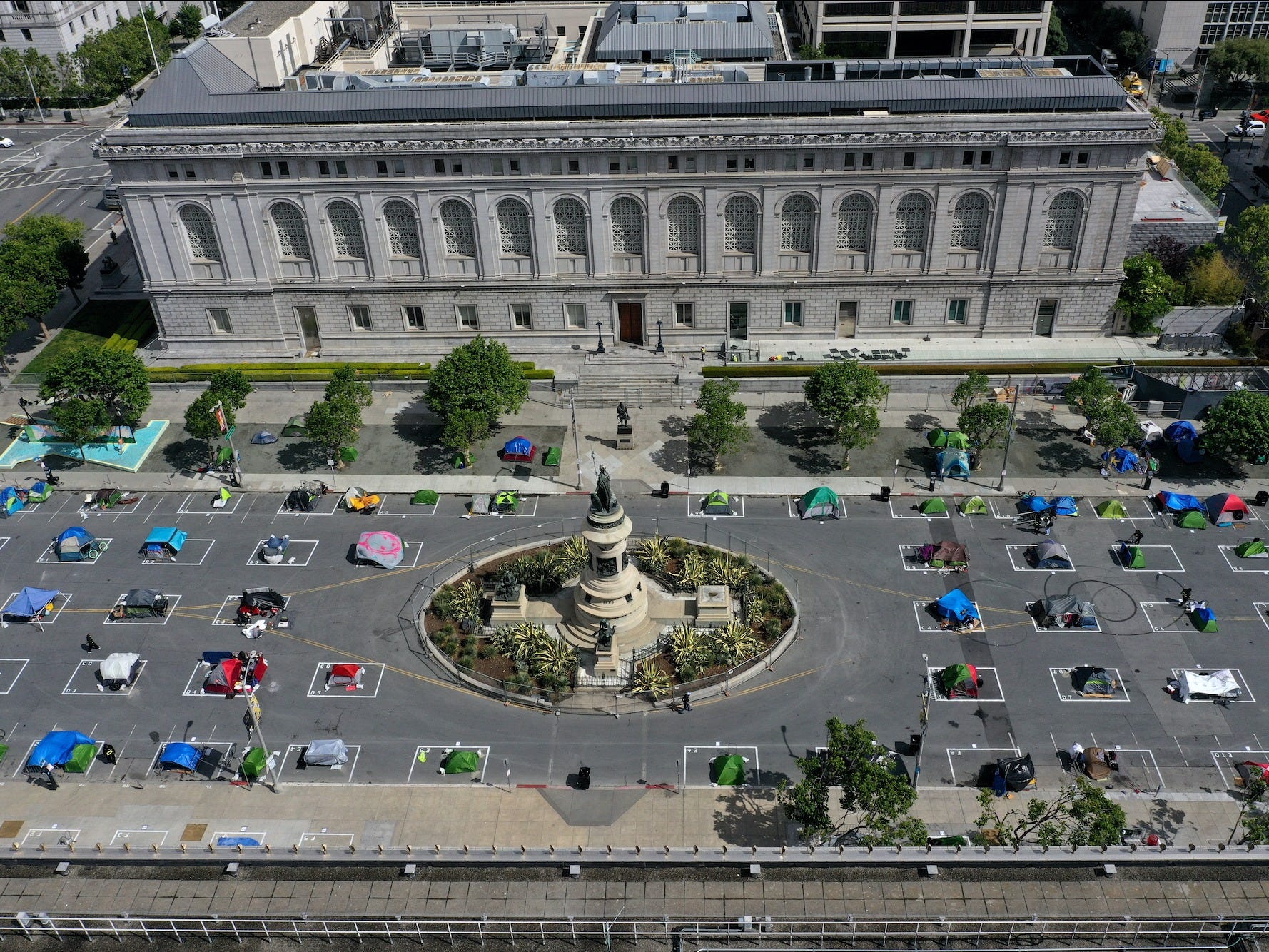 Homelessness advocates have been urging officials for months to turn to the thousands of hotel rooms in the city – rendered empty by the crushing loss of tourism – to house its entire homeless population as a preventive measure.

The Board of Supervisors unanimously voted for an emergency ordinance pressing for Mayor London Breed to do so in mid-April, but the plan was never carried out as intended.