Salesforce.com rising star Jody Kohner has an interesting attitude toward the company’s new partnership with its former rival, Microsoft.

“This is literally a killer partnership,” she told sales trainees at a recent training event, attended by Inc. journalist David Whitford. “Like, ‘We’re gonna wrap our arms around Microsoft. We’re gonna pretend like we’re a boa constrictor. And we’re gonna suck the life out of them.'”

The two companies have been rivals for decades under former Microsoft CEO Steve Ballmer’s reign. They compete head-to-head over software for salespeople, known as Customer Relationship Management (CRM) software. That’s the flagship product for Salesforce.com.

But under new CEO Satya Nadella’s kinder, gentler Microsoft, Salesforce.com CEO Marc Benioff and Nadella seemingly buried the hatchet in May. They announced a new partnership where Salesforce.com would build an app for Windows phone and integrate its CRM software with Microsoft Office.

Benioff even mentioned Microsoft 12 times during his quarterly conference call with Wall Street analysts and investors, talking about how the two companies have become close and how Microsoft has become a big Salesforce.com customer. He even dropped a mysterious hint that Salesforce.com is now “more involved” with Microsoft’s database product SQL Server “than ever before.”

Salesforce.com — which launched from a conversation with Oracle CEO Larry Ellison and got seed funding from him — is a huge Oracle customer. But as the competitive antagonism between Oracle and Salesforce.com has grown over the years, Salesforce.com has suggested it might one day ditch Oracle, or at least reduce its reliance on it.

Benioff said on that call:

As you know we have an incredible situation with Microsoft, who has become I believe our largest customer of our Marketing Cloud. They have built an incredible new product that they have, called Office 365 right onto the marketing cloud. They use Journey Builder to guide their customers through their journeys and it’s brought Microsoft and Salesforce closer together. We’ve got more involved with SQL Server than ever before and we’re looking to unite our products more closely than ever before and you’re going to see some incredible things at Dreamforce with Salesforce and Microsoft Office and the new version of Salesforce1, which is coming to Dreamforce. And I’ll tell you, it’s a great partnership for our customers. They could not be more excited.

During the new hire sales boot camp training attended by Inc.’s Whitford, she was rallying the troops by saying:

This, by the way, is not a sanctioned opinion by the PR team for Salesforce.com, who gave us this statement:

We deeply value our partnership with Microsoft and the comments from one of our sales team in the Inc article do not accurately represent our alliance. The partnership between Microsoft and Salesforce.com is a reflection of both companies’ commitments to putting the customer first.

Microsoft, for its part, isn’t shaking in its boots. A spokeswoman told Whitford the partnership is all about “delivering great benefits to our customers.” (We also reached out to Microsoft for comment and will update when we hear back.)

But the new sales recruits Kohner was training ate it up. Salesforce shared speaker feedback results with Whitford, who writes,”Kohner won speaker of the week, no surprise, scoring a nearly perfect 4.9 out of 5.” 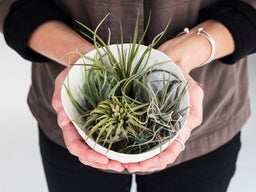 How to grow and care for air plants

The IMF is predicting more pain for global stocks as central...

Dolly Parton denies rumor that her breasts are insured for millions...