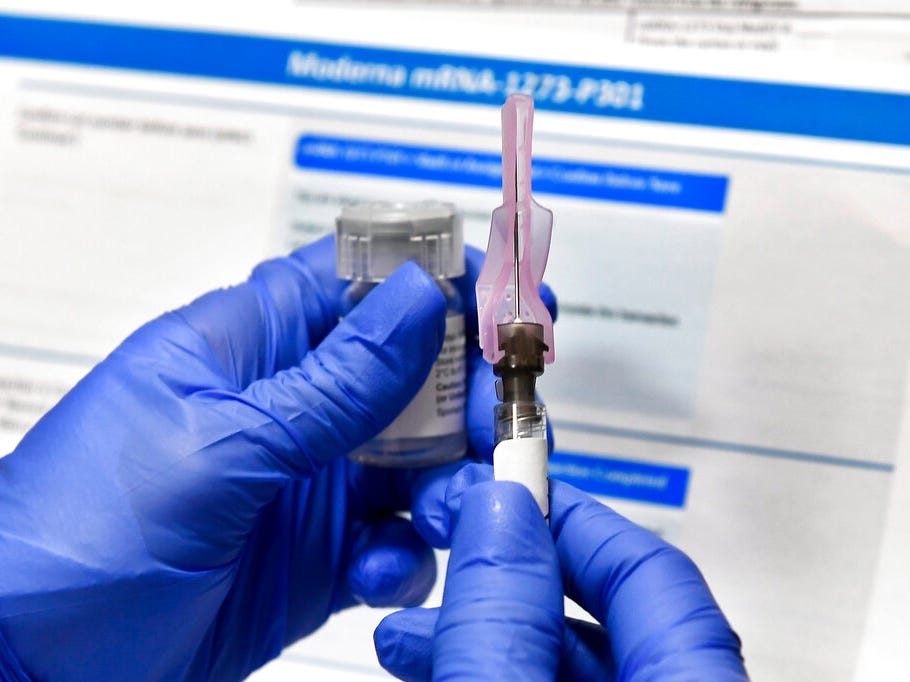 US regulators authorised Moderna’s coronavirus vaccine on Friday for emergency use, concluding there are no major safety concerns with the new vaccine.

But that doesn’t mean the two-dose vaccine is side-effect free. More than nine in 10 people who got Moderna’s shot registered some side effects, which were mostly mild or moderate in severity and lasted one to three days after an injection.

A 53-page briefing document on Moderna’s vaccine released Tuesday by the US Food and Drug Administration gave us the most detailed look yet at how safe and effective the shot is.

Most of these are commonly expected with vaccines, related to the shot generating an immune response in the body. On the whole, these reactions were unpleasant but not threatening.

The most common side effects were:

It’s tricky to directly compare Moderna’s candidate to Pfizer’s vaccine, which won an emergency OK from the US Food and Drug Administration on December 11.

The two clinical trials followed different protocols and split up their participants differently. For instance, Pfizer’s study divided results by age into two buckets: older and younger than 55. While setting the two studies side by side is like comparing apples and oranges, it appears that Moderna’s shot carried more common and severe side effects than Pfizer’s.

These massive clinical trials â€” each enrolling tens of thousands of people â€” found both vaccines to be overwhelmingly protective against COVID-19. Pfizer’s shot is 95% effective, and Moderna’s shot is 94% effective. It’s not clear if either vaccine prevents transmission of the virus, and it’s unknown how long-lasting that protection will be.


Read more:
Moderna’s ambitions of pumping out up to 1 billion doses of a coronavirus vaccine rest on a former Polaroid factory that’s never produced an approved drug

Even though most of the reported side effects were mild or moderate, there were severe reactions among participants.

16.5% of those who got Moderna’s vaccine reported severe side effects compared to 3.7% on placebo. These consisted of either reactions at the injection site, like pain or swelling, or systemic reactions to the vaccine, like fever, headache, fatigue, nausea, and vomiting. For these people, the reactions were strong enough to hinder daily living activities. These were still expected, and the reactions to the shots were typically fleeting.

About 4% had reactions related to the injected arm that lasted more than a week after an injection compared to 1% of the placebo group. Those arm-specific side effects were most commonly pain and swelling of the armpit’s lymph nodes.

Changes in the size and consistency of lymph nodes in the armpit was a common side effect that typically lasted one or two days. 10% of immunized volunteers reported the side effect after the first dose (compared to 5% on placebo), and 14% noted it after the second booster shot (compared to 4% of the placebo group).

Bell’s palsy relationship ‘cannot be ruled out’ at this time, FDA says

The FDA also noted some side effects that could be associated with the vaccine. But these side effects were very rare, making it too difficult to tell if they actually are related to Moderna’s shot or are a product of random chance.

Three people who got Moderna’s vaccine subsequently developed Bell’s palsy, a condition of weakening facial muscles that is typically temporary, compared to one person getting the sham injections.

One of those Bell’s palsy cases was severe: a 67-year-old woman with diabetes “was hospitalized with a stroke due to new facial paralysis 32 days after vaccination,” the FDA’s report stated. “This case was reported as resolving.”

“Currently available information is insufficient to determine a causal relationship with the vaccine,” the FDA wrote in its briefing documents on Bell’s palsy cases.

The agency scientists said a relationship with the vaccine and Bell’s palsy “cannot be ruled out” and should be monitored closely if the vaccine is rolled out to the general public.

Moderna’s detailed data adds onto a similar report released last week on Pfizer’s vaccine. Both shots are messenger RNA vaccines, a new technology platform that has never before been used in a federally approved vaccine or therapeutic.

Pfizer’s study had four cases of Bell’s palsy in the vaccine group, compared to none in the placebo group. Combining the two studies, nearly 40,000 people have gotten both doses of either Moderna’s or Pfizer’s vaccine â€” seven developed Bell’s palsy, a frequency of less than 0.1%.

Younger people had stronger reactions to the shot

Overall, side effects were more common and more severe in the younger population, which Moderna’s study defined as those under the age of 65.

FDA scientists also said the safety profile of Moderna’s shot was generally similar across genders, races, and ethnicities. Younger people recorded more temporary and expected side effects from the vaccine, like fatigue and headache.

Take pain at injection site, for instance. The FDA noted the highest rates were seen in this younger group of volunteers, with nine in 10 reporting pain and 4.6% reporting severe levels of pain. Typically, this pain lasted for two or three days after an injection.


Read more:
Inside Moderna’s historic coronavirus vaccine program that transformed the biotech upstart into a $US57 billion drug industry powerhouse