Ryan Newman's terrifying Daytona 500 crash is being compared to the one that killed Dale Earnhardt, and some say the safety rules it spurred may have saved Newman's life 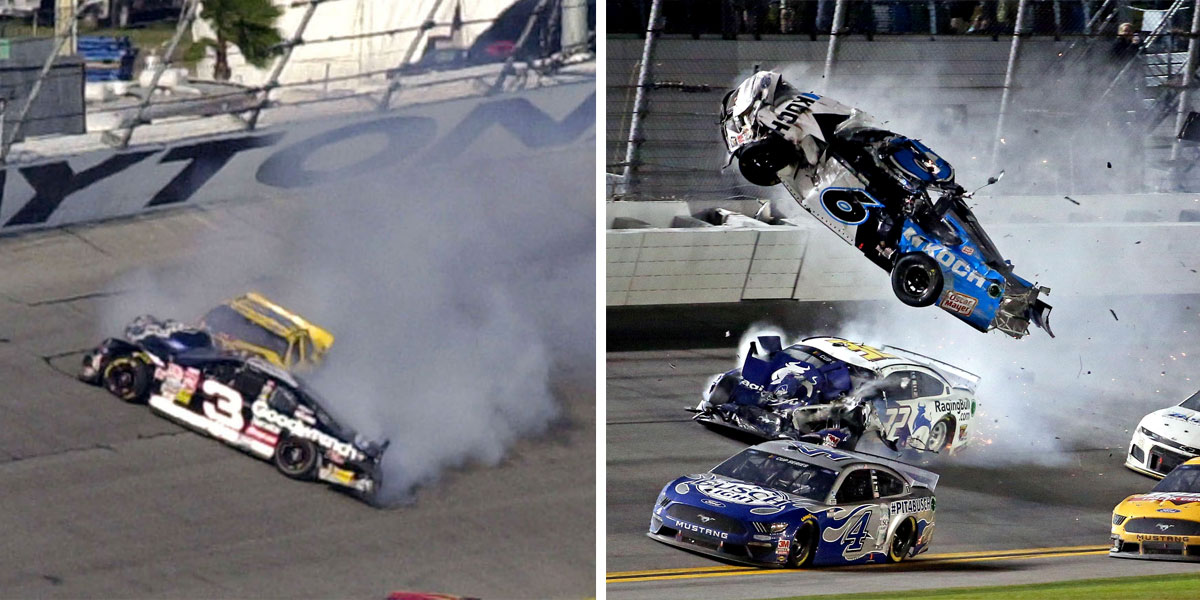 The NASCAR driver Ryan Newman was hospitalized and in “serious condition” following a devastating wreck during the final lap of the Daytona 500 on Monday night in which his car spun out at 190 mph, flipped, and landed on its roof.

The scene reminded racing fans of a similarly scary crash responsible for a NASCAR legend’s untimely death 19 years earlier at the same race.

On February 18, 2001, Dale Earnhardt was killed in a crash during the last lap of the 43rd Daytona 500. Ken Schrader collided with the passenger side of Earnhardt’s black No. 3 Chevrolet and sent “The Intimidator” into the wall.

Earnhardt was transported to the hospital and pronounced dead from head injuries. The tragedy prompted NASCAR officials to tighten safety regulations.

NASCAR announced on Monday night that Newman was expected to survive the wreck. And while the racing company has not released details about the extent of the 42-year-old driver’s injuries or exactly how he sustained them, many fans have speculated that the more stringent safety rules after Earnhardt’s death were responsible for saving Newman’s life.

Add Ryan Newman to the endless names of drivers who Dale Earnhardt saved. The Intimidator kicked ass on the track but one could argue his greatest legacy is the safety enhancements that came around because of his tragic death. (Photo by USA Today Sports) pic.twitter.com/eUuT9c0UQJ

A lot of things and people saved Ryan Newman tonight.

One is the man who died 19 years ago tomorrow. The advances in safety made since Dale Earnhardt's death have been profound. pic.twitter.com/5hrCtwt2bf

Dale Earnhardt died 19 years ago today but he saved Ryan Newman last night and many other drivers since 2001.

That's what he should be remembered most for. pic.twitter.com/Pa826owfSS

Because of the safety changes made after we lost Dale 19 years ago today, Ryan Newman will survive the worst crash ever today. Pray we have more good news about Ryan tomorrow, as his injuries are serious. ???? #RyanJNewman #DaleEarnhardt pic.twitter.com/68tjuZWtKB

Arguably the most significant change NASCAR made in the wake of Earnhardt’s death was implementing “head and neck support” devices in every car.

The apparatus, which became mandatory eight months after Earnhardt’s fatal crash, is “a carbon-fibre and Kevlar collar with two tethers that connect to the driver’s helmet,” designed to secure the driver’s head and prevent it from moving independently of their body,per Popular Mechanics.

NASCAR’s top series has not seen a crash-related death since mandating the use of the device – and given the force of Monday’s accident, it’s possible it helped save Newman’s life.

As is common after a serious accident, NASCAR took Newman’s and his fellow driver Corey LaJoie’s cars to its Research and Development Centre to examine them, per Fox 46’s Brett Baldeck.

In its update on Newman’s condition on Monday night, NASCAR said he was at Halifax Health Medical Centre in Florida with injuries that were “not life threatening.”