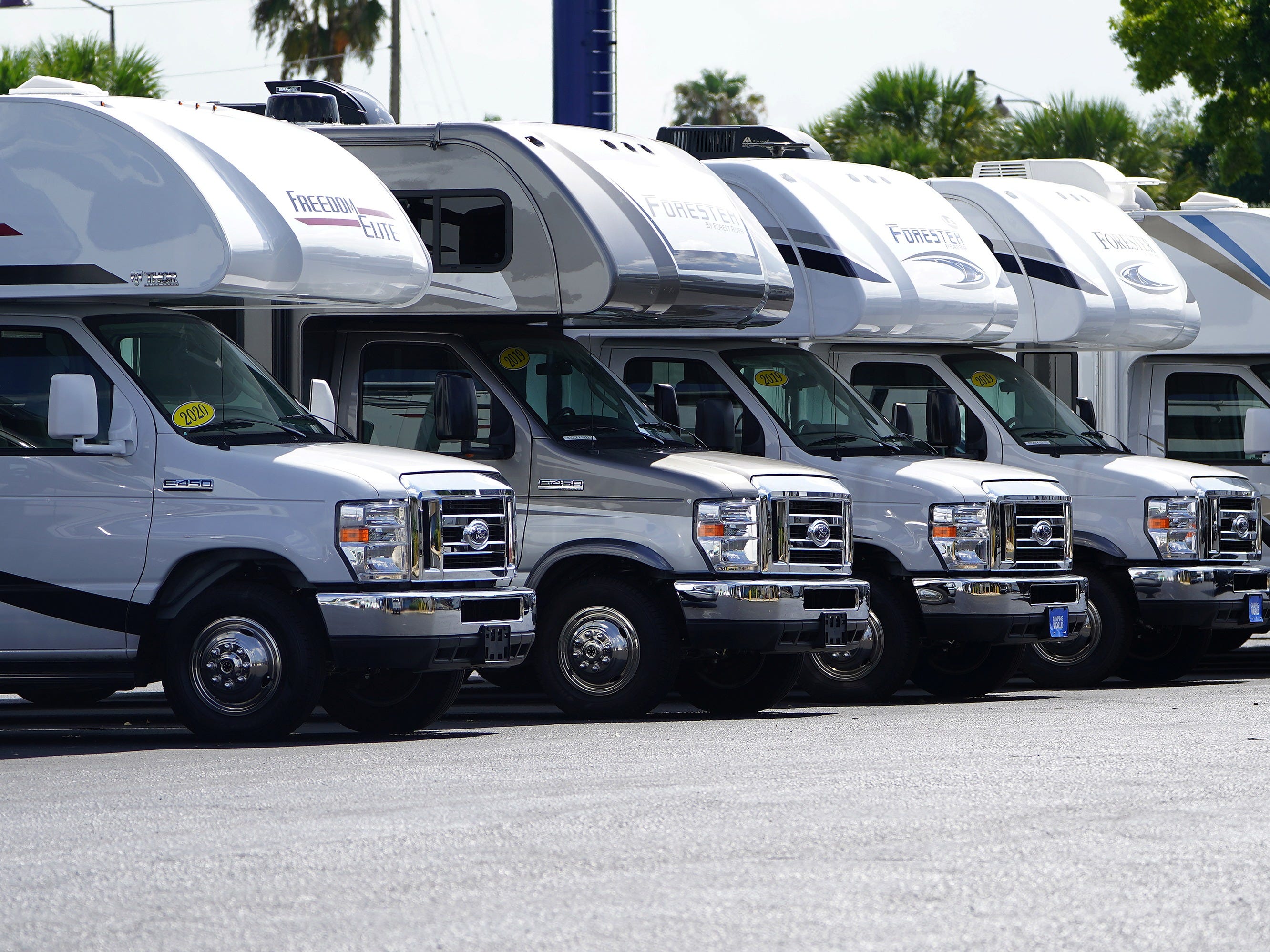 RVs are becoming the go-to vacation for many Americans coming out of lockdown.

Dealers have been seeing a spike in purchases now that summer is coming and states are slowly starting to lift stay-at–home restrictions.

According to a study conducted by Kampgrounds of America (KOA), which runs a series of privately owned campgrounds, 34% of prospective US and Canada-based campers say that road trips will be the safest form of travel when stay-at-home orders have been lifted. This increasing interest in road trips may also lead to 46 million Americans will take an RV trip in the next year, according to the RV Industry Association.

The RV Industry Association also found that 20% of US residents surveyed have become more interested in RV travel than flying, tent camping, cruises, and rental stays rental amid coronavirus concerns. This jump in RV interest is already being reflected in the rental space.

RV sales are skyrocketing – and not slowing down. 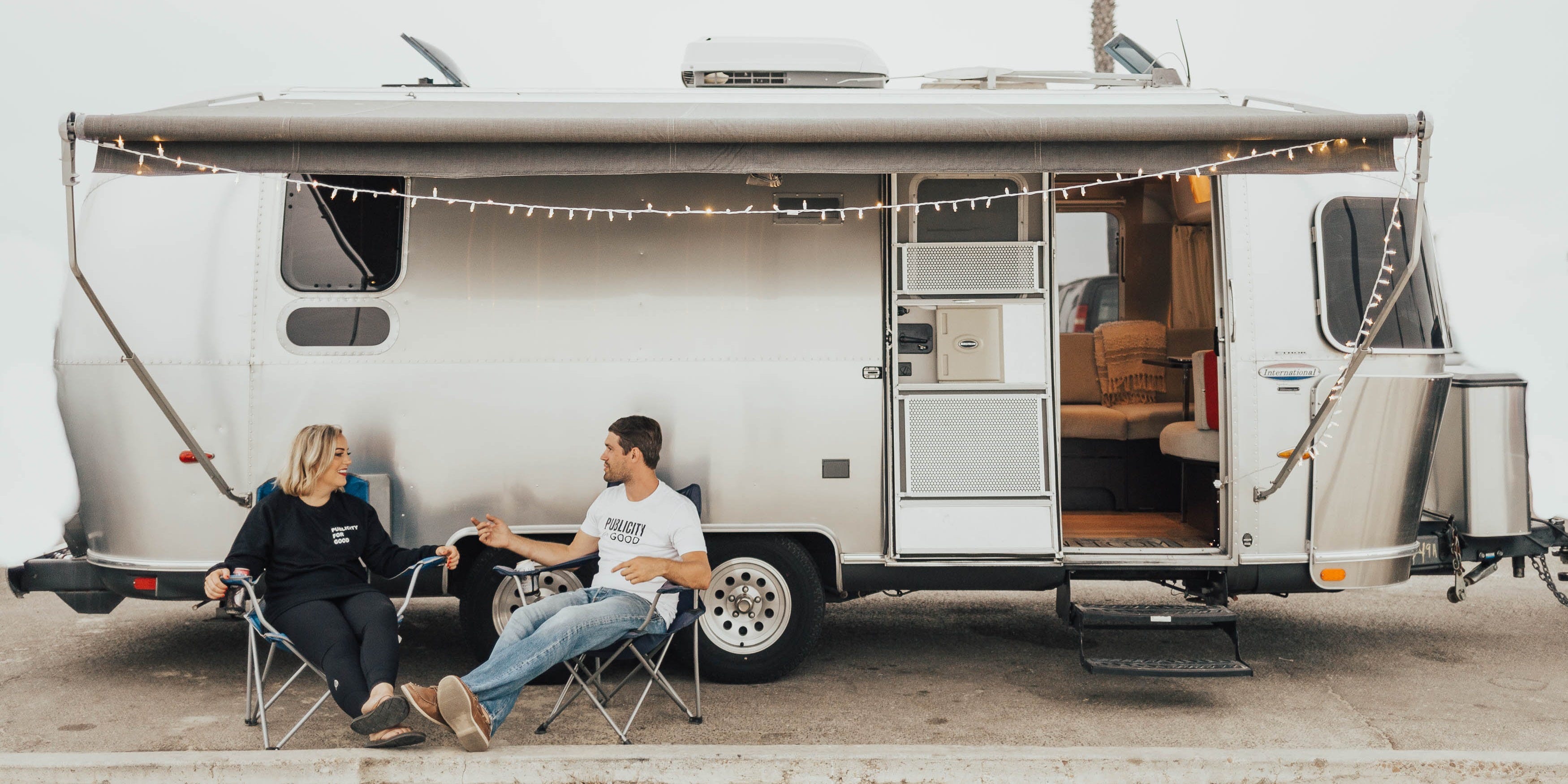 South of Indigo PhotographyHeather DeSantis and her fiance in front of their Airstream.

A Thor Industries study recently found that 40% of people in its survey will use their RVs as often as usual, while 39% of people said they would be using their vehicles more often this year.

The study also found that 78% of potential RVers will purchase a build this year, while 18% of current RV owners will also be purchasing another build.

“I think we’re going to see a lot more demand,” RVshare CEO Jon Grey told Business Insider. “I think you’re now getting a new group of people buying them, which has people who are substituting it for more luxurious vacations that they typically took.”

Thor Industries itself – which owns several RV brands such as Jayco, Keystone RV Company, and Dutchmen – has seen an upwards trend in RV sales during the course of this month.

“It may not be consistent in every state over last year, and there are still some states that are shut-in, but we saw significant traction starting two to three weeks ago with new customers who really hadn’t considered the RV lifestyle coming out,” Thor Industries’ president and CEO Robert Martin told Business Insider. “The retail numbers aren’t out yet but we’re getting a sense from talking to dealers that many are … quite optimistic about the rest of the year.”

Thor Industries also noticed that its dealers’ web traffic had been spiking throughout the time of stay-at-home orders, which likely indicates that many people were researching and considering possible RV builds for the summer now that other travel options – such as flying or international travel – are no longer being considered, according to Martin.

The new interest is now being directly reflected in growing sales at RV companies like Airstreamand Marathon Coach. 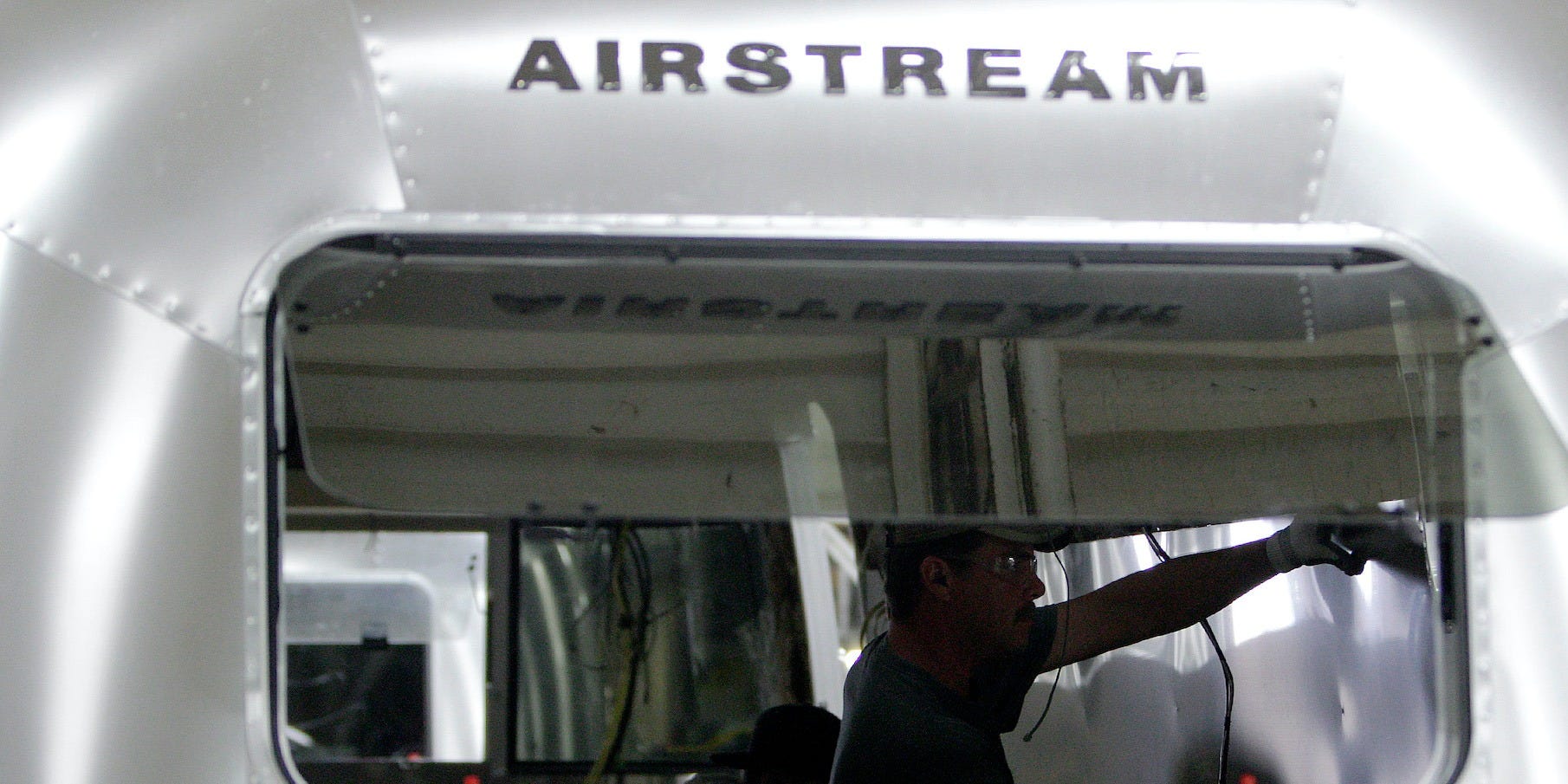 Airstream, which is also a part of Thor Industries, originally predicted that sales would be down 70% in April amid stay-at-home orders. Instead, sales only dropped around 30%, according to Airstream CEO Bob Wheeler.

Wheeler attributes this lack of extreme drop in sales to dealers’ decisions to pivot to remote and virtual RV showings, which successfully contributed to sales even amid stay-at-home orders.

By the next month, Airstream saw an 11% increase in sales between May 1 and May 21 compared to the same period last year, which was also a high performing month for the company, according to Wheeler.

“Since we came back in May, sales have literally been through the roof, well beyond what we think was just pent up demand from the month of April,” Wheeler told Business Insider. “Orders continue to come in and retails continue to happen at a very brisk pace, so there’s something going on here that it’s beyond just a bit of pent up demand.”

Marathon Coach has also been seeing an increasing demand for its RVs as more people have begun to adjust to the “new normal.” Now, the company predicts its sales will be 30% higher this year compared to last year, according to Marathon Coach president and owner Steve Schoellhorn.

However, this rise in sales numbers doesn’t come as too much of a surprise to Schoellhorn.

Early on the pandemic, Schoellhorn was both concerned yet “cautiously optimistic” about the business, predicting if the lockdown only lasted a few months, Marathon would still have a chance to “have a really good year.”

“I was calling and emailing customers that I have a personal relationship with and immediately I was getting feedback that they were going to spend a lot more time RVing and not go on cruises or travel internationally anytime in the foreseeable future,,” Schoellhorn told Business Insider.

The rise in Marathon’s sales isn’t location-specific: all three of its locations (Oregon, Texas, and Florida) have seen increasing sales.

Non-brand specific dealers have also been positively impacted by this increase in sales: Camping World’s stock climbed 35% early May, surpassing analyst predictions, due to a strong first quarter of RV sales, Bloomberg reported. 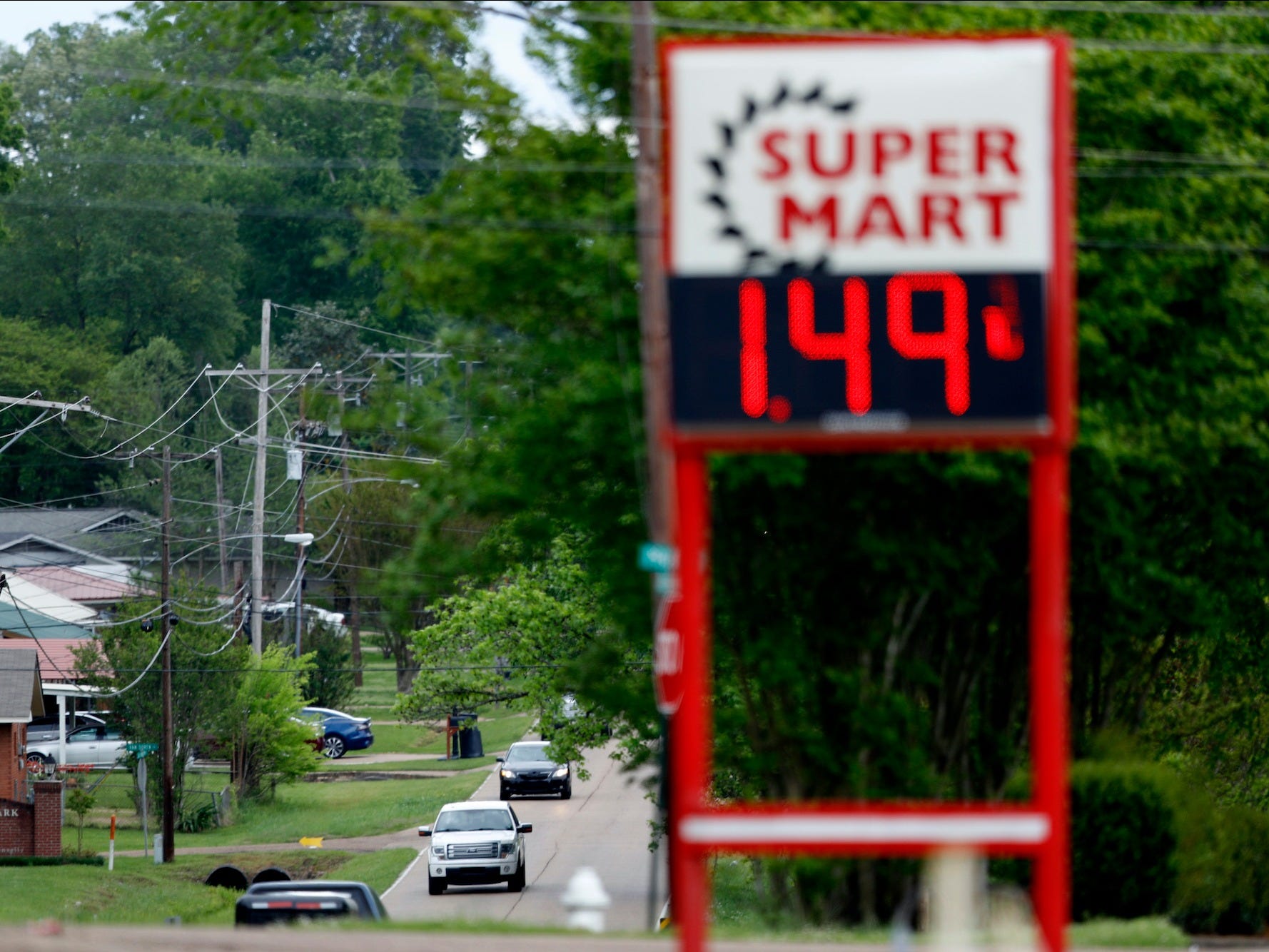 Julio Cortez/ReutersGas prices at a gas station in Pearl, Mississippi on March 31.

“When fuel prices are high or low, it does affect the lower level priced RVs more,” Schoellhorn said. “When there’s more people coming in when prices are low, that tends to, over a five or 10 year period, have a trickle up effect.”

This includes not only the basics of social distancing and cleanliness but also changes to the process of selling its RVs.

“I think we’re going to have to continue to sell coaches remotely because people still aren’t going to be anxious to hop on a plane to go look at a coach, so we may have to bring it to them if we have a tentative deal,” Schoellhorn said. “And obviously continue the video conferencing and video walkthroughs of coaches.”

The video tour method has allowed Marathon – and Airstream, which adopted a similar strategy – to sell builds even as the economy was spiraling downwards.

Airstream has been struggling to keep up with customer orders. 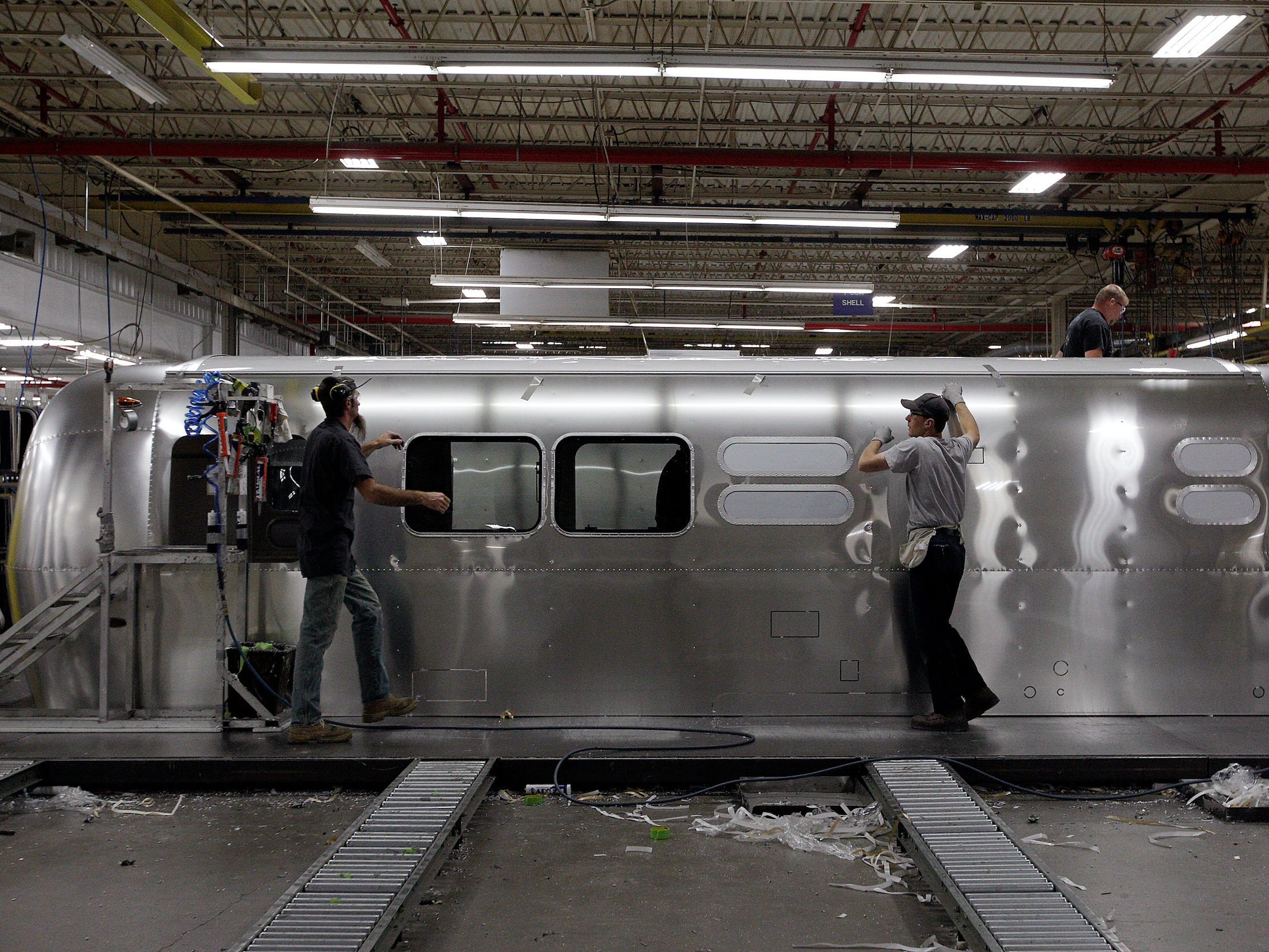 According to Wheeler, Airstream is now behind market demand because its factories had to shut down while retailers were still successfully selling builds. However, Wheeler isn’t concerned about meeting these ever-increasing demands.

“The thing about the RV industry is that it’s very scalable,” Wheeler said. “It’s a matter of bringing people back into the workforce, so we’ll get there.”

In order to keep the return of manufacturing safe, Thor Industries and Airstream has implemented several precautionary measures for its workers. This includes taking the temperature of all of its employees when they arrive at work, staggering work hours, observing social distancing in common areas, and fogging manufacturing facilities once a week.

“This could be just the beginning,” Martin said. “We’re pretty encouraged, and I’m happy [RVs] can be an outlet for many people that have been stuck in their home.

“Even if they’re not going far, they’re just getting a different change of scenery and enjoying the outdoors, and that’s just healthy for everybody,” Martin continued.