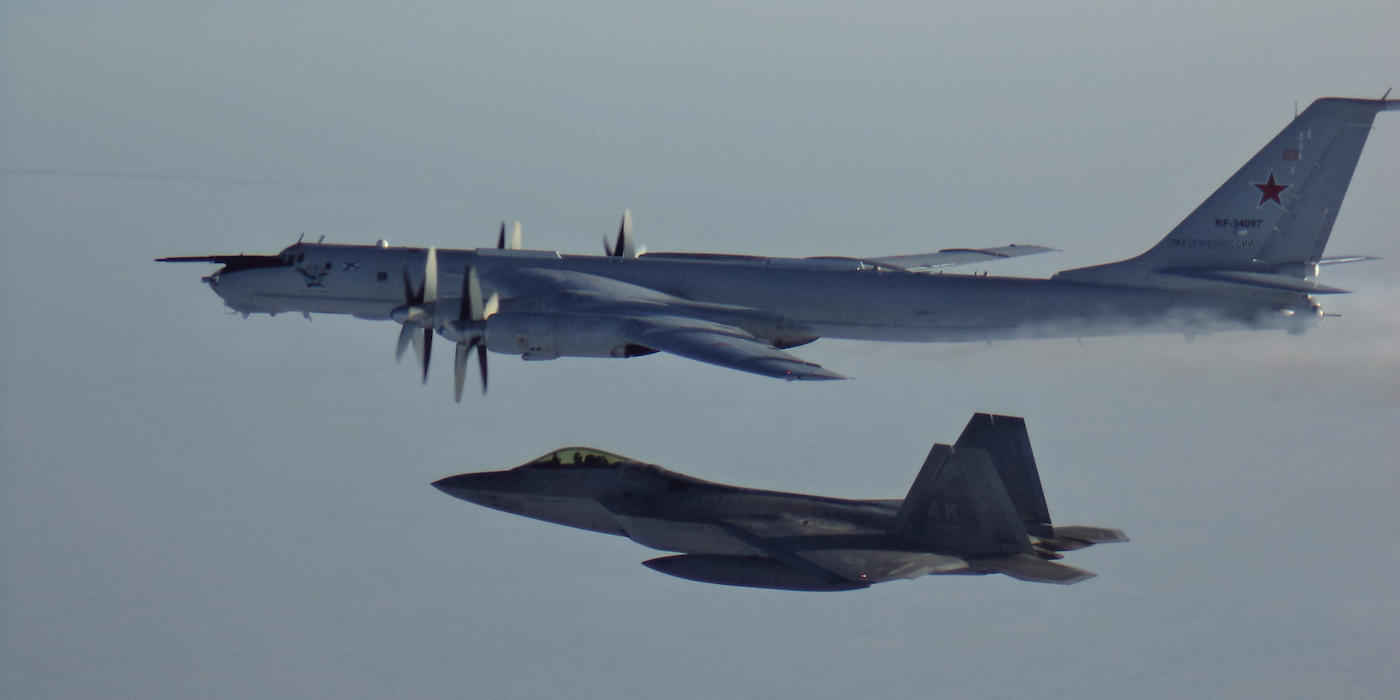 Two Russian Tu-142 maritime reconnaissance aircraft were intercepted by US and Canadian aircraft as they entered the Alaskan Air Defence Identification Zone off the coast of Alaska on Monday.

The Russian aircraft were in the ADIZ north of Alaska for about 4 hours, according to North American Aerospace Defence Command, which said the planes came as close as 50 nautical miles to the Alaskan coast but did not enter US or Canadian airspace. 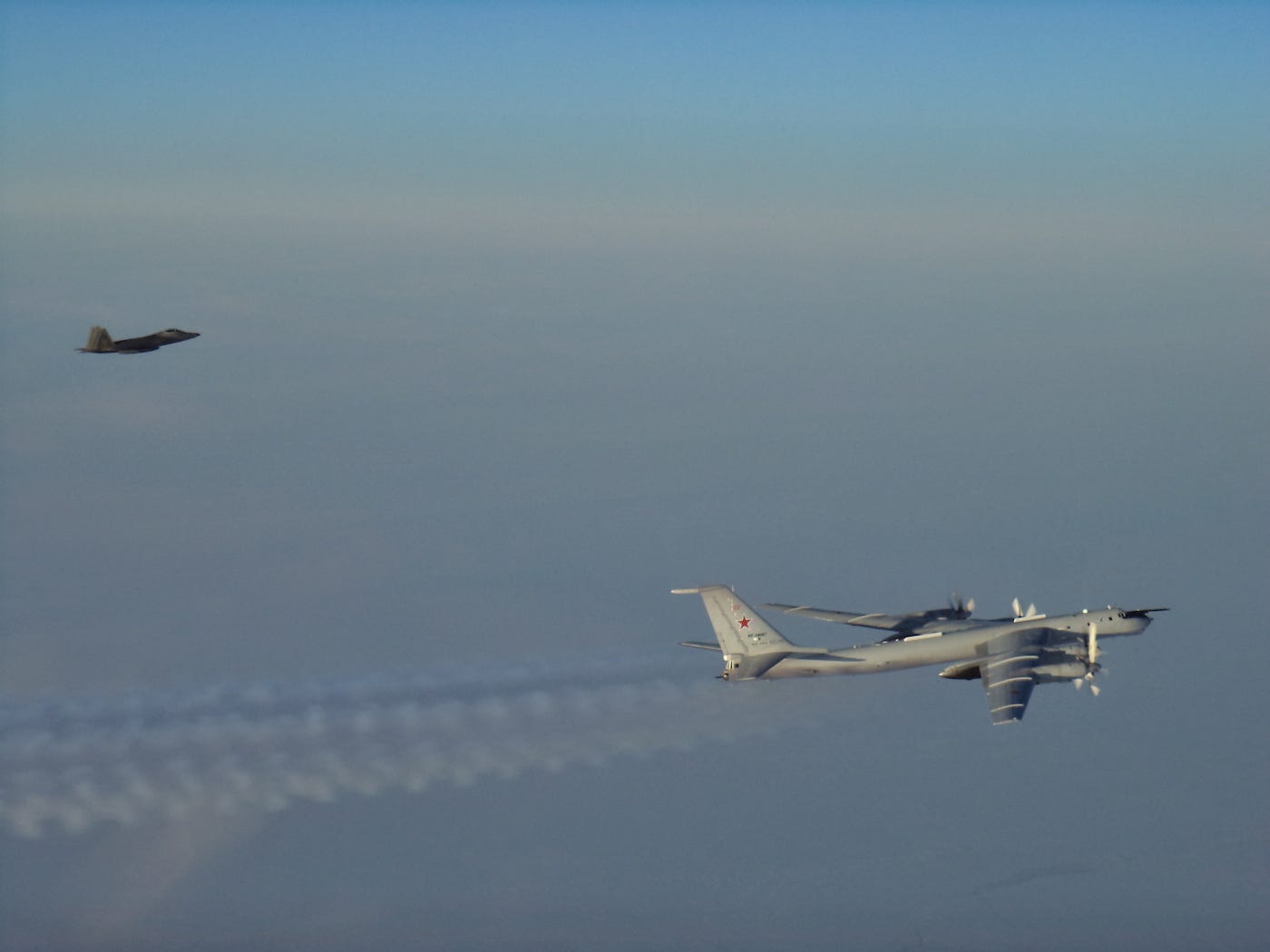 The Russian aircraft didn’t just cruise over open ocean, however. According to US officials, the reconnaissance planes and their escorts lingered over Camp Sea Dragon, which was set up on an ice floe by US Navy personnel for the Arctic submarine exercise ICEX 2020.

“We saw just yesterday … we had a Russian bomber 60 miles [sic] off the coast of Alaska, operating in one of our ICEX exercises we have where our subs actually pop up out of the ice,” Air Force Gen. Terrence J. O’Shaughnessy, head of US Northern Command, told the House Armed Services Committee on Wednesday.

“The camp established for that, they were loitering about 2,500 feet above that,” O’Shaughnessy said.

The video below, released by NORAD, shows the Russian aircraft over the camp with their US and Canadian minders.

Intercepts of Russian aircraft by US and Canadian planes over the Arctic happen regularly, but this incident underscored the need to monitor and respond in the region, O’Shaughnessy told lawmakers.

“They were loitering with an F-22 and an F-18 on their wing,” O’Shaughnessy said. “So we have to maintain the ability to be able to react appropriately not just for strategic messaging … but potentially in the future to actually defeat any threats.” 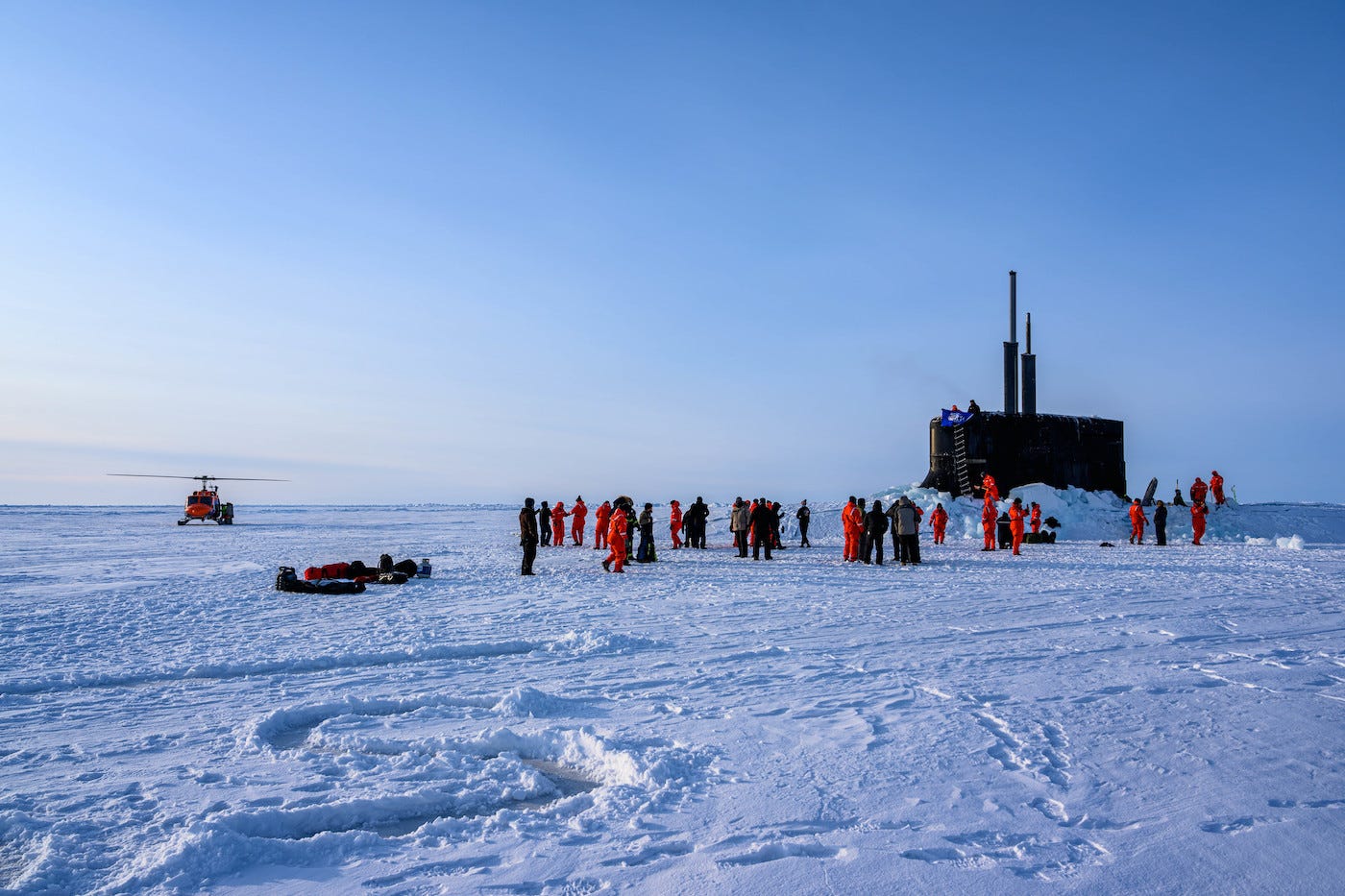 US Navy/MCS 1st Class Michael B. ZingaroThe crew of Seawolf-class fast-attack sub USS Connecticut on ice liberty after surfacing in the Arctic Circle during ICEX 2020, March 7, 2020

While the reasons for this flight are not known, such operations – by both the US and Russia – are sometimes meant to gather information about a country’s air-defence network and to map and collect signals intelligence, which inform an “order of battle” for potential use in the future, according to The Aviationist.

Those flights happen periodically as the electronic order of battle is changed frequently for operational security.

In this case, the operation may have been doubly valuable, as the Russian reconnaissance aircraft could have been trying to gather electronic intelligence on the US subs – Seawolf-class fast-attack sub USS Connecticut and Los Angeles-class fast-attack sub USS Toledo – that are taking part in ICEX, a three-week-long exercise featuring multiple Arctic transits, a North Pole surfacing, and other training.

Fast forwarding in the Arctic 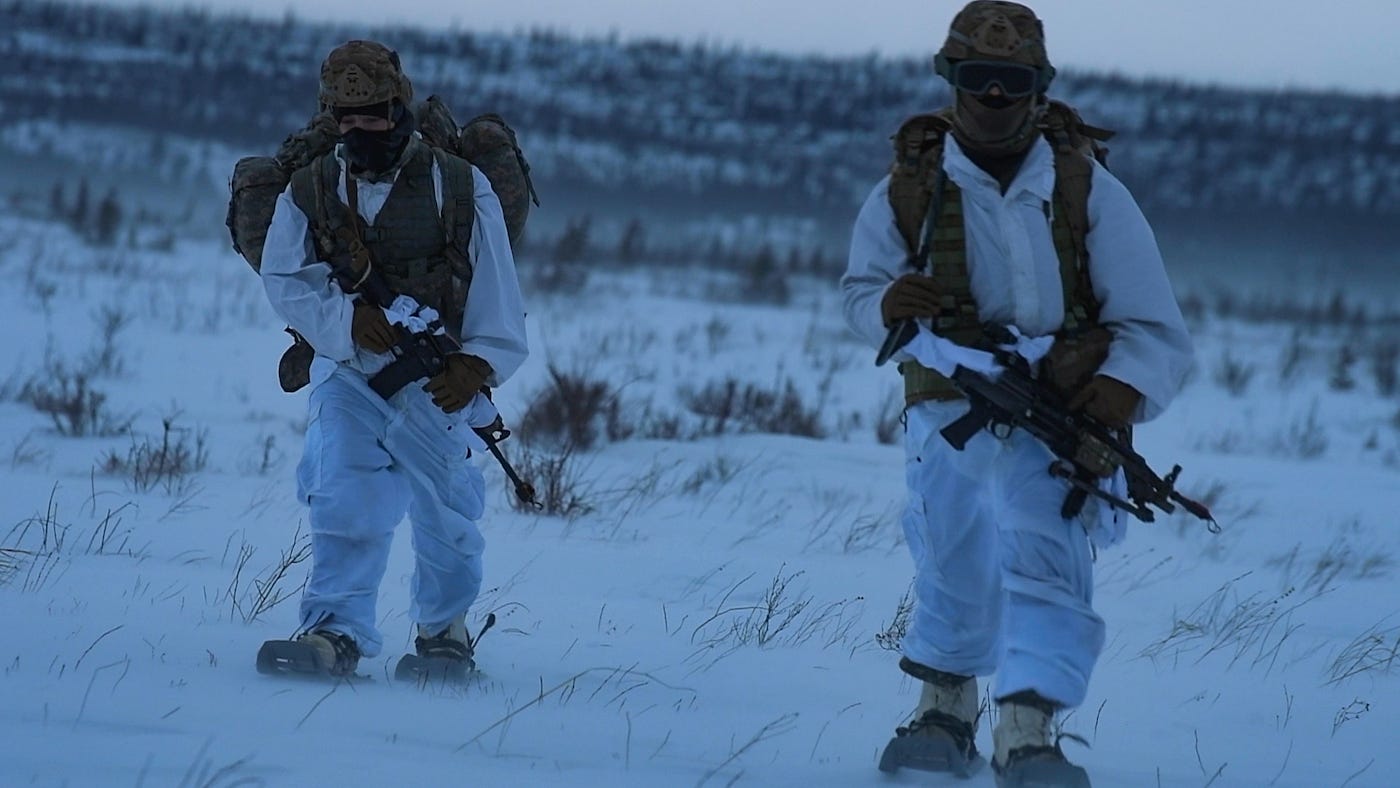 The Arctic has been a growing area of concern for the US military.

The Marine Corps and Navy have spent more time in the European Arctic, with Marines deploying on rotations to Norway since 2017 and an aircraft carrier sailing above the Arctic Circle for the first time since the 1990s during the massive NATO exercise Trident Juncture in 2018.

Alaska already hosts US military bases, including Eielson Air Force Base, which will receive two squadrons of F-35s totalling 54 aircraft this year. Alaska Command also recently conducted Arctic Edge 20, a military exercise conducted under the authority of US Northern Command. About 1,000 US military personnel worked with members of the Canadian military, making it the largest joint exercise in Alaska this year.

Alaska’s location is strategically important, but the conditions up there are a challenge. “We need to be able to operate in that environment,” O’Shaughnessy told lawmakers Wednesday. 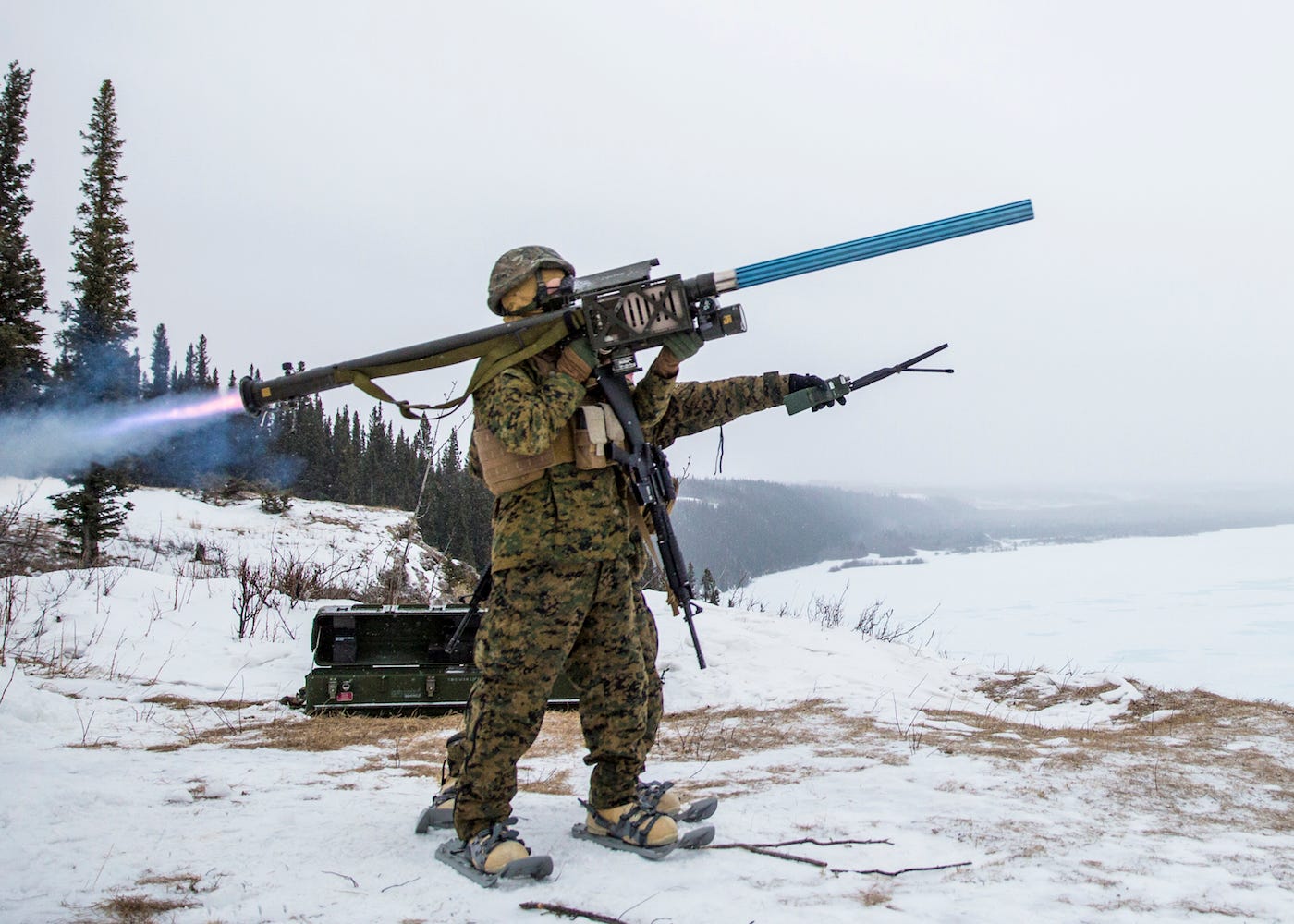 Northern Command has been working with service branches to improve training areas there, O’Shaughnessy said, but domain awareness – the ability to see what’s operating around you – also needs work.

Leveraging work being done in the commercial sector on communications using satellites in low-earth-orbit is number one on Northern Command’s unfunded priorities list, O’Shaughnessy said.

“We see amazing technology that’s going to bring, literally, broadband connectivity – the same that you would have in your home right now, you could actually establish within the Arctic very quickly, in a matter of literally a year or so.”

“That would actually fast forward our ability to operate within that very difficult, challenging battle space,” benefiting the military and civilian communities in the region, O’Shaughnessy said.