The ship carrying the ammonium nitrate that blew up in Beirut was abandoned in 2014 by a Russian businessman, who has said nothing since the explosion 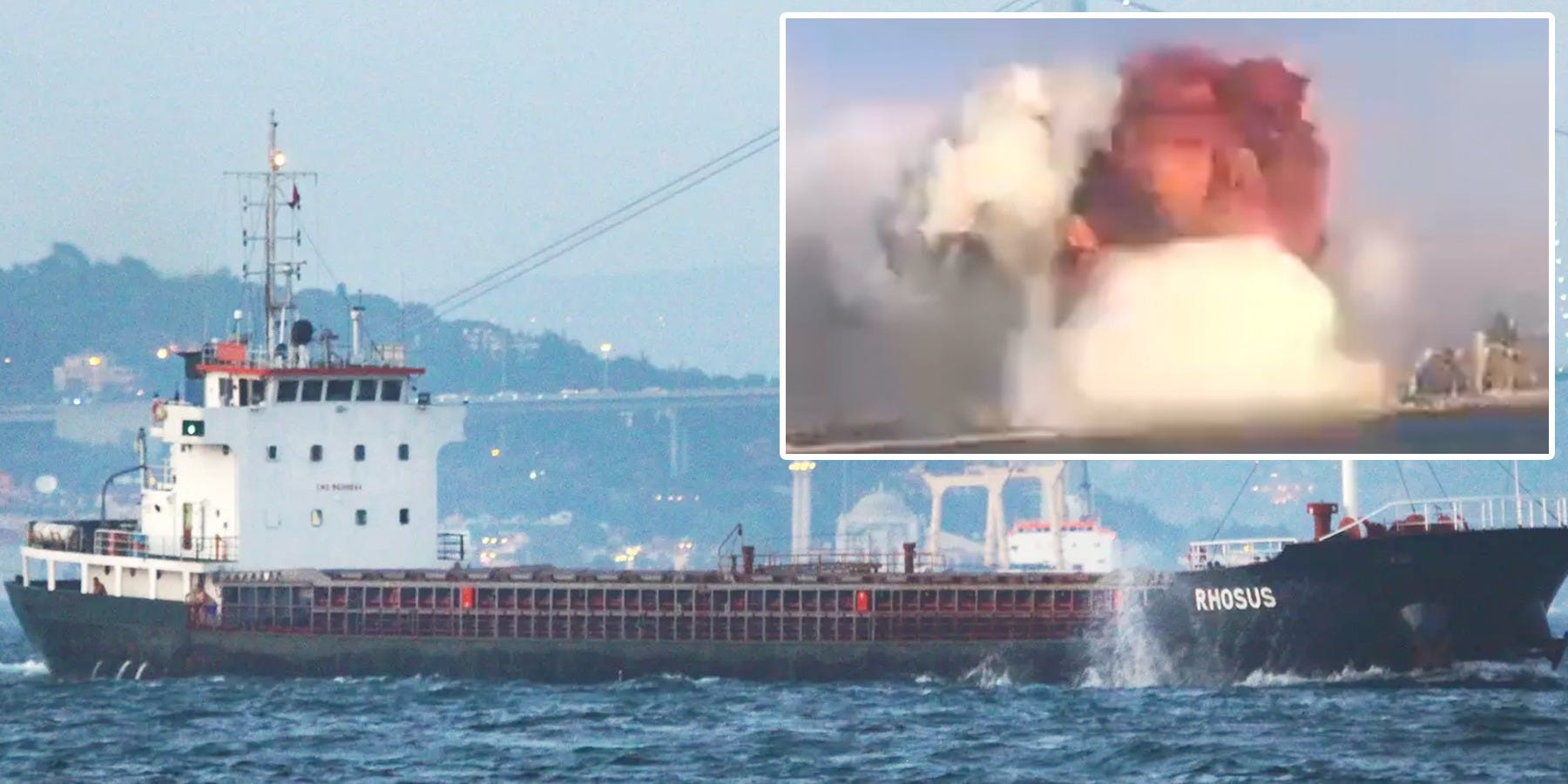 Hasenpusch/picture alliance via Getty Images/Business InsiderA 2010 stock image of the MV Rhosus cargo ship, overlaid with an image from a video posted on social media of the explosion in Beirut on Tuesday.

The cargo ship that brought 2,750 tons of ammonium nitrate to Beirut that exploded on Tuesday with devastating consequences was abandoned in 2014 by a Russian businessman now based in Cyprus, according to multiple reports.

The former captain of the MV Rhosus, Boris Prokoshev, identified Igor Grechushkin as the owner of the ship in an interview with the Russian edition of Radio Free Europe/Radio Liberty on Wednesday.

Business Insider was unable to reach Grechushkin for comment, and a LinkedIn profile with his name was inactive. CNN said its calls to him were unsuccessful.

As of Thursday morning, Grechushkin had not made any comment about the explosion, which killed at least 135 people and wounded 5,000 more people.

The Rhosus was meant to take the ammonium nitrate from Batumi in Georgia – the former Soviet nation on the Black Sea – to Mozambique.

But Prokoshev said that after the crew set sail, the journey was not deemed profitable enough. The Rhosus detoured to Beirut’s port in late 2013 to take on more machinery, which Prokoshev said was too heavy for the ship.

Google Maps/Business InsiderA map showing the ports of Batumi, Georgia, and Beira, Mozambique — the Rhosus’ intended route — and Beirut, where it took a detour and remained.

In Beirut, inspectors found the ship to be unseaworthy and barred it from sailing further. Some of the crew members were released, but Prokoshev said that he and three others were stuck there for 11 months.

“We weren’t paid a dime!” he said, according to a translation of the interview, adding that Grechushkin “didn’t even buy food for us.”

“We can say that he left us in a knowingly dangerous situation, doomed us to hunger,” he said.

Baroudi & Associates, the law firm representing the stranded seafarers, said in a statement Thursday that a claim lodged at Beirut Court for unpaid wages “was later dismissed for lack of jurisdiction.”

Prokoshev said Lebanese port officials took pity on the seafarers and fed them. After a prolonged legal battle, Grechushkin paid for the remaining crew members to be taken to Odesa, Ukraine, the former captain said.

But Grechushkin abandoned the vessel and its explosive cargo. The ammonium nitrate was moved into storage, where it stayed until it exploded on Tuesday, Business Insider reported.

Prokoshev, a Ukrainian, said he met Grechushkin in 2013. The Rhosus’ whole crew was changing, and Grechushkin did not mention that this was because of earlier “nonpayment of salaries,” Prokoshev alleged.

The Siberian Times on Wednesday published a photo it said was of Grechushkin, posing on a motorcycle. Business Insider was unable to verify whether the photo is genuine.

First pictures emerge of a Russian man whose ammonium nitrate cargo detonated in the port of Beirut. The 2,750 tonnes cargo of Khabarovsk-born businessman Igor Grechushkin was detained in Lebanon in 2013 https://t.co/hbu1VJgres pic.twitter.com/yQZqzcBIya

It’s unclear where Grechushkin is now.

Grechushkin is said to have had an office in the city of Limassol in Cyprus, the Cyprus Mail reported. The Cypriot interior ministry told the newspaper that he was not a Cyprus passport holder.

The police on the island said they had contacted Lebanon to offer assistance but had not heard back, the report said.