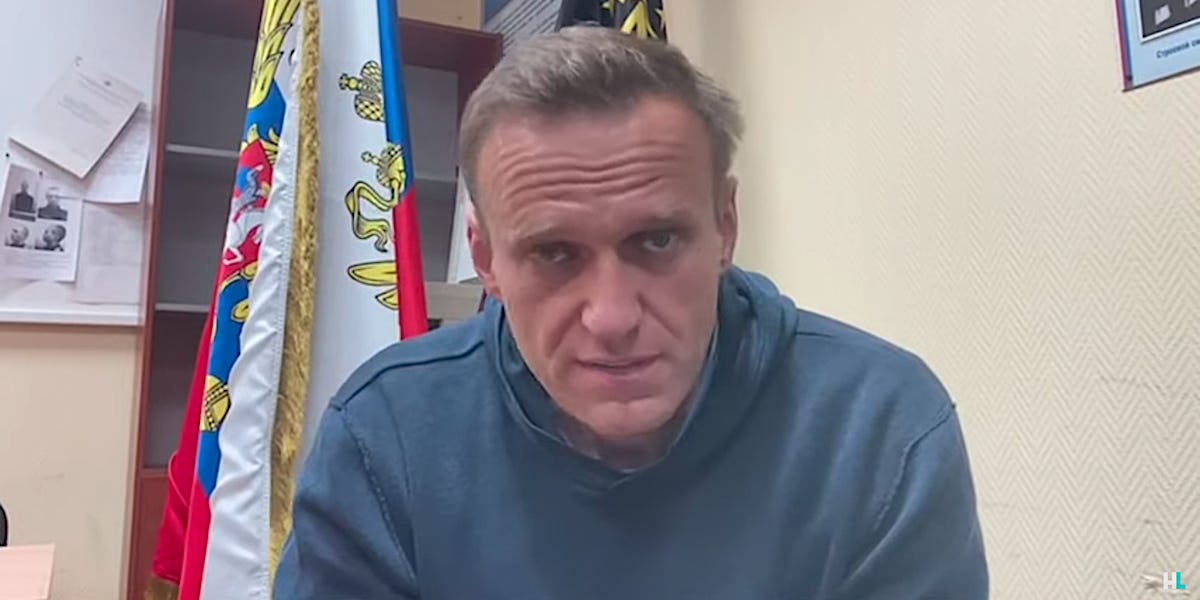 Navalny Live/YouTubeAlexei Navalny appears in a video published by his team on January 18, 2021.

A Moscow court on Wednesday outlawed Alexei Navalny’s political network by dubbing it extremist, in a remarkable escalation of Russian President Vladimir Putin’s war on dissent.

The ruling came just a week before a highly anticipated meeting between the Russian leader and President Joe Biden. It sends a clear message to Biden that his criticism of Russia over the treatment of Navalny and other dissidents won’t deter Putin’s campaign to crush his opponents.

As a result of the ruling and extremism designation, Navalny’s associates are barred from seeking public office – Russia has parliamentary elections in September – and could now be prosecuted and face prison time, per the Associated Press.

The ruling also comes less than a week after Putin signed a law barring members of “extremist” groups from running for office, which critics said was a blatant effort to squash legitimate competition and prevent Navalny’s allies from running in the upcoming elections. Putin signed the law on Friday, which was also Navalny’s 45th birthday.

Navalny’s political network, which primarily focused on investigating and exposing corruption, disbanded in late April in anticipation of the ruling.

Around that time, Russia’s financial watchdog Rosfinmonitoring blacklisted the network by labeling it extremist, putting it on a list alongside groups like ISIS and Al Qaeda. The lawyer representing the network, Ivan Pavlov, was also arrested in late April.

Navalny, who is Putin’s most prominent critic, nearly died after he was poisoned with the Soviet-era nerve agent Novichok in Siberia last August. The anti-corruption campaigner was subsequently taken to Germany for treatment, remaining there until January. He was promptly arrested upon his return to Moscow.

In February, Navalny was sentenced to two and a half years in prison for violating parole – including while he was being treated in Germany – from a 2014 embezzlement conviction that top rights groups denounced as politically motivated. Navalny has remained defiant and critical of Putin while imprisoned, releasing statements on social media via his law.

Responding to Wednesday’s ruling, Navalny in an Instagram post said, “When corruption is the basis of state power, fighters against corruption are labeled extremists.”

The Kremlin has ramped up arrests of critics in recent weeks, prompting at least one opposition politician to flee the country on Sunday.

Biden is expected to challenge Putin on these issues when they meet in Geneva on June 16, with US-Russia relations at a historically low point. The Biden administration in March slapped sanctions on Russian officials over Navalny’s poisoning, and both countries have engaged in an escalating diplomat tit-for-tat over the past few months.

Putin, whom according to the US intelligence community has coordinated interference in recent US elections, has strongly pushed against Biden’s criticism of his repressive tactics toward critics.

The Russian leader recently suggested it was hypocritical of the US to criticize Russia’s crackdown on dissent given hundreds of people who stormed the Capitol on January 6 are facing legal consequences. In remarks that echoed Republican efforts to whitewash the deadly insurrection, Putin last week said, “They weren’t just a crowd of robbers and rioters. Those people had come with political demands.”

Beyond Russia’s treatment of dissidents and election interference, Biden and Putin are also expected to clash on issues such as the ongoing war involving Kremlin-backed rebels in eastern Ukraine and cybersecurity concerns, among others.

As he arrived in the UK on Wednesday, Biden warned Putin the US will respond if he threatens other democracies.

“We are not seeking conflict with Russia. We want a stable, predictable relationship,” Biden said in remarks to US service members at RAF Mildenhall in England. “But I’ve been clear, the United States will respond in a robust and meaningful way when the Russian government engages in harmful activities.”