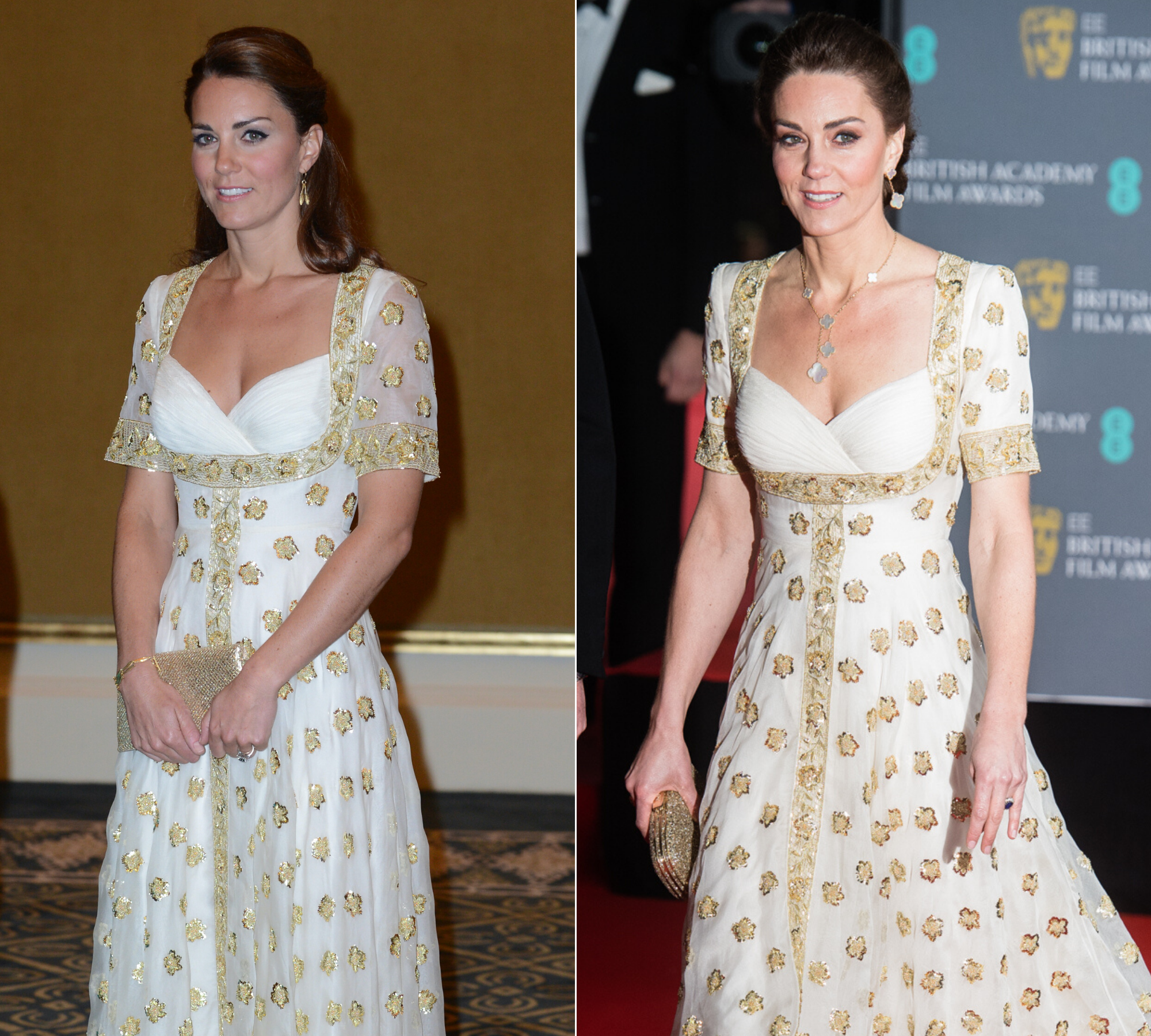 Mark Large/Samir Hussein/Getty ImagesThe Duchess of Cambridge has been known to make subtle alterations to her outfits. Julian Barker/Princess Diana Archive/Getty ImagesPrincess Diana first wore the gown during an official visit to Portugal in 1987 and then again two years later in 1989.

For an official visit to Lisbon, Portugal, in 1987, Princess Diana wore a light-blue Catherine Walker gown in its traditional form.

Two years later, she rewore it, but with the alterations, it looked like a completely different dress.

Princess Diana rewore a Catherine Walker gown that was changed to include a fitted skirt. 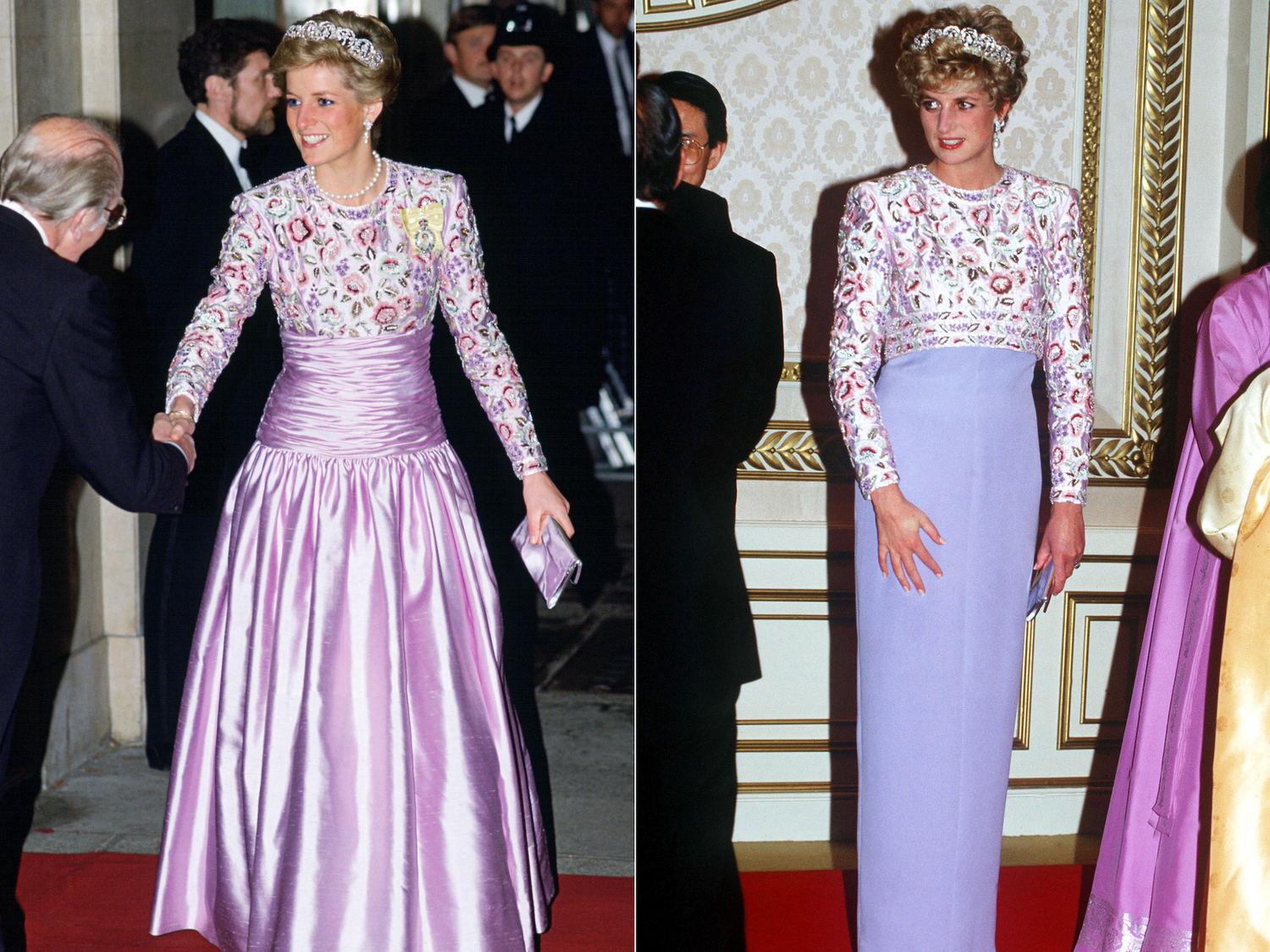 Princess Diana wore the dazzling floral gown to meet the president of Nigeria in 1989. She debuted the remixed version of the dress at a banquet in Seoul, South Korea, in 1992.

The Duchess of Cambridge wore an altered Saloni dress that originally featured sheer paneling and an open back. Moda Operandi/Warren Allott/WPA Pool/Getty ImagesKate Middleton had the sheer design altered to include a panel of fabric that matched her complexion.

For a reception at Kensington Palace in 2016, Middleton wore a high-collared Mary Illusion Dot Dress by the Indian designer Saloni.

The duchess later had a skin-coloured panel of fabric added to the sheer bodice and closed the gown’s previously open back for a more reserved look.

Middleton altered the sleeves on this Alexander McQueen dress. 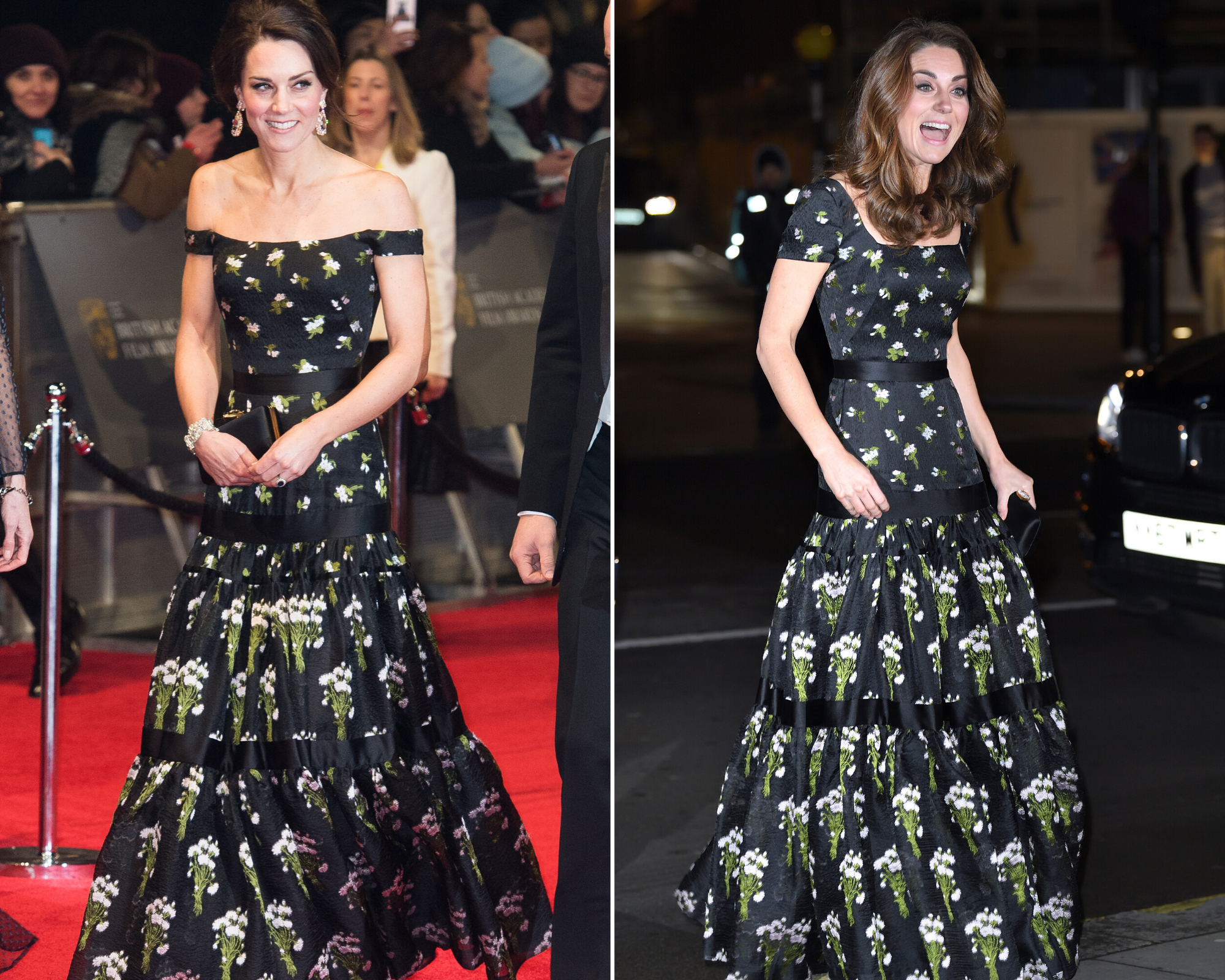 The Duchess of Cambridge turned heads when she arrived at the 2017 BAFTAs in a tiered, off-the-shoulder Alexander McQueen gown.

Two years later, Middleton attended the 2019 Portrait Gala wearing the same dress. However, she added cap sleeves to the gown to make it look brand-new.

Middleton made a subtle change to this long-sleeved Beulah London dress. 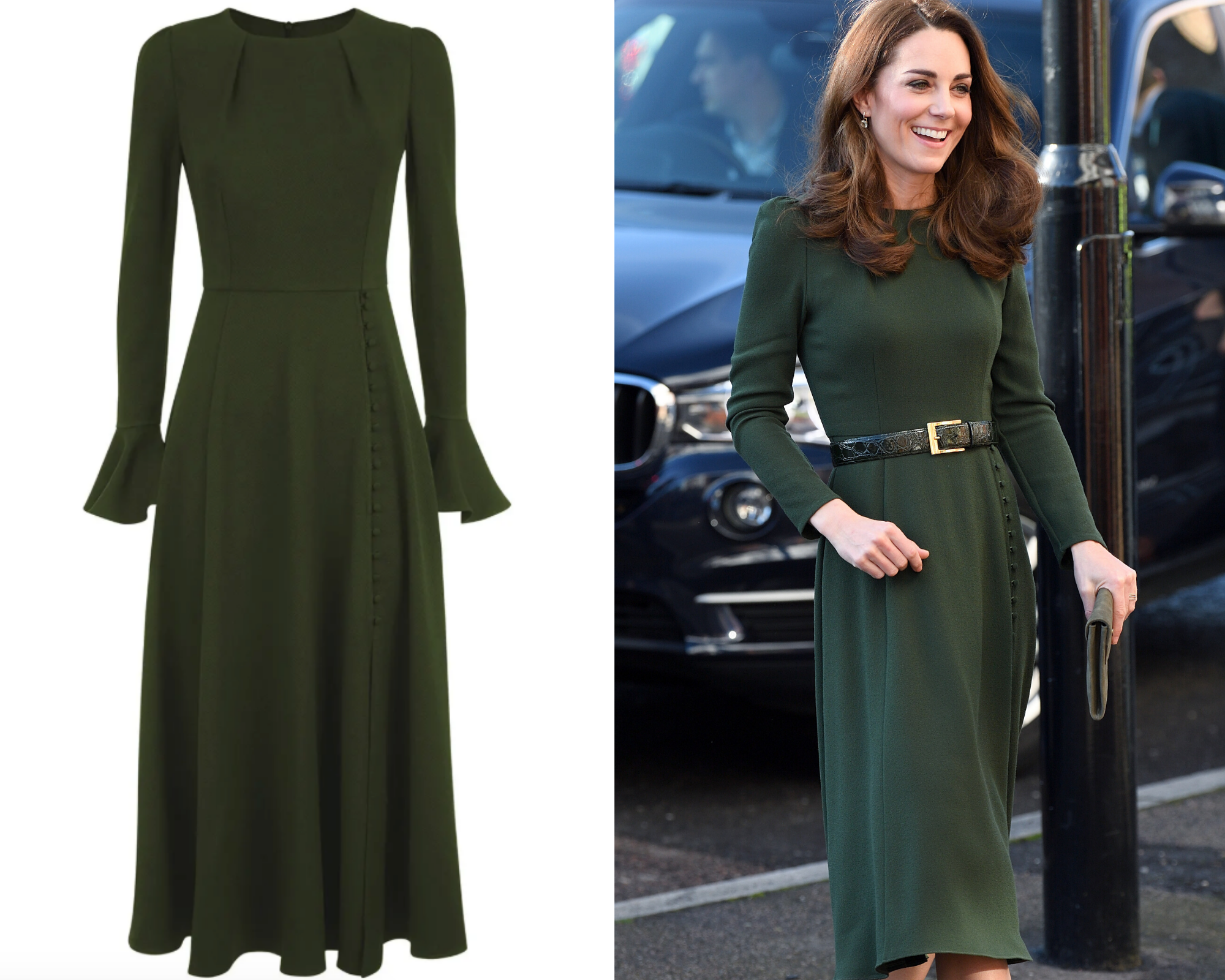 For a visit to the Family Action Charity in January 2019, Middleton wore an olive-green Beulah London midi dress that originally had fluted sleeves. She had the sleeves removed and added a belt, which elevated the look.

“It looks as though she’s taken off all the frills and made it a lot more conservative and a lot more modest,” Susie Hasler, a stylist based in the UK, previously told Insider.

The duchess once swapped out the sheer sleeves of an Emilia Wickstead dress in favour of a solid design. 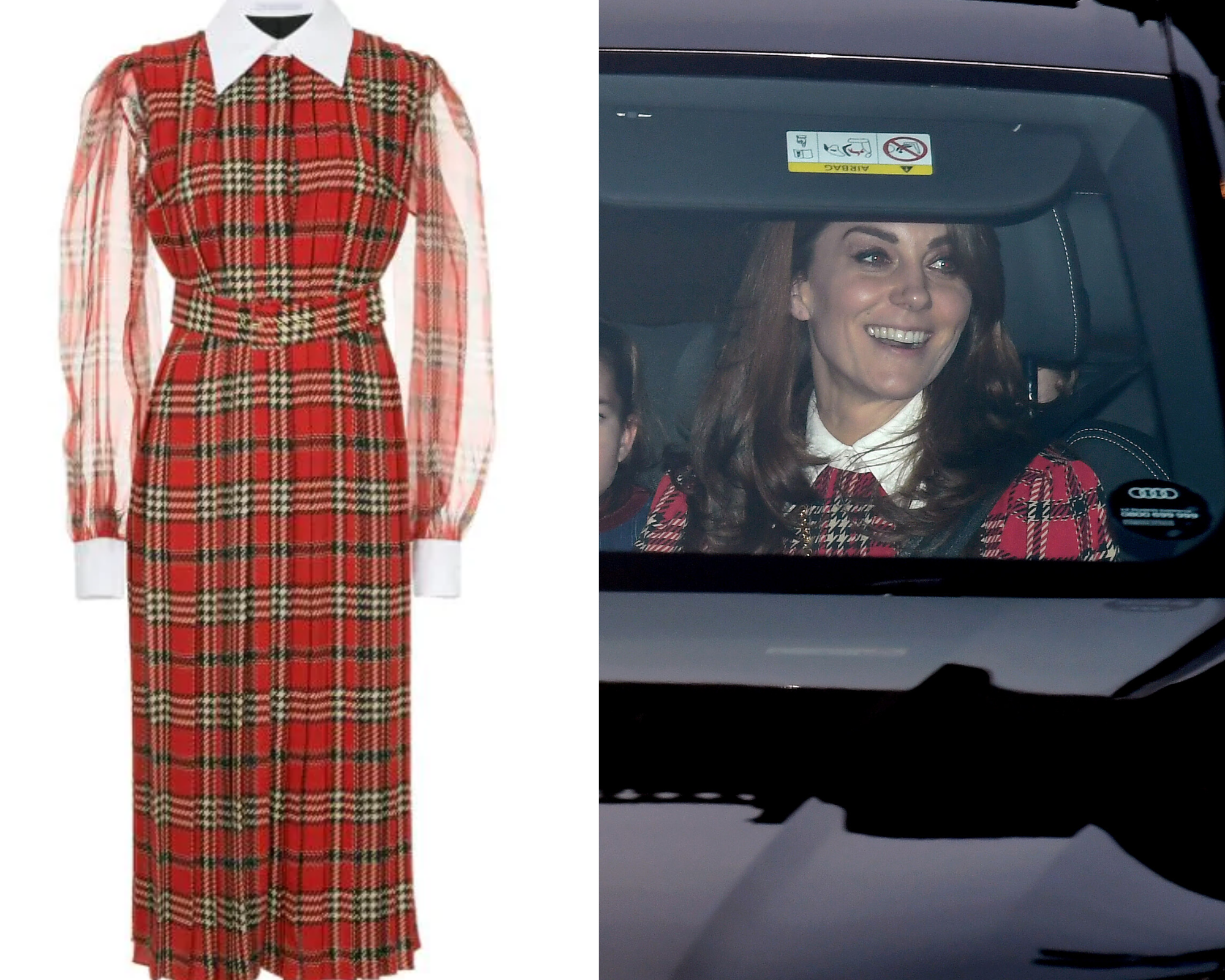 While arriving for Christmas lunch at Buckingham Palace in 2019, the duchess was photographed wearing this tartan dress. She put her own twist on it by having the sheer sleeves removed and replaced with solid fabric to match the rest of the design.

“In this picture, she’s out with her family for the day, so she’s chosen something very conservative,” stylist Susie Hasler said. “She always seems to favour those high necklines, which really work for her.”

The Duchess of Cambridge made a few subtle changes to this Alexander McQueen dress.

Middleton wore the original design in 2012 to an official dinner hosted by Malaysia’s Head of State.

The duchess pulled it out of her closet again for the 2020 BAFTAs but had it changed to include a layer of fabric on the sleeves so that they would no longer be sheer.

“With this particular dress, it appears she adapted the sleeves to flatter her figure, adding a lining and shoulder pads to create a more structured look,” Anthony McGrath, leading fashion journalist and senior lecturer at the Fashion Retail Academy, previously told Insider.“This means the dress frames her face better and enhances her posture.”

The Duchess of Sussex reportedly had skin-coloured paneling added to the $US75,000 Ralph & Russo gown she wore in her official engagement photos. The gown Markle wore in her official engagement photos was originally designed without a nude panel, giving the top a sheer look.

For Markle and Prince Harry’s official engagement photo shoot, according to Harper’s Bazaar, the duchess appeared to wear the dress with an added lining to make it more modest. 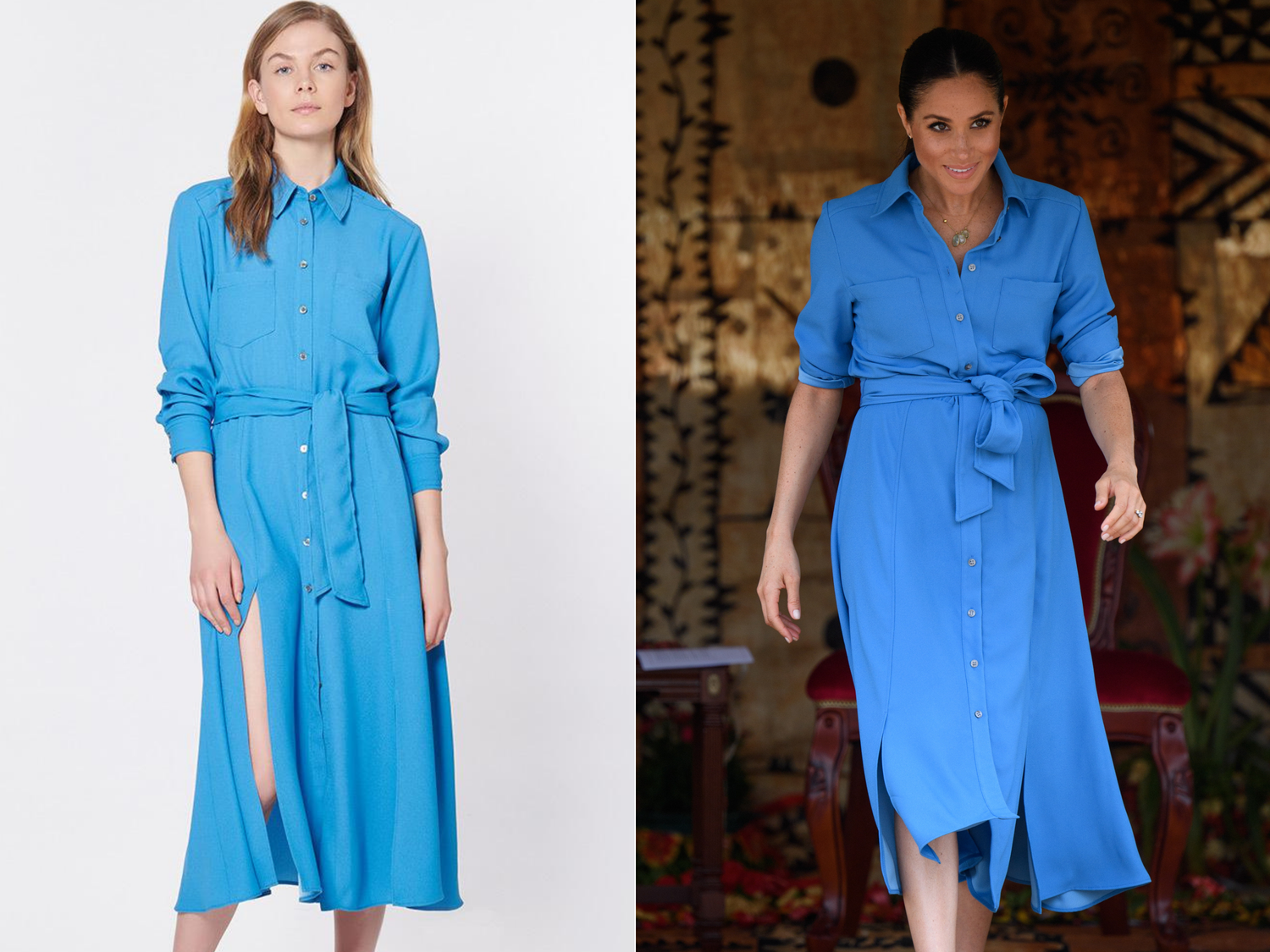 Veronica Beard/Samir Hussein/WireImageMeghan Markle wore the dress in South Africa while on her royal tour with Harry in 2018.

Markle’s blue Veronica Beard dress – which she wore with Harry on their royal tour in South Africa in 2019 – appeared to be adjusted so that the thigh-high slit ended just above her knee.

The former royal also had the sleeves removed from this Maggie Marilyn white blazer dress during her tour of New Zealand in 2018. Instead of keeping the sleeves for a more conservative look, according to Harper’s Bazaar, Markle had them removed completely and paired the dress with blue suede Manolo Blahnik heels.