Prince Charles, the heir to the British throne, just tested positive for coronavirus. Here's a look at the monarchy's full family tree. 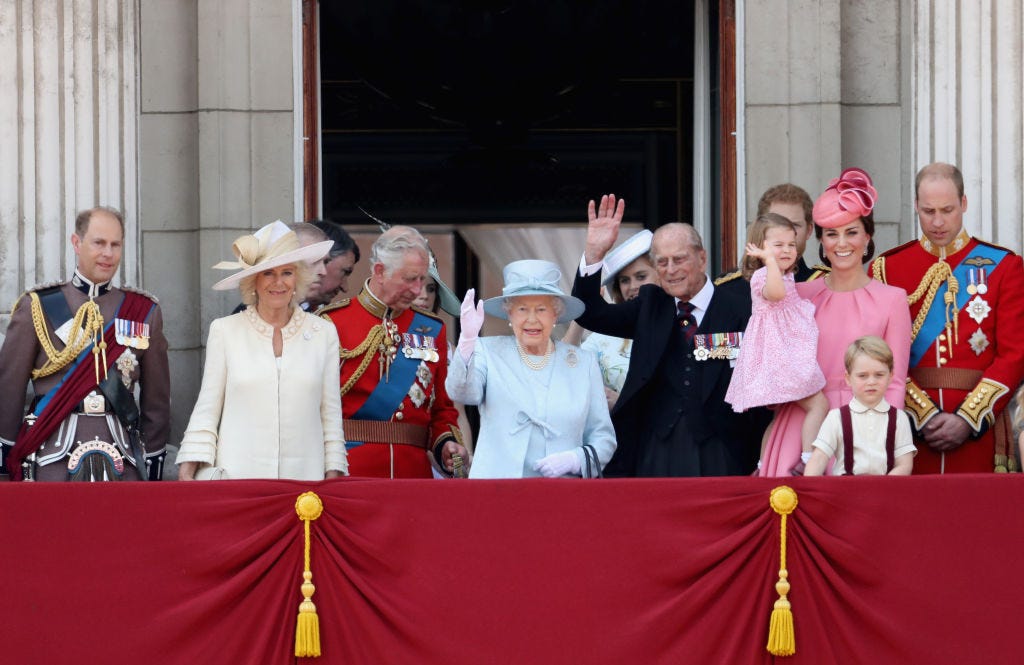 The royal family tree of Britain’s monarchy is quite a thing to behold.

King George V, the first monarch from Britain’s House of Windsor, and his wife Mary of Teck had six children. Four of those offspring proceeded to have kids of their own.

As a result, well-known royals like Prince George of Cambridge and his younger siblings Princess Charlotte and Prince Louis have tons and tons of less-famous cousins.

The House of Windsor is a relatively young dynasty. King George V, a grandson of Queen Victoria, inherited the throne in 1910. Like his father King Edward VII, he was a member of the House of Saxe-Coburg and Gotha. The German dynasty was injected into the British monarchy by Albert, Prince Consort, the husband of Queen Victoria.

But by 1917, English attitudes toward Germany had soured considerably, thanks to World War I.

In response to rising anti-German sentiments, George V decided to make a considerable PR move. He swapped out Saxe-Coburg and Gotha for the far more English-sounding name of Windsor. The royal family’s website said the new name was inspired by Windsor Castle – where George V’s granddaughter Queen Elizabeth II still resides on weekends.

Here’s an in-depth look at the British royal family tree, beginning with the family that started it all.

King George V, born in 1865, was the first monarch of the House of Windsor.

King George V and his wife Mary of Teck had six children together between 1894 and 1905. One of their children didn’t survive into adulthood. Prince John, the baby of the family, had severe epilepsy and a learning disability. He died in 1919 at the age of 13.

Their eldest son, King Edward VIII, inherited the throne upon his father’s death in 1936. Had he remained king, Edward VIII’s hypothetical descendants would have inherited the British Crown.

But Edward VIII abdicated in 1937 in order to marry American divorcee Wallis Simpson. The controversial couple – who were rumoured to harbour Nazi sympathies – never had children. 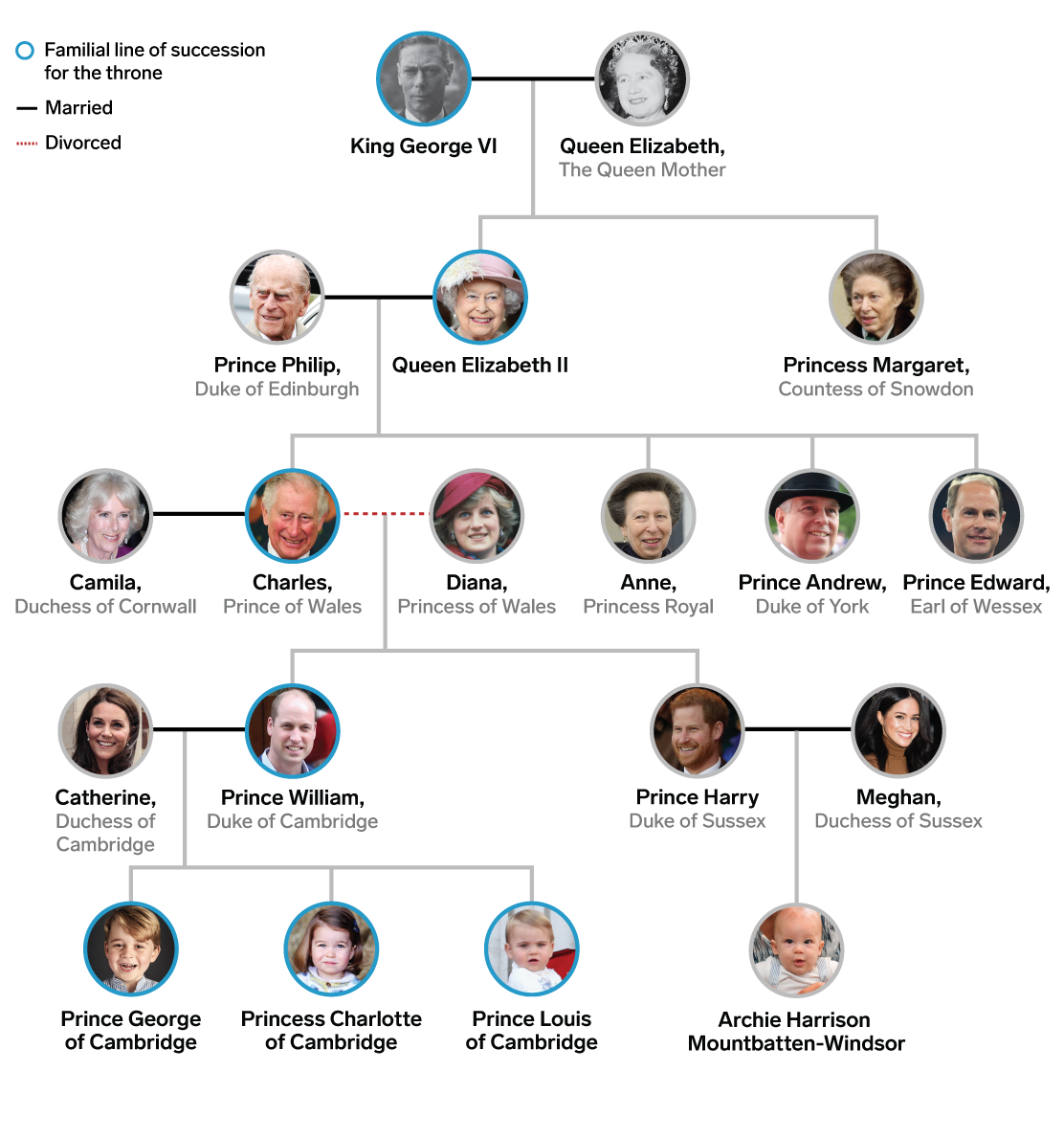 After his older brother’s abdication, King George VI took to the throne for a reign of nearly 15 years. He and his wife Queen Elizabeth had two daughters, Queen Elizabeth II and Princess Margaret.

George VI’s descendants are set to continue to inherit the throne in the foreseeable future. His eldest daughter, Queen Elizabeth II, is the longest-reigning British monarch in history. Her son Charles, Prince of Wales, is reportedly set to succeed her when she turns 95 in 2021.

On Wednesday, a Clarence House representative confirmed the 71-year-old heir tested positive for the coronavirus in a statement – he is “displaying mild symptoms but otherwise remains in good health.”

After him in the line of succession would come Prince William, and then Prince George.

Prince Harry and Meghan Markle announced in an Instagram post on January 8, 2020 that they were taking a “step back as ‘senior members’ of the Royal Family,” so they could raise their son Archie with more privacy, splitting their time between the UK and North America.

The Lascelles family is descended from King George V’s only daughter, whose husband passes on the Earl of Harewood title. 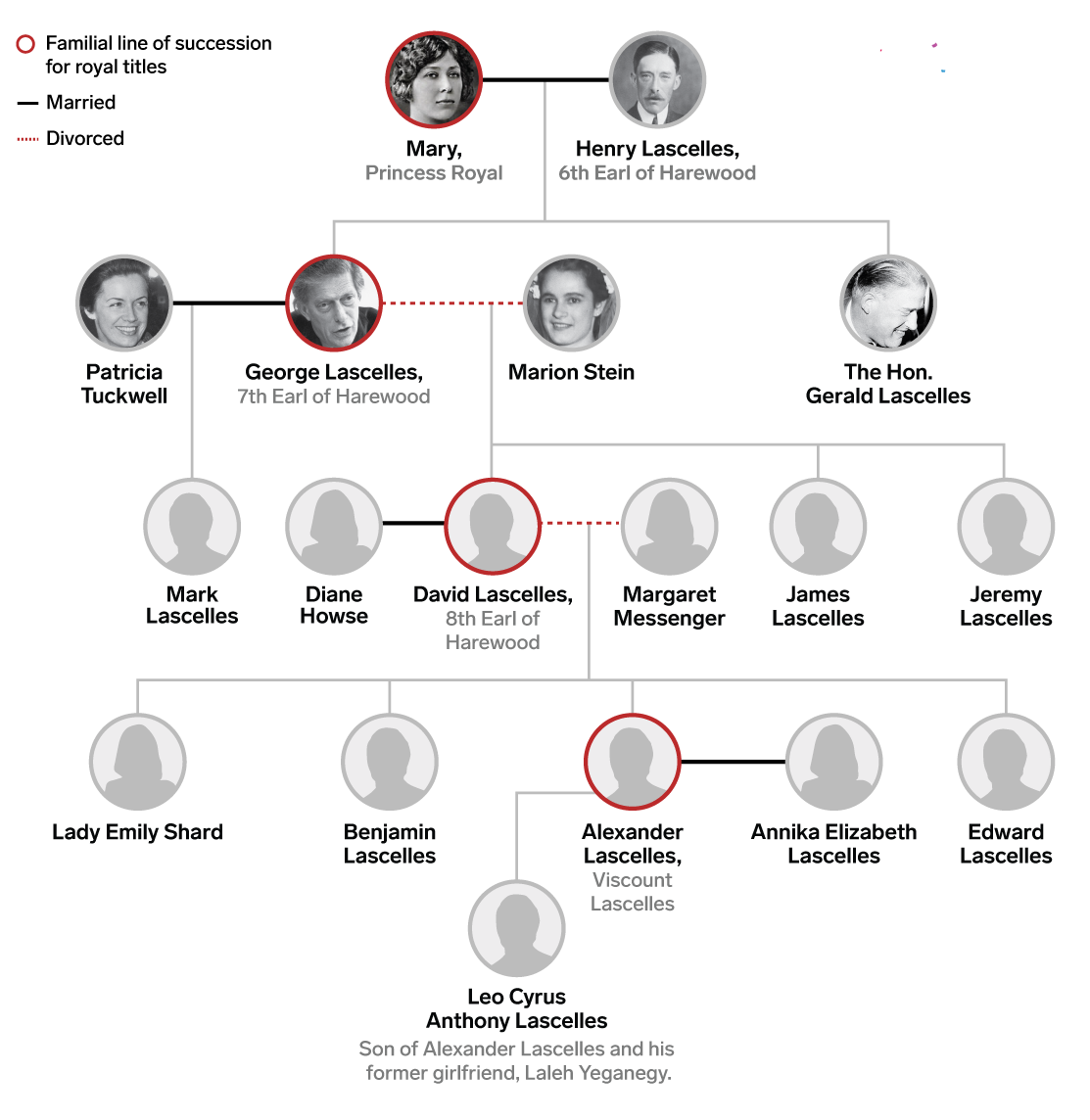 The eldest two children of David Lascelles, the current 8th Earl of Harewood, were born before Lascelles married his first wife. They were therefore unable to inherit his title.

Leo Cyrus Anthony Lascelles, the only son of Alexander Lascelles, Viscount Lascelles, is also not eligible to inherit his family’s royal title, as his parents were not married at the time of his birth.

The dukedom of Gloucester is still held by the descendants of Prince Henry, King George V’s third son. 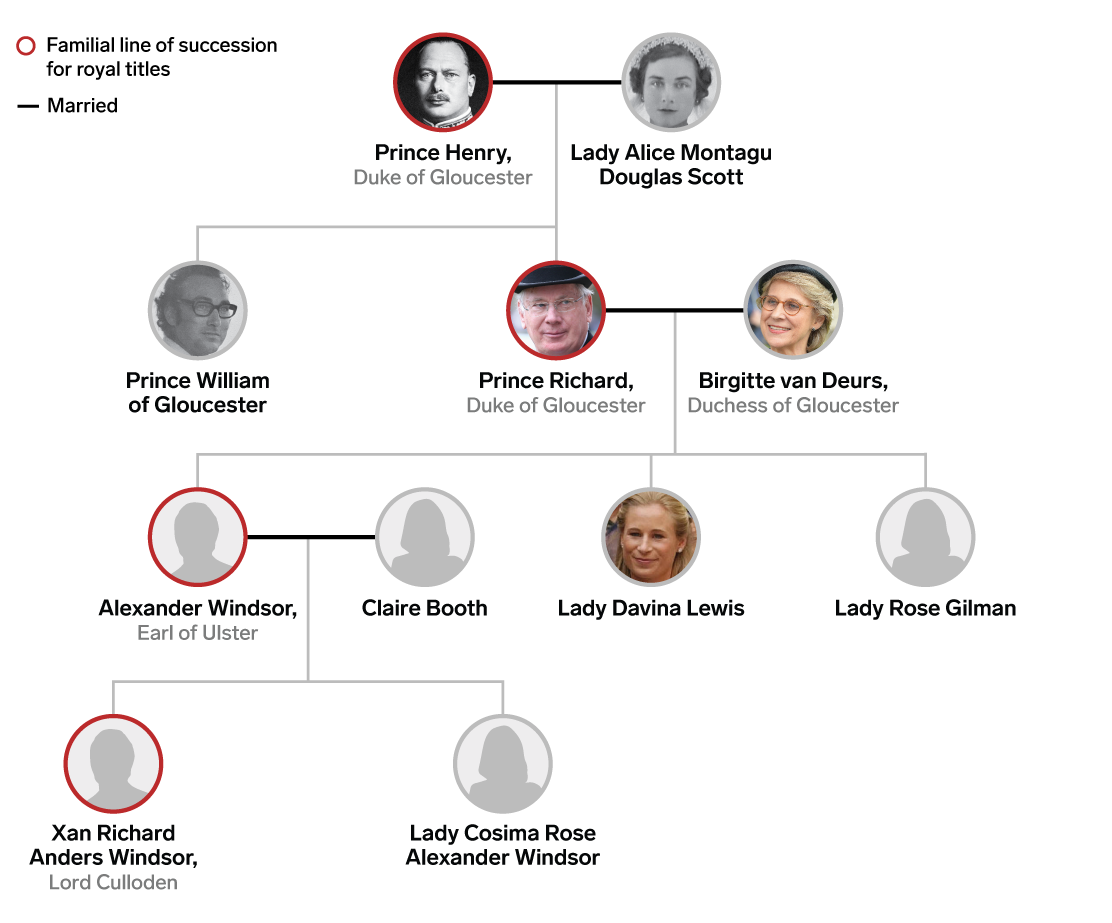 Prince Henry, Duke of Gloucester, and his wife, Lady Alice Montagu Douglas Scott, had two sons together. One, the Prince William of Gloucester, died in a 1972 plane crash. He hadn’t had any children, so the title passed onto his younger brother Richard.

Prince Richard, Duke of Gloucester, inherited his father’s dukedom and went on to have three children and six grandchildren.

Prince George’s great grandson is set to eventually become the Duke of Kent — but he will never inherit the throne. 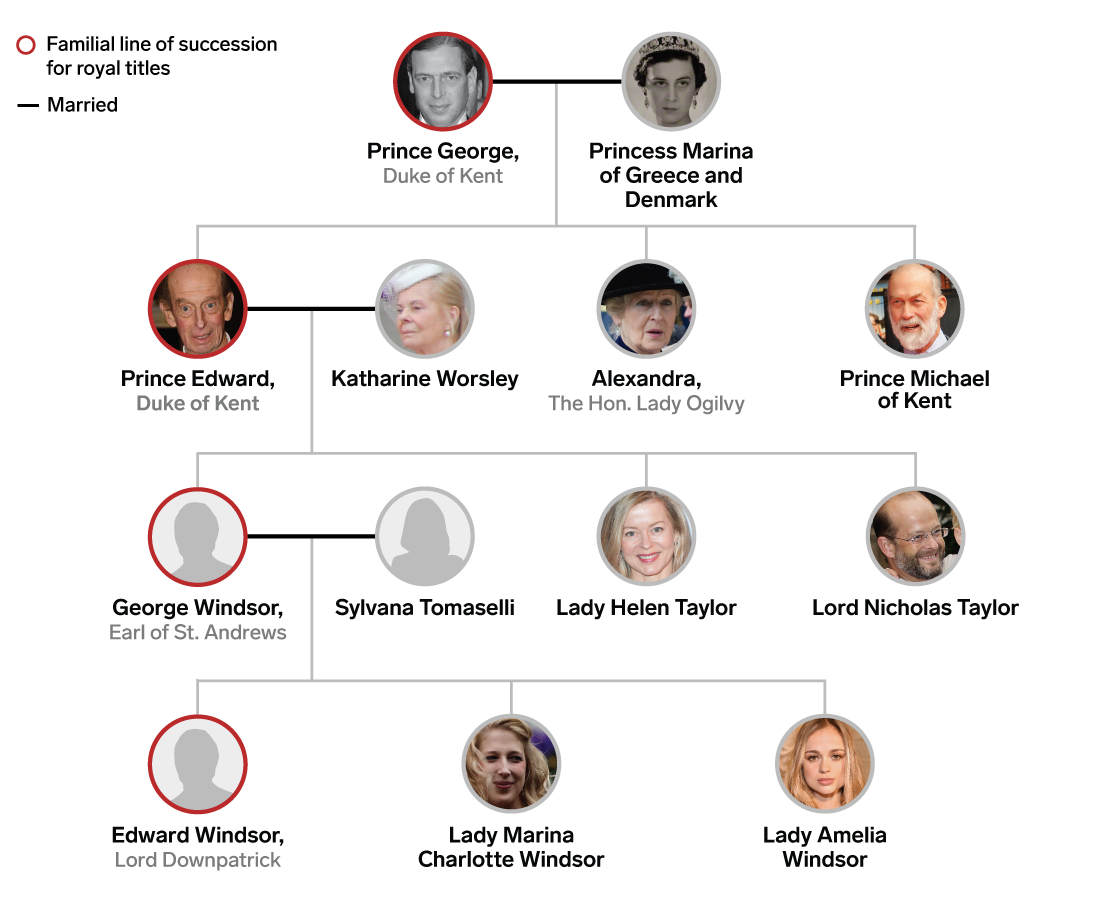 Prince George, Duke of Kent, and his wife, Princess Marina of Greece and Denmark, had three children before he was killed in a 1942 military aeroplane crash.

Edward Windsor, Lord Downpatrick, and Lady Marina Charlotte Windsor are both confirmed Roman Catholics, meaning they are banned from succession to the Crown.

However, Downpatrick is still in line to inherit the Dukedom of Kent. He will potentially become the first Catholic Duke of Kent in centuries.