There’s nothing quite like enjoying a cool drink at a rooftop bar when the weather is warm and sunny.

A good Sydney rooftop bar not only has great food and drink menus but also fantastic views of the city, the beach, or in some cases, the harbour.

With consideration of food, drink, views, atmosphere and decor; these rooftop bars are some of the best that Sydney has to offer.

Yes, this is the same Cafe Del Mar that makes the excellent chillout mixes.

This is a luxe restaurant with a swanky Spanish-flavoured menu and bar with a killer cocktail menu.

They have Sunset Sessions every Saturday afternoon, featuring a host of prominent DJ’s including Mark Farina and Sneaky Sound System.

Facebook/Sky Terrace at The Star

Just down the road from Cafe Del Mar is The Star, where you’ll find Sky Terrace.

Navigate your way through poker machines, high rollers and the 24 hour food court in the casino, and you’ll find yourself at the terrace with an incredible view of the harbour.

Dress to impress at this inner-city bar that’s part of the Hilton hotel and perfect for an after-work beverage or during a break from a weekend shopping trip Pitt Street Mall, The Galeries, and The Strand Arcade. You’ve got a great view of Sydney Town Hall too.

There are fancy cocktails on the drinks list too numerous to name, as well as bar snacks, pizzas, and antipasto, cheese and cured meat share platters. 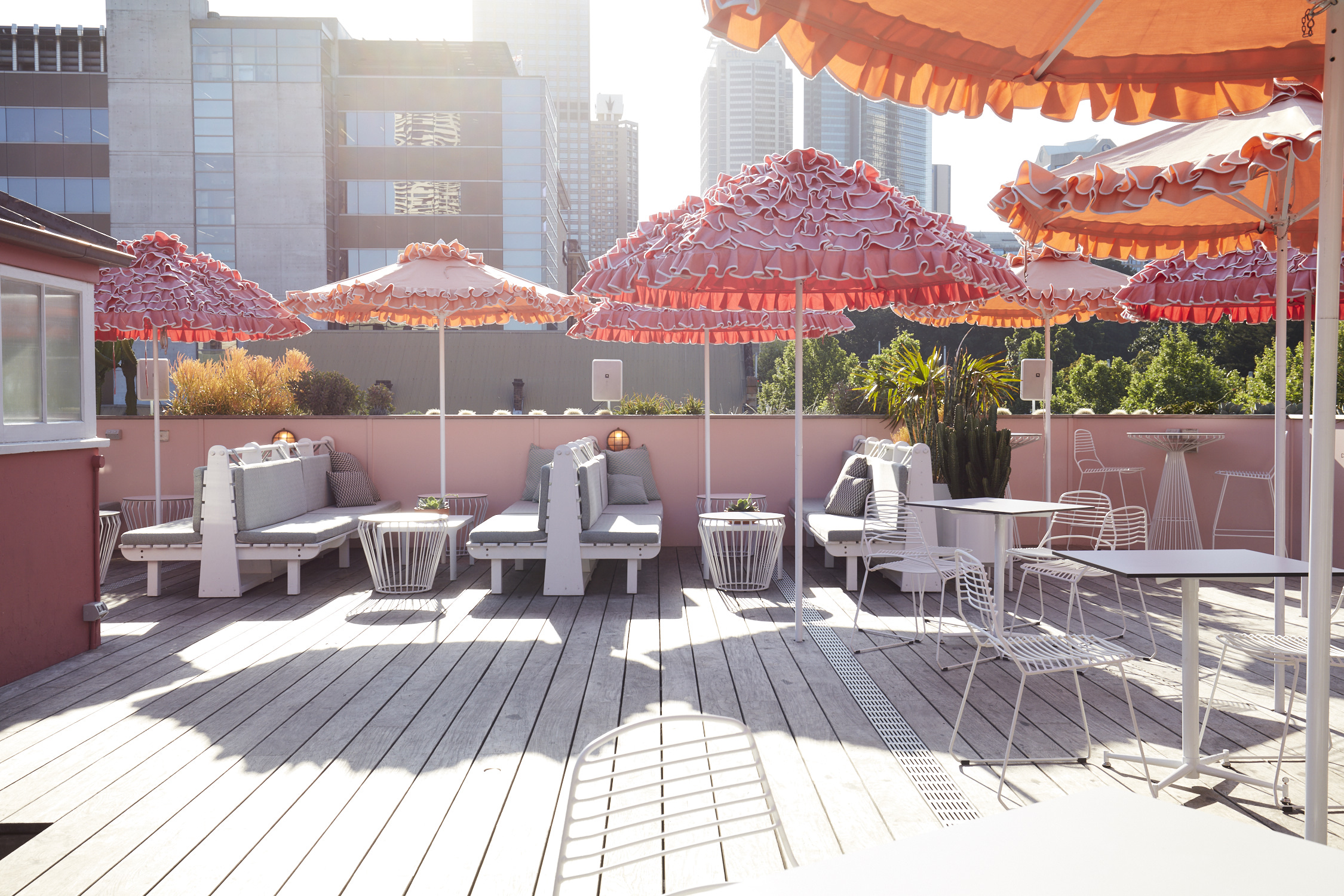 Slims rooftop overlooks the stunning Hyde Park with uninterrupted views of the nearby city CBD and Centrepoint tower.

If you can only go to one rooftop bar in Sydney, make it Ivy Pool Club. It’s decked out in beautiful bright furnishings, and the bartenders at the far end bar can whip you up a mean cocktail of your choice.

Book a cabana and grab a few pizzas to share among your group. We recommend the capricciosa and then the nutella calzone for dessert.

We wouldn’t recommend getting in the pool, though.

Come night time, head down the stairs to the right of the lifts, head past the unisex bathrooms and into the Changeroom, which is a dance club that plays house and electronic music.

Rather than take the lift, walk up the exterior stairs to Untied to get a great view of the recently built Barangaroo area.

The bathrooms are very cool, too, decked out in leafy wallpaper and floor to ceiling windows.

The Glenmore Hotel, The Rocks

Would this really be a list of Sydney’s best rooftop bars without including The Glenmore?

It’s been around since the 1800’s, and is one of the last surviving pre-Harbour Bridge buildings on Cumberland Street.

It’s fantastically unpretentious and does some great pub grub.

It’s the newest, fanciest bar in the area. There are three levels, but the best one is at the top. It was even awarded best new rooftop bar at the 2018 Time Out Bar Awards.

But head right to the top, because your effort at making it all the way up is rewarded with a menu of high-end snacks including barramundi sliders, caviar, and ham and cheese donuts.

Also, it’s where you can get that sea urchin martini you may have heard about.

Get in early because Taylor’s doesn’t really take bookings, and it gets crowded. Really crowded. (See above).

Catering for the nine to fiver’s during the week, it has a more party vibe on the weekend with DJ’s and a dance floor.

For those partying into the wee hours of the morning, there’s a limited menu of some gourmet dishes like pea and spinach tortellini, crumbed king prawns, ham and leek terrine, as well as desserts like sticky date pudding and rhubarb and ginger crumble trifle available.

Some of the best rooftop bars are just out of the city, so they require a bit of travel.

But if you are prepared to make the journey, you’re rewarded with some of the best views of Sydney’s beaches, city fringe and nightlife precincts.

It’s also Instagrammable to the hilt. You’d be doing your social media feed a disservice if you didn’t take at least one happy snap here.

The Glass House is a bright, breezy gin bar with great views over Manly beach.

DIY a gin cocktail here. Pick your gin, botanical/s and your mixer, and the bartenders will whip it up for you. Overwhelmed with choice? There’s a whole menu of bartender-approved gin cocktails to pick from.

It’s recently opened, so it’s still relatively not well-known. Our bet is it won’t stay that way for long.

This intimate rooftop only has room for 40 people, so get in early or you will have to loiter at the door in the hopes of someone leaving.

If you do manage to nab a seat, settle in for the long haul and enjoy spectacular views over Darlinghurst and the Sydney CBD.

The old Kit & Kaboodle rooftop bar had a makeover and is now Sweethearts Rooftop.

You won’t even realise you’re in Sydney’s red light district in this casual, pastel-coloured bar filled with greenery.

You can give the main food menu (which consists of 2 parts — Pizza and Not Pizza) a miss.

Instead, grab the banquet set menu and enjoy six courses of great Mexican food for $30 per person.

The Dojo is only open to the public during October to April on Sundays, but it’s one of Sydney’s best rooftop bars with a spectacular view right over Manly Beach.

Become a member online and you can enjoy $5 house spirits until 8pm. If you don’t want to sign up, you can still get a bucket of 4 beers for $20.

At other times of the year, it’s a bookable space perfect for weddings, birthdays and other events.

Home to the Eastern Suburb’s well-to-do Sunday sesh crowd, Coogee Pav (as it’s known) is the place to see and be seen.

The cocktail menu has classics with a twist, and don’t overlook the short but sweet dessert menu, featuring a Nutella calzone, a pavlova and our favourite; a “‘Gay Time’ dome” which is butterscotch ice cream coated in milk chocolate with a biscuit crumb.

This is a little slightly grungier oasis above busy Oxford Street.

It feels like a share house you might have rented with friends during university — cool and slightly ramshackle with comfy sofas and a fun and relaxed atmosphere — but with tastier drinks and better music.