Rocket Lab via TwitterAn Electron’s booster, or first stage, that Rocket Lab intends to recover in the Pacific Ocean after flying its ‘Return to Sender’ mission.

Update (5:07 a.m. ET on Friday): Rocket Lab says it successfully parachuted the Electron rocket’s booster into the Pacific Ocean and is recovering the hardware. You can watch a replay of the mission below.

SpaceX is famous for recovering and reusing its colossal Falcon 9 rocket boosters, each time saving more than $US10 million. However, the Elon Musk-founded company is about to have some impressive (if smaller) competition in New Zealand.

Rocket Lab on Thursday night plans to try its first-ever recovery of an Electron booster, or first-stage rocket, after it has helped propel a bunch of small satellites into orbit and then fallen back toward Earth.

Called “Return to Sender,” the mission is scheduled to lift off at 9:20 p.m. ET on Thursday (3:20 p.m. NZT on Friday) from the private company’s launch facility on the Mahia Peninsula in New Zealand. A few hours before the attempt, Rocket Lab tweeted the weather looks 85% “go” for launch.

Rocket Lab plans to broadcast the entire flight â€” including the rocket-booster recovery â€” live online, and you can tune in with the YouTube video player, below.

This flight’s booster won’t be used again. Instead, it will parachute into the Pacific Ocean and a boat crew will swing by to pick it up and return the hardware for analysis back at Rocket Lab’s factory.

However, it’s a crucial test toward completing a booster-recovery program 18 months in the making, says Peter Beck, the company’s CEO and founder.

“The ultimate goal here is to get it back in such a condition that we can put it back on the pad, get it back up, charge the batteries, and go again,” Beck said earlier this month. “If we can achieve that milestone, the economics certainly do change quite significantly.”

If all goes according to plan, the booster of the 59-foot-tall Electron rocket should disconnect from the second-stage rocket, which finishes blasting a payload to orbit, around 2 minutes and 36 seconds after lift-off.

From there, the booster will reorient itself so its nine heavy engines point toward the ground â€” a key step if it is to survive the next five minutes of falling. As the atmosphere starts to thicken, the booster will hit what Beck calls “the wall,” which will dramatically heat and strain the vehicle. 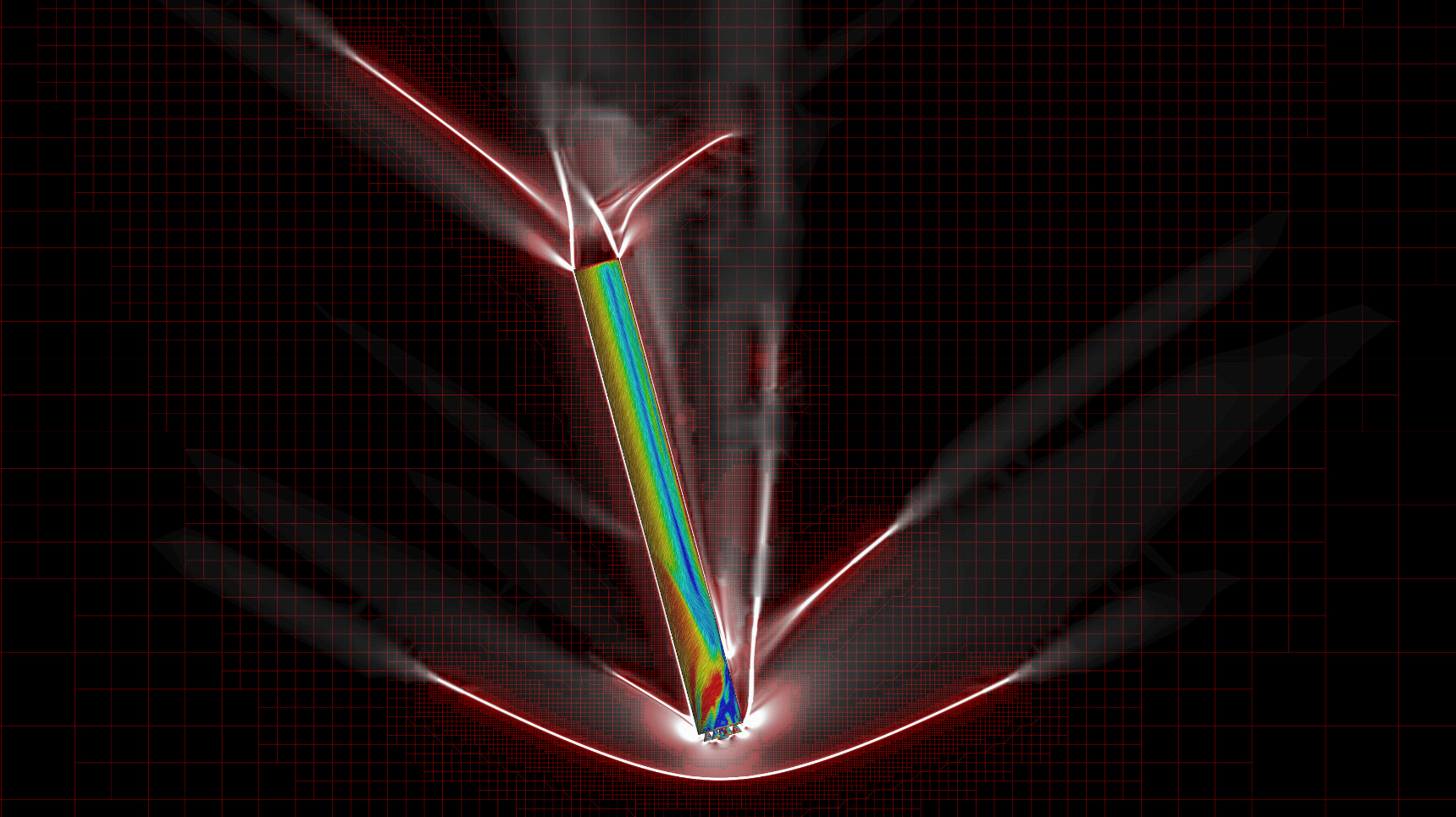 Rocket LabA computer simulation of forces affecting an Electron booster, or first-stage rocket, as it careens through ‘the wall’ of Earth’s atmosphere. Rocket Lab performed the simulation to explore capturing and reusing the multi-million-dollar aerospace hardware.

Should the booster survive, a series of parachutes will start deploying out of its top end about seven minutes and 38 seconds into the mission, helping slow down the vehicle to about 22 mph (36 kilometers per hour).

Splashdown of the booster should occur just under 13 minutes after launch, and Rocket Lab plans to broadcast the moment, according to spokesperson Morgan Bailey. 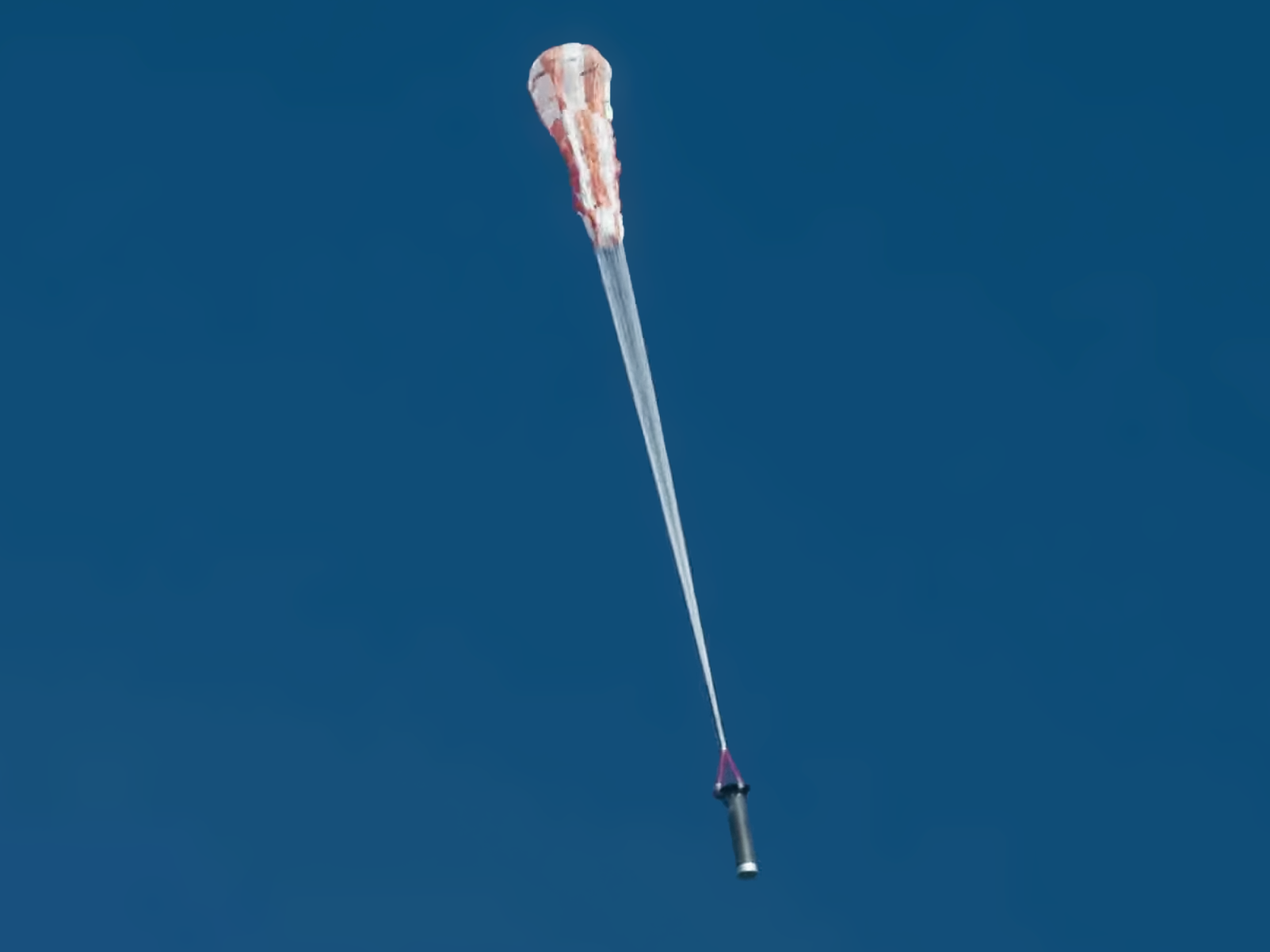 Rocket LabRocket Lab tests a parachute system with a dummy rocket booster. The small-launch startup hopes to use the system as part of a way to recover and reuse its Electron rocket boosters.

“We’ll have a camera on the first stage that should capture some of the descent,” Bailey told Business Insider in an email.

However, she warned the company expects to temporarily lose communications with the booster, and thus “won’t get spectacular splashdown views.”

The footage after recovery should prove impressive, though: Engineers packed a 360-degree camera into the stage to record its fiery adventure. “If we recover the booster intact we’re hoping to get more footage from that,” Bailey added.

If the launch is delayed for any reason, Bailey said Rocket Lab has “backup opportunities available through November 30th.” The graphic below shows a full timeline of mission events. 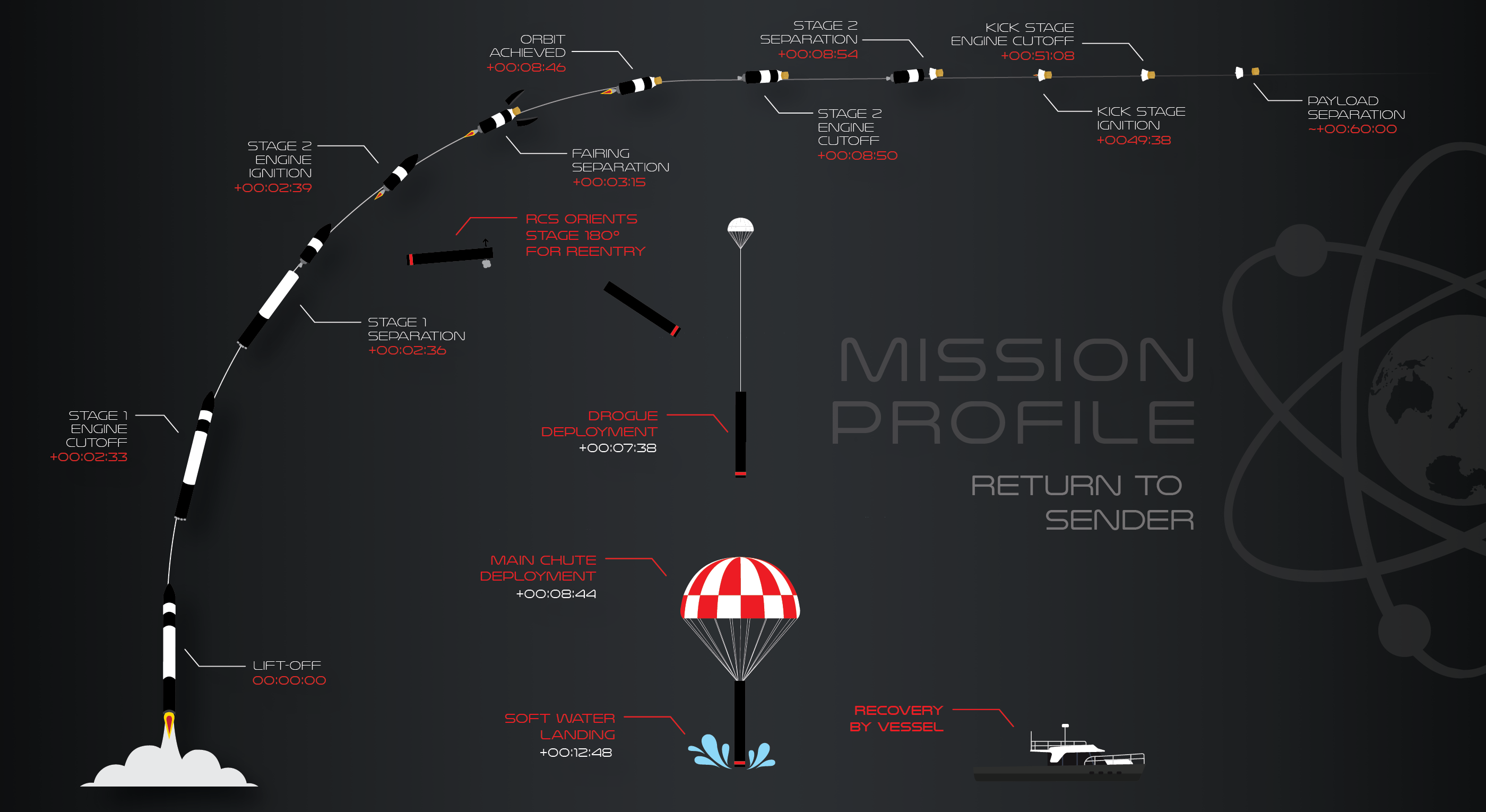 Rocket LabFor its ‘Return to Sender’ mission, Rocket Lab hopes to use a parachute-based system to recover a used Electron rocket booster.

Beck, who founded Rocket Lab in 2006, initially wrote off recovering Electron’s booster due to its small size: Adding the capability would eat into too much payload capacity, he thought.

“Things just don’t scale nicely” with small rockets, Beck told reporters during a call earlier this month. “This is a fundamental reason why I initially said that I don’t think a small launch vehicle can be recovered.”

But with growing industry demand to launch small satellites, and after seeing SpaceX save gobs of money and time by recovering and reusing its boosters, Beck shifted his thinking. Even if Rocket Lab breaks even on recovery, he figured, it would save him valuable production time to launch more customers.

“If we can get it back and it’s in wonderful condition, then of course, economically, it’s also very powerful,” Beck said. 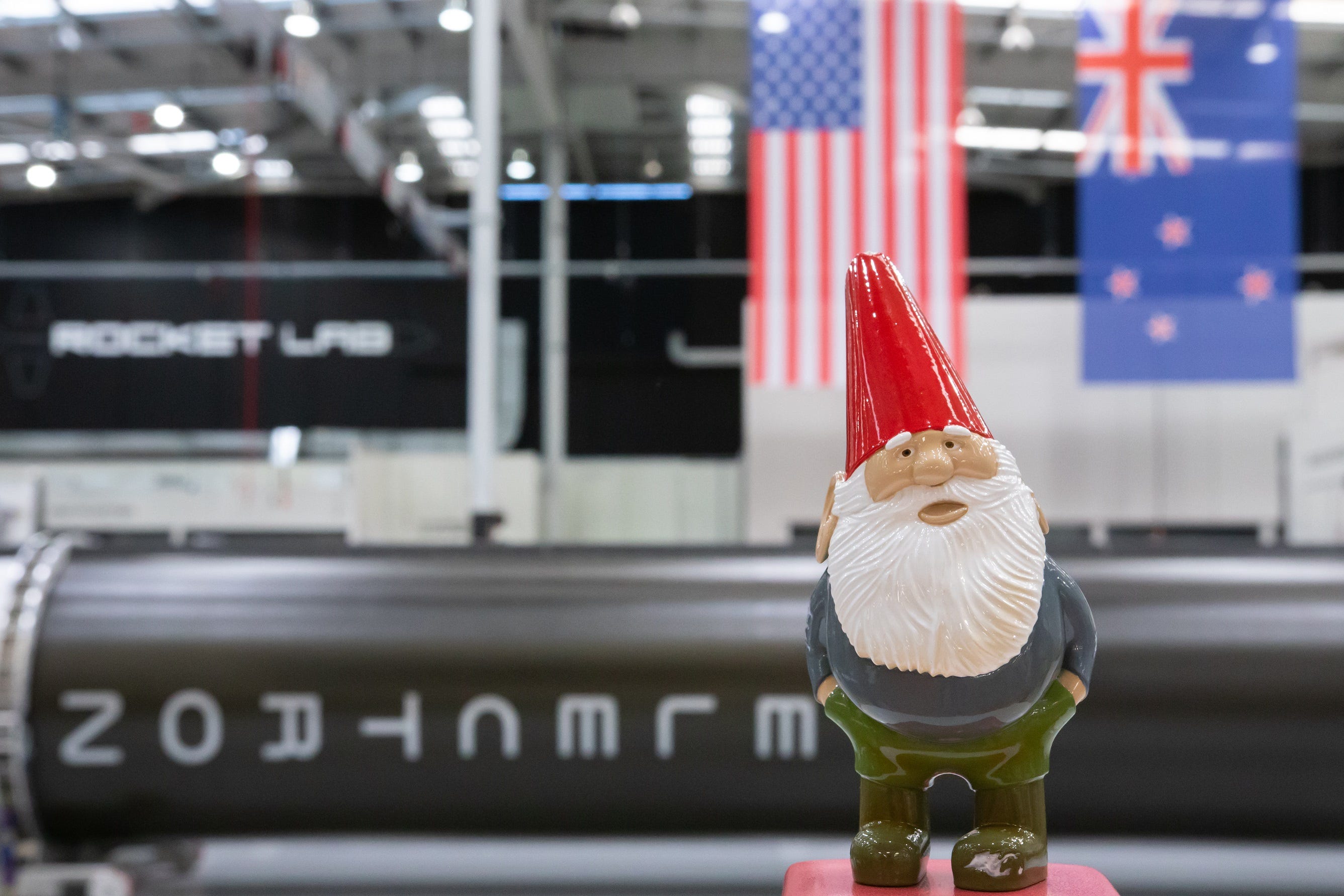 Rocket LabA titanium figurine of Gnome Chompski, a character from the popular gaming series ‘Half Life,’ will ride an Electron vehicle’s Kick Stage to orbit on Rocket Lab’s ‘Return to Sender’ mission.

For every person who watches Rocket Lab’s live feed within 24 hours of launch, Gabe Newell â€” a video game developer and founder of the digital distribution company Valve â€” will donate $US1 to Starship children’s hospital in Auckland, New Zealand.

The billionaire has spent the pandemic living in New Zealand (a relatively safe haven from coronavirus) and wanted an unusual way to thank his hosts for their hospitality, according to Business Insider’s Grace Dean. 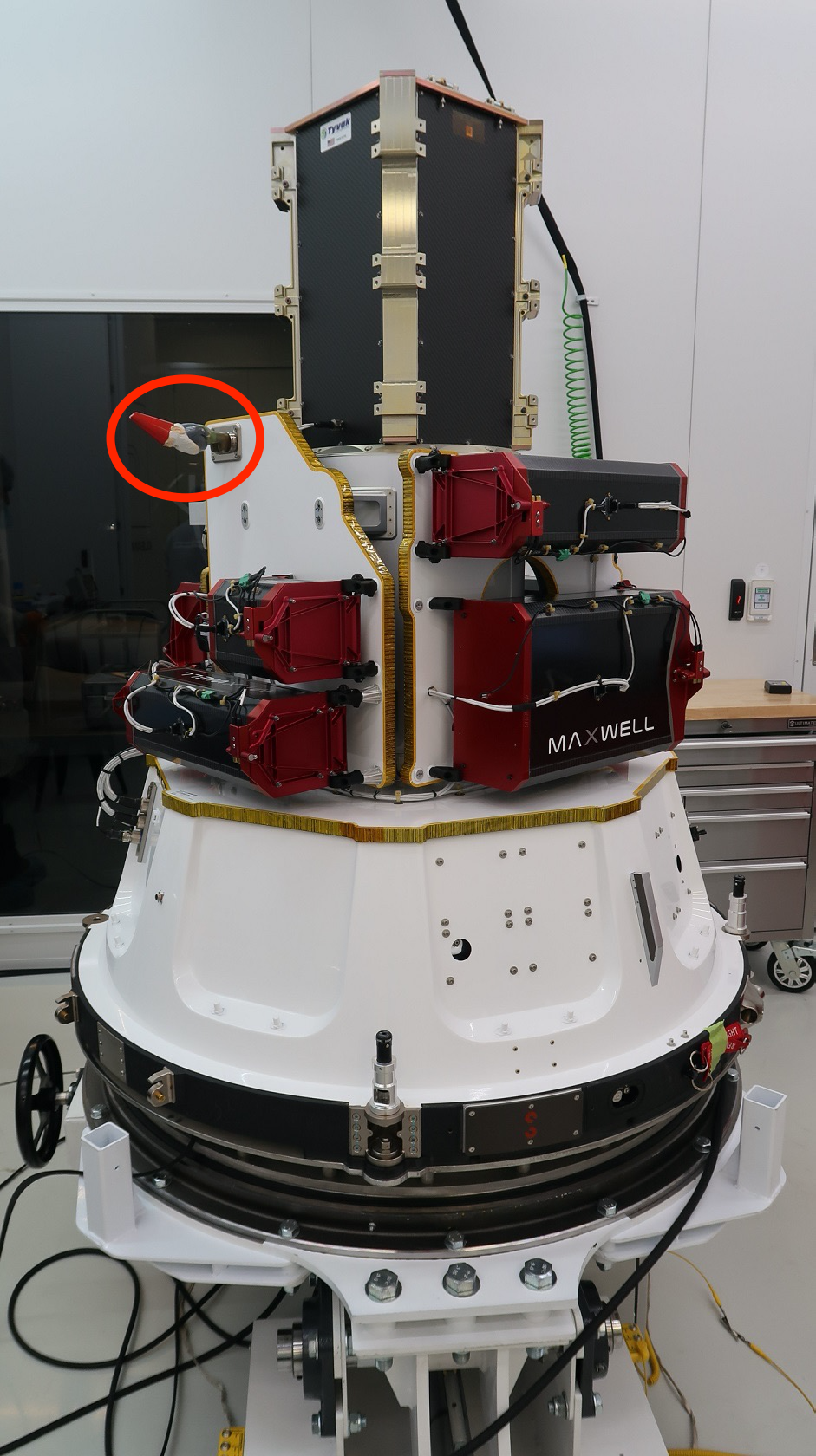 Rocket LabGnome Chompski, sadly, is doomed to a fiery end.

As part of the fundraising stunt, Newell purchased a 150-millimetre (5.9-inch) 3D-printed titanium figurine of “Gnome Chompski,” a quirky character in the Half-Life video game series. He then paid for space on Rocket Lab’s Kick Stage, a small spacecraft platform that will deploy 30 small satellites into orbit.

But Gnome Chompski is doomed to a fiery end, since the Kick Stage will eventually return to Earth and burn up in its atmosphere while travelling more than 15,000 mph.

Rocket Lab is hoping to avoid a similar fate for the booster, though, and proceed to catching future parachuting Electron boosters with a helicopter.

“There’s really not too much point in going and catching a smouldering stump with a helicopter,” Beck said.

This story has been updated with new information. It was originally published at 5:15 p.m. ET.

Are you a space-industry insider with a story or information to share?Email Dave Mosher, send him a Twitter direct message, or consider more secure communication options listed here.