For nearly 40 years, the Republican National Committee was barred from engaging in voter intimidation tactics and “ballot security” measures like paying law enforcement to appear at polling sites.

But in 2018, a federal judge lifted the restriction, ending the 1982 consent decree. This year will be the first time in nearly four decades that a presidential election is held without this agreement in place â€” an addition to the heap of challenges already influencing voters amid a global health crisis.

The coronavirus pandemic has upended US elections, bringing on postponed primaries, changes to in-person polling sites, and a battle over expanded vote-by-mail.

“We’ve never seen a presidential election quite like this one because the dynamics of it are just so different,” Jon Greenbaum, chief counsel and senior deputy director for the Lawyers’ Committee for Civil Rights Under Law, told Business Insider.

In 1981, Democrats accused Republican officials of voter suppression after the RNC sent off-duty police officers to patrol polling sites in Black and Latino neighbourhoods, Greenbaum said. The DNC and RNC agreed to settle the case rather than go to court, leading to limitations in the ways the RNC can monitor voting. Republicans did not admit to any wrongdoing but agreed to stop policing communities of colour.

Since then, DNC officials invoked the agreement multiple times in the course of its near-40-year run, acting as a check on the RNC if it engaged in dubious tactics on or ahead of Election Day.

Voting rights groups are on the lookout for intimidation

“In New Jersey, what you had was you had off duty state and local law enforcement people outside the polls with guns, with walkie-talkies, with armbands, that were identifying themselves as being ballot security. You could have a repeat of that,” Greenbaum told Business Insider, adding that such intimidation tactics are likely to happen “particularly in an election that’s as charged as this one â€” and in a country that’s charged as it is right now.”

While it’s a federal violation to participate in voter intimidation of any kind, voter suppression remains a concern for historically disenfranchised communities.

When reached for comment, Trump 2020 General Counsel Matthew Morgan told Business Insider that “Republicans are committed to making sure the polls are being run correctly, securely, and transparently to deliver the free and fair election Americans deserve.”

Voting-rights groups remain on alert, watching for threats and actions like sending law enforcement to voting sites that could signal the potential for voter intimidation and suppression.

If officers are placed at polling sites this November, just as they were in 1981, “one of the things that we would do is go to court,” Greenbaum said.

There’s also concern that the RNC might once again engage in tactics like this. When the decree came to an end in 2018, experts warned that Trump could try to push RNC officials into deploying law enforcement officers to the polls for him.

“If he tries to use the RNC in this activity, there’s now nothing under this consent decree that would stop him,” said Richard Hasen, an election law expert from the University of California, Irvine, in a 2018 interview with NPR. “And so I do think to the extent that Trump controls the RNC, we may see more activities aimed at so-called ballot security, which could be seen as suppressing the votes of minority voters.”

The Trump campaign privately acknowledged in November that the end of the 1982 decree was “a huge, huge, huge, huge deal” for Republicans and for the president.

The RNC has already put together a $US20 million plan that pays for up to 50,000 volunteers to surveil voters and polling sites in 15 crucial states. These volunteers are tasked with disputing what they consider suspicious voters or ballots.

Mandi Merritt, national press secretary at the RNC, said in a statement to Business Insider that Republicans are focused on “getting more people to vote, certainly not less.”

“Now that the playing field has been leveled, we can do what Democrats and other Republican groups have been able to do for decades: ensure that all votes are counted properly and that more people can vote through our unmatched field program,” Merritt said.

When reached for comment, a DNC official detailed to Business Insider various practices the organisation has in place to stay on top of voter intimidation tactics. The group will have lawyers and volunteers present at polling sites around the country, for example, who will ensure that everyone who shows up to vote in person counts. The official also directed Business Insider to IWillVote.com, a website set up and paid for by the DNC that provides people in every state with information on how to make sure their vote counts in November.

The DNC will also train and deploy its own poll watchers with the goals of increasing voter turnout for Democratic candidates and keeping an eye out for any improper practices by Republicans.

Several states told Business Insider that there are no plans to deploy local law enforcement to polling sites in November. But at least five states said they have a law in place that allows them to do so.

If voters experience attempts at suppression or fraud, they can contact the Election Protection Hotline by calling 1-866-OUR-VOTE. 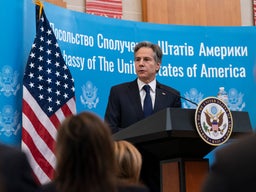