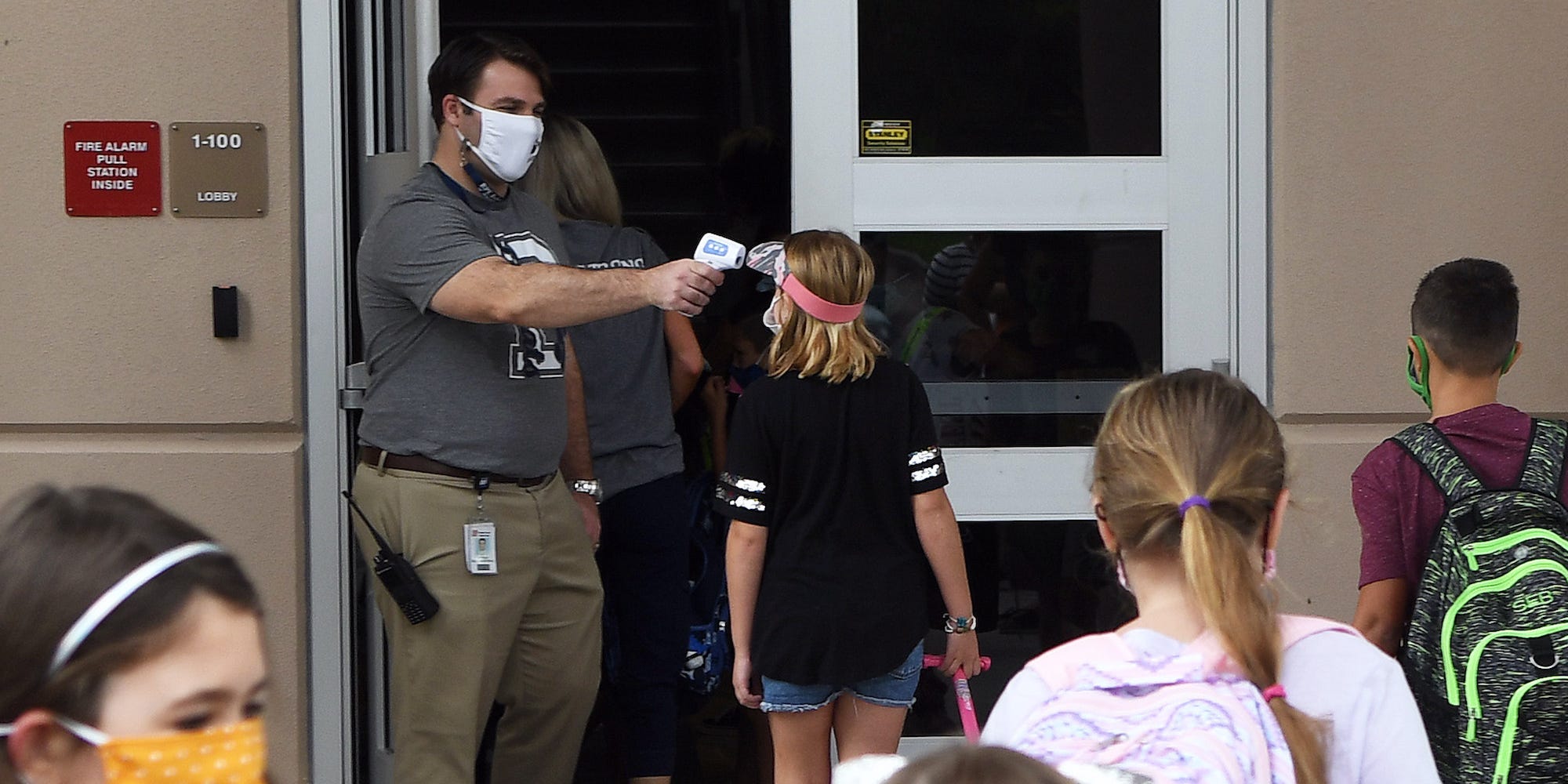 Photo by Paul Hennessy/NurPhoto via Getty ImagesPrincipal Nathan Hay checks the temperatures of students as they return to school on the first day of in-person classes in Orange County at Baldwin Park Elementary School on August 21, 2020 in Orlando, Florida, US. Face masks and temperature checks are required for all students as Florida’s death toll from COVID-19 now exceeds 10,000, with some teachers refusing to return to their classrooms due to health concerns.

The fifth-largest school district in the US introduces a plan to phase students back to in-person learning after a rise in student suicides even as COVID-19 cases in the region rise, The New York Times reported.

As of December, the Clark County school district in Las Vegas, Nevada had 18 student suicides compared to the nine suicides the district saw in the past year. The school district ranked the fifth largest in the country, according to data from the US Census Bureau.

“When we started to see the uptick in children taking their lives, we knew it wasn’t just the Covid numbers we need to look at anymore,” Jesus Jara, the Clark County superintendent, told the Times. “We have to find a way to put our hands on our kids, to see them, to look at them.”

“They have got to start seeing some movement, some hope,” Jara continued.

In a statement, the district said it would allow schools to bring back “high-need students” as soon as possible. Teachers and principals would determine who is in most need of in-person learning, and the process will be invite-only and voluntary.

Jara told the Times that the youngest student to died was nine years old. Another student left a note that said they nothing to look forward to.

Greta Massetti, who studies the effects of violence and trauma on children at the Centres for Disease Control and Prevention, told the Times that, with students being out of school, they were missing out on mental health resources that have since been limited.

“Without in-person instruction, there is a gap that is right now being unfilled,” Massetti said.

However, Clark County and other districts have looked to fill the gap of resources. After their sixth suicide in July, the district got the GoGuardian Beacon alert system which scans student writings on district-issued iPads for suicide risk. They got more than 3,000 alerts in the next few months.

By November, the district upgraded to 24-hour monitoring and tracked severe cases that were most likely to act on suicidal thoughts.

“I couldn’t sleep with my phone nearby anymore,” Jara said. “It was like a 24-hour reminder that we need to get our schools open.”

It’s hard to decisively link an increase in suicide rates to school closures and data on adolescent suicide rates for 2020 has yet to be compiled. However, a CDC study found that across the country between April and October of 2020 the percentage of emergency room visits that were for mental health reasons increased by 24% for those between the ages of 5-11 and 31% for those between the ages of 12-17.

In November, the district was able to intervene when a 12-year-old student searched up “how to make a noose” on a school-issued iPad, local news outlet KSNV reported.

The boy’s grandfather told the outlet that the student actually made one out of shoestrings and had it around his neck when his father found him after the school reached out.

“His parents asking, ‘what, why?'” he grandfather, only identified as Larry, told KSNV. “And really what are â€” the only things they got out of him was, ‘I miss my friends. I don’t have friends.'”

As part of his COVID-19 response effort, President Joe Biden announced that he wants to reopen most K-8 schools within his first 100 days.

A recent study found that kids who are attending school in-person are not at a high risk of getting sick from COVID-19 as long as they wear masks and social distance.

“We can teach our children in safe schools,” Biden said. “We can overcome the deadly virus.”