2 Y Combinator-backed startups are feuding over an ad campaign, and it's yet another example of how San Francisco startups compete in the city's ultra-crowded tech market 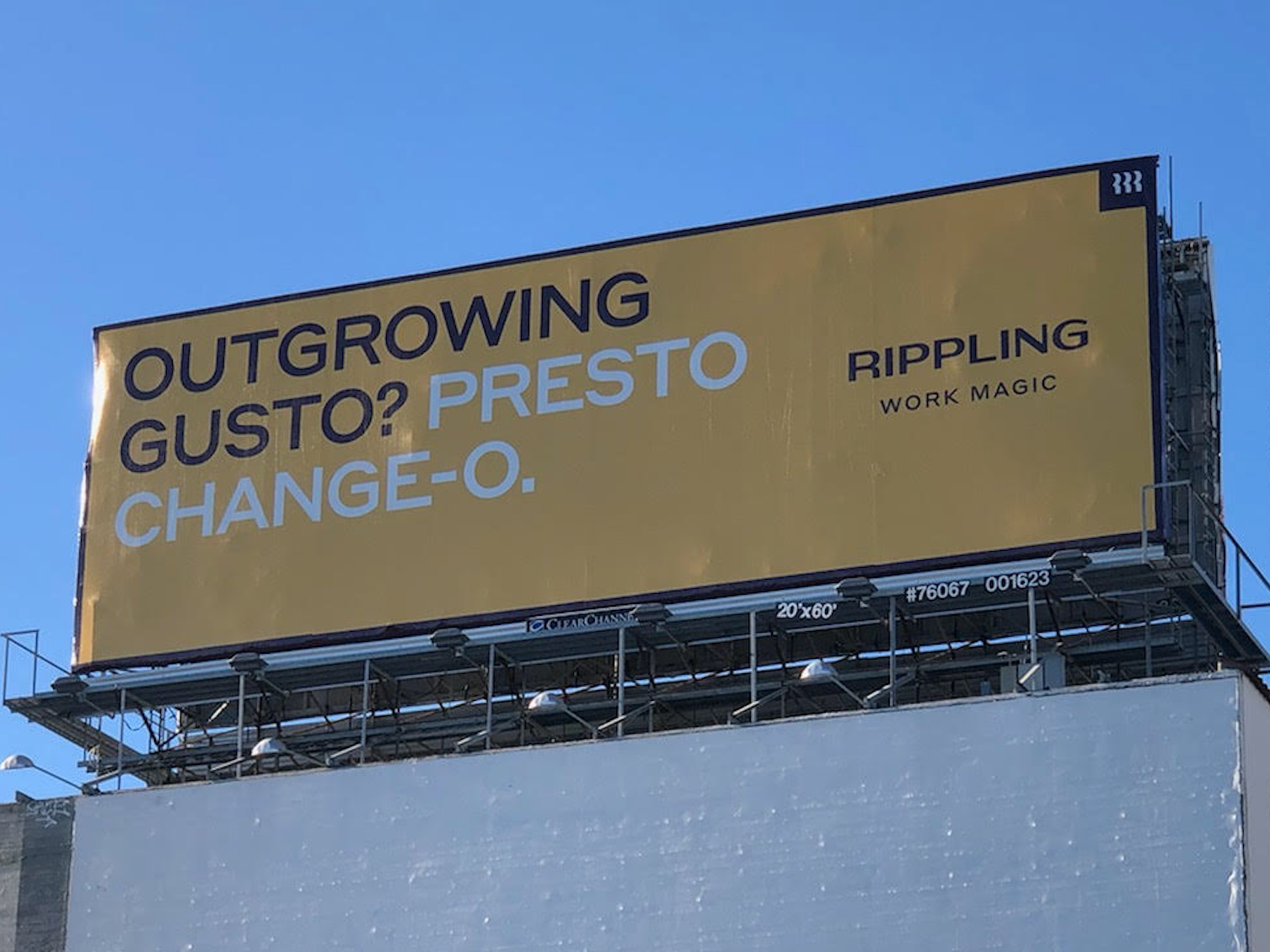 An ambitious onboarding startup pays for an ad on a San Francisco billboard targeting a competitor. The competitor, a tech unicorn valued at $US3.8 billion, writes a cease-and-desist letter. One Shakespeare-style poem and an internal email circulated later, and we’ve got a petty, 21st-century billboard battle on San Francisco’s Highway 101 that’s long been a battleground for such almighty tech startup squabbles.

Gusto, in what a company spokesperson told Business Insider is a standard business practice when a company’s trademark is used, notified Rippling by way of a cease-and-desist letter and ordered Rippling and billboard operator Clear Channel Outdoor to remove the billboard ad, as well as any similar advertising elsewhere, before Gusto takes legal action. Rippling called the legal threat “baseless” in an email to Business Insider.

The entire ordeal has become an example of how San Francisco startups can, and do, play the game in the region’s ultra-competitive tech market, using the city’s advertising real-estate as their gameboard.

Both Gusto and Rippling provide customers with human resources software. They’re both spawned from famed seed accelerator Y-Combinator and their services are a product of a market need for onboarding software that can easily integrate new employees into the many tools used by a company.

But, as Constine noted, Gusto has historically had more of a focus on small businesses. Rippling told Business Insider that the main reason why its customers made the switch from Gusto to Rippling is they outgrew the company and needed a platform more appropriate for a larger workforce. Gusto itself has scaled so much in recent years that its own software couldn’t support its staff – it transitioned to Workday, which a Gusto spokesperson confirmed to Business Insider.

In a statement to Business Insider, a Gusto spokesperson said that more than 100,000 businesses of varying sizes use Gusto nationwide.

“A core, but not exclusive focus, are small businesses, where we can serve as their broker for small group health insurance,” the spokesperson said in an email.

In Gusto’s cease-and-desist letter, it states that it “hopes Rippling can find a creative, lawful way” to continue advertising. In an internal email sent to Rippling staff and shared with Business Insider, CMO Matt Epstein said “the whole thing started to feel like an episode of Silicon Valley” – an HBO show depicting a strikingly accurate portrayal of startup culture in the region – and decided to respond to Gusto with a brash,“lighthearted” poem, which was also shared with Business Insider, instead of heeding the C&D order:

“Our billboard struck a nerve, it seems. And so you phoned your legal teams, who started shouting, ‘Cease!’ ‘Desist!’ and other threats too long to list.

Your brand is known for being chill. So this just seems like overkill. But since you think we’ve been unfair, we’d really like to clear the air:

In general, we think Gusto’s neat for Mum & Pop stores down the street. You handle small-batch tasks like pros-like payroll, HR, all of those.

But businesses are growing creatures, and as they scale they need more features. You know as well as us it’s true because it happened once to you.

When Gusto tried to scale itself, we saw what you took off the shelf. Your software fell a little short. You needed Workday for support. The truth is firms-both big and small-need power features for it all: Advanced reports for all locations, seamless Netsuite integrations.

We know it might sound like a flex, but we can handle the complex. In short, we help a business run-with HR, IT all-in-one.

So Gusto, do not fear our sign. Our mission and our goals align. Let’s keep this conflict dignified-and let the customers decide.”

Epstein told TechCrunch’s Constine that Rippling hopes “our lighthearted poem gets this debate back down to earth, and we look forward to competing in the marketplace.”

The billboard operator, not wanting to be caught in the middle of a legal hassle, took down the billboard last week. Rippling’s four other billboards, void of any jab at a competitor, are still on display. Katie Canales/Business InsiderOne of Rippling’s billboard ads without its targeting Gusto seen from a car in San Francisco’s SOMA district on Tuesday, February 19.

To be clear, Rippling’s method of marketing is what is called comparative advertising, which is typically legal as long as what is stated is accurate. 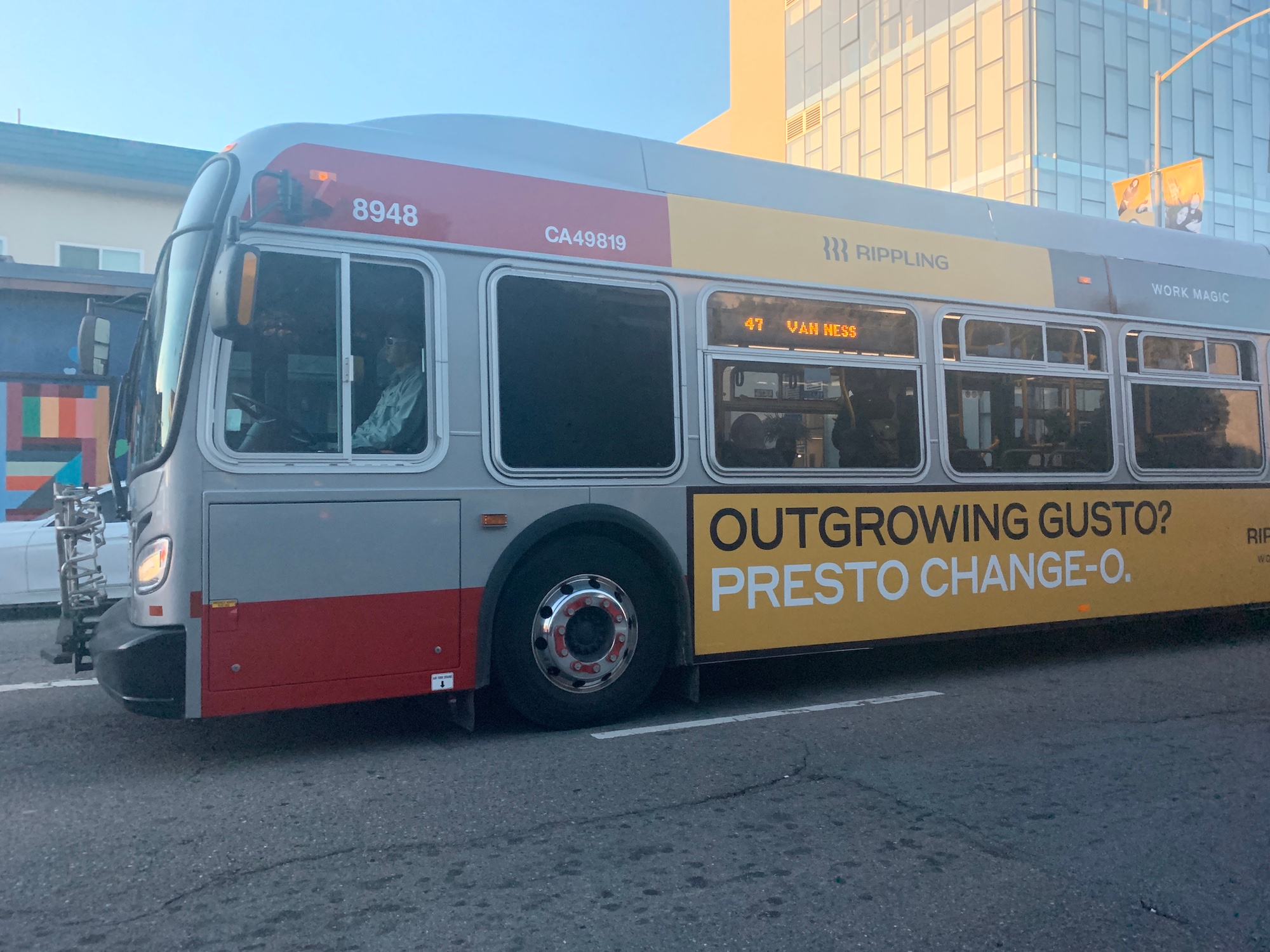 Katie Canales/Business InsiderA bus is seen with one of Rippling’s ads in San Francisco on Tuesday, February 19.

Other high-profile examples are Apple’s Mac vs. PC campaign or Bud Light attacking Coors Light and Miller Light for using corn syrup in its light beers.

Gusto’s reasoning, according to its cease-and-desist letter sent to Rippling which it shared with Business Insider, is that Rippling’s comparative ad is, in fact, factually inaccurate in its implication that a company can outgrow Gusto’s software and services, despite the fact that Gusto itself outgrew its own systems.

According to AdAge, these kinds of comparative ads appeal to consumers when it’s the underdog going after the “Goliath” of the two, even though Bud Light and other brands have broken this formula in the past.

Gusto, previously known as ZenPayroll, achieved unicorn status in 2015 when a round of funding pushed it over the $US1 billion valuation mark. It was valued at $US3.8 billion in July 2019, as Business Insider’s Ben Pimentel reported, and employs 1,300 workers across its San Francisco and Denver offices, according to a company spokesperson.

Rippling’s workforce sits at about 200 and has raised $US52 million, according to Crunchbase.It was valued at $US270 million in April 2019.

Gusto has avoided the oftentimes inescapably fratty company culture that’s common in the Valley, as Business Insider’s Melia Russell reported in 2018. The company operates out of an old machine warehouse in San Francisco’s Dogpatch neighbourhood, with its employees scuffling around barefoot or in socks or slippers thanks to a shoeless office policy.

Rippling is the brainchild of CEO Parker Conrad, who was ousted from HR software company Zenefits in 2016 when it was accused of selling insurance without a licence by state and federal regulators. Conrad agreed to a $US500,000 settlement with the SEC and did not admit or deny that the company violated federal securities laws.