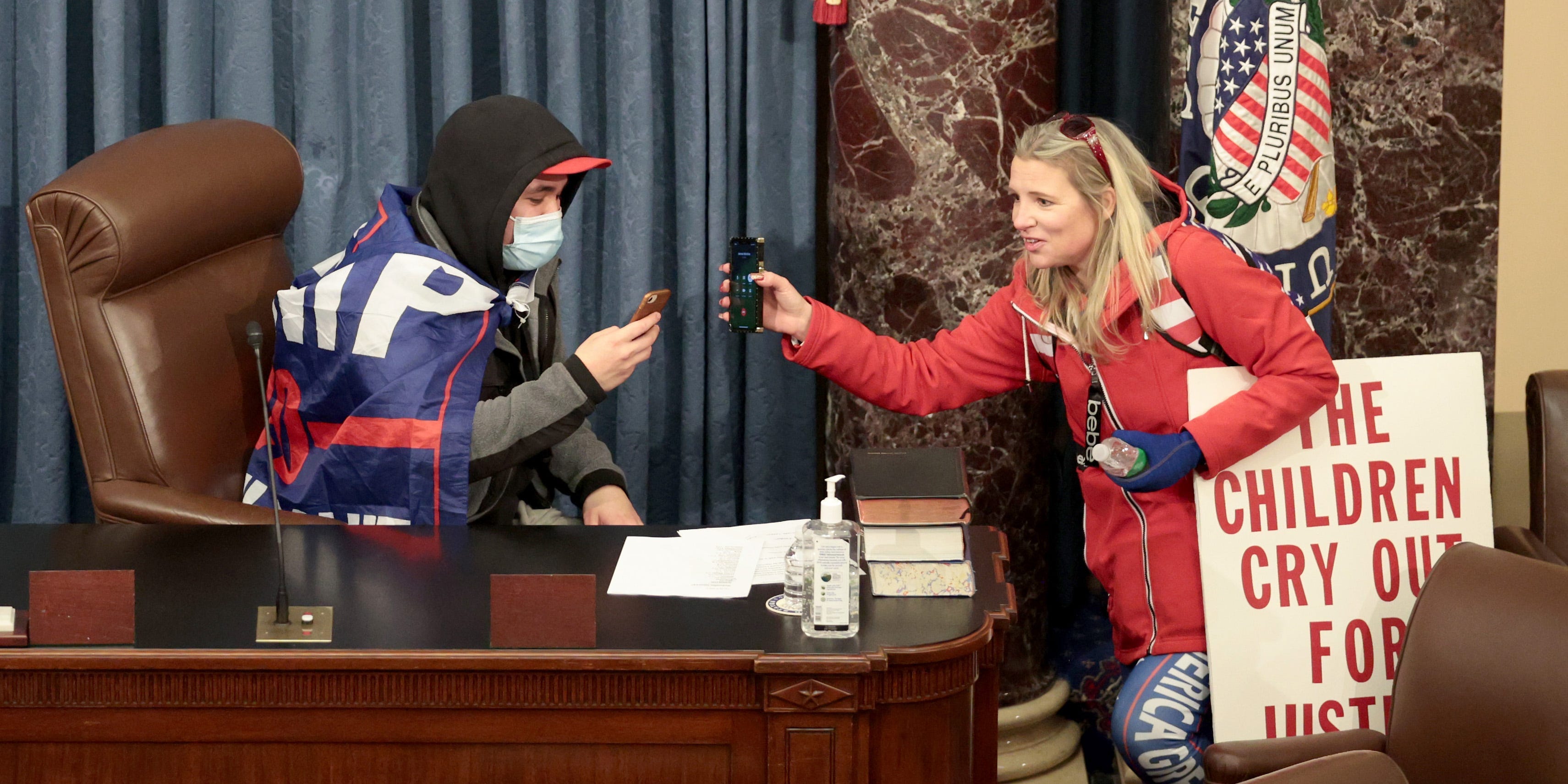 Vice President-elect Kamala Harris on December 29 tweeted that she and President-elect Joe Biden “will get to work in the first 100 days to ensure Americans mask up, distribute 100M shots, and get students safely back to school.”

Ashli Babbitt, a 35-year-old San Diego-area resident who spent 14 years in the Air Force, tweeted in response to this completely uncontroversial message: “No the f— you will not! No masks, no you, no Biden the kid raper, no vaccines…sit your fraudulent arse down…we the ppl b—-!”

Babbitt on Wednesday was killed by a Capitol Police officer’s bullet, as she tried to climb through a broken door pane in the Capitol. She was one of five people who died after Trump incited his supporters to storm the seat of America’s government.

Her vulgar, raging tweet at the Vice President-elect makes reference to no fewer than four conspiracy theories, including QAnon â€” which has been promoted by President Donald Trump and Republican members of Congress. A scroll through Babbit’s Twitter feed finds an inexhaustible supply of right-wing internet conspiracy theory content.

If not for internet conspiracy theories, Wednesday’s attempted coup at the Capitol wouldn’t have happened. They were the fuel. Trump was the match.

But this is only the beginning, because while Trump will be out of office soon, his movement is still enormous, violently angry, and dangerously misinformed.

The MAGA mob was a rogue’s gallery of right-wing conspiracy theorists, not antifa

And after years of supporting a president well-known for encouraging violence, delegitimizing the democratic process, and indulging in any number of fever swamp conspiracy theories, Trump’s MAGA mob finally showed America a glimpse of the revolution they have long promised.

QAnon true believers, Seth Rich truthers, literal neo-Nazis â€” they were all part of the deadly insurrection at the Capitol. And they all believe the conspiracy theory which Trump and his allies have spread: that there was widespread, multi-state election fraud which cost Trump his rightful reelection.

The Atlantic’s Jeffrey Goldberg reported from the insurrection that after “spending hours sponging up Trumpist paranoia, conspiracism, and cultishness,” that the attempted coup was “also a mass-delusion event, not something that can be explained adequately through the prism of politics. Its chaos was rooted in psychological and theological phenomena, intensified by eschatological anxiety.”

Even in the aftermath, supposedly “respectable” conservatives â€” Republicans unlikely to be found marauding through the halls of Congress with confederate flags and bear-skin vests â€” fanned conspiracy theories about the conspiracy theorists.

The mere suggestion that the MAGA mob was actually antifa is all the evidence many will need, despite the fact that numerous well-known QAnoners, white supremacists, neo-fascist Proud Boys, and even elected Republican state officials live-streamed their participation in the attempted coup.

There’s even a mountain of evidence that the rioters planned their attack, in plain sight on the internet, for weeks.

The “it was actually antifa” lie has been so successfully propagated that the well-known QAnon supporter known as Q Shaman (a.k.a Jake Angeli, a.k.a. the shirtless rioter in the viking hat) publicly complained about being called crypto-antifa by the pro-Trump lawyer Lin Wood.

The deadly, traitorous coup attempt may have finally put to rest a potential 2024 resurrection of Trump’s political fortunes. And it’s finally caused Republican leaders to put some daylight between themselves and the demagogue who permanently debased their party.

But the internet fever swamp conspiracy theories that have defined Trumpism aren’t going anywhere. They will continue to worm their way through otherwise intelligent and decent people’s brains.

And they will continue to stoke mob rage, which will inevitably turn violent again, probably soon. While there were only hundreds of rioters, the livestreamers among them allowed tens of thousands to feel like they were part of a revolution.

Conspiracy theorists tend to see three different kinds of people: The sheep. The enemy. And the heroes, the ones like themselves who are brave enough to see the world as it is. They believe they possess a secret truth, which is an empowering feeling.