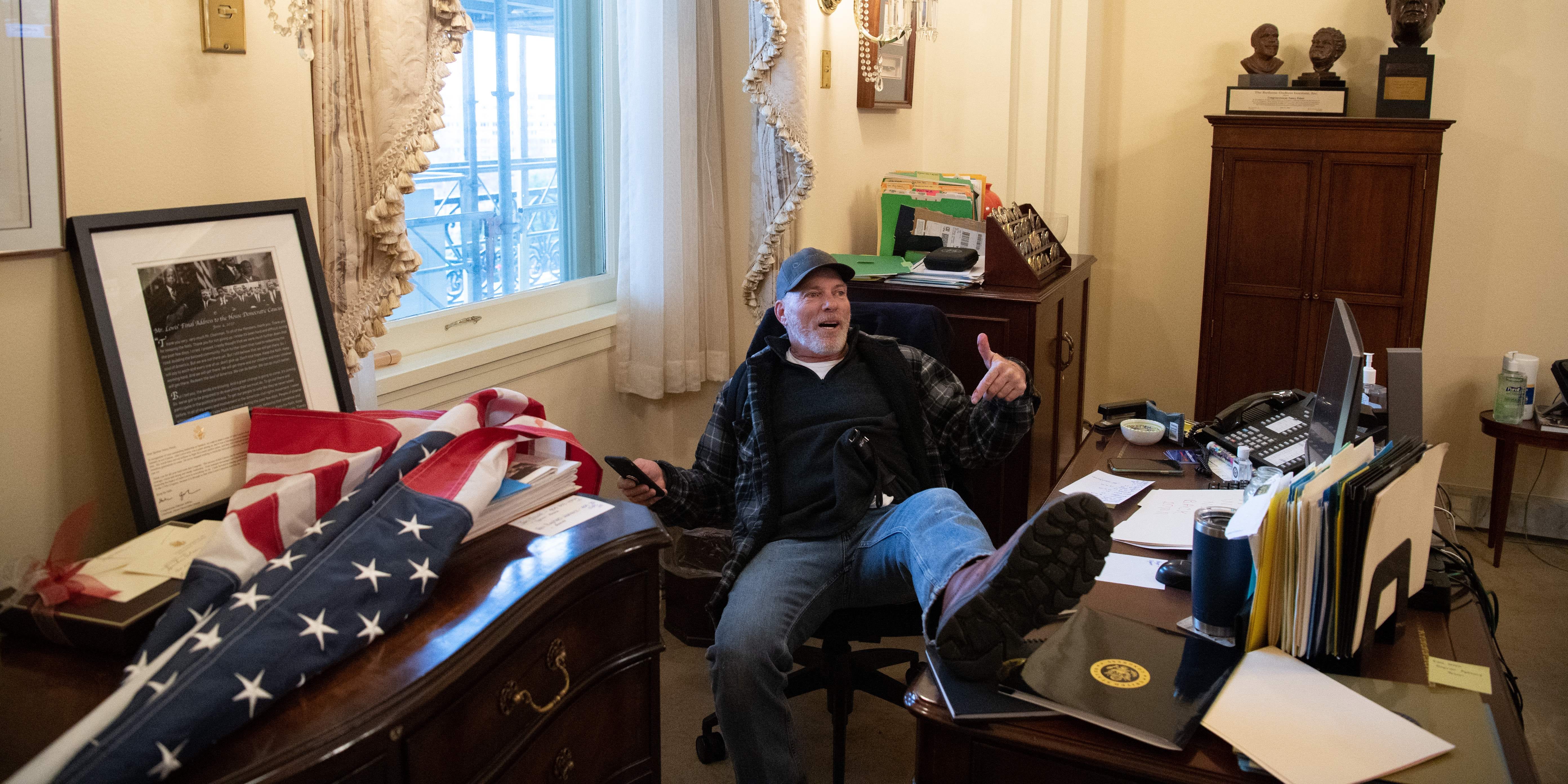 SAUL LOEB/AFP via Getty ImagesA supporter of US President Donald Trump sits in House Speaker Nancy Pelosi’s office during the riot at the US Capitol on Wednesday.

A man who was pictured sitting at House Speaker Nancy Pelosi’s desk as rioters who support President Donald Trump stormed the US Capitol building on Wednesday has been arrested.

Richard Barnett from Gravette, Arkansas, was arrested on Friday, the Department of Justice announced in a statement on Friday, in which officials also announced charges against 12 other people.

Barnett was arrested at his home in Little Rock, Arkansas, on charges of entering and remaining on restricted grounds, violent entry, and theft of public property. If convicted, he faces a year in prison.

Federal officials said he would be extradited to Washington, DC.

“The shocking images of Mr. Barnett with his boots up on a desk in the Speaker of the House’s office on Wednesday was repulsive,” Jeffrey A. Rosen, Acting Attorney General of the United States, said in a statement about Barnett’s arrest. “Those who are proven to have committed criminal acts during the storming of the Capitol will face justice.”

Days before the riot, Barnett had recently said he was a white nationalist who’s prepared for a violent death on a Facebook page he maintained under the pseudonym “George Reincarnated Patton” after the World War II general, The Washington Post reported.

“Now we have a term that fits me and many others and they try to turn it bad. I am white. There is no denying that. I am a nationalist. I put my nation first. So that makes me a white nationalist,” he said on Saturday, adding: “F—ing A we are nationalists. You aren’t? Then get the f— out of our nation.”

In a post from December, Barnett said he “came into this world kicking and screaming, covered in someone else’s blood” and that he was “not afraid to go out the same way,” The Post reported.

New: Richard "Bigo" Barnett, the pro-Trump rioter pictured yesterday in Nancy Pelosi's office, recently said on a pseudonymous FB account that he was a white nationalist and prepared for a violent death. https://t.co/RVW3159xNk pic.twitter.com/qAjrspkaEQ

Barnett, 60, who goes by “Bigo,” spoke to New York Times reporter Matthew Rosenberg outside the Capitol after he visited Pelosi’s desk.

He told Rosenberg that he took a personalised envelope that belonged to Pelosi and “left a quarter on her desk.”

“I didn’t steal it. I bled on it, because they were f—ing macing me and I couldn’t f—ing see,” Barnett said in a video that Rosenberg posted in Twitter. “And so I figure, well, I’m in her office, I got blood in her office, I’ll put a quarter on her desk, even though she ain’t f—ing worth it.”

Barnett also said he wrote her a “nasty note.” Photos showed a note on Pelosi’s desk that said “WE WILL NOT BACK DOWN.”

Barnett was quickly recognised by publications in Arkansas, including the Westside Eagle Observer, which reported that in October he raised more than $US1,000 for a “Save our Children” anti-trafficking campaign. The campaign has been propagated by followers of QAnon, a conspiracy-theory organisation that shares misinformation about child sex trafficking.

Barnett also attended a “Stop the Steal” rally in support of Trump in Arkansas in November, and he told KNWA, a local news station, that he believed voter fraud cost Trump the presidential election.

He told KNWA on Wednesday that he wasn’t arrested at the riot but was escorted out of the Capitol after being tear-gassed. He also said he and his family had received multiple threats.

The Capitol was secured on Wednesday night, and Congress completed its certification of President-elect Joe Biden’s victory over Trump.