NintendoHello! That is not a surprise!

It’s so good, in fact, that you should seriously consider buying a Nintendo Switch just to play it. Really!

Here are just a few reasons why “Super Mario Odyssey” is so great:

There’s so much more to say about “Odyssey,” so let’s dive in. I'm going to speak explicitly about 'Super Mario Odyssey,' including about its story and gameplay -- this is a review, after all. So, if you don't want anything spoiled, turn back!

'Super Mario Odyssey' doesn't waste your time with a bunch of needless backstory. Nintendo
These are the planners for Bowser and Peach's wedding. They're the henchmen of 'Odyssey.'

The premise of 'Odyssey' is delightfully quick and simple.

Mario's chronic nemesis, Bowser, has kidnapped his longtime love interest, Princess Peach, and is forcing her into marriage. Mario's not into that, which is seemingly why Bowser's doing it in the first place. He shreds Mario's hat and takes off in an airship. Typical!

But also whatever, right? How much motivation do you need to take out a villainous turtle dressed like a pimp?

Relax: All of this plot setup plays out quickly, and you can get on with the game in just a few minutes.

'Odyssey' jumps right into the action. After falling from Bowser's airship, Mario lands in a world ruled by ghosts shaped like hats -- a convenient twist given what Bowser just did to his cap. One such ghost hat, named Cappy, befriends Mario and offers to team up on a mission to save their respective significant others. Mario dons Cappy, and they go on their way.

Cappy is the key new element at the heart of 'Odyssey.' Mario can use Cappy to capture and control various things, both living and not.

You can start throwing around Cappy and controlling other characters and objects pretty much immediately. Before I fought a boss or even found the Odyssey, the all-important airship Mario uses to travel from kingdom to kingdom, I'd captured a frog and done some insane things.

Playing as captured characters and objects is more than just a novelty. Nintendo
Mario goes through a kind of metaphysical tunnel when he 'captures' something with his hat. It's weird!

The world of 'Odyssey,' like that of 'Super Mario 64' before it, contains a mix of friendly and hostile characters -- and some that are seemingly neither, such as frogs. Indeed the frog exists just to be captured so Mario can jump super high.

Playing as the frog above, I leaped massive heights. I remembered areas I couldn't reach previously and retraced my path to find hidden items. I spent time acclimating to how different it felt to play the game as a frog rather than as Mario.

This capture ability means you can play as literally dozens of different characters. That's no small feat, and -- more importantly -- it's a huge change to how Mario traditionally has worked. In 'Odyssey' there are no power-ups that give Mario himself new abilities, but each of the dozens of things he can become offers its own unique capabilities.

Playing as those different things is a ton of fun. It's also crucial for solving the game's many puzzles.

Using Cappy to capture things is a key skill to learn and practice. Nintendo
Here's an absurdly tall stack of Goombas I made in order to reach some coins.

Much of what you know from playing Mario games in the past you're going to have to set aside when playing 'Odyssey.'

Early on while playing the game, I found myself trying to figure out how to use Mario's primary skill -- being able to jump in lots of different ways -- to solve various puzzles. As it turns out, that's almost never the way to go.

Instead, follow this rule: When in doubt, throw your hat.

It's astounding how quick I was to forget that I should just use Cappy. Not only can you use the throwable ghost hat to capture things, but you can also use it as an extra platform or to collect hard-to-reach coins -- and a whole lot more.

You can throw Cappy to bust open boxes or to push back enemies. You can throw it to leap over a chasm, using Cappy as a springboard suspended in mid-air. The super-capable ghost hat is a key tool that fits into Mario's usual collection with surprising ease.

In one of the game's first few kingdoms, or areas, I used Cappy to take over Bullet Bills -- bad guys in the shape of bullets -- and navigate all sorts of places I couldn't go with just Mario's usual moves.

It can sometimes be a bit hard to see what's going on when you're controlling non-Mario characters, because the viewing angles can get kind of wacky. But that's a small price to pay for the ability to fly around as a long-standing enemy of Mario.

And you can take control of other bad guys, not just Bullet Bills. This flying Goomba, for example, was more than happy to be captured in one of the game's many side areas.

The game is gigantic. Upon landing in each kingdom, I was overwhelmed by all the stuff I could do. A dozen different paths immediately drew my attention, and it was hard to know where to go first.

Since this is a Mario game, you don't need to acquire special powers to get anywhere. You can access or solve everything you see as soon as you land in a kingdom.

In this way, 'Odyssey' follows the structure of 'Super Mario 64' almost exactly. You're given a big open world with a set number of items to collect. There are few limitations on what you can do or where you can go other than a handful of doors that won't open until certain conditions are met.

In each kingdom, the goal is to collect Power Moons (the 'Odyssey' equivalent 'Super Mario 64's' stars). The moons provide power for your ship, the Odyssey, and you have to collect a certain number in each kingdom to go from it to the next kingdom.

The moons are all over the place. Acquiring them can be as simple as reaching the top of a building or as difficult as defeating a boss.

Each kingdom offers a different number of moons you can collect. Tostarena, in the Sand Kingdom, has a whopping 69, while Bonneton, in the Cap Kingdom, has fewer than 20. But even that number is still plenty considering that at least a dozen of those moons are challenging to collect.

The game's smartly paced, but gives completists freedom to go at their own speed. 'Odyssey' has a well-paced narrative path that showcases the game's breadth of gameplay and art styles. You can have a lot of fun following that path, collect just the requisite number of moons you need to allow your ship to move on to the next kingdom so you can chase down Bowser and his wedding-planning goons.

But it's hard to resist deviating from that path and trying to collect all the moons, purple coins, and other stuff you can find in the game and exploring its various areas. Though the kingdoms vary in size from tiny to gigantic, all of them are full of hidden treasures.

Fortunately, the game doesn't push you down its narrative path. If you want to stick around in a particular kingdom and collect as much as you'd like, you can.

I did plenty of side exploring while playing 'Odyssey' and even went back and re-visited several kingdoms along the way. 'Super Mario Odyssey' is filled with hidden items, fun mysteries, and cool things to explore pretty much everywhere you look.

Is that a little 8-bit drawing hidden on the wall over there? Why is everything in the desert frozen? And what in the world is this rocket doing here?

From the big to the small, the world of 'Odyssey' is full of curiosities you can dig into. Even after playing for two dozen hours or so, I've barely started to figure out what's what.

And that's the best part about 'Odyssey.' It's a game full of charming puzzles. It's a lot of fun exploring and trying to understand them.

Best of all, 'Odyssey' is smart. Nintendo
The kingdoms in 'Odyssey' are full of areas like this, which require you to use Mario's capture ability and do some very careful manoeuvring.

Every piece of 'Odyssey' feels intricately made.

An example I keep coming back to is how the game intentionally misleads you into thinking that the direction you're heading in is the 'right' way to go. And almost every time, if you turn around and go the other direction, you'll find hidden items and features, from the simple to the ridiculously complex.

One hidden feature you might have missed could be a pipe leading to one of dozens of side areas:

These hidden features might take you to a side area where you can play in a two-dimensional 8-bit world that looks like a hidden level from the original 'Super Mario Bros.' game (above). Other pipes lead to elaborate side areas that require precision and skill to complete. And those secret areas are often filled with their own secrets, layered one on top of the other like nesting Matryoshka dolls.

With these hidden and side areas, 'Odyssey' smartly offers players extra challenges in a way that feels natural, not tacked on.

Mario's ridiculous outfits in the game are a lot of fun. So too is playing as dozens of characters while navigating the game's various fanciful kingdoms. But it's this level of detail paired with smart design that makes playing 'Odyssey' such a delight.

'Super Mario Odyssey' is available now for $60 on the Nintendo Switch. 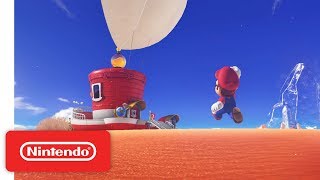 Check out the latest trailer!